"It's a stoner record for non-stoners": Kim Gordon and Bill Nace break down Body/Head's "The Switch" 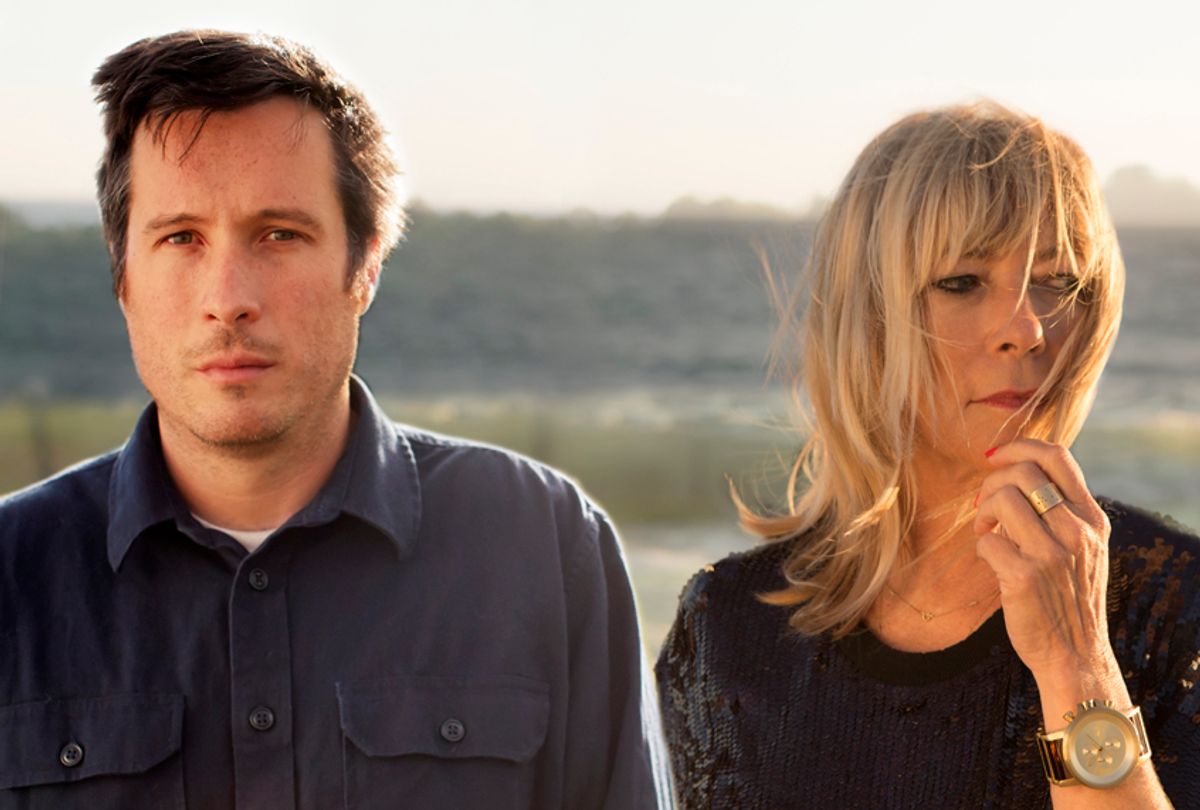 On their second full-length, "The Switch," Body/Head — the experimental duo bringing together improvisational experts Kim Gordon and Bill Nace — favors a creative process that's almost primal. Coming five years after their debut album, 2013's "Coming Apart," the sprawling five-song album came together mostly in the studio, when the musicians gathered for intense creative sessions. The resulting music has the texture of viscous concrete being poured into place: Gordon's chalky, dusky vocals intertwine with splintering, gravelly guitars, distortion-frizzled drone, and moments of yawning silence. It's an album heavy with dread, but one that's also deeply melancholic and restless.

In conversation, Gordon and Nace are thoughtful and economical, and feed off of each other's ideas as they dissect Body/Head's music and process; their minds are clearly always whirring in the background, finding connections between thoughts and observations. Appropriately, conversations aren't always linear. For example, when the pair moves on to discuss the ways their individual contributions coalesce within Body/Head, it leads to intriguing talk about the sonic progressions that happen during their live shows and beyond.

"[The song will] break down, and it'll be two loops going against each other, or one loop and Kim playing really repetitively," Nace says. "It's just how psychedelic it can get when you have two really simple elements just keep going against each other. It starts to unfold differently, even though it's obviously the same thing every time."

"I think this is kind of a real stoner record," Gordon responds, switching gears and referencing "The Switch."

Nace agrees with that assessment — but then as both musicians go on to clarify that they're not stoners, he asserts, "It's a stoner record for non-stoners."

Salon spoke with Gordon and Nace during the same phone call about the genesis of "The Switch"; the former called from California, and the latter dialed in from Philadelphia.

What made recording this album a different experience from making "Coming Apart"?

Kim Gordon: Mostly where we are in our lives. And all the gigs in between recording then and now all went into the recording.

Bill Nace: Yeah, we were a new band when we made that one, so there's been three or four years of shows in between.

That's what I was going to ask: How did doing so many shows influence the way you approached this record?

Gordon: I guess we kind of feel, I don't know, more cemented in our relationship musically. I feel more confident as a guitar player.

How did everything get started as you went into the studio? How long did it take? How did you get in the mindset?

Nace: I think when Kim and I live together, we can like — you know, we'll just go down in the basement and play, or we're always talking about music. We're still in touch all the time, but this one we haven't lived in the same town for the first time. So we decided, "OK, it's time to work on something new," but it was also really circumstantial too: "When are we in the same place? When can we get the studio?"

And because it's such a limited time, you really have to focus and be committed to what you're making in the present — just being like, "This is the material that we're going to have to work with." Which is different — but it's cool. It's a good kind of pressure that's on it where you really have to be all in, which I thought was a cool way to work.

Gordon: We recorded for a couple of days, and then a few months later got back together and shaped the things we liked that we had done.

READ MORE: The secret to Jim James’ solo album “Uniform Distortion”: “Turn off your phone and open your heart”

When you went back to the music, what really stood out to you? What were your thoughts after you let it settle for a while?

Nace: I was really trying to like play as [few] notes as possible. It's way more — streamlined is kind of a corny word, but it feels tighter than the first record to me. More dense. Like the first record, every song feels like its own world . . .

Nace: Where [with] this, all the songs go together to make a world up. Even the one song that got released off the record ["You Don't Need"], it was weird for me to hear it out of [context]. To me, there's a cumulative effect with listening to all of them, whereas [with] the last one you could dip in wherever. I think you could even change the order around on it, and it would still kind of work. And especially because some of those songs are so long. But this one to me feels like it has to be listened to from start to finish, in my mind.

I noticed that as I was listening to it. It's like a play almost: There's a buildup and there's crests and there's a denouement. It ebbs and flows in a very cohesive, logical way.

Gordon: It's funny how something can not sound like a record — it can just be a bunch of songs — and then if you get the right order, it just fits like a whole.

Nace: We actually really labored over the order on "Coming Apart." We really did spend a lot of time on ordering that. More in retrospect, looking back, that I'm saying that. At the time we really did work on the order for that pretty hard. But going back it feels different.

And sequencing is so important — it makes all the difference. A record can just sound totally different if things are out of order or in a different order.

Gordon: I think my favorite part of making a record is finding the right order. [Laughs.] It's like a puzzle you have to solve.

Nace: Totally. Kim, you listen to stuff on the computer a little more than I do. If you put a record on, does it ever just shuffle the order of the songs?

Gordon: It just depends. If I have a whole record, I'll listen to it the way it's presented to me. But there are a few, like a friend's music — I don't know, I got their songs haphazardly, so I actually haven't listened to things as a whole.

So much of it is about context too. If you hear a song in the wild, and it's devoid of the rest of the tracks on a record, you'll have such a different perspective on it when you go to listen to it — if you stream it, or if you even hear it in context with the record. It's an interesting phenomenon.

Nace: I think it's cool. Like I think it's cool that listening on the computer can have it be more of like a mixtape approach. I think it can really recontextualize how you hear songs. But I do think that possibly on the other end of that is — the art of sequencing a record, maybe isn't paid attention to as much as it used to be.

Bill, what really stood out to you about Kim's playing this time around as you guys were putting the music together?

Nace: She just kinda killed it in the studio. The first record was more of a reflection of, in a sense, how the shows work, where the dynamic really switches pretty fluidly between . . . There's usually not a lead player. It's switching back and forth so much. But I do think Kim's more of like the lead on this record, the way she's playing, and then I'm trying to frame that or push it around a little. But, yeah, I just thought it sounded really great and heavy.

Gordon: I can't really tell who's playing what. [Laughs.]

Gordon: It's almost like Bill reaches into my brain and is like, "Put the tremolo pedal on."

Kim, what did you really like about Bill's playing? What really stood out to you this time around?

Gordon: Well, like I said, I really can't tell. [Laughs.]

Gordon: No, I'm not kidding. I don't know — I could if I really sat down. I like to have enough distance that I'm discussing the musicality of it.

Gordon: I just figure that whatever is playing, it's awesome.

Sometimes you don't question it.

Gordon: I don't question that ever. Ever.

Did you guys have any sort of artistic or musical influences or things that you were listening to you as you were making the record that you feel maybe seeped into the album at all?

Nace: For me, definitely. We are always talking about what we're listening to, and it's been a lot of the same stuff over the years and then new stuff. We went in the studio either the day after, or two days after, I had watched the last episode of the new "Twin Peaks" season, which totally blew my mind. Not to say I was trying to do anything that referenced anything conscious like that, but I was definitely very much in that headspace that really kind of stuck with me for a long time. That comes to mind more than any record or anything that I'd been listening to.

Gordon: Every now and then I'll listen to this old My Bloody Valentine record, and I had this new deep fuzz pedal that was kind of inspiring me. [Laughs.] I don't know — I'm amazed at the layers of how actually hard it is to make a record sound like that. But I wasn't really consciously thinking of anything.

Nace: What comes out a lot when we record is more like moods — like a movie we just watched, or the feeling of a record — more than musical signifiers.

Gordon: If I get too self-conscious about what I'm playing, or about to play, it's not helpful. It's easier if I remove it [by] thinking of an image or . . .

That makes sense. When you listen to a piece of art that's transformative, or you watch a TV show that's transformative, it does sort of rearrange your DNA and or thought processes at least for a little bit. Especially something like "Twin Peaks," which is so brain-bending — it inspires your creativity or sparks different things.

Nace: Right, and it's a cool, dual thing. You like it, it has an effect on you, so you really want to go in and try to pick it apart and see why. It's a cool process to interact with anything that way. But then it also never totally adds up. There's always something about the total overall effect of it that you can't really pick it apart — or maybe I just don't want to.