The weird and wonderful world of fish

A new book tells tales of the life aquatic 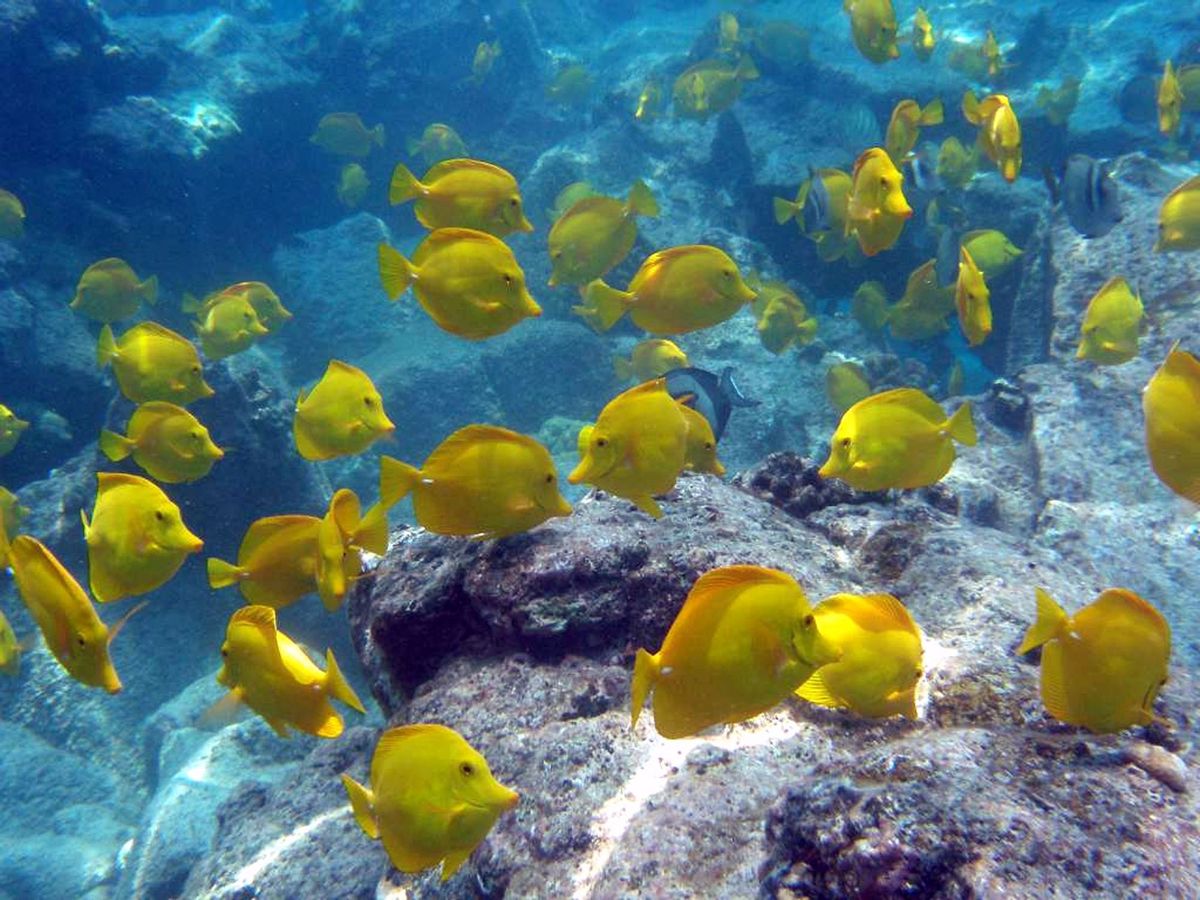 File-This undated file photo from Oregon State University shows a school of yellow tang off the coast of Hawaii. The waters off the Hawaiis largest island are home to a half-million brightly-colored tropic fish that are scooped up into nets each year and flown across the globe into aquariums from Berlin to Boston. Scientists say the aquarium fishery off the Big Island is among the best managed in the world, but it has nevertheless become the focus of a fight over whether its ever appropriate to remove fish from reefs for people to look at and enjoy. (AP Photo/Oregon State University, Bill Walsh,File) NO SALES (AP Photo/Oregon State University, Bill Walsh,File)
--

For many of us, fish are indistinct, glimmering shapes in the deep. We know there are many types of fish, and that some of them are tasty and some are not, but we don’t know many of their names or habits. Fish, with their spherical lenses and unblinking eyes, see the world very differently than we do. In her new book, writer, marine biologist, and broadcaster Helen Scales brings this underwater point of view with all its drama, storylines, scripts, and characters, into sharp focus.

"Eye of the Shoal: A Fishwatcher’s Guide to Life, the Ocean and Everything," now out in the US, is a carefully-crafted love letter to all fish. With an expert, fish-eye view, Scales sketches out the strange and compelling world of her scaly friends (no relation), and highlights the drama and charisma of these slimy, cold, and sometimes delicious creatures.

Each chapter represents an episode in the soap opera that is "The Life Aquatic." Some chapters cover relatively familiar ground — “Anatomy of a Shoal” investigates how and why many fish live in groups (shoals), and “Fish Food” focuses what and how they eat. Other chapters, like “Fish Symphonises” and “Illuminations,” are more surprising: did you know that many fish vocalize and sing to each other, and that many others glow and flash like fireflies? The very best chapters, like “Outrageous Acts of Color,” are a mix of world-building and detailed explanations - fish come in a rainbow of colors, but often their gaudy scales are meant to blend in, not stand out. Bright red, not deep blue or black, for example, is the perfect camouflage in the deep sea because light behaves very differently in water than it does in air.

Throughout the book, fish take on a variety of new and surprisingly roles as we peek into their daily lives and are treated to glimpses of the world beneath the waves. Sometimes they go on grand, ocean-spanning adventures. Others, like medieval assassins crouched in the shadows, have spent thousands of years co-opting a bacterial neurotoxin more poisonous than cyanide (with close to 3,000 amateur apothecaries among them, fish are the most venomous of all vertebrates). In other scenes, we watch young bachelors pull out all the stops to try and convince a nice lady fish to settle down with them and raise a family. Fish, contrary to conventional wisdom, are clever, colorful, ebullient, and thoughtful animals.

While the innumerable fish, each with their own quirks, are undoubtedly center stage, they’re backed by a rich cast of human supporting characters. We meet devoted fish-watchers, like Konrad Lorenz, who spent his 1973 Nobel Prize winnings on building an enormous fish tank in his home, or Eugenie Clark, the “Shark Lady,” who in the 1940s showed that sharks were not mindless killing machines, and doggedly continued to dive well into her 90s. We also meet naturalists and scientists on the forefront of discovery, like John Budgett, who suffered through four grueling expeditions to swampy, mosquito-infested places — succumbing to malaria on the day he was to present his findings in London — to figure out whether strange, air-breathing creatures known as bichirs were fish or frogs. Nowadays we are absolutely certain that bichirs are fish, and are even using them to understand how fish may have first ventured onto land.

This is Scales’ latest book, following on the heels of "Spirals in Time," a biography of seashells and the animals that make them. She weaves bits and pieces of herself into each chapter, and draws upon her experiences as an avid scuba diver, surfer, and scientist to add context, analysis, and reflection to the prose. One poignant anecdote describes a three-month field season in northern Borneo where she documented the spawning behavior of the endangered Humphead Wrasse, getting to know them on an individual level. She muses how since the study ended, the reef has changed drastically, and the wrasse have long since disappeared from the site. China has ramped up construction projects and military presence in the area. She still wonders if her presence on the reef had tipped off local fisherman.

Scales’ prose drips, and sometimes gushes, with enthusiasm, and keeps an excited, steady rhythm. It’s easy for me to relate - I’ve been studying, and routinely surprised by, fish for years. So perhaps her enthusiasm does a bit of preaching to the choir. But I think the unconverted will find her believable too as she deftly weaves biography, fact, and story to bring light to the unique and surprisingly lives of fish.