Exclusive: "Under Trump, the government is worse than it has been before," Jimmy Carter says

Exactly 39 years ago, President Jimmy Carter delivered a speech that foresaw many of the problems America faces now 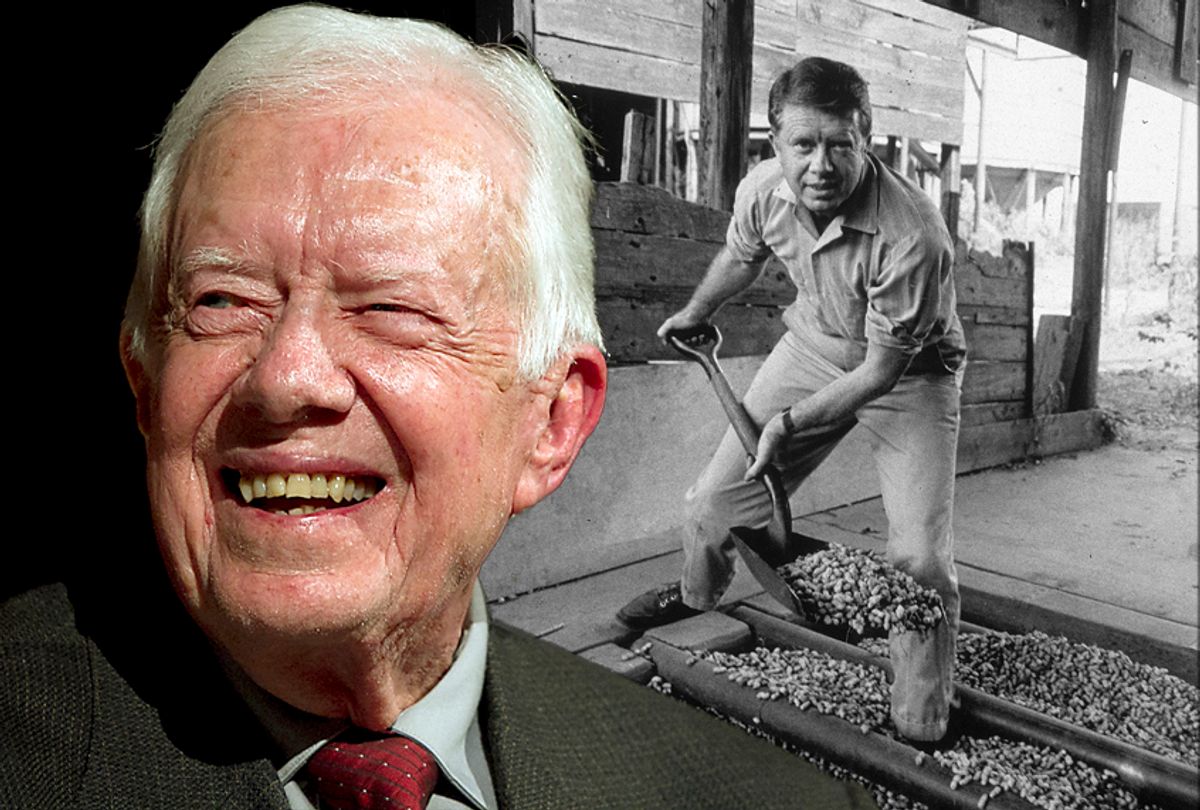 When speaking with Salon about his famous "Crisis of Confidence" speech, former President Jimmy Carter had this observation about America's current commander-in-chief, Donald Trump.

"I think that under Trump the government is worse than it has been before," Carter explained by email. "This is the first time I remember when the truth is ignored, allies are deliberately aggravated, China, Europe, Mexico and Canada are hurt economically and have to hurt us in response, Americans see the future worse than the present, and immigrants are treated cruelly."

This was probably Carter's most headline-worthy observation, but it is not the one for which he most deserves to be remembered. For that, one must look back 39 years ago — in fact, exactly 39 years ago, right down to the day — when Carter sat in front of the American people and told them that the country suffered from a crisis of confidence.

It was 10 days after Carter had been scheduled to deliver yet another speech on the energy crisis that had paralyzed the nation's economic life in the 1970s. Shortly before he was supposed to deliver that address, the president realized that the issues facing the country were much deeper than those to be found at their local gas stations. He cancelled his speech and, as he later put it, "invited to Camp David people from almost every segment of our society — business and labor, teachers and preachers, governors, mayors, and private citizens."

When he was done reaching out to the American people for advice and wisdom, he went before them to discuss what he had learned. Hence the "Crisis of Confidence" speech was born.

There are many sections of this speech that hold up today, ranking it among the finest presidential oratory ever delivered. Near the beginning, when Carter anonymously quotes the people with whom he discussed America's problems (including a "Southern governor" named Bill Clinton), he includes observations that feel more heartfelt and insightful than the standard platitudes one finds in political rhetoric. As he warms to his subject, he makes it clear that while he believes he has only had "mixed success" as a president (an assessment that I have argued was far too tough on himself), he also recognizes there is a deeper problem afflicting the American people.

Then came the passage — the one in which he described America's "crisis of confidence" — that is so powerful, so poignant, that it needs to be quoted in full.

Our people are losing that faith, not only in government itself but in the ability as citizens to serve as the ultimate rulers and shapers of our democracy. As a people we know our past and we are proud of it. Our progress has been part of the living history of America, even the world. We always believed that we were part of a great movement of humanity itself called democracy, involved in the search for freedom; and that belief has always strengthened us in our purpose. But just as we are losing our confidence in the future, we are also beginning to close the door on our past.

In a nation that was proud of hard work, strong families, close-knit communities, and our faith in God, too many of us now tend to worship self-indulgence and consumption. Human identity is no longer defined by what one does, but by what one owns. But we've discovered that owning things and consuming things does not satisfy our longing for meaning. We've learned that piling up material goods cannot fill the emptiness of lives which have no confidence or purpose.

The symptoms of this crisis of the American spirit are all around us. For the first time in the history of our country a majority of our people believe that the next five years will be worse than the past five years. Two-thirds of our people do not even vote. The productivity of American workers is actually dropping, and the willingness of Americans to save for the future has fallen below that of all other people in the Western world.

As you know, there is a growing disrespect for government and for churches and for schools, the news media, and other institutions. This is not a message of happiness or reassurance, but it is the truth and it is a warning.

"We still have the same crises of that time, plus a serious loss of faith in democracy, the truth, treating all people as equals, each generation believing life would be better, America has a good system of justice, etc.," Carter explained by email. There was one section of his old address that seemed to particularly catch his attention:

What you see too often in Washington and elsewhere around the country is a system of government that seems incapable of action. You see a Congress twisted and pulled in every direction by hundreds of well-financed and powerful special interests.

"This is much worse than when I gave the speech," Carter wrote to me.

There was an additional passage (coming before the longer one quoted above) which, when cited to him, caused him to recommend his recent book "Faith: A Journey for All." If you are a spiritual person who tries to avoid theological dogma but still yearns for the ability to feel hope for the future as well as a connection to the past, it is a book absolutely worth reading. For as both that book and this "Crisis of Confidence" passage that Carter connected to that text explain, faith is the glue that holds our society together. It is a quality that transcends ideological content or partisan labels; indeed, it is one that Americans absolutely must possess, and at all times, if we are to function in a healthy way as a democracy.

Confidence in the future has supported everything else — public institutions and private enterprise, our own families, and the very Constitution of the United States. Confidence has defined our course and has served as a link between generations. We've always believed in something called progress. We've always had a faith that the days of our children would be better than our own. Our people are losing that faith — not only in government itself, but in the ability as citizens to serve as the ultimate rulers and shapers of our democracy.

If you read most history books that discuss the "Crisis of Confidence" speech, it is described as a political failure, one that worsened Carter's public image and contributed to his ultimate defeat at the hands of Republican candidate Ronald Reagan in the 1980 presidential election. The fact that Carter's approval ratings actually went up after the speech, and only plummeted when he fired several members of his administration afterward in a move that struck many as capricious, has long been forgotten.

Perhaps in the upbeat 1980s — an era in which Reagan would get reelected by proclaiming it was "Morning in America" — Carter's message of a nation in need of spiritual mending was simply out of sync. Or maybe, as I discussed with Stuart Eizenstat during my interview with him in May, Americans are so obsessed with "winning" that they cannot imagine that the words of a one-term president could possess more depth than the entire rhetoric oeuvre of the two-termer who defeated him.

Either way, I'd like to close this article on a personal note. I include in full both the question that I asked Carter and the reply he gave, which speaks for itself on many, many levels.

Rozsa: "I'd like to start on a personal note: When I was an undergraduate at Bard College, I wrote my senior thesis about your Crisis of Confidence speech, both because I was inspired by the text and because I was inspired by how you urged policies based on empathy when you were president (I am autistic, something I recently discussed with "Sesame Street" — and your work for the rights of the disabled especially meant a lot to me personally). I have also spoken with many other young Americans who view you as one of the great humanitarian leaders of our time and have been moved by your substantial achievements as president, as well as by your post-presidential career. What advice would you give us as we proceed with our own futures and try to continue your legacy?"

Carter: "Never give up, and follow the advice of my school teacher: 'We must accommodate changing times but cling to principles that do not change.'"