The drug cost to cure Hepatitis C can cost $90,000 per treatment. This why many states will deny treatment 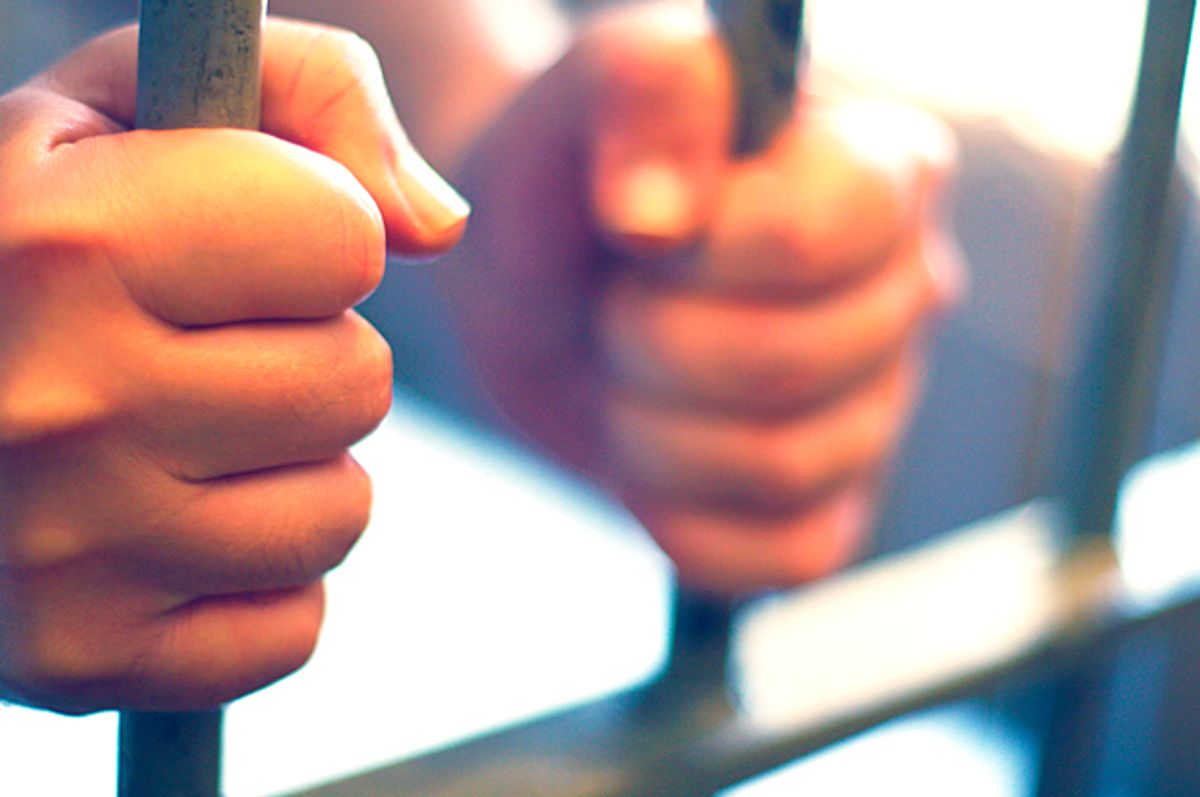 State prisons across the U.S. are failing to treat at least 144,000 inmates who have hepatitis C, a curable but potentially fatal liver disease, according to a recent survey and subsequent interviews of state corrections departments.

Many of the 49 states that responded to questions about inmates with hepatitis C cited high drug prices as the reason for denying treatment. The drugs can cost up to $90,000 for a course of treatment.

Nationwide, roughly 97 percent of inmates with hepatitis C are not getting the cure, according to the survey conducted for a master’s project at the Toni Stabile Center for Investigative Journalism at Columbia University’s Graduate School of Journalism.

Advocates say this ignores a 1976 Supreme Court ruling that determined an inmate’s medical care is a constitutional right.

“It doesn’t make sense to wait now that we have the effective cure available,” said Dr. Raymond Chung, director of Hepatology and the Liver Center at Massachusetts General Hospital. Chung was a former co-chair of the American Association for the Study of Liver Diseases and the Infectious Diseases of America’s HCV guidance panel, which recommends everyone with chronic hepatitis C have access to the cure.

Corrections departments in all 50 states and the District of Columbia were asked how many inmates have hepatitis C, how many are treated, what drugs are used for treatment, and what policies exist concerning inmates with the virus. Almost all of the states responded with some or all of the information requested. South Carolina and D.C. denied the requests.

With more than 1.3 million inmates, state prisons house the largest group of incarcerated people in the country — people with a higher risk of passing the bloodborne virus by sharing needles, razors or toothbrushes. The infection rate is much higher among the incarcerated than the general population, partly because nearly one-sixth of state prisoners are serving for drug offenses.

The vast undertreatment comes at a time when the infection rate for hepatitis C, or HCV, has been increasing in part due to the opioid epidemic.

Some prisons ignore their own guidelines for standards of care. In Florida, at least 181 inmates who met the criteria for treatment did not get the cure, according to records kept by the Florida Department of Corrections. The department has a 13-page policy that says prisoners are eligible for HCV therapy when the disease reaches Stage 2, which is when the liver shows mild to moderate fibrosis, or tissue scarring.

“The Department is committed to ensuring all inmates in our custody are provided medically necessary treatment that is in line with national standards and our constitutional responsibilities,” Ashley Cook, press secretary of the Florida prison system, said in an email.

Since late 2013, new hepatitis C drugs with a success rate of more than 95 percent have become available. But they come with sticker prices of $40,000 to $90,000 for the daily tablet regimen of eight to 12 weeks. These drugs replaced previous therapies that cost around $70,000 for 48 weeks of treatment with a much lower cure rate.

The Minnesota Department of Corrections treated 58 inmates from 2014 to 2016. Dr. David Paulson, medical director of the Minnesota state prison system, said his department cannot afford to do more.

“We have to operate within our means and treat the [prisoners] that are the most advanced first,” he said in an interview. “When prices go down, we will treat more people.”

In California, state officials have allocated $106 million in next year’s budget to treat inmates with hepatitis C.

Gilead, one of the companies that make the drugs, which include its popular brands Sovaldi and Harvoni, says patient access is among its top priorities.

In 2016, Gilead said in a statement to the BMJ medical research journal that it would “stand behind the pricing” of its antiviral drugs because it would pay off in the long run, compared to “the long-term costs associated with managing chronic HCV.”

Another drugmaker, AbbVie, said the company’s latest HCV drug, Mavyret, is significantly cheaper than all the drugs that came before it could expand access.

The HCV drugs in 2016 cost more than $50,000 per treatment course per inmate with some discount, according to Brandon Sis, senior pharmacist for corrections at the Minnesota Multistate Contracting Alliance for Pharmacy, which negotiates drug discounts for various agencies nationwide, including 15 departments of corrections. Sis said that the discounted price of the HCV drugs available to state prisons has since been cut by about half, to about $25,000 per treatment course at the end of 2017.

“This is a treatable condition. No one should die from HCV,” said Michael Ninburg, president of the World Hepatitis Alliance and executive director of Hepatitis Education Project, an advocacy group for people affected by the disease.

Barry Michaelson, a former Minnesota inmate, and Terry Riggleman, a current prisoner in Virginia, were among the untreated despite making several requests for the cure.

Over the course of their sentences, both felt their health deteriorating and were increasingly exhausted. Michaelson said he had frequent headaches and had white lesions and hard bumps on his skin. Riggleman said he felt constant pain in his abdomen and joints. Those symptoms are common as the disease progresses.

“We’re sick, and they’re doing nothing about it,” Michaelson said.

In Minnesota, where Michaelson was incarcerated, only 22 inmates had received the treatment during the first 10 months of 2017, the survey found.

“If we treat everybody with hepatitis C, it would exceed the entire total pharmaceutical budget for everything else and there would not be enough budget left to treat patients with other diseases,” Paulson said. “We need to do what brings the greatest benefit for the greatest number of people.”

According to Paulson, 15 percent of inmates, or around 1,500, in Minnesota state prisons were HCV-infected in 2017. If the department were to treat every inmate, it would have cost more than $75 million, far exceeding its $27 million budget for all health care.

“We need to look at the entire picture. The goal, my goal at least, is to offer treatment based on the risk of the adverse effects of hepatitis C,” said Paulson, who wrote a book on hepatitis C in 2000. “Ideally, we would treat everybody if it’s $50 a pop.”

The constitutional argument over treatment revolves around the Eighth Amendment prohibition of “cruel and unusual punishments.” Inmates have nowhere else to turn for health care. States restrict or prohibit any private or outside medical care.

“I’m in a position where I can’t help myself,” Riggleman said in an interview at the Augusta Correctional Center in Virginia.

“The cost isn’t an argument,” said Michaelson. “Once you’ve incarcerated people, you have to take care of them.”

Michaelson and Riggleman separately filed class-action civil rights suits against their states’ prison systems for not treating inmates with hepatitis C. Michaelson’s suit, assisted by outside counsel, was the country’s first suit of its kind and Riggleman’s was one of the most recent.

“The law is clear that we have the right to medical care,” Michaelson said. “So they have to treat us. No excuses.”

The litigation over this issue is ongoing in Minnesota and Virginia and in at least seven other states, including Alabama, California, Colorado, Florida, Missouri, South Carolina and Tennessee.

Approximately 640,000 inmates are released nationwide each year, and that means there could potentially be more than 75,000 HCV-infected people entering the general population annually. Those who didn’t get tested, or treated, while incarcerated would increase the risk of new infections.

“It’s very unfortunate that any person that could potentially be cured is not being treated,” Chung said in an interview. “It’s even more regrettable that we can’t treat persons who are at high risk of transmitting the virus to others.”

“From a public health standpoint, this is a disaster,” Paulson said. “If the court rules that the department has to treat everyone, that money has to come from the state legislature. That would be the money that would have been spent on roads, bridges, schools and child protection services.”

Michaelson was released from his Minnesota prison in March 2017, without getting any treatment for hepatitis C, almost seven years since his diagnosis. While locked up, he’d lost 20 pounds, so his old clothes hung loose from his body. He left the prison with two cardboard boxes full of papers from his legal research. Since he was no longer incarcerated, his name was removed from the lawsuit. A trial is expected to start in September.

Riggleman, who was diagnosed 14 years ago and will not be released for another 10 years, still awaits treatment.

“I don’t have a life sentence. I got people that I care about and I want to fix things. I want to live. I wasn’t sentenced to death. Don’t let me die in here.”

Thanthong-Knight reported this story as part of his master’s project for the Toni Stabile Center for Investigative Journalism at Columbia University Graduate School of Journalism.

The figures in this story came from a survey sent to the departments of corrections in 50 states and the District of Columbia, between October 2017 and March 2018. Some states responded to the survey without FOIA or Open Records requests, and others required a formal request.

All of the states and D.C. responded to the survey in some form. As of publication, 45 states had given complete answers for both the numbers of inmates diagnosed and treated. Arkansas, Hawaii and Missouri responded only to either the prevalence rate or the number of inmates treated. South Carolina and D.C. denied the FOIA requests.

The overall numbers are estimates, and some states provided only estimates. Additionally, not every state prison performed testing during intake or does routine testing. For example, Georgia tested only 4 percent of its inmates but reported that 727 inmates have HCV, meaning that almost 1 in 3 of the people who were tested had the virus.

The policies on testing and treating varies greatly by state; some are more restrictive than others in terms of treatment eligibility, giving access to those in advanced stages of disease. Alaska, Georgia, Maine and South Dakota did not have clear written rules for testing or treating HCV. Mississippi had a policy that dated to 2005, almost a decade before the current drugs were introduced.

The current HCV medications come in at least eight brands. Not every prison system had these treatments in their formularies; physicians prescribing non-formulary HCV drugs need approval from the department of corrections. At least nine states did not include any of the HCV drugs in their prescription lists.