Since 2015, Poland has been governed by a far-right nationalist group that has completely reshaped the country 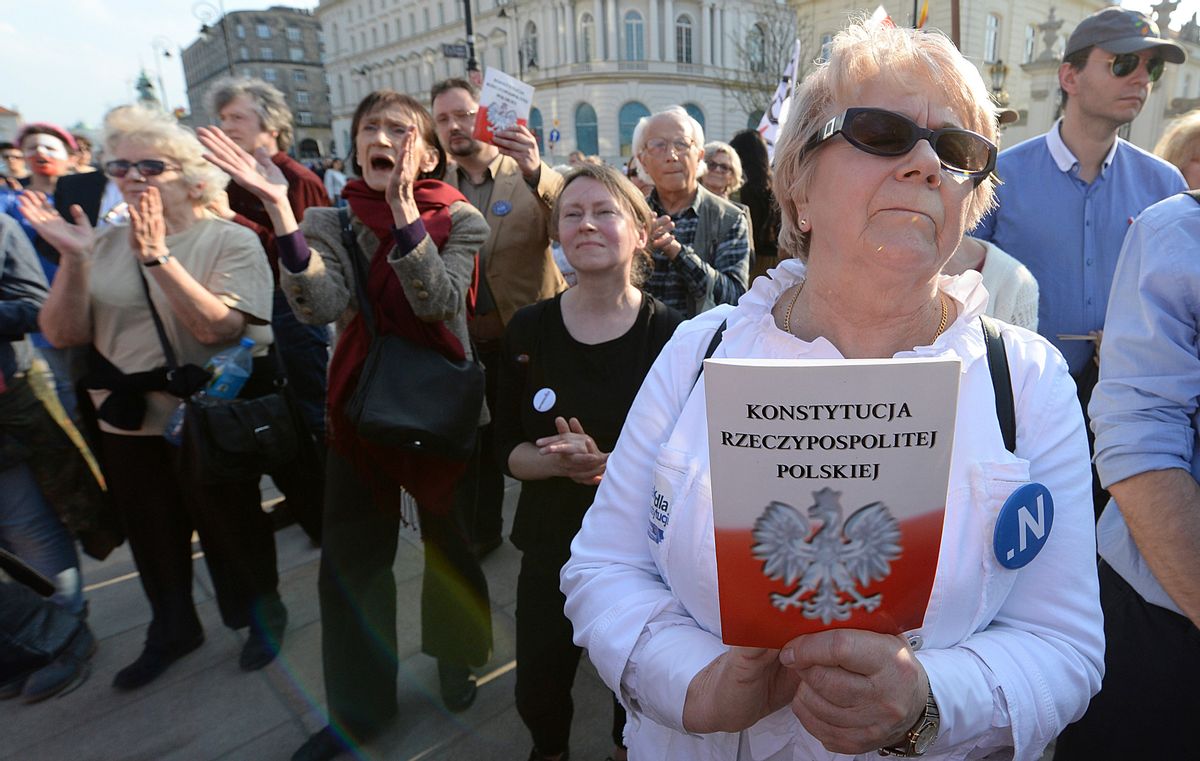 People demonstrate on the 20th anniversary of Poland's constitution in front of the presidential palace in Warsaw, Poland, on Sunday, April 2, 2017. The protest comes at a time that they and other poles fear the constitutional order in Poland is threatened by the country's populist government.(AP Photo/Czarek Sokolowski) (AP)
--

Since the elections of 2015, Poland has been ruled by the Law and Justice Party (Prawo i Sprawiedliwość, or PiS), a far-right nationalist group that has transformed the country beyond recognition.

Poland had once been lauded as the great post-communist success story, with solid democratic institutions and a booming economy. Now, under PiS rule, Poland is steadily becoming an authoritarian, xenophobic pariah among democratic nations.

This week, the regime passed another milestone on the path toward establishment of a one-party state.

If all goes as PiS leaders have planned, about 40 percent of the country’s judges will be forced out of office. They will be replaced by people loyal to the government and subject to dismissal at any time. PiS couched its takeover in the form of an order lowering judges’ retirement age. Every judge over age 65 will now be dismissed except for those who are approved for continued service by the current regime.

This amounts to a political takeover of the independent Polish judiciary.

On July 4, Polish Prime Minister Mateusz Morawiecki appeared before the European Union parliament to defend the impending judicial purge. He argued that it was necessary because of the continued presence of judges whose careers date from the communist era.

This justification shouldn’t be taken seriously: Only a few hundred judges out of around 10,000 began their careers on the bench prior to the fall of communism in 1989. Those judges were long ago screened to weed out those who had issued politically motivated rulings.

And while it is true that there have been episodes of corruption in the Polish judiciary, there is no evidence to suggest that such incidents are more common here than anywhere else. In any case, the purge does not entail any attempt to investigate and sanction those guilty of corruption: It is a thorough removal of an entire cohort of judges.

EU officials have challenged PiS from the start, but their power to issue concrete sanctions is limited. Any meaningful steps can be vetoed by a single dissenting vote. Hungary’s equally authoritarian ruler, Viktor Orbán, has promised to defend his Polish allies.

Who are the enemies?

When dealing with domestic audiences, those flimsy arguments about removing hidden communists are less central to PiS rhetoric. Two other issues are emphasized instead.

First is the claim that even though few communist-era judges remain, a larger percentage of them have parents who served during the Polish People’s Republic. In other words, PiS supporters argue that the supposed disrepute of one generation should be passed on to the next.

This argument is central to understanding the worldview of PiS. While many Poles opposed communism because it was authoritarian, others were more disturbed by the perception that it was not national, not truly Polish.

This belief is grounded in a long tradition of nationalist thought that I have written about elsewhere. That tradition, which dates back at least a century, equated Polishness with a narrow concept of a religiously and ethnically homogeneous nation locked in an unending struggle for survival with every other nation.

Among those real and (mostly) imagined national enemies were Germans, Russians and above all Jews. The latter two were commonly lumped together within paranoid conspiracy theories about a “Judeo-Bolshevik” menace.

The overt expression of this anti-Semitic worldview has faded somewhat from public life, though sadly, it hasn’t disappeared.

More common today is a less explicit conviction among supporters of PiS that an unspecified “they” still control the country behind the scenes, passing their authority down from generation to generation. In PiS rhetoric, these enemy elements are often referred to as “Polish speakers” rather than genuine Poles.

Within this ideological framework, some individuals with known links to the old communist state apparatus are welcomed into the new regime, as long as they demonstrate their Roman Catholic bona fides and their devotion to the PiS worldview. The issue is not whether one is specifically implicated in the political oppression of the communist era, but whether one belongs to “them.”

The second dispute at the core of the judicial purge involves the very nature of the Polish state.

First, some history. Communist rule came to an end in 1989 thanks to the so-called “Round Table accords,” a negotiated settlement with the leaders of the democratic opposition and the Solidarity union movement, led by Lech Wałęsa. It would take until 1997 for a new constitution to be prepared, but the basic outlines of a liberal parliamentary system were established in that agreement.

One of the principles enshrined in those 1989 accords was that “the separation of power into legislative, executive, and judicial branches shall constitute the basic principle of democratization at all levels of government.”

Although this might seem legalistic and abstract, it was essential. The authors of this text were affirming that democracy required more than just an elected government. It was necessary to ensure that power was distributed broadly, so that no one could use a democratic mandate as an excuse to violate basic civil or human rights.

The phrase “checks and balances” might be a cliché, but Poles, as they threw off a dictatorial regime, knew all too well how important this principle was.

PiS rejects the Round Table accords and the entire system built upon them. They claim that the post-1989 system was too weak to root out all the remnants of communism. They say that the separation of powers allowed hostile forces to establish centers of authority that limited the democratic will of the people.

Again and again, PiS politicians repeat their conviction that national sovereignty must be unified, and not fragmented among separate judicial, legislative and executive authorities. Such a distribution of power, they argue, allows each branch of government to act like a separate “caste,” blocking the national majority.

As one government supporter once put it, “the will of the nation stands above the law.”

The founder and leader of the movement, Jarosław Kaczyński, dismisses the idea that legal constraints should limit what “the sovereign” can and cannot do.

The government’s spokespeople are adamant that they believe in democracy. But their understanding of this term appeals to a tradition of authoritarian democracy, where the government represents the singular will of the people, unchallenged by legalistic divisions of power.

This helps explain the repeated claims by PiS supporters that the “Polish people” should be able to determine their own affairs without interference – whether from EU institutions or unelected Polish judges.

The ruling party is supported by fewer than 40 percent of the population and an overwhelming 76 percent want the judiciary to remain independent from government oversight. Evidently, that fact is irrelevant.

In the PiS worldview, the sovereign must speak with one voice, and that voice belongs to them.