"Helsinki has frozen over!" 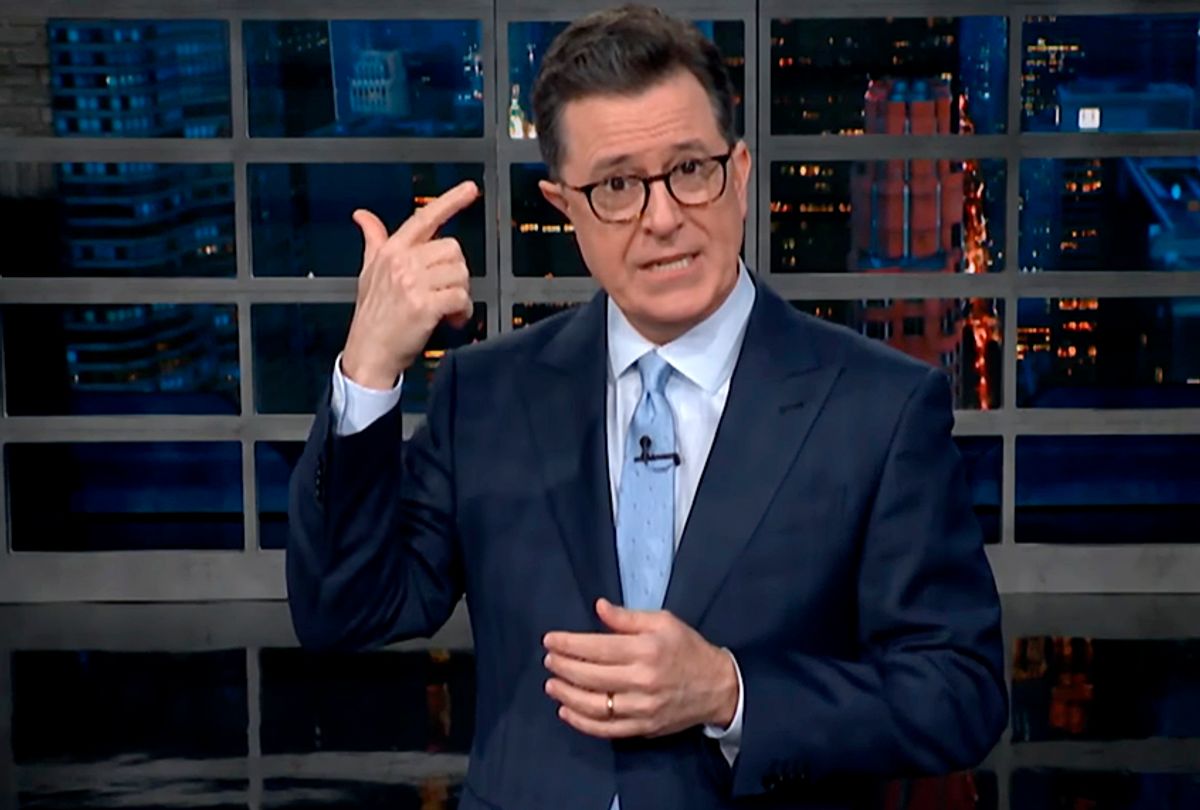 On Monday President Donald Trump met with his Russian counterpart, Vladimir Putin, during a summit in Helsinki that members of both parties agreed was embarrassingly obsequious — and, quite possibly, even treasonous.

How does a comedian make light of such a humiliating moment in American history? By getting deadly serious.

Stephen Colbert admitted, albeit jocularly, that the Helsinki summit had shaken him "to his core," and although he cracked jokes about it, he also encouraged his audience to stand up against the president's behavior. Near the beginning of his monologue, he even asked if they'd be okay with simply "taking it until he's gone" in the name of national unity. When they shouted back "No!" in unison, he replied, "Me neither" and went on his monologue.

After Colbert showed a clip of the joint press conference in which Putin asked if reporters believe the Russian government would try to obtain compromising information on 500 American businessmen attending a meeting in St. Petersburg, including then private citizen Donald Trump.

"Do you think we tried to collect compromising information on each and every single one of them?" Putin asked the press.

Colbert replied, "Yeah. Yeah, I do. When I was in Russia – and this is true – I was followed everywhere I went and I’m a comedian. All right? I was informed by our security people in no uncertain terms that my phone was bugged and my room had cameras in it. So I showered in a blue blazer. When I finally, when finally I had to get naked eventually – and this is true – I turned to every mirror and said, ‘You like, Ivan? You like?’"

Jimmy Kimmel was a little more effective than Colbert at summoning genuine mirth from the situation.

"Helsinki has frozen over," Kimmel exclaimed to kick off his night's monologue.

When Trump said he was going into his meeting with Putin with "low expectations?" Kimmel: "Yeah, we all were." When it was noted that Trump and Putin met alone except for two interpreters? Of course, Trump wouldn't want his advisers "to see him naked, which is natural." When Trump winked at Putin during their photo op before the press? "That’s the ‘thanks for keeping that tape between us guys’ wink," Kimmel quipped.

Kimmel's high point came when he showed a clip of Trump refusing to heed a reporter's call that he denounce Putin's meddling in the 2016 presidential election and warn the Russian government never to engage in such activity again.

"If you're wondering whether or not Vladimir Putin has an incriminating video of Donald Trump, we now know beyond a treasonable doubt that he does," Kimmel said after that footage was done playing.

Seth Meyers opened his "A Closer Look" segment by contrasting Trump's summit with Putin with the fiasco that ensued when the president met with the Queen of England.

"He was in the UK, where he met Queen Elizabeth, and he immediately embarrassed himself by breaking royal protocol and wandering aimlessly in front of her," Meyers recalled before playing a clip of the incident. "The queen just disappeared behind Trump! It's like a royal eclipse. The only thing missing was Trump staring directly at it."

He also pointed out that, given Trump's ability to effectively blot out the queen with his body, that it was highly unlikely that he only weighs 239 pounds. Trump "David Copperfield-ed a monarch," Meyer joked. Later he pointed to how Trump referred to the European Union as a "foe" based on its trade policies with the United States, although Trump tried to backpedal by claiming "that doesn't mean their bad."

Meyers had to disagree.

"No, that's exactly what that means. If you call someone a 'foe,' that means you think they're bad. You never heard Batman say, 'The Joker is my foe, but other than that he's a really great dude,'" Meyers pointed out.

Yet Meyers felt that all of these signs, troubling though they were, paled in comparison to Trump's verbal self-prostration at Putin's feet during the Helsinki summit. After showing a number of clips of Trump sucking up to Putin, Meyers joked, "Can someone get Trump a glass of water cause he thirsty?"

Meyers then quipped he was worried that Trump was so enamored of Putin that he had allowed him to annex one of the fifty states ("Here's an electoral map. Pick one of the blue ones.") before adding, "Seriously, Trump gushes over Putin like a flustered 12-year-old who just meets Mickey at Disneyland." He then showed footage of Putin giving Trump a soccer ball as a gift as proof that the president is being treated like a 12-year-old by his Russian handler.

Trevor Noah kicked off his segment of "The Daily Show" by pointing out how foreign policy observers agree that Trump's performance at Helsinki was the most embarrassing one ever put on by a president interacting with a foreign leader, even though President George H. W. Bush had once vomited on the Prime Minister of Japan. Like many of his fellow talk show hosts, Noah was horrified that Trump had not stood up to Putin on the election meddling and actively sided with Putin over America's own intelligence agencies.

He also had a scathing summary of what he felt was Trump's basic position on the matter.

"Now in Trump's defense, he has a good point. Sure, on the one hand, Russia messed with the US by meddling in the elections, but on the other hand, America held elections, so they were asking for it. Yeah. Makes sense," Noah joked.

Listen: Having to produce quality comedy in an era when the American president is blatantly betraying his country before the world is no easy task. For all we know, Trump will soon take after Putin and try to punish media personalities who say bad things about him (he's already darkly joked about doing precisely that). For the time being, though, Americans need to take comfort in the small things, even as the big ones are making the world into a very, very scary place.