Mandalay Bay owner sues victims of Las Vegas mass shooting, claims it has "no liability of any kind"

"It's just really sad that they would stoop to this level," a lawyer for victims said of MGM Resorts International 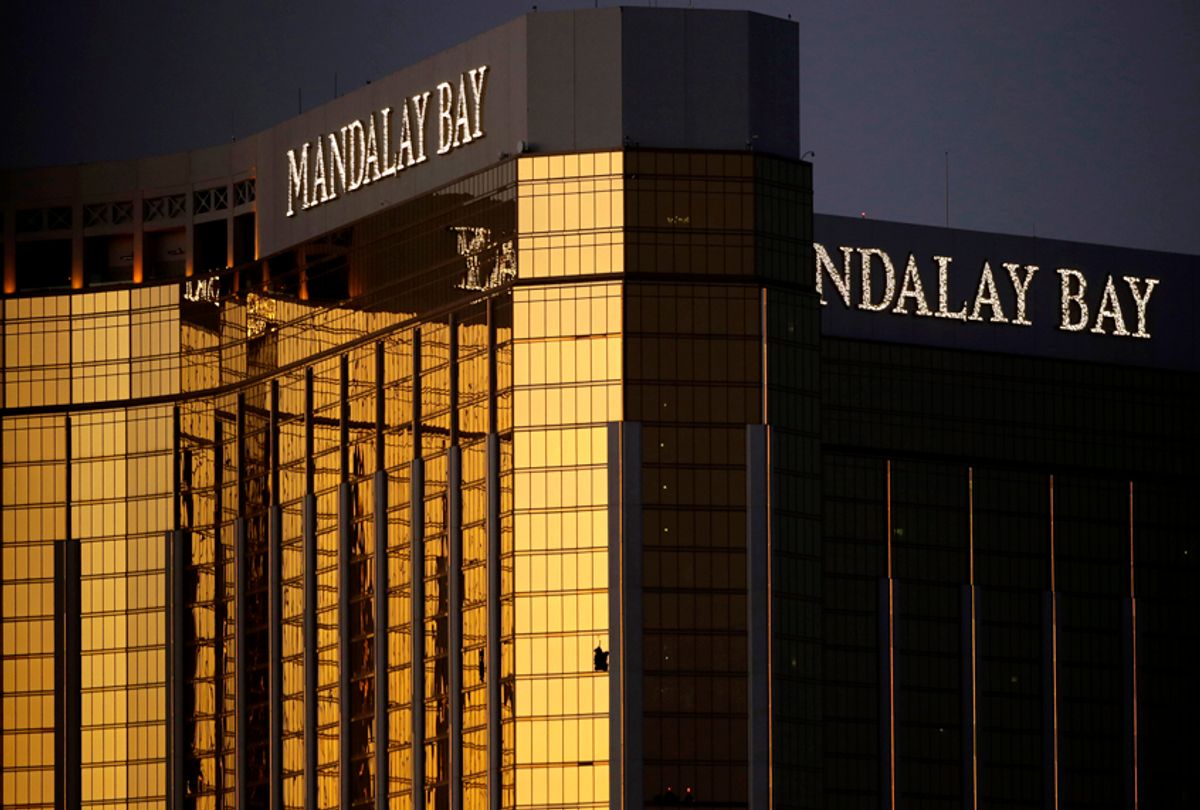 Windows are broken at the Mandalay Bay resort and casino in Las Vegas, the room from where Stephen Craig Paddock fired on a nearby music festival, killed 58 and injuring hundreds on Oct. 1, 2017. (AP/John Locher)
--

The corporate owners of Mandalay Bay and the Route 91 Harvest festival venue have filed federal lawsuits against the victims of last year's mass shooting at a country music concert in Las Vegas, claiming that MGM Resorts International has zero liability in the deadly Oct. 1 incident.

According to a new report published Monday, the company filed the complaints against the more than 1,000 shooting victims in federal courts in both Nevada and California, arguing that pending lawsuits against MGM should "be dismissed."

"Plaintiffs have no liability of any kind to defendants," the complaints argue, per the Las Vegas Review-Journal.

One Las Vegas attorney representing victims slammed the resort owner's filings as a "blatant display of judge shopping" that "quite frankly verges on unethical."

"I've never seen a more outrageous thing, where they sue the victims in an effort to find a judge they like," Robert Eglet told the Review-Journal. "It's just really sad that they would stoop to this level."

On Monday, a spokeswoman released a statement that framed MGM Resort International's move as a win for the community at large.

"The Federal Court is an appropriate venue for these cases and provides those affected with the opportunity for a timely resolution," Debra DeShong said. "Years of drawn out litigation and hearings are not in the best interest of victims, the community and those still healing."

In early October of last year, Mandalay Bay guest Stephen Paddock shot out the windows of his 32nd-floor room and opened fire on concertgoers attending the Route 91 Harvest music festival.

In what is now considered to be the deadliest mass shooting in U.S. history, Paddock killed 59 people and injured more than 800.

By the time police reached him, Paddock had already killed himself. His motive remains unclear.

Lawsuits alleging that the festival did not have adequate exits and security or properly-trained staff have been filed against both MGM and concert promoter Live Nation, which some victims claim resulted in additional injuries and exposure to the gunman's fire.

The legal argument behind MGM's lawsuits relies on an interpretation of a federal law passed in the wake of 9/11, according to USA Today:

MGM claims the case must be dealt with in federal court under terms of the post-9/11 Safety Act, which provides incentives for development and deployment of anti-terrorism technologies. The company says the security firm it contracted for the concert, CSC, was approved by the Department of Homeland Security and thus released from liability under the act.

That release extends to the Mandalay Bay hotel, MGM says.

It is unclear, however, if MGM's rationale would pass muster in court. As the Review-Journal points out, the Federal Bureau of Investigation never labeled Paddock's crime as "an act of terrorism":

The act cited in the new lawsuits was passed just more than a year after the Sept. 11, 2001, attacks and intentionally included broad protections. For instance, the act defines terrorism as any unlawful act inside the United States that causes “mass destruction, injury or other loss.”

The FBI has not called the Las Vegas mass shooting an act of terrorism because the gunman had no clear motive, and the FBI defines terrorism as an act of terror associated with extremist ideologies of a political, religious, social, racial or environmental nature.

"Even if MGM is successful, that may not outweigh the adverse publicity for the company that the suit generates," Carl Tobias, a professor at the University of Richmond's law school, told the outlet.