As Americans get gouged on healthcare, Big Pharma cannibalizes profit to feed shareholders

In the past 5 years, the top 5 U.S. drug companies paid $1.28 in buybacks and dividends for every $1 in profit 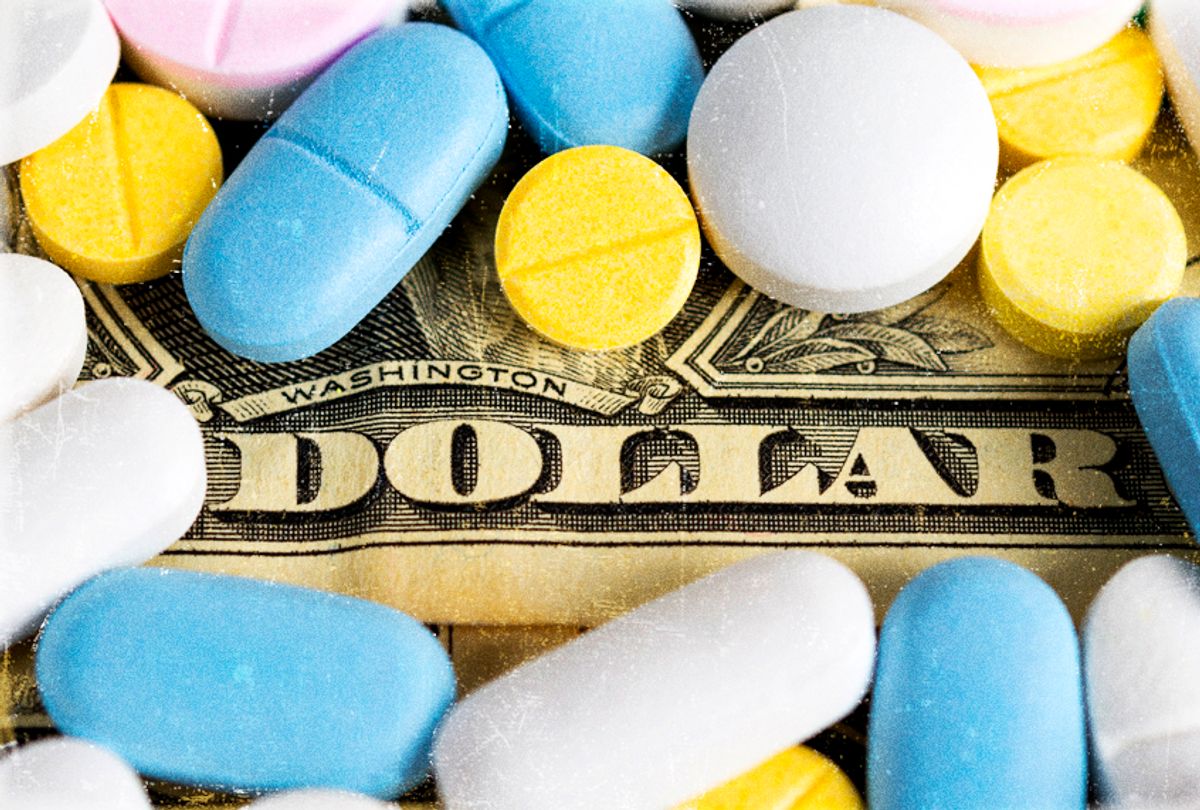 To give you an idea of how much Americans are getting gouged on their purchases of medicine, consider this: Over the past three years, the cost of six commonly used drugs categories, including treatments for asthma, diabetes, cancer, and HIV, have risen by an eye-popping average of 30 percent, or more than five times the rate of inflation. With an average cost of nearly $1,200 per year per person, prescription drugs cost more in the U.S. than anywhere else in the world.

While modern medicine involves a lot of pill-taking, the main reason why Americans pay so much for prescription drugs is because — unlike every other capitalist democracy on the planet — the U.S. government will not intervene to reel prices back from the stratosphere. At the same time, the country’s largest drug manufacturers are often spending more money enriching their shareholders than they earn in profits.

And currently there seems to be no relief in on the horizon for Americans struggling with their healthcare budgets.

According to a recent report from Wells Fargo Securities, the price of 104 drugs increased from early June to early July, including the prices of many branded drugs manufactured by Teva Pharmaceuticals and the insulin drug Tresiba, manufactured by Novo Nordisk.

After President Donald Trump publicly shamed Pfizer, the New York City-based company postponed price hikes on nearly 100 of its drugs after Pfizer CEO Ian Read had an “extensive” conversation with the president. But the decision comes after Pfizer already raised prices on 91 of its drugs by about 20 percent last year.

“The argument that the pharma lobby has made for the last three decades or so has been that they need unregulated drug prices in order to accelerate their investment in innovation,” William H. Lazonick, president of the Academic-Industry Research Network, a non-profit research group, told Salon. “But in fact they don’t need high drug prices; they’re doing it just to get their stock prices up.”

READ MORE: Your job can make you a bad parent

Drug manufacturers transfer wealth to their shareholders (including company executives who are paid in stock options) using two methods: one is by purchasing their own stock, lowering the number shares in the market to boost the value of available stock owned by shareholders; the other is by paying cash dividends, typically on a quarterly basis.

Salon examined the regulatory filings of the top five pharmaceutical manufacturers listed on the S&P 500 index and found that all of them spent more on stock buybacks and dividends than they earned in profit from 2013 to 2017.

Salon reached out to the five drug manufacturers asking them to explain the rationale for spending more on buybacks and dividends than what they earned in profit; none of them replied 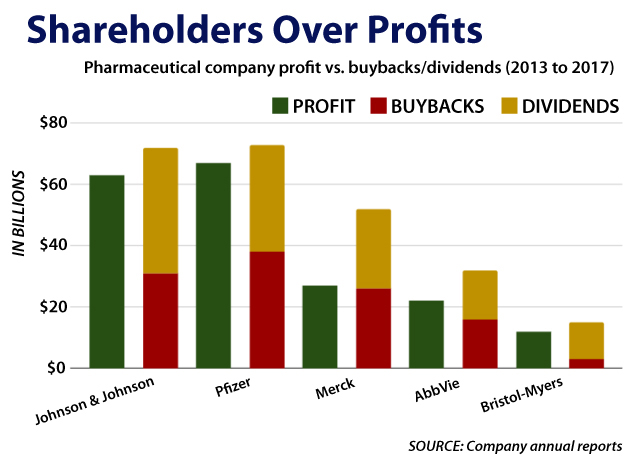 Lazonick and Öner Tulum, senior researcher at the Academic-Industry Research Network, recently took a more comprehensive look at how much U.S. drug companies spend on buybacks and dividends for an upcoming article in the International Journal of Political Economy. They found that from 2007 to 2016 the 19 pharmaceutical companies listed on the S&P 500 spent nearly every penny in profit (99.6 percent) generating wealth for shareholders. Furthermore, shareholders received more money from these companies than what these companies spent developing new drugs.

Part of what has fuelled this buyback/dividends frenzy in recent years has been the historically low borrowing costs since the Great Recession of 2007-09. Interest rates have been so low that companies have engorged on cheap debt, enabling them to borrow money to subsidize their spending on dividends and buybacks. Meanwhile, the recent GOP-sponsored cut of the top corporate tax rate from 35 percent to 21 percent has freed up more corporate cash to feed investors that have already feasted on one of the longest bull markets on record.

With so much money sloshing around for shareholders to rake in, it’s not surprising that share buybacks and high dividend payments have their defenders.

Responding to criticism that the tax cuts have benefited shareholders while  working class wages remain flat, JPMorgan Chase CEO Jamie Dimon recently called stock buybacks and dividends “a natural function of capital markets and the proper deployment of capital” and called critics of this system of returning cash to investors of “basically ignorant of how capital markets function.”

“As the subject of [stock] repurchases has come to a boil, some people have come close to calling them un-American – characterizing them as corporate misdeeds that divert funds needed for productive endeavors,” Buffet wrote in his letter.

But, historically speaking, neither share buybacks nor dividends have played big roles in the rise of U.S. corporate capitalism. Before the 1980s, the idea of running companies primarily for the interest shareholders was largely unheard of.

That shift toward aggressively “maximizing shareholder value” began in November 1982 when the U.S. Securities and Exchange Commission instituted so-called Rule 10b-18. Before then, companies were hesitant to implement aggressive stock buyback regimes out of concern they could be charged by the SEC with manipulating the price of their shares.

But after Rule 10b-18 was implemented, companies were granted safe haven to boost buyback activity. Ever since, the amount of money companies have spent on buybacks has grown steadily, hitting record highs in recent years. This year, thanks to the GOP tax reform, corporate America is on track to hit another record high.

Some congressional Democrats are pushing back on buybacks, but it’s highly unlikely there’s enough support to succeed even if the Democrats regain control of Congress. Earlier this year, Democratic Sen. Tammy Baldwin of Wisconsin introduced a bill that would repeal Rule 10b-18, opening the way for a future SEC to potentially treat buyback as stock-price manipulation. But only three Democrats have signed on as cosponsors: Sens. Elizabeth Warren of Massachusetts, Brian Schatz of Hawaii and Kirsten Gillibrand of New York.

Therein lay one of the biggest problems. Dividends and buybacks (especially buybacks) have become standard operating procedure for corporate America, to such a degree that even liberal Democrats are ok with them. Millions of shareholders (aka voters) have grown accustomed to fattening their retirement portfolios and other managed wealth funds with these payouts  across every sector of publicly traded companies, be they in tech, oil and gas, fast food, or pharmaceuticals.

“The whole process is systemic and endemic in the U.S. economy, but it’s having a lot of different impacts and different ways it’s being felt in different industries,” Lazonick told Salon.

In the healthcare industry, the cost of excessive buybacks and dividends contributes to the growth in drug prices. And higher drug prices can lead to serious life-and-death situations for Americans struggling to make their healthcare ends meet. Perhaps it’s time for shareholders to lift their boots from the necks of people struggling to pay for ways to live longer.