Guilty: Donald Trump betrayed his country in Helsinki. It wasn’t the first time

Trump asked for Russia’s help to get elected, and Putin confirmed it while standing right next to him 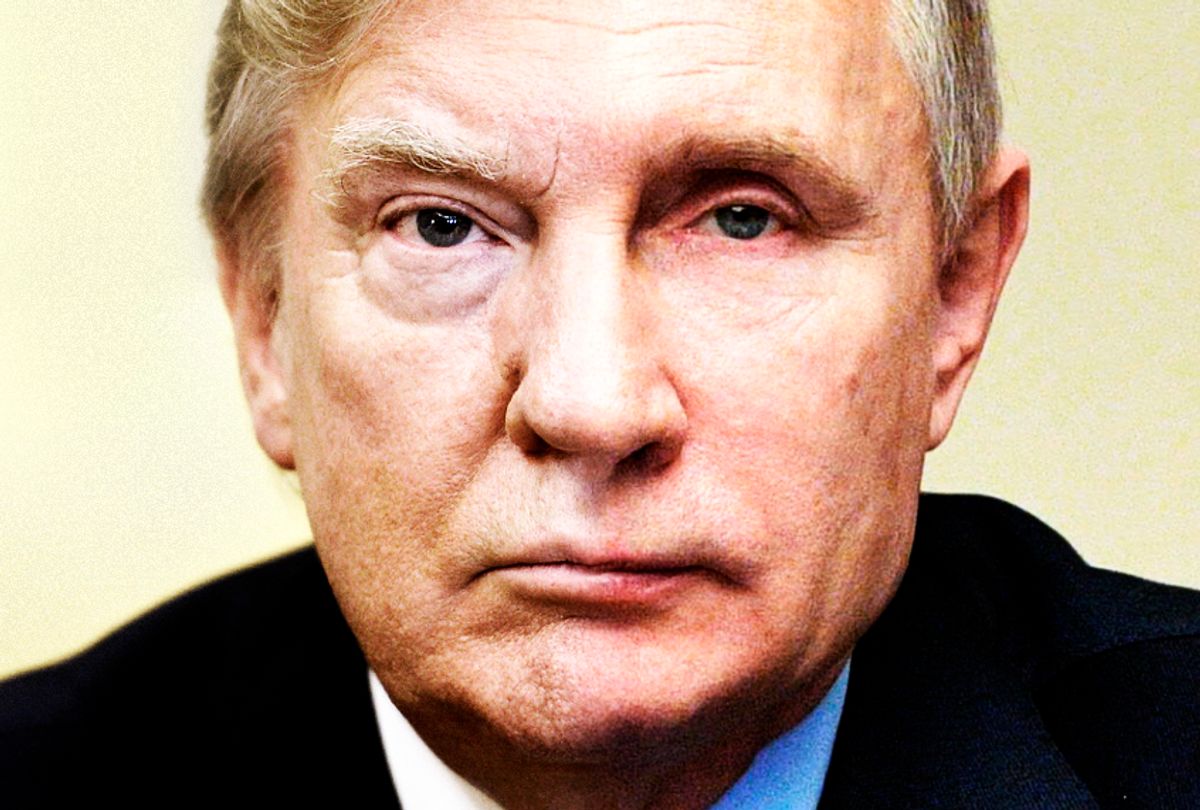 The only question remaining to be answered after Trump’s dishonorable performance in Helsinki is how many Americans will be indicted for conspiring with agents of Russian intelligence to steal the election of 2016.

Everything else is known, primarily the fact of it: Agents of a foreign, hostile power hacked into the computers of an American political party, the Democratic Party, and the electoral systems of at least 21 states, successfully breaching the voter registration roles of seven of them, according to NBC News. Vladimir Putin himself confirmed that Trump was his pick for president.  He had a smile on his face when he said it.

Even after the indictment of 12 Russian intelligence agents for attempting to influence the campaign of 2016, even after Trump’s surrender of his Department of Justice and his intelligence community to Putin in Helsinki, Putin and Trump himself have still denied that the Russians interfered with the 2016 presidential election.  They have been denying it for more than two years now.

They began by denying outright that the interference took place. Then they denied they knew anything about it. Then they denied that anyone in the Trump campaign had made any contact with Russians during the election. After he took office, Trump ordered his spokesman into the press room in the White House and deny that there had been any contacts with Russians at all. Then he took it upon himself to make the same denial at a press conference in the White House.

Then the revelations started. Former campaign adviser turned National Security Adviser Michael Flynn had been talking to Russian Ambassador Sergey Kislyak throughout the campaign. After President Obama imposed new sanctions on Russia following revelations of Russian election interference in the election, Flynn promised Kislyak that Trump would lift the sanctions as soon as he became president.

One after another, the revelations came. Donald Trump Jr., campaign chairman Paul Manafort, and Trump son-in-law Jared Kushner met with several Russians in Trump Tower who claimed to have dirt on Hillary Clinton. Campaign foreign policy adviser George Papadopoulos met in Rome and London with a spurious Maltese college “professor,” almost certainly acting as an agent of Russian intelligence, who told Papadopoulos the Russian government had “dirt” on Hillary Clinton in the form of “thousands of emails” they would be willing to disseminate to help elect Donald Trump president.

On and on the revelations flowed, about contacts between the Trump campaign and Russians. There were more meetings in Trump Tower between Kushner and Flynn and Kislyak, and more meetings with Russian bankers close to Putin. Erik Prince, the founder of Blackwater, a Trump campaign adviser and the brother of Secretary of Education Betsy DeVos, met in the Seychelles Islands with Kirill Dmitriev, the head of a “wealth fund” controlled by the Russian government, seeking to set up a “back channel” between Trump and Moscow. Trump son-in-law Kushner had another meeting in Trump Tower with Kislyak, looking to set up a “back channel” between Trump and Putin using communications facilities in one of the Russian embassies in the United States. Why Donald Trump needed a “back channel” to Vladimir Putin when he could pick up the phone and talk to him has never been explained. But I think we know now that they were seeking to formalize a “back channel” because the Russians that had been helping them get elected were intelligence agents, and intelligence agents don’t use “front” channels.

Listing the contacts between Trump people and Russians that we know about would take a whole column. In fact, I’ve written that column at least three times.

That’s what Trump and his people are counting on. It’s almost impossible to keep up with the individual scandals that have been revealed over the last year and a half, and it’s even more impossible to string them together into a coherent whole. Comparing, for example, all the times the Trump people denied contacts with the Russians to the contacts themselves would take a whole column — another one I’m pretty sure I’ve written before.

The stuff keeps coming and coming, but each little piece is discrete, each "scandal" is separate from the other. But when you sit back and take a good, clear look, it’s obvious that Trump conspired with the Russians to steal that election.

He had the mechanisms to do it ready at hand. He made sure there were people around him with excellent Russian intelligence connections like Manafort, and he had dupes in place like Papadopoulos who “ran into" Joseph Mifsud, the so-called Maltese professor in Rome, who became "interested" in him when Papadopoulos told him he was working for the Trump campaign.

You see what I mean? One contact with Russians leads to another, and every one of them raises new questions. What the hell was Mifsud doing in Rome? How did he “run into” Papadopoulos? How is it that they both ended up back in London? Why was this obscure college “professor” friendly with one Ivan Timofeev, who just happened to be the director of a Russian government controlled “think tank” called the Russian Government Affairs Council? Why did Mifsud introduce Papadopoulos to Timofeev? Why did the Russian shadow government functionary Timofeev all of a sudden offer to introduce this 29-year-old American who was working for the Trump campaign to officials in the Russian Foreign Ministry?

Wouldn't you love to see the expense account receipts Mifsud submitted to Moscow to cover his travel, hotels and restaurants, while he was swanning all over Europe pursuing people like Papadopoulos?

Trump has been in bed with Putin for at least a decade. The Financial Times of London last week published an exhaustively researched article on the deals behind the Trump International Hotel and Tower Toronto going back its beginnings in 2007. The article “connects the US president with a shadowy post-Soviet world where politics and personal enrichment merge.” The Financial Times presents “evidence that Trump’s billionaire partner in the Toronto project authorized a secret $100 million payment to a Moscow-based fixer representing Kremlin-backed investors. That payment was part of a series of transactions that generated millions for the backers of the Toronto venture — a project that, in turn, made millions for the future president.”

The details of the shady deals between Trump and his partner, Alex Schnaider, described by the FT as “a Russian-Canadian billionaire whose fortune had its origins in the collision of communism, capitalism and the KGB at the fall of the Soviet empire,” are too lengthy to recount here. Suffice to say, the Financial Times gives the lie to Trump’s repeated claims that he has “no deals” with Russians.

I think he didn't make the decision to run for president until he had Putin's pledge that the GRU and other Russian assets would help him. Why else was Russia the only foreign nation Trump ever mentioned on the campaign trail? It was constantly on his mind. I remember being at first confused and then amazed at the constant citations of Russia by Trump in 2016.  The brilliant shuffle in the three-card monte game that was the Trump campaign was when "Guccifer 2.0" "leaked" the emails to WikiLeaks. Trump could then harp on the emails using the one-word code "WikiLeaks" some 160 times in speeches without ever referring to anything that was identifiably, or even suspiciously, Russian. WikiLeaks was taken by the U.S. media as being a neutral and even friendly party in 2016 because of the roles it had played in releasing State Department documents and everything else until then. All Trump had to do was say, "I love WikiLeaks!" and his robotic minions knew exactly what he was saying. WikiLeaks was a one-word code for Hillary's emails, for "Hillary is corrupt." Talk about your dog whistles.

Can you recall a single detail from all the thousands of emails that was dispositive about Hillary? That she was actually “corrupt” in some way? I can't recall one even vaguely "corrupt" thing the emails proved she did. But Trump didn't need evidence. All he needed was the fact that the Democrats’ emails had been secret, and now they were "revealed."

That’s why it’s time to step back and say, forget all these details. With the indictments of 12 Russian intelligence officers announced at the Department of Justice last Friday, we know what happened. We know what the Russians did and how they did it.

And we know that Trump is guilty. We saw it for months during the campaign. We’ve seen it daily since he’s been president. And we saw it again on Monday in Helsinki. He’s guilty of lying over and over and over again about the connections between himself and his campaign and Russians. And now we know why it was so necessary for him to lie about his contacts with Russians: Agents of the GRU, the Russian military intelligence agency, were actively aiding his campaign for president on the orders of Vladimir Putin, because Russian intelligence agents don’t do a single thing unless it’s on orders from Putin himself. Putin practically came out and admitted it at the press conference in Helsinki.

It's incredible, isn't it, to think how far this country has fallen, that we have a president who was elected with the assistance of the intelligence service of a hostile foreign power, literally a Manchurian President?

But it’s clear by now that we didn't fall at all. We were already down there. The ignorant masses waiting for an authoritarian asshole like Trump to tell them how to vote and how to think were there all along.

I just didn't know there were that many of them, and that they would be moved to vote into office the likes of Donald Trump. They elected the man we saw on the stage with Putin in Helsinki, a man with no honor willing to betray his own country in order to be elected, and now willing to betray his country as its leader. We saw all the proof we needed at that press conference on Monday. They didn’t elect a president. They elected Putin’s puppet.

God help us as Robert Mueller moves on with his investigation.We’re going to need it.