Donald Trump is taking America back — to 1798, when John Adams colluded with an enemy power

"His Highness" John Adams attacked the press, tried to deport his enemies and colluded with a foreign power. Hmm 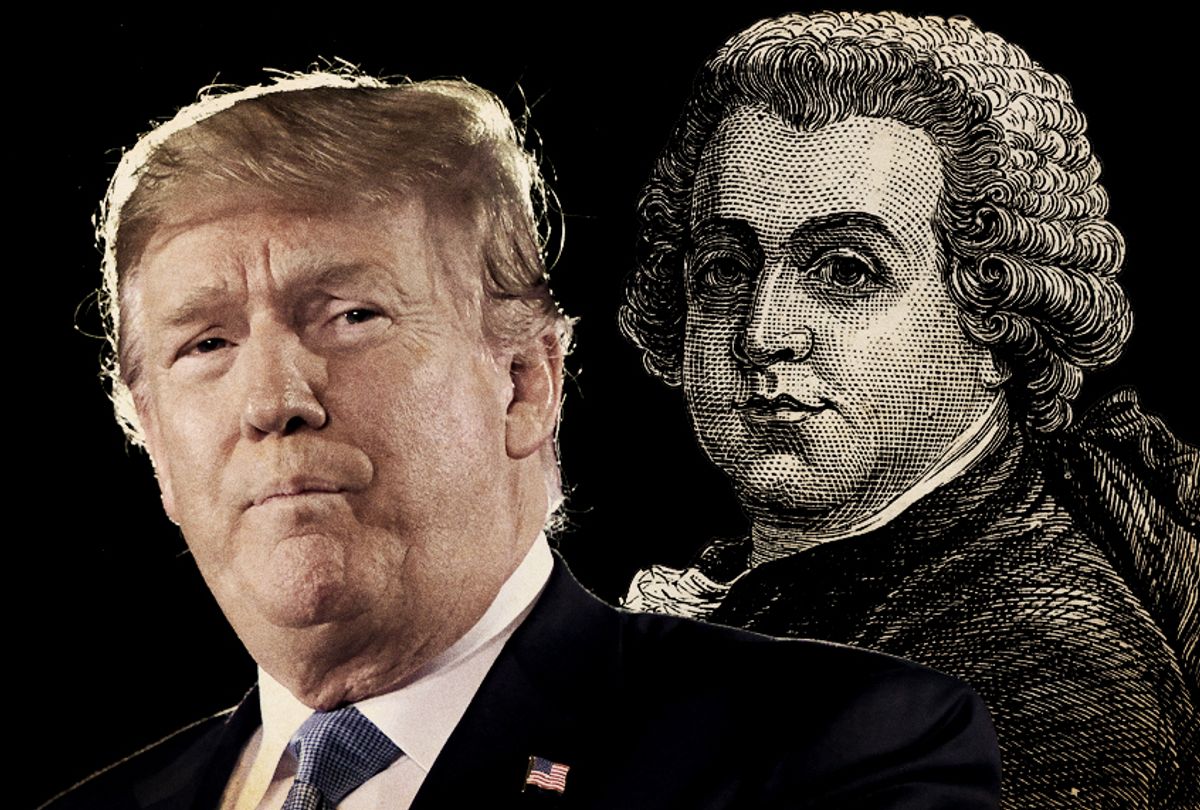 While President Donald Trump's dalliance with President Vladimir Putin of Russia on Monday in Helsinki may suggest a historic shift in U.S.-Russian relations, his actions actually recall another trying moment in history when an American president's collusion with a former enemy led to one of our nation's darkest times.

President Trump is not leading us into fascism, as many warn. He is taking us back to 1798.

Strangely enough, Trump resembles President John Adams, who succeeded George Washington as president in 1797. Adams once wrote about preferring the title of “His Highness, the President of the United States and Protector of the Rights of the Same.” As admirers of the British system of government, Adams and Alexander Hamilton both accepted a division in society between the “few and the many.” An aristocracy was unavoidable; the United States would be ruled by the rich, the wellborn and the able.

Adams was also a thin-skinned president, who chafed at the giggles over his moniker “His Rotundity,” and railed against what he considered deceptive and false characterizations of his administration by certain journalists. Like Trump’s personal attacks against “fake news” purveyors, Adams singled out contentious newspapers, including the Argus in New York, that he planned to take down; Abigail Adams, his wife and confidante, directed her invective at the printing press of Benjamin Franklin Bache, who possessed “the malice and falsehood of Satan.”

Bache's Aurora newspaper would eventually publish accounts about electoral collusion in 1798 with our former British enemies, who allegedly spent more than $800,000 to influence the midterm elections and buy off  Adams’ support. The Aurora had also chastised Adams for appointing family members and in-laws to government positions as personal secretaries and diplomats in Berlin.

For most journalists and observers of the period, a line in the sand had been drawn over the Jay Treaty in 1795, a questionable pro-British trade and settlement agreement that had been engineered by Hamilton and hammered out by Justice John Jay, which exacerbated the Federalist-Republican divide. While the treaty negotiated the final withdrawal of British troops from the continent, it also provided most-favored-nation status to Britain, and openly shifted the American alliance away from the French.

Bache declared that the new nation had “realigned with a despotic rather than a republican state,” and charged the treaty with serving the financial interests of a handful of wealthy merchants.

The Aurora went on the attack. After publishing a leaked letter from the French foreign minister that demonstrated his nation had no war intentions against the United States, as the pro-British Adams had suggested, Bache was arrested for sedition — before the notorious Sedition Act had even been passed. His real crime was the embarrassment of Adams’ bungling of diplomatic relations with France. Bache feared the ramifications of Adams’s “war speech” to Congress in the early summer of 1798, in which the president had ramped up the American military arsenal for an apparent conflict with France. When the initial charges against Bache were dropped, a Federalist-appointed judge quickly issued another arrest warrant for the Aurora editor, who was hauled to the Philadelphia jail. He was charged with “tending to excite sedition, and opposition to the laws, by sundry publications.”

Using the pretense of a threatened nation, invoking unholy French alliances among the American press and supposed spies, Congress passed the Sedition Act of 1798 with the intention of clamping down on the emerging free press hailed by Bache. “To write, print, utter or publish, or cause it to be done, or assist in it, any false, scandalous, and malicious writing against the government of the United States, or either House of Congress, or the President” — this was now a crime, warranting imprisonment for journalists and all others. Adams did not stop with the press: Congress passed an Alien Friends Act to grant the president the powers to deport anyone he deemed dangerous.

A feisty member of Congress from Vermont, Matthew Lyon, became the first person jailed under the Sedition Act for publishing a letter in his newspaper claiming that Adams displayed “a continual grasp for power [and] unbounded thirst for ridiculous pomp, foolish adulation and selfish avarice.”

In a letter to a fellow Republican in Congress, Jefferson quietly cast Lyon’s judges as “objects of national fear.” The vice president, who would later hail the period as the “reign of witches,” admitted his own alarm at the witch hunt. “I know not which mortifies me most,” he wrote, “that I should fear to write what I think, or my country bear such a state of things.”

Released from jail, Bache wouldn’t back down. He disregarded the mobs that attacked his newspaper office repeatedly with rocks. “Like the British monarch, John Adams now has the Alien and Sedition Acts to silence his critics,” he wrote to his readers. He defended the First Amendment in defiance. Legions of other newspapers and critics defied Adams and the Federalists.

While Bache died a few months later from the scourge of yellow fever, the Sedition Act witch hunts would continue for another year with serious consequence. Before his death, Bache had challenged other editors: Is there “any alternative between an abandonment of the constitution and resistance?”

A Federalist-baited mob nearly murdered another Aurora editor, William Duane, when it dragged him into the streets and took turns brutally beating him in a circle.  As fearless as Bache, Duane recognized that each prosecution and trial of a newspaper editor disgraced the administration in front of the public. This included members of Congress, whose silence in the face of the treacherous act had become noticeable: “If they have a sense of honor left,” Duane wrote, “their silence ... can only disgrace themselves.”

By the election of 1800, according to Jefferson, the newspapers remained the “standard bearer for the political opposition.” He framed the election as whether “republicanism or aristocracy would prevail.”

Jefferson prevailed, and he would praise journalists like Duane and the Aurora for “rallying” the “whole Union,” and providing “comfort in gloomiest days.”

The Alien and Sedition Acts expired three days before Jefferson’s inauguration. All those under prosecution, such as Duane, were pardoned. “The history of the monarchical forms of government have taught us,” Duane wrote triumphantly in the Aurora, “never to trust power to any man” and to “preserve inviolate the freedom of the press.”

Never have those words been truer than today for our nation, and our president.