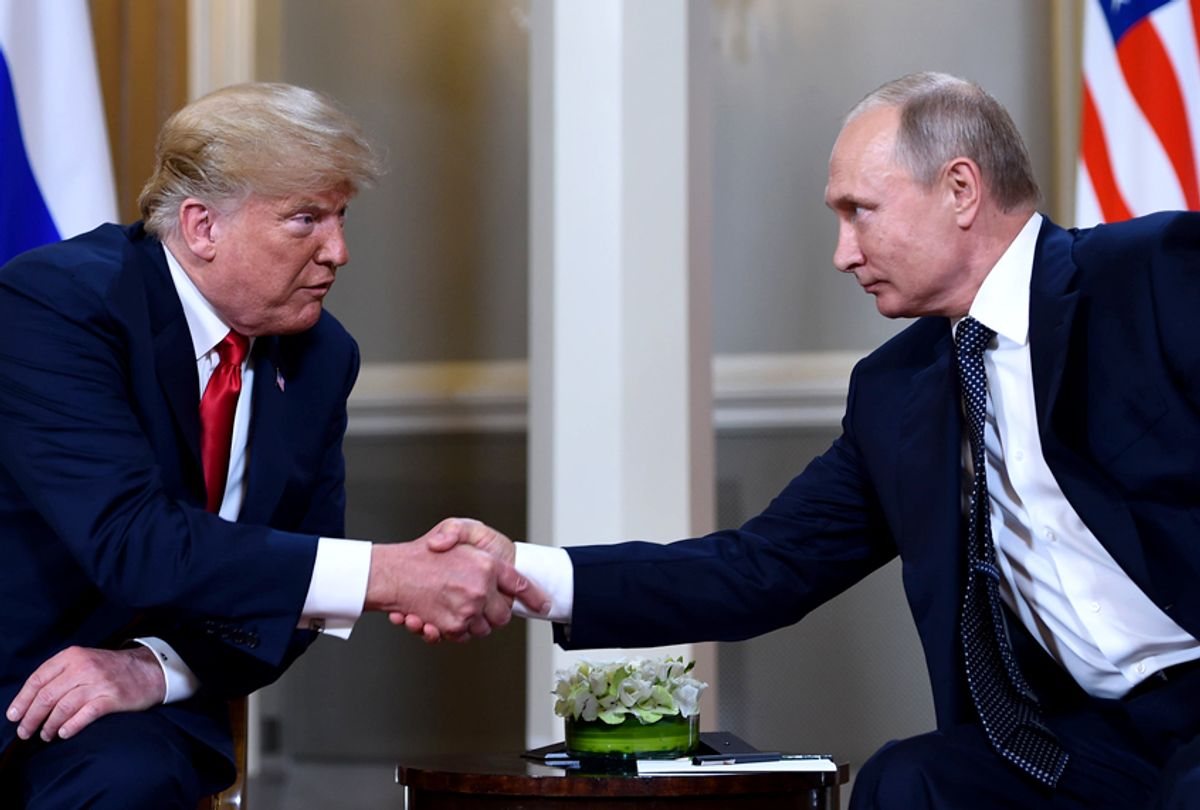 Less than 24 hours after affirming he had "full faith" in the U.S. intelligence community's conclusion that Russian had attempted to meddle with American democracy, President Donald Trump rejected the findings of his top spy.

When asked at a Cabinet meeting if Russia was still targeting the U.S., the president responded "no" to White House reporters.

Trump's claim directly refuted Director of National Intelligence Dan Coats, who told the Senate in sworn testimony in February that "the United States is under attack."

“There should be no doubt that Russia perceives that its past efforts have been successful and views the 2018 midterm U.S. elections as a potential target for Russian influence operations,” Coates testified before the Senate Intelligence Committee.

After his summit with Putin in Helsinki, Finland, Trump told journalists at a news conference that he had taken Putin at his word over Coates.

"Dan Coats came to me, some others. They said they think it's Russia," Trump said. "I have President Putin. He just said, 'It's not Russia.' I will say this, I don't see any reason why it would be."

The president's comments lead Coates to release a statement hours later that read:

"The role of the Intelligence Community is to provide the best information and fact-based assessments possible for the President and policymakers. We have been clear in our assessments of Russian meddling in the 2016 election and their ongoing, pervasive efforts to undermine our democracy, and we will continue to provide unvarnished and objective intelligence in support of our national security."

In the wake of mounting criticism from members of his own party, Trump attempted to correct course on Tuesday afternoon at the White House. In his remarks, the president claimed to the world that he had simply misspoken by one word during his press conference in Finland. Trump further explained that he had intended to say he did not see any reason why it "wouldn't" be Russia – a double negative.

"I thought that I made myself very clear, but having just reviewed the transcript, I realized that there is a need for some clarification," Trump said as he walked back his controversial comments at the White House. "The sentence should have been, 'I don't see any reason why I wouldn't, or why it wouldn't be Russia.'"

In tandem, Trump asserted to Americans on Tuesday that he had "full faith" in U.S. intelligence agencies.

On Wednesday, the president also reiterated his claim that no president in the history of the U.S. has ever been as tough on Russia as him.

Members of the media were, in fact, critical of the president after he cozied up to Putin in Finland. In the opening minutes of "Deadline: White House" on Tuesday, MSNBC host Nicolle Wallace slammed Trump's claim that he misspoke as a "feeble" attempt at cleaning up a mess.Wallace, who served as the White House director of communications in the George W. Bush administration, pulled from her own experience to explain why she considered Trump's claim that he had misspoken to be "a shameless lie."

"You know how you know that’s a lie?" Wallace asked. "You know how long it takes for a president to get a transcript or a clip of your press conference? About 60 seconds."

Wallace also found parallels between the president's current effort to climb out of hot water with two of his other most controversial moments as a politician.

On Twitter, CNN anchor Jake Tapper reminded Americans that the views Trump had expressed in Helsinki – "an affinity for Putin and skepticism about the U.S. intelligence community’s assertions about Russia" – reflect a consistent worldview that has remained unchanged over time.