Scott Pruitt may be gone, but the EPA's pro-pollution agenda remains intact 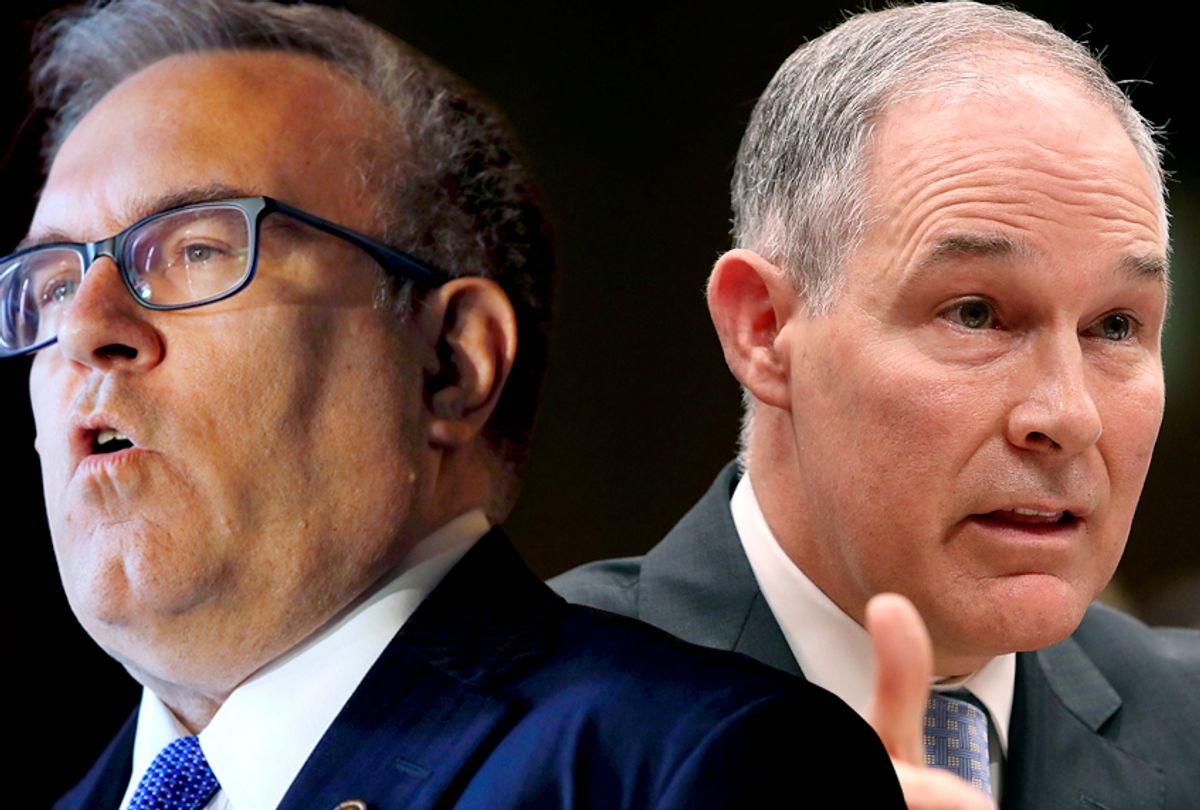 Environmental Protection Agency head Scott Pruitt, after months of bad headlines detailing his comically over-the-top levels of self-dealing, was finally drummed out of his job. Now that he's out of government, Pruitt can no doubt enjoy the punishing consequences of life as a corporate lobbyist. But while Pruitt is no longer around to enjoy first class tickets and fancy hotels on the taxpayer dime, the more serious part of his agenda — destroying the EPA's ability to use science to protect the environment — continues at full speed without him.

Under acting director Andrew Wheeler, who most experts assume will be President Trump's pick to be the permanent head of the EPA, it appears that everything is full steam ahead when it comes to Pruitt's mission to push legitimate science out of the agency's decision-making process. This time, Trump officials will be able to promote their anti-science agenda at EPA with less of the media attention Pruitt's antics attracted.

On Tuesday, the EPA held a hearing regarding a Pruitt-era rule proposal with the misleading name "Strengthening Transparency in Regulatory Science." Despite that lofty-sounding title, the rule's purpose would be to ban EPA from using huge swaths of research about the impacts of pollution on human health. They would do this by punishing scientists who follow ethical guidelines about protecting patient privacy by claiming they are not being "transparent" by maintaining anonymity for people in the study.

“When study subjects are in research, we protect their privacy, so that they feel comfortable sharing confidential medical information and family history with the researchers," explained Jennifer Sass, a senior scientist at the Natural Resources Defense Council.

"The proposed rule would impede, if not eradicate, the EPA’s ability to protect Americans from significant risks to human health and the environment by limiting the scope of research that the EPA could consider in making decisions," Rep. Suzanne Bonamici, D-Ore., who appeared at the EPA to testify against the hearing, said in a press release.

READ MORE: This invasive plant that burns people who touch it is a real-life Audrey 2

During the hearing, Rep. Paul Tonko, D-N.Y., also spoke out against the proposed rule, calling it "a thinly veiled campaign to limit serious and highly credible science" from being used for regulatory purposes at the EPA.

Sass, along with a number of other scientists, testified in opposition to the rule on Tuesday, pointing to the fact that many existing EPA regulations that most people consider uncontroversial were based on research that would be forbidden under this proposed new policy.

For instance, EPA regulations geared towards reducing air pollution have been based on the famous Harvard Six Cities Study, which demonstrated that air pollution leads to higher mortality rates, and that people living in polluted areas died, on average, two to three years earlier than those who didn't. Similarly, the EPA rule reducing lead in drinking water was based on research that showed that lead negatively affects child development — research that would now be barred from consideration because the children's privacy was respected in the published data.

As Sass explained, these kinds of studies measuring existing effects are critical. It's not as if scientists can run lab experiments where they deliberately expose human beings to radiation or lead poisoning to see what happens.

While many Trump-era proposals at the EPA have received a huge pushback from the scientific community, the reaction to this faux-transparency rule has been loud even by the standards of the Pruitt regime.

On Monday, a group of 69 organizations, including the American Medical Society and the American Association for the Advancement of Science (AAAS), released a statement in which they indicated that they "support the goal of improving the transparency of science," but not when doing so would "reveal confidential patient information."

Similarly, the editors of Science, Nature, and the Proceedings of the National Academy of Sciences issued a statement arguing against exposing "data sets featuring personal identifiers" and indicating that it "does not strengthen policies based on scientific evidence to limit the scientific evidence that can inform them."

There is "no lipstick that can be put on this pig," Sass said, adding that the only solution, as most scientific experts who have spoken out agree, is to withdraw the proposed rule.

Unfortunately, there's reason to believe that Wheeler, while not as flamboyantly corrupt as Pruitt, will continue the former EPA chief's strategy of using bad faith arguments and Orwellian misdirection to block regulators from using scientific research that shows the impacts of pollution on human health. Before joining the EPA, Wheeler was a coal industry lobbyist who represented a climate-change denier. That history doesn't suggest someone who is above using deceptive methods to undermine scientific evidence.

The fact that this rule is going forward at all is a testament to how little has changed at the EPA, despite the shift in leadership. If Wheeler allows this rule change to go forward despite the overwhelming outcry from the scientific community, that will make clear that he is just as committed to ignoring science, public opinion and the health and safety of Americans as Pruitt was before him. Even if he makes more appropriate choices in travel preferences and living arrangements.

Understanding "The War on the EPA"

How Scott Pruitt, who sued the EPA many times, wound up running the agency under Donald Trump.