Scott Pruitt's corruption wasn't the real problem: What follows at EPA could be worse

Pruitt's replacement will be every bit as much an industry shill, but will likely do a better job of hiding it 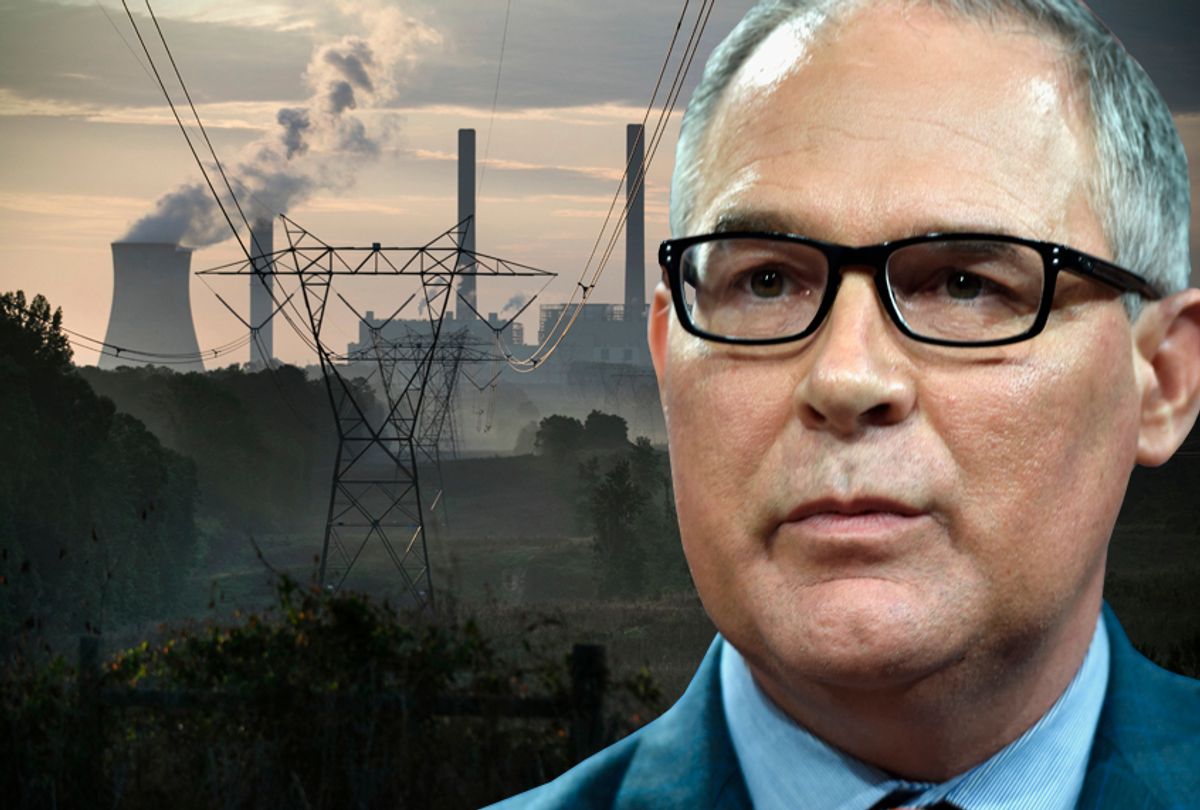 Scott Pruitt has finally resigned as head of the Environmental Protection Agency after the opening of yet another federal probe into his behavior, this one regarding whether he committed a federal crime by destroying records to conceal his unethical activity. Liberal social media is aflutter with excitement, eager not just to witness real consequences for one of the most corrupt members of President Trump's administration, but also for anything resembling good news after a horrific onslaught of stories about human rights abuses and the dismantling of American democracy.

That's understandable. Pruitt's ouster bolsters the faith that dogged pursuit of this administration's rampant corruption can pay off. It bolsters the faint glimmer of hope that, if Robert Mueller can show that Russia's leaders, spies and oligarchs have conspired with Trump, there could possibly be some accountability for that.

But for me, it's hard to get too excited. For one thing, Pruitt isn't going to face justice. He probably just realized that, if getting rich is what he wants — and his corrupt behavior suggests that was a strong motivating factor — then being a corporate lobbyist will be a better gig.

More importantly, whomever Trump ultimately replaces Pruitt with will be just as bad, but will likely be a little smarter, not to mention less blatantly obvious about using taxpayer money to finance an opulent lifestyle. In other words, this person could actually be worse than Pruitt, because he'll almost certainly be more effective at destroying the environment without garnering the negative attention that Pruitt has attracted week after week since his arrival in Washington.

As I wrote last month at Salon, Pruitt's corruption is bad, but his actual agenda at the EPA is far more serious. For a year and a half, Pruitt has been so aggressive with his right-wing agenda that one starts to suspect he's not just anti-regulation, but openly pro-pollution. Not only has he tried to undo regulations meant to curb greenhouse gas emissions, he has also worked to gut regulations meant to keep water and air clean for human consumption. While wasting money is certainly a bad thing, it's far more consequential that Pruitt is devoted to wasting the only planet that humans have to live on. Whoever follows him will have the same exact agenda.

Right now, most EPA watchers believe that Trump plans to replace Pruitt with Andrew Wheeler, a former coal lobbyist who is now the deputy administrator at the EPA.

"The line on Wheeler from people in the know is that he’s essentially Scott Pruitt’s ideological twin — but that his many years as a Washington insider have endowed him with a political savvy that Pruitt sorely lacks," Jeff Turrentine of the Natural Resources Defense Council wrote in April.

One of Wheeler's biggest clients was coal baron Robert Murray, a man who says climate change is "not scientifically based" and "an agenda," which is a right-wing dog whistle for the conspiracy theory that holds that climate change is a hoax concocted by communists to destroy capitalism.

Meanwhile, the past week was one when more heat records were set worldwide. In northern Siberia, temperatures were 40 degrees above normal, hitting 90 degrees Fahrenheit. The heat is so bad in the British Isles that roads and roofs have buckling. More than 30 people died during a record-setting heat wave in Quebec. And Quriyat, Oman, just posted the highest minimum daily temperature ever recorded, on a day when the thermometer never fell below 108.7 degrees.

Unfortunately, it's notoriously difficult to get people to care about this issue, even as they personally watch their air conditioning bills rise and find it impossible to walk  to or from their cars without being covered in sweat. Regulatory structures meant to reduce carbon emissions and other forms of pollution are complicated, as are the legal mechanisms that Pruitt and his minions have used to undo existing environmental regulations. A lot of what needs to be done to slow climate change is boring. It's about updating equipment on power plants, tweaking fuel efficiency in cars, installing solar panels and banning inefficient light bulbs and appliances.

It's just a lot sexier for the news to cover stories about Trump officials flying first class or flanking themselves with drug-lord levels of security or leveraging their influence to live virtually rent-free than to cover an EPA head who argues against a mercury regulator because it also filters out other dangerous pollutants.

Which is why, whether it's Wheeler or some other industry apologist, whoever replaces Pruitt will be far worse for the country and the world than Pruitt was. This person will almost certainly be able to enact Pruitt's pro-pollution agenda while staying out of the headlines. As long as this person keeps a lid on how far he'll go to get fancy lotions and expensive meals at taxpayer expense, he'll be able to clear the path for oil and coal companies to bake our planet like a casserole without much pushback from the media or the public.

He'll probably be even more efficient at it, because he won't be distracted by corruption scandals. By this time next year, when another round of heat records is being set worldwide, how many Americans will even be able to name the EPA head who is hard at work undermining environmental regulations?

Scott Pruitt and "The War on the EPA"

Frontline documentary explores the strange history of a man who sued the EPA 14 times, before he ran it.