Trump-regret syndrome is spreading among Republicans after Helsinki: How far will it go?

Many Republicans are turning their backs on Trump after the Helsinki disgrace. Will they come crawling back? 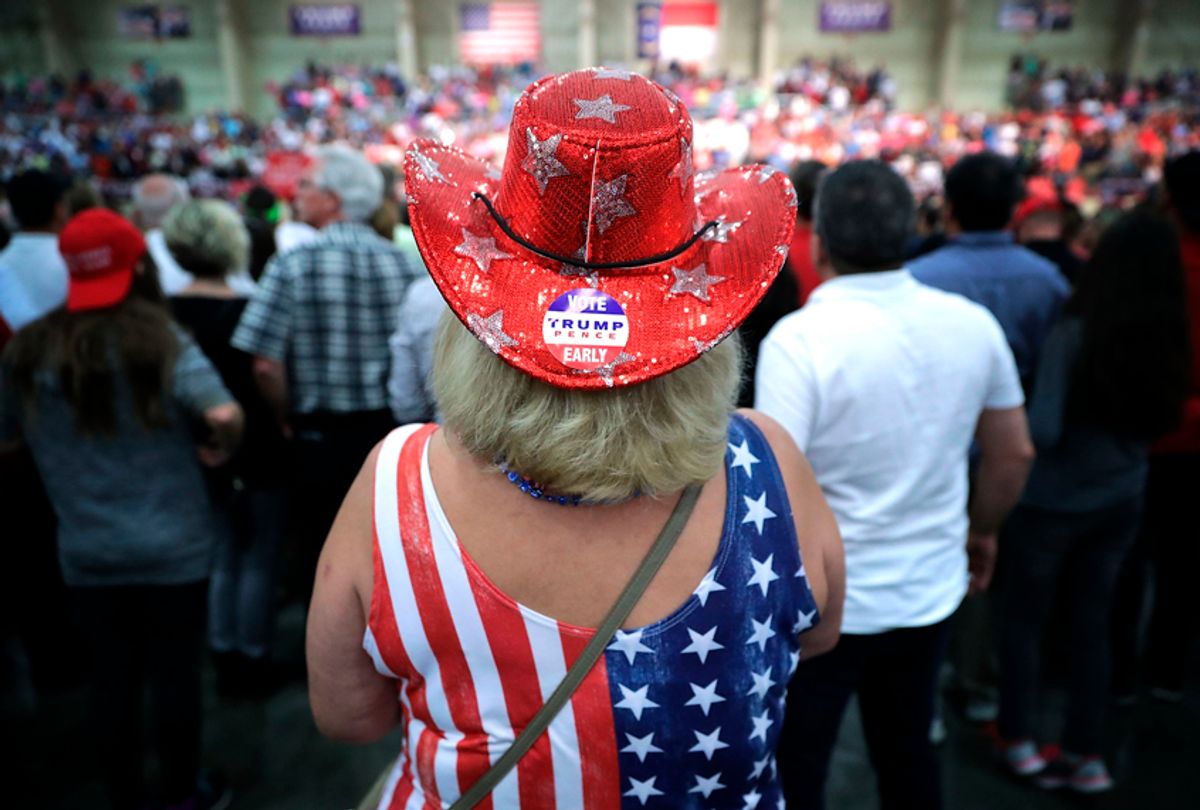 As a serving member in a state Republican Party organization, my acquaintance has taken a great amount of grief over the past three years. When Donald Trump first arrived on the political scene in 2015, he urged his colleagues to hear the billionaire mogul out. He appreciated the tough talk on immigration, the no-nonsense attitude that both differed from regular politicians and dared put them in their place. He thought Trump might not be the worst response to the Barack Obama presidency, which he considered weak and conciliatory.

After Trump wrested away control of the party from the GOP establishment, my acquaintance bought a Make America Great Again hat and slapped a Trump/Pence sticker on his car’s bumper. He met the nominee as a delegate to the Republican National Convention in Cleveland and rolls his eyes when his liberal colleagues and relatives post their Robert Mueller fantasies on social media. He’s stood by Trump when he criticized Gold Star families, waffled on condemning the neo-Nazis who rioted in Charlottesville and, until this week, has never so much as considered the possibility Trump had colluded with Russia.

“I’ve had it,” he said. “There is some shit I will not eat. I’m done apologizing for Donald J. Trump. Done.”

This repudiation was earned after Monday’s disastrous press conference in Helsinki, where President Trump stood side-by-side with Russian President Vladimir Putin, a despot who has cracked down on his citizens’ individual freedoms and has quite likely ordered the murders of dissidents, journalists and political opponents. It was bad enough, my acquaintance fumed, that Trump didn’t challenge Putin’s record, but the coup de grâce came when the president criticized U.S. intelligence agencies’ assertion that Russia interfered with our elections and instead supported Putin’s denial of meddling.

That disbelief echoed throughout the Republican Party on Tuesday, even as Trump half-heartedly tried to claim he had misspoken -- an entirely typical non-denial denial. Trump supporters and critics alike struggled to wrap their heads around his bizarre display of deference to a tyrannical foreign leader. Republican congressional staffers told me privately they were still trying to come to terms with what had taken place in Helsinki. Some told me their worst suspicions had been realized, while Trumpian true believers wrestled with emerging doubt.

“It’s already been a long week,” one said, “and it’s only Tuesday.”

This sudden skepticism, in those I’ve talked to, has its roots in the indefensibility of Trump’s performance, which was either a gross display of international domination or something more sinister. Fox News, which has made a living defending Trump and exulting his every decision, even featured audible dismay as host Neil Cavuto called the display “disgusting,” a sentiment seconded by Shepard Smith, who went as far as to call it “shameful.”

The rank and file of the Republican Party spoke out in similar disbelief. Sen. John McCain, R-Ariz., offered the strongest criticism, calling it “one of the most disgraceful performances by an American president in history.” Accompanying his statement were the usual concerned messages from the likes of Marco Rubio, Bob Corker, Jeff Flake, Lindsey Graham, and House Speaker Paul Ryan, the entire lot of them seemingly realizing, as the day played out, that their pursuit of electoral power and legislative agenda had tied them to a very large stone that was sinking very quickly.

In the summer of 2016 I found myself sweltering in Houston. I was attending the Green Party National Convention, a haphazard affair that was far more disorganized and thrown-together than I could have ever imagined. When I walked up to the media table the volunteers couldn’t find my press badge, so they handed me a blank one and a Sharpie to make my own, without ever bothering to check my identification.

The Greens were busy fighting among themselves in the small college auditorium where they held their national gathering. There were several candidates for the presidential nomination that Dr. Jill Stein was destined to win. Each of them was taking their allotted time to push their agendas and settle old scores. In their seats the Greens around me were handicapping the presidential contest between Trump and Hillary Clinton, but still hoping that Clinton might get knocked out before November and get replaced by Bernie Sanders, her defeated rival.

The impetus for this entirely imaginary upheaval would be the now-legendary 30,000 emails belonging to Clinton that have now seemingly been lost to time. Among her most devout critics it was widely rumored and believed that these emails would eventually be uncovered and might contain incriminating evidence that would disqualify her from office. These revelations were rumored to include massive financial fraud, gross neglect of duty and possibly proof of a conspiracy involving the Clintons and the terrorist group ISIS.

Members were buzzing with this gossip when a projector turned on and WikiLeaks founder Julian Assange appeared via an internet chat system. Assange, currently holed up in the Ecuadorian Embassy in London, spoke as a special guest of the Green Party at its convention and repeatedly lambasted Hillary Clinton and the Democratic Party, likening the former senator and secretary of state to a sexually transmitted disease. While he spoke members of the crowd shouted to his projected face, asking if he was in possession of “the emails.”

Before Stein gave her address to the convention as their presidential nominee, she was quoted as saying there was “no question” that Assange was a hero. This declaration was, strangely enough, in line with an about face the Republican Party was having with Assange, after WikiLeaks had released stolen Democratic National Committee emails that cast doubt on the organization’s fairness in the primary campaign between Clinton and Sanders .

Loudest in his reversal was Fox News heavyweight Sean Hannity, who interviewed Assange and told him that “Part of me, in the beginning, was conflicted about you." But following the DNC leaks, Hannity now applauded Assange and wished him well, saying, “I do hope you get free one day and wish you the best.”

This past Friday, Deputy Attorney General Rod Rosenstein announced that 12 Russians associated with that nation's military intelligence were being charged with conspiring to meddle in the 2016 presidential election. Many of the charges resulting from the hacker known as Guccifer 2.0 passing the DNC emails to Assange and WikiLeaks. The indictments made clear, however, that Guccifer 2.0 was in fact a Russian front.

In their haste to condemn their political rival Hillary Clinton, both the Green Party and conservatives like Sean Hannity were quick to align with Assange. Recent developments have clearly painted the DNC leaks in a much more sinister light and could possibly lead to future charges against Assange, WikiLeaks or both.

Political opposition can make bizarre bedfellows. The Green Party, so long focused on far-left causes and environmental protectionism, was chanting “Lock her up! lock her up!" like the crowd at a Trump rally. Sean Hannity, a self-proclaimed patriot and Reaganite, was more than willing to praise a shady info-radical who was happy to compromise American goals as long as he had the goods on the Democratic Party. Now, with the passage of time and new evidence that has come to light, perhaps the shine has come off these new partnerships.

Asked for comment on the indictments, both Jill Stein and the Green Party declined to be direct.

Stein's office replied with the following statement: “Whether or not these allegations are ultimately proven in a court of law, we hope that Congress will take decisive action to improve cybersecurity and protect our elections from potential threats, foreign or domestic – as we have been urging for over a year and a half.”

The Green Party’s statement reads this way: “We are not backpedaling from our support of transparent and ethical government.”

Neither Stein nor the Greens would comment whether they regretted Assange’s inclusion in the 2016 Green Party convention in light of last week’s indictments. Stein would not say whether she still considered Assange a hero.

Sean Hannity did not respond to my requests for comment.

In conversations I’ve had with people who worked on the 2016 Trump campaign, the one topic that always comes up is regret. Occasionally someone will tell me he wishes he had suggested this policy or this talking point, the type of mulligan that all campaign staffers always carry with them. But mostly it comes back to the decision to join the campaign in the first place.

Almost to a person, former Trump campaign staffers tell me they regret tying themselves to Donald Trump for a myriad of reasons. Some have found it nearly impossible to find another job in politics as the brand itself has spoiled. They even find it difficult to get work in the private sector as the stink of Trump travels with them. It’s a problematic stigma to carry, especially for younger people who joined the campaign because it was an upstart operation that most political veterans were wary of from the start, meaning there was a vacuum they could fill and finally get their feet in the door.

Some joined purely to get that experience. Others believed Trump simply had no chance to win. They expected he’d drop out sometime after the Iowa caucuses and either release his staff to be absorbed by winning campaigns or else carry them off to a Trump-owned cable news operation that had been rumored for months.

But something happened: Trump gained momentum.

With every misstep, experts and pundits predicted his demise. Many on his staff hoped that would eventually come. They had never agreed with him politically, and had had seen their campaign veer into truly troubling territory.

“There came a point,” one member of the early Trump team recalled, “where you look in the mirror and you don’t know who’s staring back anymore.”

It’s a sentiment, I can only imagine, that many Republicans -- and others who have compromised their principles in the service of ambition and anger -- can certainly empathize with, as the heavy stone sinks deeper with every passing day.

The collapse of progressive Wisconsin