At the same time, Spicer said there has been "no evidence" of collusion between the 2016 Trump campaign and Russia 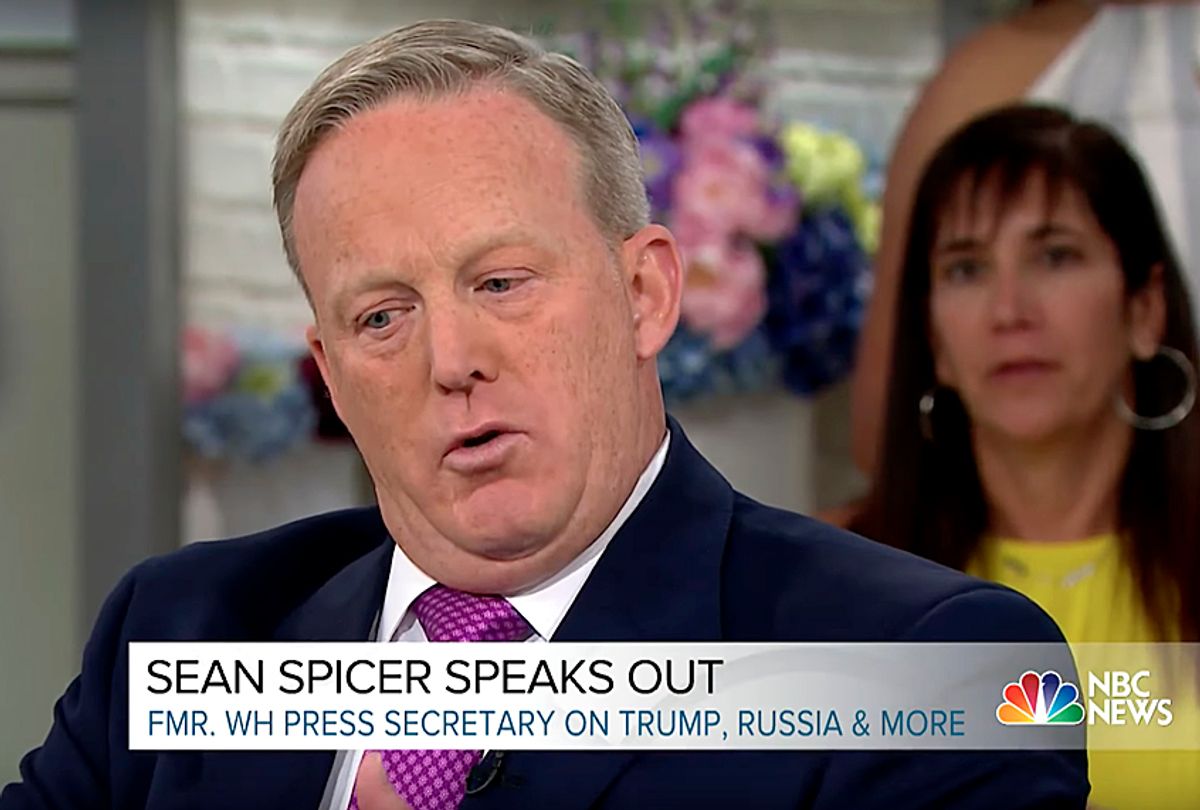 Contradicting an assertion often made by President Donald Trump – the commander-in-chief whom he served – former White House Press Secretary Sean Spicer said he does not believe that special counsel Robert Mueller's Russia investigation is a political witch hunt.

"As of now, I see no evidence that it is," Spicer said Thursday during an interview on the "Today Show" on NBC News.

Spicer, who has been promoting a new book and a talk show pilot, also admitted that he believes Russia interfered in the 2016 presidential election. However, the former Trump staffer added that there is "no evidence" of collusion between the president's campaign and one of America's greatest adversaries.

"I think it's very important to be clear that Russia meddled in our election," Spicer said. "And, there's no evidence of collusion."

Notably, Spicer did not criticize his former boss for his widely-panned remarks this week in Helsinki, Finland, in which Trump said he believed Russian President Vladimir Putin's denials that his country did not wage a campaign in an attempt to influence the American election. Trump's words directly contradicted the conclusions of the U.S. intelligence community.

In a reversal, Trump claimed to the world that he had simply misspoken by one word during his press conference in Finland. The president explained that he had intended to say he did not see any reason why it "wouldn't" be Russia – a double negative.

"I thought that I made myself very clear, but having just reviewed the transcript, I realized that there is a need for some clarification," Trump said at the White House. "The sentence should have been, 'I don't see any reason why I wouldn't, or why it wouldn’t be Russia.'"

Sarah Huckabee Sanders, the current White House press secretary, had to further clarify Wednesday that the president agreed with the finding of American intelligence agencies that Russia is also eyeing U.S. elections this November. Earlier in the day, the president had responded "no" when asked if Russia was continuing to interfere. Sanders then disputed his answer, claiming that Trump responded "no" to taking questions from reporters – and not to the question itself.

In an interview conducted after his return from Finland, Trump said he holds Putin personally responsible for Russia's election interference.

"Well, I would, because he's in charge of the country – just like I consider myself to be responsible for things that happen in this country," Trump told CBS News. "So, certainly as the leader of a country you would have to hold him responsible, yes."

Two hours later, Spicer addressed his tumultuous six-month tenure in the White House while appearing for a second interview on NBC – this time with the former Fox News host Megyn Kelly.

Kelly spent most of the pair's time together grilling the former Trump aide about the misleading statements he made during his White House tenure and trying to get him to admit that Trump was a liar – a claim he had refuted on the first hour of the "Today" franchise earlier that morning.

Kelly started the interview by asking Spicer if he felt any "empathy" for his replacement, Sarah Huckabee Sanders. When Spicer indicated that it "takes a lot of preparation on a daily basis" to do that job, Kelly retorted: "Critics would say it takes an ability to disassociated from the truth."

Kelly took Spicer all the way back to his first — and arguably most controversial — press briefing in January 2017, in which he declared without evidence that Trump's inauguration ceremony yielded "the largest audience to ever witness an inauguration — period—  both in person and around the globe." Reports suggested turnout for Trump was two-thirds less than it was for former President Barack Obama in 2009. Although Spicer had previously admitted he "regrets" those words, he would not admit to Kelly that it was, in fact, a lie.

"I'm saying that I could have done that a heck of a lot better," Spicer said. "But, the point was that what we were conflating with the number of people stating one position versus what I was trying to do. And, admittedly, not well."

"And not truthfully," Kelly shot back to applause from her audience.

For her part, Kelly has also declined calling Trump a liar on her own show. When another former White House communications staffer appeared on her show — Dan Pfeiffer, who worked in the Obama administration — Kelly did not support his assertion that Trump was a liar.

"I prefer to say he does not have an adult relationship with the truth," she said in June.