New studies on Ötzi, the well-preserved Tyrolean from 3300 B.C.E., reveal his diet and tool usage in new detail 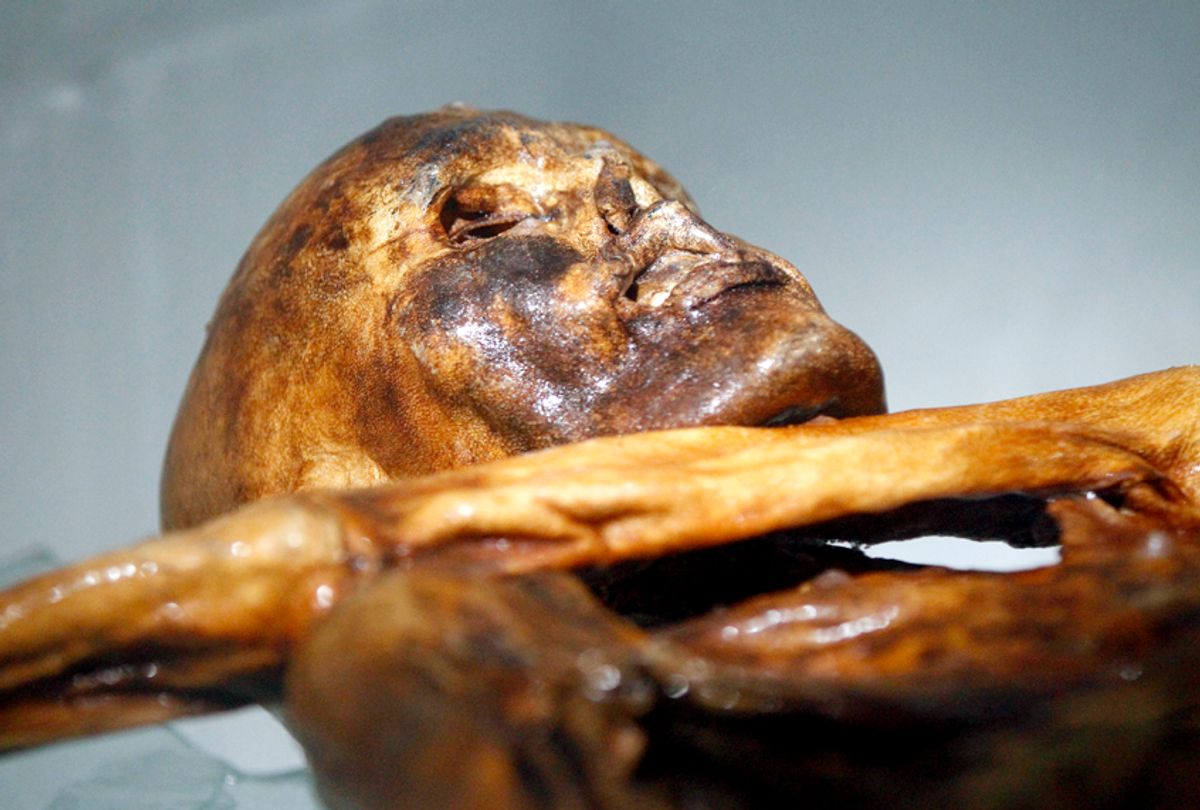 The mummy of an iceman named Otzi, discovered on 1991 in the Italian Schnal Valley glacier. (Getty/Andrea Solero)
--

In the 27 years since “Ötzi” the Iceman, a 5,300-year-old mummy, was found in the frosty mountains of South Tyrol, Italy, he’s been the subject of ever-growing public interest and ever-evolving scientific inquiry.

Two recent studies give insight to Otzi’s life as a a European from the Copper Age; a glimpse of ancient history that we would not otherwise be able to see. One of the studies, a piece recently published in PLOS One, sheds new light on Otzi’s tool usage and sourcing, studying the tools that would found with him when he died: a dagger, two arrowheads, an endscraper, a borer, a small flake and an antler retoucher. According to the authors of the study, all of the tools were made from chert, (a form of sedimentary rock), or are related to chert working.

According to Dr. Patrick Hunt, an archeological scientist who works for National Geographic and teaches at Stanford University, these new findings are significant because they demonstrate a more sophisticated knowledge of trade and transport than earlier studies.

Although it seems Otzi could not make his own tools, according to the study he did have the ability to modify them at a “medium to good skill level.” According to Hunt, some of the last wear on the tools indicates he was trying to prepare his tools for later use.

Dr. Ursula Wierer, an author of the study, told Salon via email that study helped provide more detailed information about the toolkit.

“Chert tools could have had a long tool life, undergoing numerous reparations and modifications[...]. Otzi’s tools tell us furthermore that the essential personal toolkit could also be very limited, just a few instruments for cutting, scraping and boring,” Wierer wrote.

She noted that the discoveries about the tools help provide new information on life during Otzi's age.

“By comparing the shape of this tools with the ones of other archaeological sites we found out that some are quite common (arrowhead 14 in Northern Italian sites, endscraper in Swiss sites),” Wierer told Salon. “Information about cultural contacts on a medium range (40-80 km) is furthermore given by the provenance of the chert raw material. It originates from at least three different areas. This means habitual contacts, leading to cultural and economic exchange among groups.”

The other Iceman study, which was recently published in Cell, showed for the first time what was in Otzi’s stomach at the time of his death: fat, wild meat, and cereals.

“Compared to our current meals was the Iceman’s food much less processed. Just think about the whole grains and still intact muscle fibers we detected. We think that this unprocessed food influenced the gut microbiome composition and on a long run the general physiology of the Iceman,” Lead author of the study Frank Maixner told Salon via email.

Maixner added that this study is significant because not only was it an interdisciplinary study that employed collaborative and cutting-edge methodologies, but also this type of research is the first of its kind.

“The first in-depth analysis of the Iceman’s stomach contents offer a rare glimpse of our ancestor’s ancient dietary habits including food processing techniques and the planning for a long alpine trek. That someone from the Copper Age knew that is remarkable in and of itself,” Maixner told Salon.

Hunt noted that one of the more intriguing aspects of Otzi was his apparent knowledge of medical practices. Hunt explained that Otzi had several illnesses, but also carried around items, such as particular fungi, to help treat his ailments.

“He’s a one-off,” Hunt told Salon, adding that because Otzi is the only evidence of his era, it is difficult to deduce whether or not his level of knowledge was common or unusual.

Otzi had 58 tattoos on his body, Hunt said, which also signified a more advanced level of medical knowledge than was originally anticipated.

“There was some way that the carbon stuck under his skin in the tattoos, and it was acting as pain relief,” Hunt told Salon. “They’re not clan markings, they’re over joints.”

For Wierer, one of the greatest impacts of Otzi’s discovery has been the overall interest and drive toward researching and learning about his existence, even decades after he was found.

“An important impact is the diffusion of the scientific results among the wide public, which shows a special interest for this find throughout the world,” Wierer wrote. “Although his ‘distance’ in time being 5,300 years old, Otzi appears as very human — with his clothes and carefully built equipment, with his physical [characteristics] and health problems, [and] with the open questions about his dramatic death.”