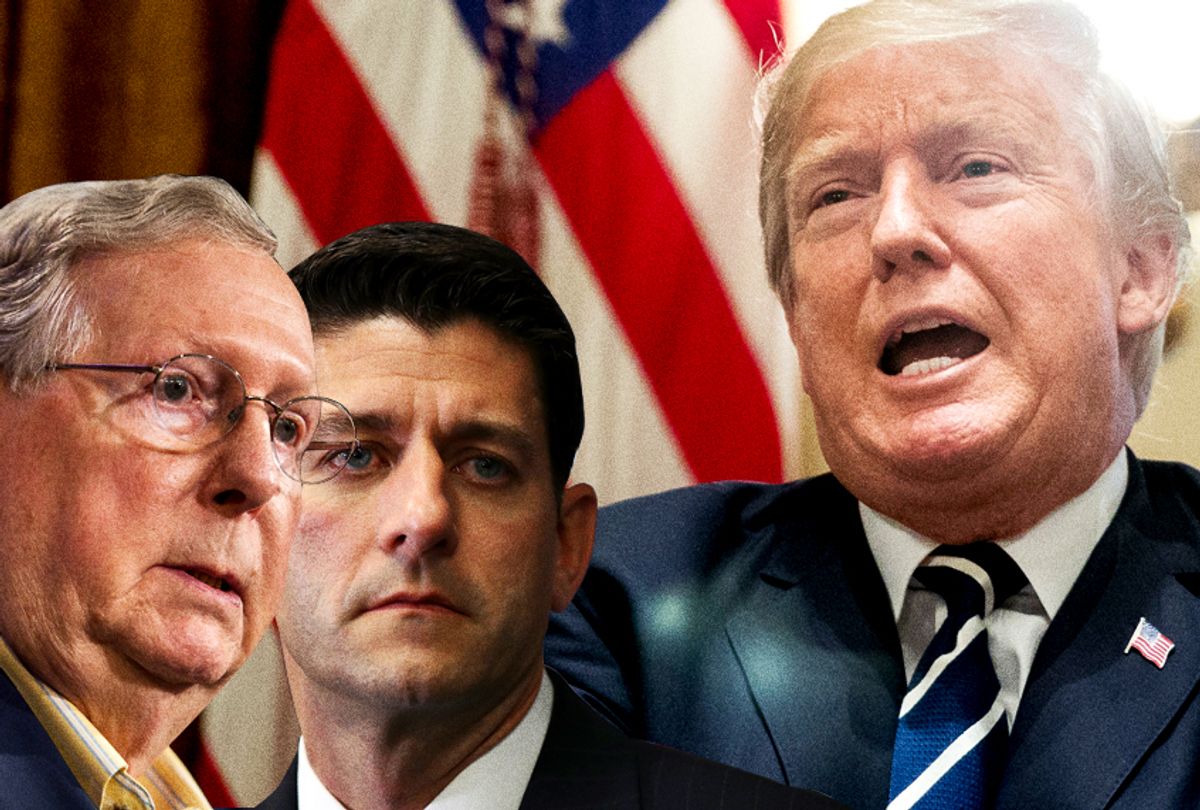 In the wake of his historically disastrous summit with Russian President Vladimir Putin, President Trump is bouncing back and forth like a ping-pong ball, grudgingly making halfhearted statements in support of the U.S. intelligence community with one breath and then contradicting it with the next. Republicans in Congress are desperate for him to clean up the mess he made, but he just keeps making new ones.

He issued a ludicrous walk-back on Tuesday (reportedly drafted by unctuous factotum Stephen Miller), insisting that he only made one tiny little mistake in an otherwise bravura press conference performance. Trump claimed that his now-notorious line, "I have President Putin, he just said it’s not Russia. I will say this: I don’t see any reason why it would be” should have been "I don't see any reason why it wouldn't be." This not only doesn't make sense, it doesn't in any way mitigate all the obsequious fawning and obvious willingness to ignore his own government's findings, even as Putin stood there and trolled him so hard he could barely keep from laughing out loud.

Since then, Trump has offered CBS News a muddled account of his supposed discussion about election interference during his two-hour private conversation with Putin:

Very strong on the fact that we can't have meddling, we can't have any of that -- now look, we're also living in a grown up world. Will a strong statement -- you know, President Obama supposedly made a strong statement, nobody heard it, what they did hear is the statement he made to Putin's very close friend. And that statement was not acceptable. Didn't get very much play, relatively speaking. But that statement was not acceptable. But I let him know we can't have this, we're not going to have it, and that's the way it's going to be.

Later on Wednesday, when asked by a reporter at a White House photo op if he believed the Russian government was planning to interfere in the upcoming election, Trump said, "No." (Press secretary Sarah Huckabee Sanders tried to spin it by claiming the president was responding to something else. When you see it in context, it's clear he was answering that question.)

This would be a direct contradiction of Director of National Intelligence Dan Coats, who gave a speech on July 13 in which he compared the current situation to the days leading up to 9/11, specifically calling out Russia as the most aggressive foreign actor penetrating American digital infrastructure and undermining U.S. democracy.

It's possible that Trump thinks Putin was so dazzled by his manly strength and charisma at the most successful summit in world history, that when Trump said, "We're not going to have it and that's the way it's going to be," Putin immediately put an end to the interference. More likely, Trump is just lying about all of it.

And it's just as probable that Trump knows the interference is ongoing and appreciates the help. Certainly, you have to start wondering if the Republicans in Congress aren't saying a little prayer of thanks to the Russian president every night. The way the midterm elections are shaping up, a little Russian "meddling" may be necessary for them to maintain their majority.

In the immediate aftermath of the Helsinki press conference it was clear that the GOP establishment was discombobulated. This seemed to be more than even they could tolerate. Some of the usual suspects like Sen. John McCain, R-Ariz., and Sen. Bob Corker, R-Tenn., criticized the president's performance in strong words while others expressed their "disappointment" and "concern." It appeared that a crack in the Trump support wall might be appearing.

But after the White House came up with its fatuous "I meant 'wouldn't' instead of 'would'" most Republicans are rushing to say how happy they are that Trump clarified his remarks and expressing their desire to move forward and let bygones be bygones. The relief among many of them is palpable.

Behind the scenes they're telling reporters that they've held hearings and imposed sanctions and defended NATO and it makes no difference. According to Politico:

Privately, senior-level Republican aides and lawmakers had a second message: what the hell do you want us to do? At the end of the day, senior Republican aides and lawmakers told us yesterday, it’s up to the president to conduct foreign policy. The Hill can -- and does -- criticize and conduct oversight. So the answer to the media feedback loop is: of course, Congress is not going to do anything substantive. They have no idea what more they should be doing.

They could hold real public hearings, censure the administration, protect Robert Mueller and, most importantly, take strong, decisive steps to protect the integrity of our elections. They could stop acting as Trump's accomplices and behave as a coequal branch of government.

But they aren't going to do that because they believe doing so would be political suicide, which they think is pointless. McClatchy reports that Republicans believe they can pick up as many as four Senate seats in November as long as Trump continues to dominate the airwaves with his endless whining about the "witch hunt."  This analysis comes from GOP operative Josh Holmes:

“Everybody thinks that President Trump is some kind of drag on the Republican Party, [when] in this case, he’s just the essential ingredient,” said Holmes, who’s helped engineer his party’s Senate strategy for the past 16 years as a chief aide to Senate Majority Leader Mitch McConnell, R-Ky.

“What the president is doing by continuing to discuss the investigation [into allegations of collusion between his campaign and Russia] and the quote-unquote ‘witch hunt,’ particularly on prime time Fox [News], is doing more to mobilize base voters than any legislative issue we’ve seen,” added Holmes.

In other words, colluding with a foreign country is all part of a cynical strategy to get out their voters in November.

It's unclear whether that will work. According to Jared Yates Sexton's article in Salon on Wednesday, there is a growing sense of discontent among rank-and-file Republicans over this Russia business (and I would guess the tariffs will take a toll as well.) There may not be quite as many true Trump aficionados as these clever strategists assume.

But they do have one last trick in their bag. The Washington Post reports that on Thursday House Republicans will vote on a spending bill that contains no money for election security grants to the states. They say the states have received enough money in the past to get the job done. The fact that Dan Coats says the "red light" is flashing as it was before 9/11 doesn't seem to be a matter for concern.

The GOP establishment saw what Trump did in Helsinki and was momentarily shaken. It was a stunning performance, to say the least. But it's pretty clear that after thinking it over they've decided that maybe Russian interference in the election isn't such a bad thing after all. It may be their only hope.