"The Taylor Swift of treason": Jimmy Kimmel offers a theory for why Trump keeps waffling on Putin

"Trump kept his peace going by calling out his haters today on Twitter. He's the Taylor Swift of treason" 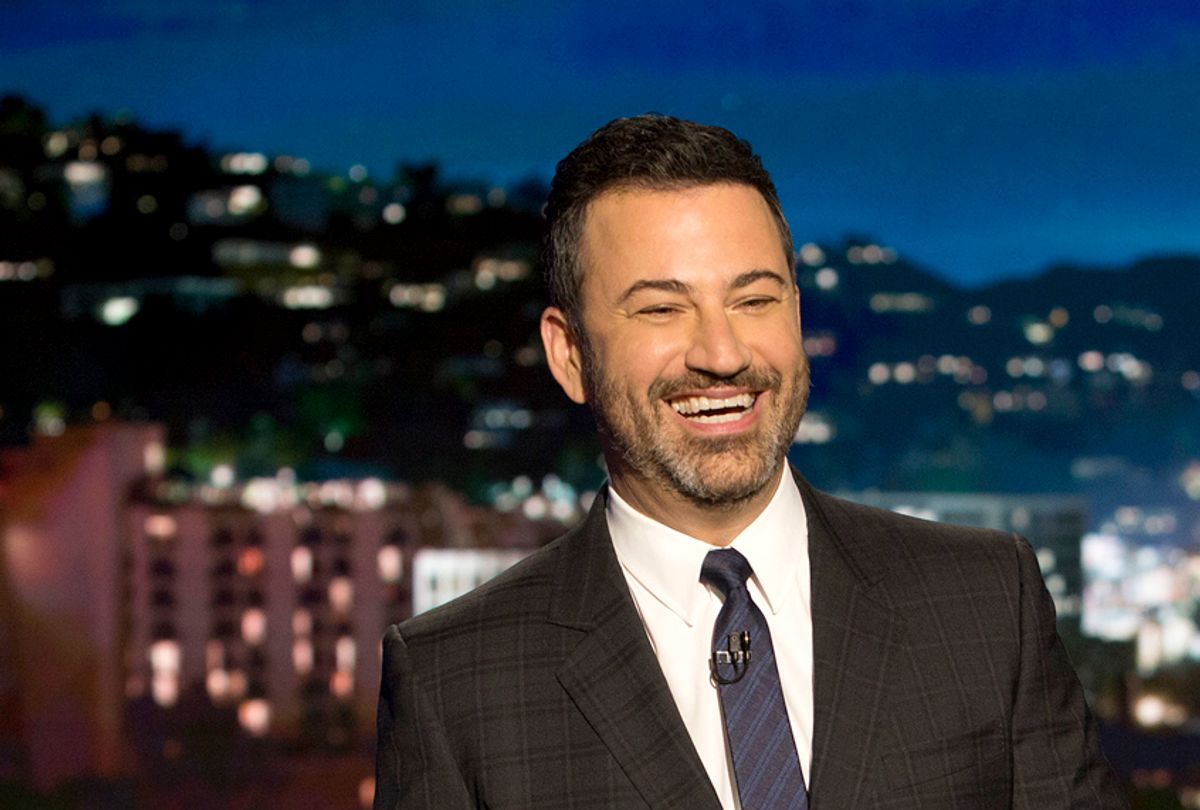 During the George W. Bush's presidency, comedians often joked about how the president's penchant for malapropisms, gaffes and other manners of faux pas made their job particularly easy. While the Donald Trump era would seem to offer a similar bounty of comedy grist, the problem is that Trump has obviously been compromised by a foreign power. In addition to putting America as a country in a difficult bind, this also makes things particularly awkward for those who are entrusted with the responsibility of finding mirth in an unprecedented and humiliating situation.

Of the late night talk show hosts tasked with that responsibility, Jimmy Kimmel and Stephen Colbert really rose to that occasion on Wednesday.

Kimmel perhaps had the best monologue, one in which he repeatedly hit on some key truths about why Trump's Republican base refuses to hold him accountable even when he clearly sells out America's best interests in order to please Putin.

"With all of this Moscow madness happening, according to a new poll from Reuters, 71 percent of Republican voters have a favorable view of how Trump has been dealing with Russia. Which is nuts!" Kimmel said. "But I was thinking about this today, and I think there's a simple explanation for it: They might not like what he's doing, they might not like him... but they love how pissed off it makes Democrats, and so they want it to keep happening."

He added, "Well, Trump kept his peace going by calling out his haters today on Twitter. He's the Taylor Swift of treason, he really is."

After reading off a tweet by Donald Trump in which he accused his critics of wanting to go to war with Russia and describing their criticisms as "Trump Derangement Syndrome," Kimmel quipped that if there is indeed a condition named after Trump, it's probably "sexually transmitted."

Kimmel also took the piss out of Trump's subsequent excuses for his pro-Putin pandering, according to The Daily Beast.

"First of all, the president meant to say that Papa John was treated unfairly, not fairly," Kimmel joked. "He mistakenly carried the ‘un’ from his meeting with Kim Jong Un, who he would like to clarify is not a great guy under that chubby exterior. Second, the president did not intend to say that Kentucky Fried Chicken is a healthy breakfast for children. And he would like to retract the name ‘junior’ from Donald Trump Jr. as it has become clear his son is kind of a douche."

Kimmel also expressed incredulity that anyone would believe Trump meant to say "wouldn't" instead of "would" during a key section of his press conference.

Like Kimmel, Stephen Colbert took aim at the people who refuse to see that Trump betrayed American interests to Russia during the Helsinki summit.

"They say that time heals all wounds... and they are wrong," Colbert joked. "Time can also fester all wounds and then you gotta start lopping off stuff before it spreads. And I'm beginning to think it's time to reach for the bone saw because anyone who still believes Donald Trump at this point is gangrene on the body politic."

He then compared his feelings while watching the press conference to his emotions upon learning that Trump had won the 2016 presidential election.

"Back then, my biggest fear was we had elected an asset of the Russian government who would sell out America at every opportunity just to save his own hide. My biggest fear now is that I was right," Colbert said.

At that point he began deconstructing Trump's claim that his entire press conference could be explained by understanding that he meant to say "wouldn't" instead of "would" at one key point during his joint appearance with Putin.

"I see no reason why you would be a traitor — I'm sorry, I mean 'wouldn't," Colbert said. Then he presented an idea to his audience:

"But in the interest of fairness, because we're nothing if not fair at 'The Late Show' — and I'm being told we're nothing — anyway, here's what it would have sounded like if he had said what he claimed he meant."

At that point, Colbert played the clip of the moment in question, replacing the word "would" with "wouldn't" at the appropriate point and demonstrating through example that Trump's sentence wouldn't have made any sense if he had in fact said "wouldn't" instead of "would."

"Okay, alright, that fixes it. Smooth. Smooth. That fixes the only word he claims he got wrong. I'm just curious, did he see anything else?" Colbert said before showing another clip of Trump praising Putin's denial of Russian interference in the American electoral process.

"That's pretty terrible, but you know what? Maybe he meant to say this."

Colbert eventually brought his monologue to a climax by observing, scathingly, that "Trump’s walk back yesterday was more of a shamble, and you’d have to be some kind of idiot to buy it."

Just to be clear: I'm not saying that the jokes made by Kimmel and Colbert were the crème de la crème of American comedy. It would be asking too much of them, or any comedian for that matter, to effectively make light of the fact that America has a literal traitor as its president. Nevertheless, what they may have lacked in uproarious humor they more than made up for in simple, honest truthfulness.

On why Putin persecutes homosexuals.