Lessons of "Generation Wealth": In an age of excess, it's women who lose 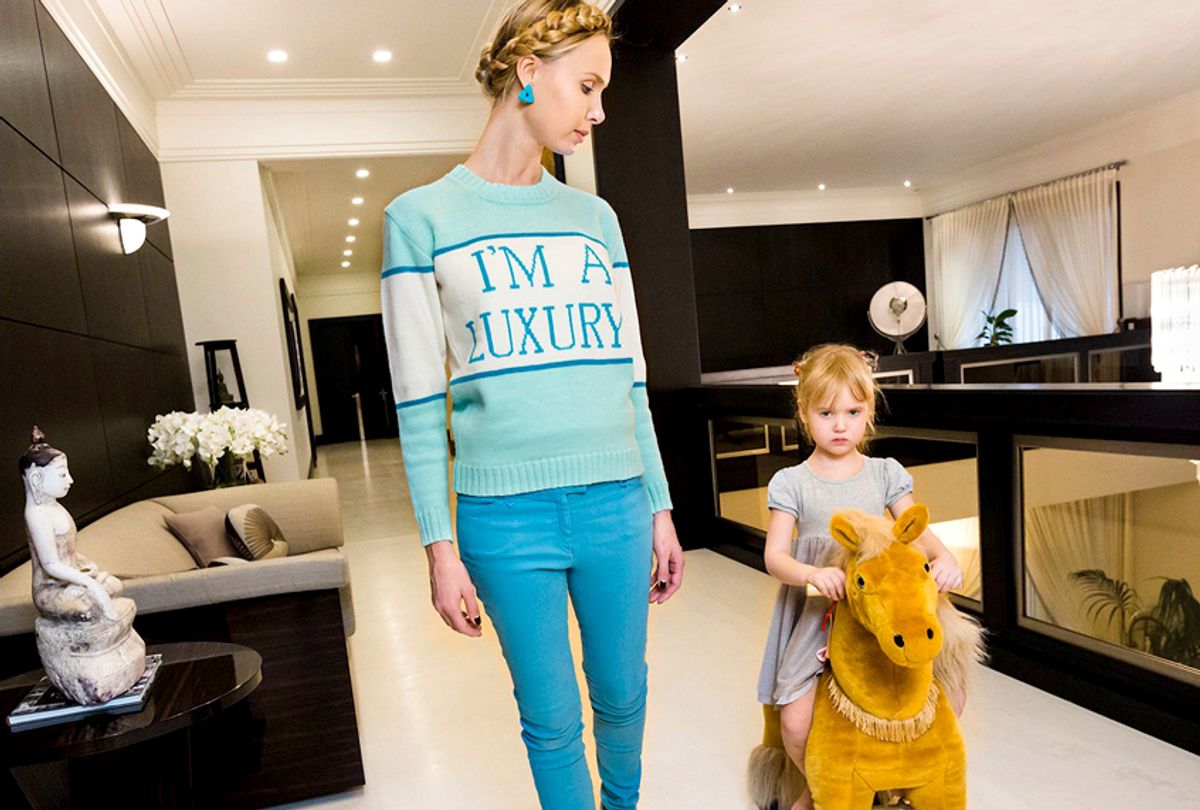 Ilona at home with her daughter, Michelle, 4, Moscow, 2012 (Courtesy of Amazon Studios/Lauren Greenfield)
--

“Dolce…,” mouths a solemn woman behind a Beijing school desk. “Dolce and Ga-baa-naa…..”

Aside the stylish tutor relaying the subtleties of vowel duration, this could be any exchange in any Italian-language classroom. But what these students are after isn’t linguistic proficiency, or even a lesson on high fashion, but rather the capacity to pronounce the names of the luxury items that will anchor their sense of self.

Welcome to “Generation Wealth,” the latest from photojournalist and filmmaker Lauren Greenfield, whose monograph and museum show of the same name chronicle 25 years of decadence: a feather-strewn pageant star struts her stuff(ing), a diamond-studded grill adorns a grin, sparkling Mary Janes crush sequins to the ground while an aerialist offers a bottle of Armand de Brignac.

And that’s just the first 60 seconds.

But for all the circusy bravado of the opening montage, this movie is neither trickle-down treat nor bacchanal guised as bromide, but rather an interrogation of an era defined by an obsession with wealth.

“I noticed that no matter what people had, they still wanted more,” says Greenfield’s contemplative voiceover early in the film. “I wondered if the hundreds of individual stories I had shot about money, fame, sex, body image, even plastic surgery for dogs, were all connected—and what they said about us.”

Given the scope of Greenfield’s oeuvre—investigating extreme eating disorders, the perils of “girl culture,” or a woman who wishes to build America’s largest single-family home—it is no surprise that the bulk of these stories are very female. While some of the men in “Generation” suffer the spoils of excess—the Beverly Hills adolescent who says “money just ruins kids,” the son of the R.E.O. Speedwagon singer for whom opiates took the place of “the hug [he] never got,” the Icelandic banker banned from his desk during the 2008 recession—the vast majority of those onscreen are female: a toddler-in-tiara spitting “money, money, money” from a bubblegum smirk, porn star Kacey Jordan faux-fellating a toy whale, Atlanta strippers sorting bags of cash at the end of a busy night. Even the lady Wall Streeter defending the Federalist Papers becomes an unwitting casualty of the system, tear-stricken as she recounts a series of failed IVF attempts and how close she was to losing her premature daughter born of a surrogate (whose body is also treated as the wealthier woman’s property).

What may surprise, and hopefully unnerve, is the extent to which so many of the women depicted in “Generation Wealth” cloak their addiction to money and excess in popular feminist rhetoric—to “take care of myself without depending on a man” or to “satisfy my own body issues for my daughter’s sake." The surrogate hired for five and half months—dubbed by her employer’s doctor as a “walking baby carrier”—explains that she took the job to move out and up from a “three bedroom, one bath” household. “Bigger is better, right?” she laughs in a room filled with baskets of children’s plush dolls and animals.

But none of this would surprise those troubled by the rise of what "We Were Feminists Once" author Andi Ziesler has called “marketplace feminism”—the belief that female choice and individual self-actualization prove the primary means of achieving equality. “Consumer empowerment dovetailed nicely with third-wave feminism . . .,” Zeisler explains, “and this empowerment was certainly of a piece with the neoliberal ideal in which individuals operate independent of culture and economic influence.”

But in a blown-out, “Lean-in” world where self-branding is the status quo, a woman’s ability to even achieve financial solvency is ever more predicated upon not only what she consumes to fulfill aesthetic expectations, but by how she herself is consumed in both the real and digital spheres. So as much as it may feel “empowering” to Instagram pics of a svelte post-baby body, or upload a luminous headshot to a LinkedIn account, danger lurks when one’s power is based less on the capacity to produce something than project an image of ineffable confidence and economic well-being. In other words, when we privilege capital—or the illusion of such—above all, a woman’s gains are measurable only insofar as her body and labor retain market value.

While Greenfield doesn’t moralize, her lens doesn’t mince: we meet Chantal, a former model, who cuts herself to “damage the property”; Kathy, whose plastic surgery makeover leaves her broke and living in her car; and Daveney (formerly Kacey Jordan), recounting how she contracted Salmonella through a 58-man bukkake. “As much work as I’ve gotten from it, it was worth it,” she says. “I wanted to do something for which I could be remembered, and it worked.” Later in the film we watch Daveney—as “Courtney,” her given name—return to her home state of Oregon and minimum-wage job after declaring bankruptcy and losing her most recent pregnancy.

In this light, “Generation Wealth” serves as a kind of cautionary tale to neoliberal feminists who deem the market the final equalizer. Greenfield may look toward “the extremes to understand the mainstream,” but what’s clear from the film is that it’s harder than ever to tell the difference. When a laughable reality television star assumes our highest public office, it’s safe to say that what used to be extreme has become frighteningly status quo. And in a world where financial empowerment has been a prominent concern of the feminist movement, it can seem impossible to escape the fallacy that wealth is the primary sign of female progress.

“Growing up in a system that measures success by money, that values consumerism and competition, that devalues compassion and community” argues Jessa Crispin in her recent polemic against the ethos of female “empowerment,” “these girls and women have already been indoctrinated into what to want . . . and what that girl wants is going to be money, power, and, possibly, her continued subjugation, because a feminism that does not provide an alternative to the system will still have the system’s values.”

Greenfield pretty much says the exact same thing, often letting leftist journalist Chris Hedges do much of the heavy lifting. “Unfettered, unregulated capitalism does what it’s designed to do,” he explains. “Commodify everything. Even human beings being commodities that you exploit until exhaustion or collapse.” What follows is a shot of Daveney shaking out a handful of pills, recounting the experience of having her “ass torn” the year prior, while she currently battles morning sickness.

And while women reap the damages and learn the tragic lessons, most of the men in the film don’t evolve at all. Take Mijanou, the 18-year-old “Major hot Latina,” as labeled by her male classmates, who originally appeared in Greenfield’s 1997 book project "Fast Forward: In the Shadow of Hollywood." Living off the grid with her daughters and gentle bearded husband, the former homecoming queen reflects at 42 that she was “pretty scarred by that time,” clearly lamenting her days “dressing sexy like the magazines say . . . toward the male gaze.” Meanwhile her high school courtiers have become middle-aged bro dawgs cat-calling from a convertible and reminiscing onscreen about her teenage “rack.”

Or take Florian Homm, the hedge-fund tycoon turned FBI Most Wanted who can never return to the U.S. lest he face extradition. For all he bemoans losing contact with his wife and kids while sequestered in the “prison of Germany,” he expresses zero regret for defrauding thousands of their money, or for paying a Dutch sex worker to take his 15-year-old son’s virginity. “It’s not a moral discussion,” he says. “Sex is of course an extension of commerce—what isn’t?”

If the number of white male talking heads—Homm, Hedges, novelist Bret Easton Ellis, and a New York psychotherapist—may seem initially ironic in a documentary with such feminist inclinations, they ultimately suggest how knowledge too remains a site of power. These men can lecture from the comforts of a soft-lit office or library, their ability to intellectualize the problems of excess a luxury in and of itself. What is critical distance, after all, if not a certain level of remove, and ergo privilege?

Greenfield’s impressive ability to play both fly-on-the-wall and trusted confidante may come from the history of relative privilege she herself enjoyed growing up—and is open about from the start. She is equally as open, if not downright self-scrutinizing, about the dark side of her own ambitions. “I'm often chasing my obsession with as much adrenaline as my subjects,” the director admits toward the end of her film.

This author uses rage to empower