Exclusive: Surprise "Fox & Friends" guest on why she ambushed hosts with attack on Trump 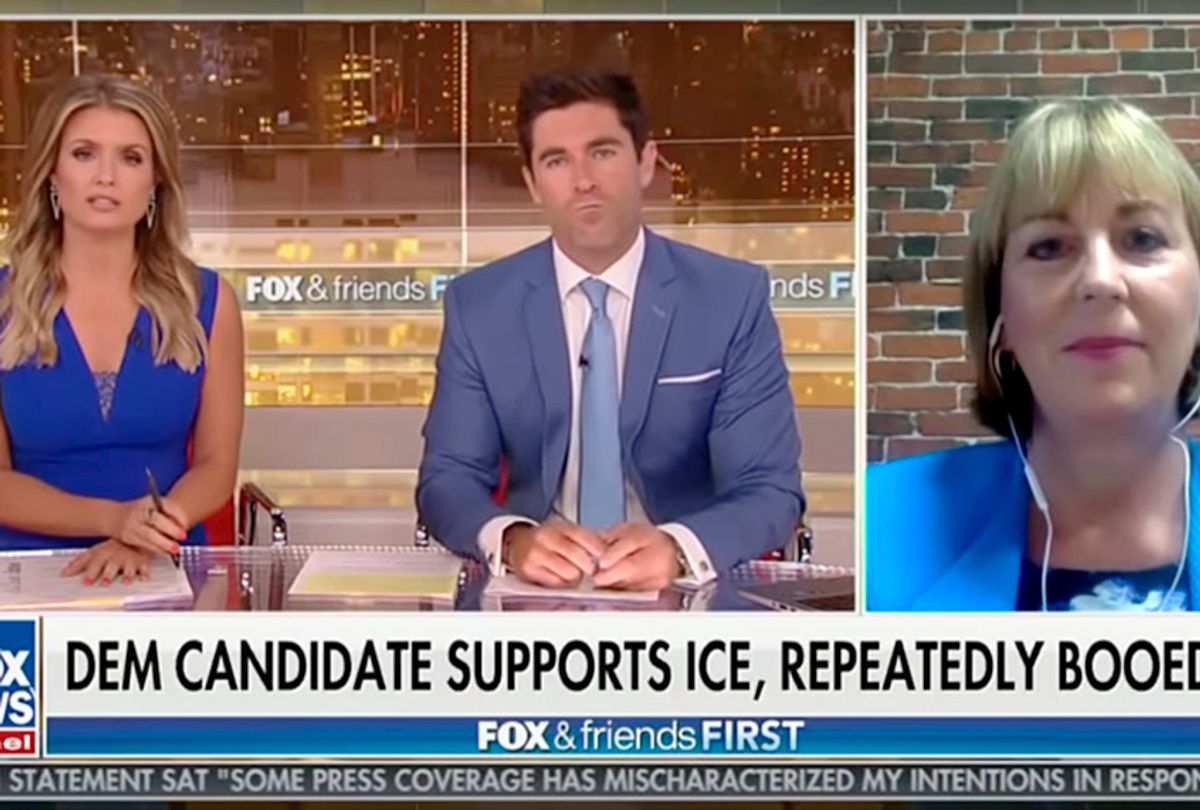 The hosts of "Fox & Friends First," an early morning program famous for its fervent support for President Donald Trump, thought they were putting a Democrat on the air who would support the president and his agenda. Instead they wound up with Barbara L'Italien, a Massachusetts state senator and congressional candidate who actually opposes Trump -- and gave the Fox News audience an earful.

"We understand that Donald Trump watches that show and we wanted to get through," L'Italien told Salon.

Early on Monday morning, L'Italien startled "Fox & Friends First" hosts Rob Schmitt and Jillian Mele when she seized her opportunity to draw attention to the plight of migrant families separated by the Trump administration at the border.

"Good morning. I’m actually here to speak directly to Donald Trump. I feel that what’s happening at the border is wrong. I’m a mother of four and I believe that separating kids from their parents is illegal and inhumane," L'Italien told her hosts.

Apparently Fox News programmers intended to host Ann Kirkpatrick, a Democratic candidate in Arizona's 2nd congressional district who made headlines recently after being booed for expressing support for U.S. Immigration and Customs Enforcement, better known as ICE. Through a series of mishaps, they got L'Italien, a state senator who is currently running for Congress in Massachusetts' 3rd district (to replace Rep. Niki Tsongas, also a Democrat, who is retiring).

"I’m actually Barbara L’Italien. I’m a state senator representing a large immigrant community. I’m running for Congress in Massachusetts," L'Italien told Fox News. "I keep thinking about what we’re putting parents through, imagining how terrifying that must be for those families, imagining how it would feel not knowing if I’d ever see my kids again. We have to stop abducting children and ripping them from their parents’ arms, and stop putting kids in cages, and stop making 3-year-olds defend themselves in court."

L'Italien explained to Salon how she got on the program and why she said what she did.

On Sunday, one of her staff members was contacted by "Fox & Friends," L'Italien told Salon. "They, I believe, were looking for Rep. Ann Kirkpatrick, who is no longer in Congress, and they had 10-year-old information because my staff member had worked for her in the past," she continued. (Kirkpatrick previously served two terms representing Arizona's 1st district and is now running for the open seat in the state's 2nd district.) "They reached out to him and we decided this was a chance to promote the concerns of people at the border as well as my constituents."

L'Italien says she was aware she might hear criticism for going on a major cable news show under what could be considered false pretenses -- and indeed some commentators on the right have expressed outrage. "Even at the risk of being criticized we decided it was the right thing to do, to get on" the show, she said.

At one point Schmitt interrupted the interview to insist that the practice of separating families has stopped, although he made the mistake of referring to L'Italien as Kirkpatrick.

"Again, my name is Barbara L’Italien," L'Italien shot back, prompting Schmitt to ask who it was they were speaking to. L'Italien's feed was cut off shortly after that while the Fox hosts, clearly rattled, decided to "move forward" and "cut to a break."

As L'Italien explained to Salon, she focused on immigration issues both because of the needs of her constituents and because of her personal story.

"My French-Canadian/Italian family came down from Quebec. My grandfather came when he was, I believe, 18 years old," L'Italien told Salon. "He came down on a motorcycle from Canada, signed up for World War I and by virtue of that became a naturalized citizen. My mom's family came from Ireland after the potato famine [of 1848], some of them through Nova Scotia as well. And they all came for the same reason — they wanted a better life for themselves and for their families."

"Right now I represent the city of Lawrence, Massachusetts, which has a large Latino population," she continued. "People there are living in fear of being rounded up and being deported. These are also people who have come in search of better life, good schools, good jobs, health care, and I just feel it's really important that we stand up and say that what's happening in terms of inaction on sensible immigration policy -- and this notion of coming after and demonizing people who don't look like us and speak other languages -- just has to stop."

Kirkpatrick, the Arizona Democrat "Fox & Friends First" hosts had planned to interview, was recently heckled on several different occasions during a congressional debate in which she expressed views supportive of Immigration and Customs Enforcement, as the National Republican Congressional Committee highlighted in a recent tweet.

On one occasion, the booing occurred because Kirkpatrick raised her hand after being asked — alongside a panel of other candidates — whether she would support ICE without any increased oversight. The second time, Kirkpatrick was booed for raising her hand to indicate that she would have supported Democratic House leadership in condemning the comments made by Rep. Maxine Waters, D-Calif. When she raised her hand for a third time, it was to answer a question about mass incarceration, although the footage does not reveal at what point she began to get booed.

After the "Fox & Friends First" broadcast, however, Kirkpatrick said on Twitter that the program had misrepresented her position:

L'Italien told Salon that after her surprise appearance on Fox News she has been met with "overwhelming support" from her constituents.

"We have seen it on social media — Twitter, Facebook, Instagram," she said. "We've had some folks call that have not been happy, but those folks have seemingly been calling from outside my state of Massachusetts. This was an opportunity to really draw a spotlight on the fact that we're engaging in a dangerous and inhumane practice by separating families at the border."

A harrowing look at how ICE ruins lives.