"Who Is America?" and "Big Brother" separately and together illuminate our racial divide

Post-racial America never existed and these two series prove it — one intentionally, and one inadvertently 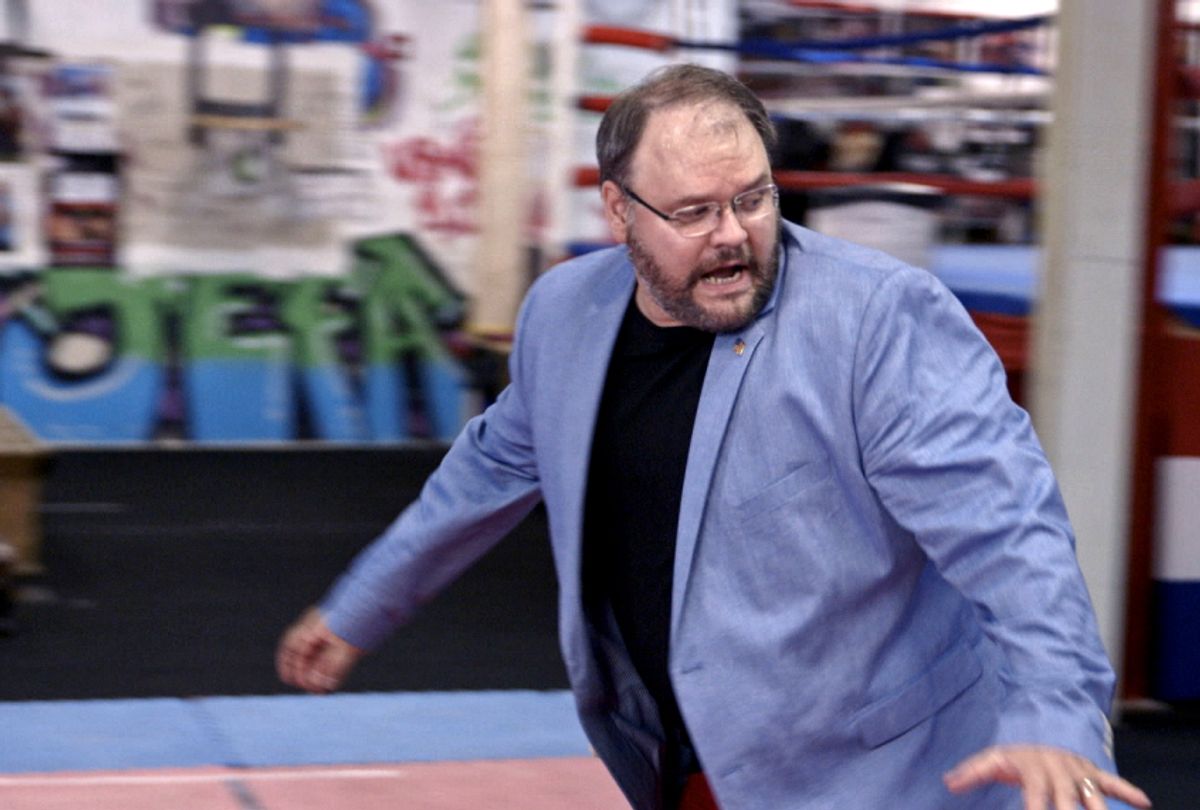 Jason Spencer in "Who Is America?" (Showtime)
--

Depending on who you are, America remains a nation where you can be caught with your pants down and still keep your job.

Sometimes this expression is metaphorical as opposed to literal. In the case of Georgia state representative Jason Spencer, both versions apply.

In Sunday's second episode of Showtime’s “Who Is America?” comedian Sacha Baron Cohen, disguised as Israeli anti-terrorism expert Capt. Erran Morad, directs the lawmaker through a number outrageously racist acts, which he performs as cameras are rolling.

This includes, but is not limited to, imitating a Chinese tourist taking an upskirt photo of a person wearing a burqa (employing racist jabber including terms such as "konichiwa," "sushi" and "Ho Chi Minh city," because it’s all China to him); screaming the N-word over and over again; and making a bare-assed backwards dash at Baron Cohen/Morad, all in the name of thwarting Islamic extremism. (Warning: the below video contains explicit images, including Spencer's naked butt.)

One would assume that following such an aggressive moonshot, Spencer’s career would be over. According to a statement he made to The Washington Post, it is: he already lost his primary election (to a 24-year-old political newcomer who has never held office before), and has five months left in his term.

There have been calls from other Georgia state lawmakers for Spencer to resign.

Thus far he has refused to do so. Why would he? Spencer has no shame, which he proved by publicly threatening the life of a black attorney advocating the removal of Confederate statues. Besides, as proven in the same episode when Baron Cohen visits Kingman, Arizona as the hyper-liberal Dr. Nira Cain-N’Degeocello, he might not need to step down. That all depends on how his constituents feel about seeing their representative lawmaker’s backside.

Oh, you were thinking the televised evidence of Spencer’s blatant racist views would be the problem? In today’s America, not so much. Remember, in our great nation, politicians resign after being caught on camera smoking crack, not necessarily showing crack.

Moving on to Kingman: there, Cain-N’Degeocello leads a small focus group of around 23 people, where he describes plans to replace a local shopping center with a $385 million mosque. He assures the locals that the construction will be funded entirely by outside groups, including the Saudi government and the Clinton Foundation.

The assembled citizens of Kingman — all white people — aren’t pleased.

“Can we hear from some of the Muslims in this room?” Cain-N’Degeocello asks, then directly addresses a perturbed-looking man whose arms are crossed. “How do you feel about it, sir? Are you Muslim?”

The man shakes his head and says, “No.”

“There are no Muslims here at all,” Baron Cohen’s character says aloud, which the producers were likely banking on. What happens next may have been more than they could have wished for, though maybe they could have predicted it.

“This town’s lucky to have black people in it!” a man in a plaid shirt pipes up from a few rows back. The room falls silent.

“Yes! Of course you’re lucky to have black people here! They add a lot to the society,” says Cain-N’Degeocello/ Baron Cohen. “Thank you, sir. Finally somebody who appreciates a multicultural society.”

The man yells as Baron Cohen keeps talking. No, the man says. “You’re not hearing me out.”

So another man closer to Baron Cohen clarifies what his neighbor means, in case the folks at home aren’t getting it: “He’s saying there’s black people in Kingman that aren’t welcome there either, but we tolerate them.”

In “Who Is America?” Baron Cohen returns to the same prank tactics he used to brilliant effect throughout “Da Ali G Show” and, as I have previously written, the fact that they still work after all these years proves how alarmingly credulous we are.

The second episode has a sharper purpose, demonstrated by Spencer and that focus group — culled via ads placed on Facebook, Craigslist, and other local sites and promising payment. It blows away any remaining dust left in the wake of exploding the post-racial society myth, an event some may date back to Donald Trump's announcement that he was running for president.

Again, it must be pointed out that Baron Cohen isn’t doing anything here that he hasn’t already accomplished in “Ali G” or by getting those frat boys wasted on a road trip in 2006’s “Borat: Cultural Learnings of America for Make Benefit Glorious Nation of Kazakhstan.” Back then those young men decried Baron Cohen's dishonest methods, claiming he tricked them into saying and doing terrible things.

However, the art of Baron Cohen works a little like wine, or truth serum. In Sacha and visibility, veritas.  His marks are only as susceptible to being duped as they allow themselves to be. Witness ABC newscaster Ted Koppel, also appearing in the second episode (perhaps having given his permission after going public with having nearly been fooled) and shutting down the taping as soon as it became obvious that mischief was afoot.

Nobody made Spencer drop his pants and display his hind ham. Just because some guy claiming to be an anti-terrorism expert promised him that he could teach him "how to use your buttocks to intimidate ISIS," he was under no obligation to expose where the good Lord split him.

And in neither Spencer’s case, nor the focus group’s, did Baron Cohen or any of his producers coerce their subjects to speak their racist views aloud. They were comfortable enough to do so on camera because they’re comfortably racist. Islamophobia and racism make a person do some wildly insane and sometimes dangerous things.

In the last year or so people have used social media to disseminate footage of ordinary citizens engaged in racist acts against other ordinary citizens, sometimes resulting in said bigots losing their jobs and community standing. But if “Who Is America?” proves nothing else, it’s that public shaming is in no way enough to effect change. There’s ample underlying support for the out-and-out discrimination advocated by Spencer and the Kingman focus group so that prejudicial policies remain cemented in place.

This is not surprising in the least or, despite Baron Cohen's designation as a comedian, in any way hilarious. Rather, the power is in having the obscenity of it placed right in our living rooms, without equivocation. “Who Is America?” leads with this, mocking it and attempting to shock the audience in a single pass. Whereas over on Showtime’s broadcast sibling CBS (both are owned by CBS Corporation), the visible racism on the summertime reality series “Big Brother,” which also airs episodes on Sundays, can be somewhat more sublimated. Or rather, the network may be hoping it is.

This week’s Sunday episode led with a disclaimer reminding audiences that “Big Brother” is a reality show “about watching a group of people who have no privacy 24/7 — and capturing every unfiltered moment and conversation in their lives.”

“At times, the houseguests reveal prejudices and exhibit behavior that we do not condone," the disclaimer reads. "Views or opinions expressed by a Houseguest are those of the individuals speaking and do not represent the views or opinions of CBS. Viewer discretion is advised.”

The disclaimer refers to an incident between Bayleigh, this season’s sole African American houseguest, and JC, a Hispanic gay man who is five feet tall. JC explains to Bayleigh that he’s merely short, and does not live with dwarfism, to which Bayleigh responds by asking what the difference is between a dwarf and a term that is blanked out but is understood to be an offensive word that starts with the letter M.

JC explains in one of the fourth wall-breaking diary room confessionals that “the proper terminology [for] someone who has dwarfism is either calling them a dwarf or, something like, a little person.  Please don’t call a short person the M-word. That’s a very derogatory term.”

Unfortunately in his explanation to Bayleigh, he said, “That’s like saying gay and like [blank]. Or [blank] and, like, black.” As in, he used the N-word.

The resulting argument is mainly over context. JC explains to Bayleigh that he doesn’t think the N-word is OK, he’s simply explaining that the slur she used to describe little people has the same power. She, meanwhile, explains that she’s triggered due to her experiences of growing up as the only black girl in a mostly white community. “I’ve never really lived a day in my skin without it being pointed out that I’m black.”

So, yes, it was a difficult moment and a teachable one. But not necessarily one requiring a “viewer discretion” warning any more than, say, many other exchanges on the series that don't make it into primetime.

“Big Brother,” regularly gives America a fly-on-the-wall view of casual racism in many forms. As Reality Blurred critic Andy Dehnart points out, in the 2013 season nearly half of the cast behaved in ways that were so demonstrably racist that CBS had to issue a statement very similar to the one used this week, assuring the audience that the views expressed by the contestants did not reflect those of CBS.

That said, the series has frequently come under fire for its racially homogeneous casting. This longstanding majority whiteness within the "Big Brother" house has resulted in a lot of easy breezy disparagement of minorities over the years. In this season alone, housemates have likened their tans to “looking ghetto.”

“I will change ethnicities,” “Big Brother” castmember Rachel has been quoted as saying. “I mean I already have basically. . . two more days in the sun I will — won’t be good.”

Yes, this is who America is. It’s not funny or pretty or moving forward as quickly as we fooled ourselves into believing it was. But the fact that we’re seeing this in its full glory on TV serves to remind us that although change may come, it isn't home just yet.

Find out more about champion squash player Maria Toorpakai, the focus of the POV documentary "The War To Be Her."