"I'm thinking about it," Holder told Stephen Colbert on Monday's broadcast of "The Late Show" on CBS 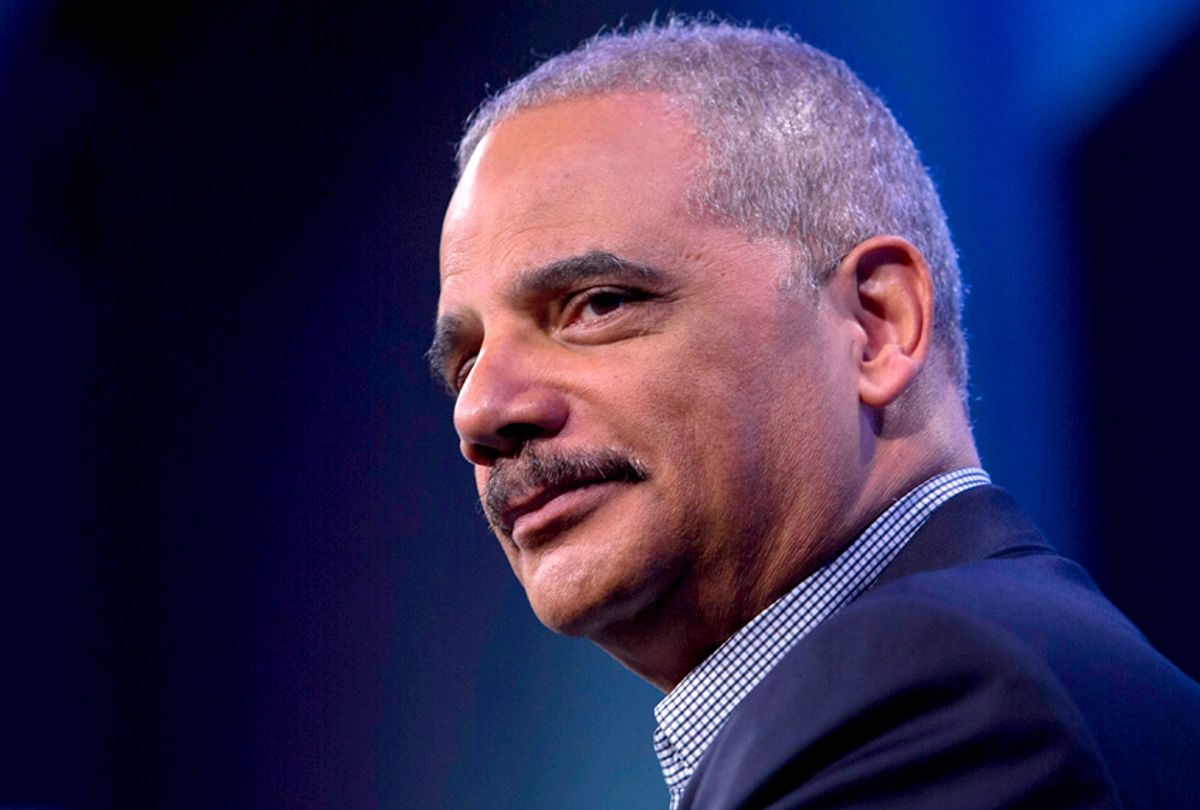 Eric Holder, who served as the U.S. attorney general under former President Barack Obama, has confirmed reports that he is considering running for president in 2020.

"I'm thinking about it," Holder told Stephen Colbert on Monday's broadcast of "The Late Show" on CBS. "What I’ve said is that I’d make a determination sometime early next year."

Holder added that he is currently dialed in to this fall's pivotal midterm elections, where control of Congress hangs in the balance.

"My focus really now is on 2018," he said, to applause from the audience. Holder added that he is committed to "trying to make sure that Democrats take back the Senate, take back the House and that we do well – importantly – at the state level."

With his disclosure, Holder became the latest name added to the long list of potential Democratic challengers to President Donald Trump in the upcoming 2020 election.

"Buzz increased around a possible Holder bid last month when he spoke at a 'Politics and Eggs' breakfast in New Hampshire that is considered a rite of passage for potential presidential candidates," according to The Washington Post. "Holder, who served during the Obama administration, told that audience that he was considering a bid for the Democratic nomination, but devoted most of his prepared remarks to his current work challenging congressional districts that have been gerrymandered to favor Republicans."

In addition to Holder's political aspirations, Colbert was eager to ask the former attorney general to clarify his most recent tweet, which was posted after Donald Trump and Vladimir Putin's historic summit in Helsinki, Finland, on July 16.

Holder wrote on Twitter: "The Trump Presidency will thankfully end, the damage repaired. The United States must then reassume its role as world leader. What we witnessed today was shameful-siding with Putin and not our Intell community/FBI. Then also blaming America. Unbelievable. Collusion in plain sight".

Colbert asked Holder what he meant in regards to the demonstrative collusion he witnessed from the pair's press conference.

"Well, when you have a press conference with the whole world watching, and you have 'Vlad the Terrible' next to you and you are saying that, in essence — not in essence," Holder corrected himself, "you're saying that, 'I am siding with this guy — the bad guy' as opposed to the unanimous opinions, decisions, analysis of the intelligence community of the United States — the nation that you're supposed to lead — you're putting arms around this person and giving the intelligence community the Heisman."

Holder added that, although the display itself was not criminal, "it is certainly collusion."

Colbert and Holder also discussed the difference in dynamic between the White House and the Justice Department when Obama was president in comparison to Trump.

"Any attorney general has got to have the guts to say no to the president," Holder said, adding that is one lesson that Attorney General Jeff Sessions still needs to learn.

Holder told Colbert that Obama recognized and respected the independence of the Justice Department from the White House.

"He respected the fact that I was the attorney general of the United States," he continued, saying he would have absolutely left his post if Obama belittled him in press conferences and on social media in the same way that Trump does to Sessions.

"When you take these jobs, you have to protect the institution that you are responsible for leading, and that, ultimately, is more important than job retention," Holder said.

You can watch the full interview below:

Could she be our next celebrity president?