A decades-long tradition is born of unacknowledged necessity, and the food they share is countertop pork tacos 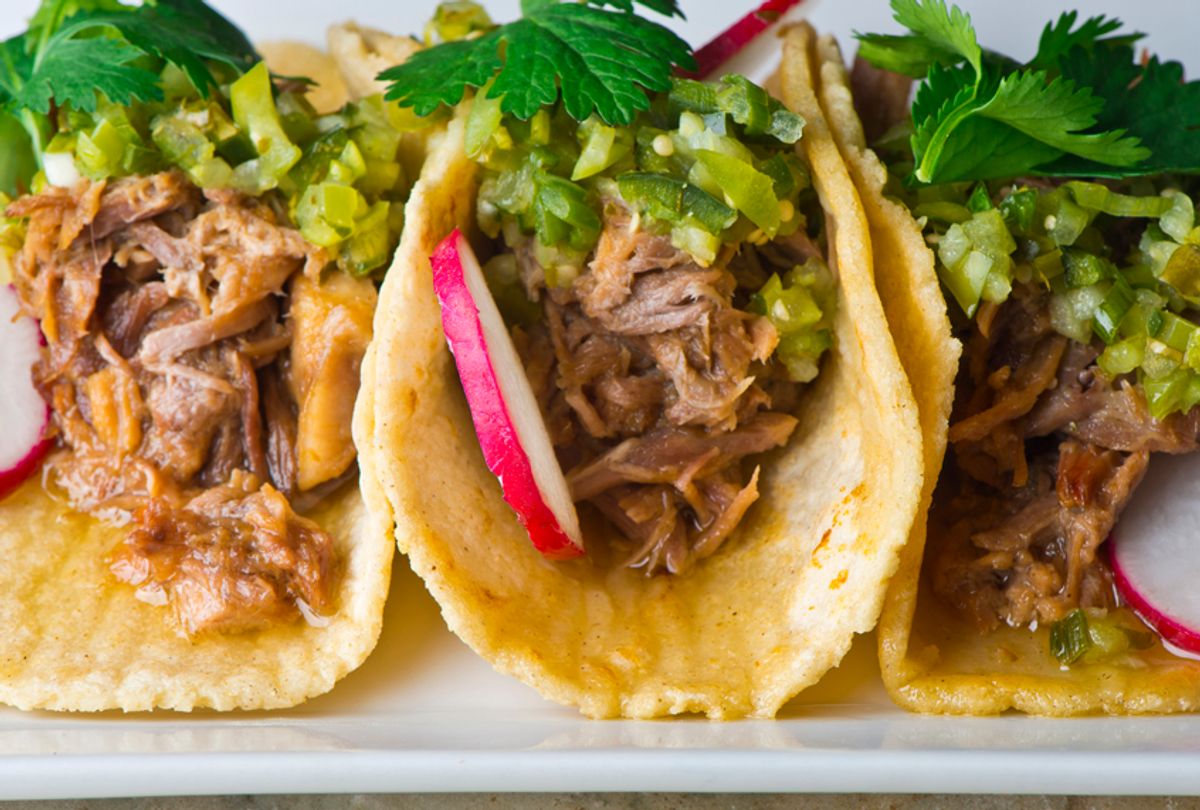 Even the most earnest efforts at faithfully recreating this cornerstone of Mexican cuisine — some argue culture — is doomed from the start. After all, in their country of origin, tacos are the object of pilgrimage. Venues like Copacabana in the Villa Coapa neighborhood of Mexico City as well as El Tizoncito and Los Picudos inspire real devotion, not simply big fans. The deceptively straightforward hand pie known as the taco is so pregnant with identity, so bursting with purpose, that claiming mastery from here is folly. I am willing to claim honest approximation though, and the one claim I’ll make for this undertaking is that it was born of a devotion to the cause of an improbably fierce table fellowship known as Boys' Night In.

Boys' Night In started as an adaptation to fatherhood. It marked the end of an era when a good time was defined by where you went and who you met. It was a concession to a life moderated by the practical, the recognition that my calendar was no longer dominated by new locations (usually restaurants) and people to meet. I’m not sure I missed the night life all that much, but I did miss my boys.

So I conspired to gather them all around one table, our table, at home. The idea didn’t go over all that well; after all, it wasn’t a dinner party, it was a stag do. When I floated the idea, most of my guests greeted me with curiosity before enthusiasm. The whole no-girls-allowed thing felt like unnecessary tumult. Leaving the house solo to go to dinner at a restaurant wouldn’t draw as much attention as winding up at someone else’s house, the reasoning went, especially since there was no sporting event associated with the occasion. Why not do this the easy way? I was asked.

In truth, I hadn’t given this dilemma any thought, but that’s because I had scheduled the first dinner — and every subsequent one —  for a Friday evening when my wife, Lisa, was traveling for business.

Maybe sell Boys' Night In as a hopeless drum circle, a moment set aside for men to share their experiences of fatherhood, their dreams and frustrations, aspirations and fears. That ought to do it. Surely no woman in her right mind would want a part of that nonsense. Meanwhile we could get on with the serious business of eating and drinking.

The menu for that first evening was ambitious and expensive, prime cuts, unimaginative wine and top shelf booze. I don’t think anybody carried cigars, but that was definitely the vibe. Little did we know.

As we settled in the requisite conversational jockeying that is a part of most unconscious gatherings, could be heard above the enthusiastic roar: “Try this.” “Oh, you haven’t heard of that?” but that nonsense was short-lived. It became pretty clear very quickly that this was an opportunity, that the men around the table could be a resource, not for careerist purposes, but for proper pursuits. A calm settled around us like an incantation, the drinking came off the gallop and the questions started coming and so did some honest attempts at answers. We lingered over empty plates and the stories that we told were sobs.

At midnight all eleven of us moved to the front porch with the end of the evening in mind, and then we lingered there, too. A bond had been made and nobody, it seemed, wanted to break the spell.

That was more than a decade and nearly as many dinners ago, the menu has gotten more modest, as have the guests, and the conversation now has a context and the resulting compassion. Not all of us had kids at that first dinner, but now we do. Of all the meals we’ve shared, the most successful has been the pork tacos. Maybe there’s something about assembling your meal together at the table through the course of dinner that makes the fellowship more complete. Perhaps it is the uninterrupted act of passing the garnishes and salsas, the embodiment of generosity, that makes the meal such a success. Who knows?

I’d like to say that this auspicious and socially potent main course is a recipe modeled after that most notable taco style, carnitas; the dish that is credited with anchoring the celebratory feast held in Coyoacán (in the modern state of Michoacán) when, in 1521, Hernán Cortes and his conquistadors sacked the Aztec city state Tlatelolco, bringing an end of that empire. Even claiming the prized buried piglet of the Yucatan, Cochinita Pibil, would lend the meal some historical gravity. But, like so many taco varieties, it was created from whole cloth.

I suppose the Boys’ Night In taco hews most closely to the ubiquitous stewed taco variety found in all 31 states in Mexico. But even that is a generosity this taco does not deserve. I just made this up, and I can’t honestly say that the preparation in the recipe below is adhered to everytime I approach the task. What I can say is that the recipes for the four salsas usually accompanying the pork have been sourced from the informative, entertaining and generally fantastic guide, “Tacopedia” by Déborah Holtz and Juan Carlos Mena.

I will stop short of calling what I do appropriation, but only because what is clear from “Tacopedia” is that taco fabrication is a craft rich in history and tradition, but it is also a living art and change is common to all its forms. For instance a key ingredient in the most hallowed variety, carnitas, is cola — employed to lend the rich color in so many, but not all modern carnitas recipes, and there’s no way that the conquistadors were packing soda as they rampaged West from the beaches of Cancún, to Michoacán. By luck the spice mix I use, commercial Chinese Five spice (often star anise, cloves, cinnamon, Sichuan pepper and fennel seeds) has cinnamon, cloves and anise in common with the “Tacopedia” recipe for Cochinita Pibil. But again, that’s just luck and a somewhat informed palate.

The most important tools for this meal are a countertop slow cooker and a wand-like hand blender. I don’t have a preference when it comes to slow cookers, but it is important that the one you use can accommodate a six to nine lb. pork shoulder, often called a picnic roast, this is a rectangular cut that contains a fraction of the shoulder blade, so I recommend a seven quart slow cooker with an oval pot.

If you are not serving 11 grown men, you can opt for a more reasonably proportioned Boston butt which comes from higher on the hog, above the shoulder blade, and still has lots of delicious marbled fat. Most can inhabit one of those 4.5 quart cookers quite comfortably.

I use the hand blender — usually in conjunction with a one quart plastic take-out container — to blend the salsas, especially the ones that call for dry chiles, I find it easiest to pour boiling water over the ingredients to brew a tea and then drain all but about a quarter of a cup away and pulverize the mixture using the hand blender.

3 Tbl. cooking oil (grape seed oil preferred for high smoke point, but nearly anything but olive oil will do)