German-American history, largely erased, has lessons for our anti-immigrant era

Germans are the largest ancestry group in the U.S., but their identity has been largely disappeared. Here’s why 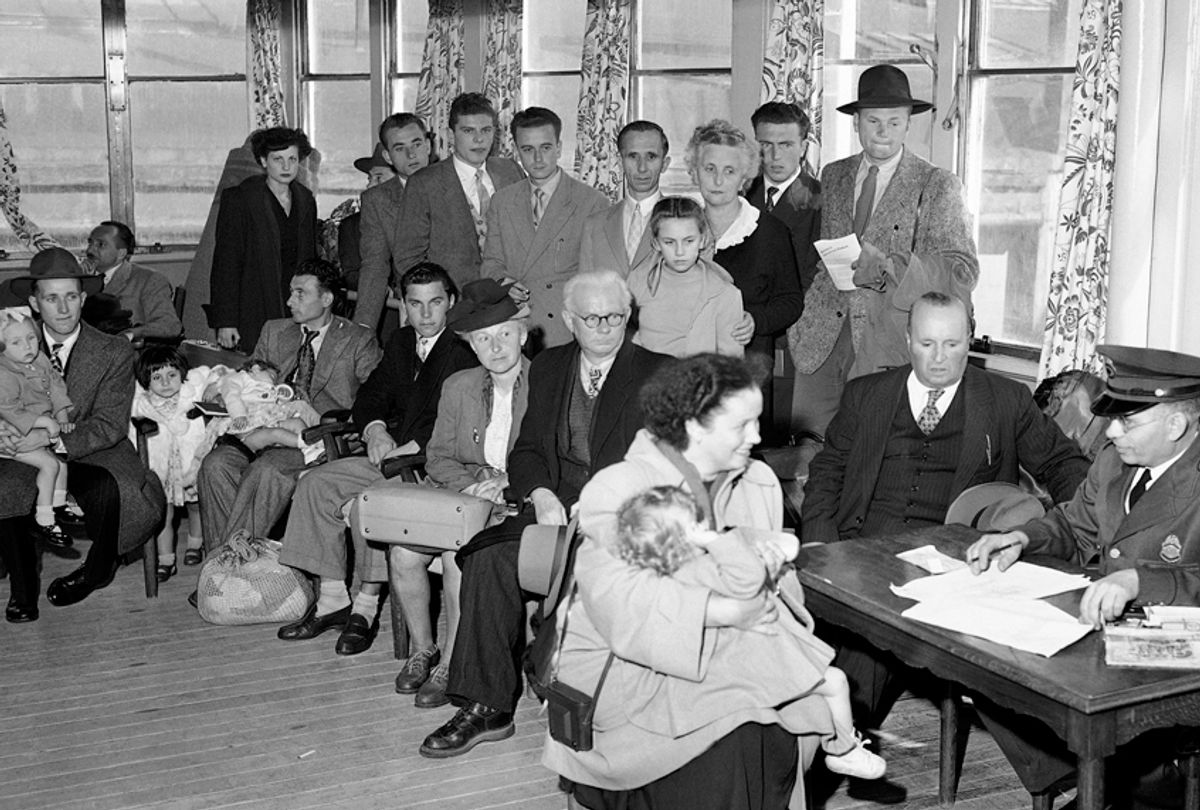 German immigrants are questioned by immigration officers aboard the liner Saturnia on arrival in New York City. They were ordered to Ellis Island for further questioning under the 1950 Security Act. (AP/John Lindsay)
--

“The howl of the cave man.” This is how a 1918 Los Angeles Times article described the music of Brahms and Bach. A year earlier the U.S. had declared war against Germany and waded into the tragedy of the First World War. The propaganda machine was in full swing. Germans were brutes—close cousins of the barbaric Huns—and detesting all things German became a badge of patriotic pride. The time was also ripe for the contributions of German-Americans to be scrubbed from the history books. Figures like Alexander von Humboldt, Carl Blümner and Heinrich Balduin Möllhausen, whose contributions to the U.S. are vast, were eclipsed by caricatures of the brutish German lusting for American blood. German-Americans learned to keep a low profile and the collective demonization induced a historical amnesia from which we have yet to awaken.

Today, German-Americans are the largest ancestry group in the U.S., with some 50 million citizens, but their history and their identity has been largely disappeared. This may seem irrelevant, but the history of how it happened tells us a great deal about our present and how ethnic groups can come in and out of favor depending on the geopolitics of the day. As Art Silverman and Robert Siegel noted in an “All Things Considered” segment titled “During World War, the US Propaganda Erased German Culture”: “today … what happened a century ago has special relevance … World War I inspired an outbreak of nativism and xenophobia that targeted German immigrants, Americans of German descent, and even the German language.”

I grew up in Germany and was educated in the post-World War II model, which, for obvious reasons, stressed a respect for pluralism and cultivated a global view of politics and culture. As a result I’ve always been sensitive to the ways in which propaganda shapes our opinions of different communities. The daily scandals of how Latin American immigrants, many of them fleeing horrors that the U.S. had a hand in producing, are brutalized at our borders; and the harassment and attacks on Muslims come out of and occur alongside a propaganda campaign to dehumanize these groups as criminal, devious and irrational. The ethnicities change, but the message stays the same.

Unfortunately, this model has proven reliable in the effort to tar an entire population, and I’ve spent a good deal of time studying how it was applied to Germans and German-Americans. It begins with a well-crafted propaganda campaign initiated only days after the U.S. declared war on Germany. On April 13, 1917, President Wilson formed the Committee on Public Information (CPI), which recruited 150,000 academics, business people, and talent from the media and arts to promote the war to voters. Up to 20,000 newspaper pieces per week were printed based on “voluntary censorship” and CPI handouts. That was probably the birth of “embedded.” One of the CPI’s primary goals was to shape public opinion of the new enemies—Germans. Professor Vernon Kellogg, a member of the intelligentsia, who served this effort, eloquently expressed himself in a CPI publication, writing, “Will it be any wonder, if, after the war, the people of the world, when they recognize any human being as German, will shrink aside so that they may not touch him as he passes, or stoop for stones to drive him from his path?”

Hollywood did its part by producing films like “The Kaiser: The Beast of Berlin and Wolves of Kultur,” which cemented the idea of Germans as a public menace in the minds of movie-goers. Super-patriotic volunteer groups joined in, whipping up a tidal wave of war hysteria, hunting for imaginary spies or saboteurs who did not exist, trampling civil rights along the way. Books were burned, citizens were tarred and feathered, German names of places, streets, foods, and objects were erased. Bach went from being a seminal composer to a villain whose work exemplified the monstrous German aesthetic. Teaching the German language was outlawed in more than a dozen states.

In that same year an anti-German mob demanded that the Pabst Theater in Milwaukee (once called the “German Athens”) cancel a scheduled performance of “William Tell” by Friedrich Schiller. They underscored their demand by placing a machine gun in front of the theater. When the theater offered to show a comedy instead the crowd threatened to “break up the Hun show.” The mob got its way and nothing showed on the night “William Tell” was due to run.

It is interesting to note that Schiller drew his inspiration from the American and French Revolution. “William Tell” was the same play W.E.B. Du Bois read in German at Fiske University before he studied in Berlin where his “first awakening to social reform began.”

On April 5, 1918, almost exactly a year after Wilson inaugurated the CPI, Robert Prager, a German miner living in Illinois, was lynched. Not only had he committed the sin of being a German immigrant, but he was suspected of being a socialist. Ironically, one of the reasons Prager’s application for membership in the United Mine Workers Union was declined was precisely because he was German. Eleven men were arrested, tried, and ultimately acquitted of the crime. On April 11, 1918, The Washington Post editorialized, “The more one ponders Senator Overman’s estimate of 400,000 German spies the harder it is to grow righteously indignant over the Illinois lynching.” Lee Slater Overman was a senator from North Carolina who chaired a committee zealously dedicated to routing out real or perceived spying and other treasonous activities on the part of Germans and others.

If the propaganda served the war effort, it also served the economic interests of the elite. Not unlike today, discontent among workers was profound. It ran so deep that the United States Commission on Industrial Relations, an arm of Congress, admitted: “The workers of the nation, through compulsory and oppressive methods, legal and illegal, are denied the full product of their toil … Citizens numbering millions smart under a sense of injustice and oppression. The extent and depth of industrial unrest can hardly be exaggerated.”

When miners in Bisbee, Arizona, went on strike in June 1917 Walter Dodge, president of Phelps Dodge Corporation, a mining company impacted by the strike, declared, “I believe the government will be able to show that there is German influence behind this movement.”

In a stroke of propagandistic genius cartoonist H.T. Webster managed to conflate the Kaiser, the top German aristocrat, with the International Workers of the World. His cartoon, which ran in the New York Globe in 1917, shows the acronym IWW printed over the Kaiser’s face.

By the time the war was over ordinary German-Americans had learned to lay low, speak English exclusively, and release any attachment to their cultural heritage. Perhaps the best measure of the success of the propaganda effort against Germans is how quickly and effectively they learned to de-identify as German. We may be tempted to mistake this for assimilation, but history shows the hand of coercion was placed firmly around the German-American community.

So, why care about this? After all, it’s not as if any American is being attacked or oppressed today based on their German heritage. For me, as a German-American and a student of history, the anti-German propaganda effort is no mere historical footnote or anomalous descent into xenophobia. It is a template—hardly the first, but a vivid one no less—for what we are seeing today. When I look at the faces of immigrant children forcibly separated from their families or hear anti-Muslim sentiment, I know that the demonization of communities does not happen accidentally and that an intellectual as well as legal and political infrastructure is required for them to become victims in the larger game of geopolitics. The material loss for those affected is incalculable and the loss of culture heritage for them and everyone else is often a quiet casualty of the war waged against them. History gives us the vantage point to see how and why enemies are created. It also gives us an unmistakable warning that we would be wise to heed.

Erika Schelby is the author of Looking for Humboldt & Searching for German Footprints in New Mexico and Beyond.

Erika Schelby is the author of “Looking for Humboldt and Searching for German Footprints in New Mexico and Beyond” (Lava Gate Press, 2019) and “Liberating the Future from the Past? Liberating the Past from the Future?” (Lava Gate Press, 2013), which was shortlisted by the Berlin-based cultural magazine Lettre International. Schelby lives in New Mexico.