Kate Bush at 60: An exquisite pop genius whose influence endures

As the UK icon celebrates a milestone birthday, a look back at her music and legacy 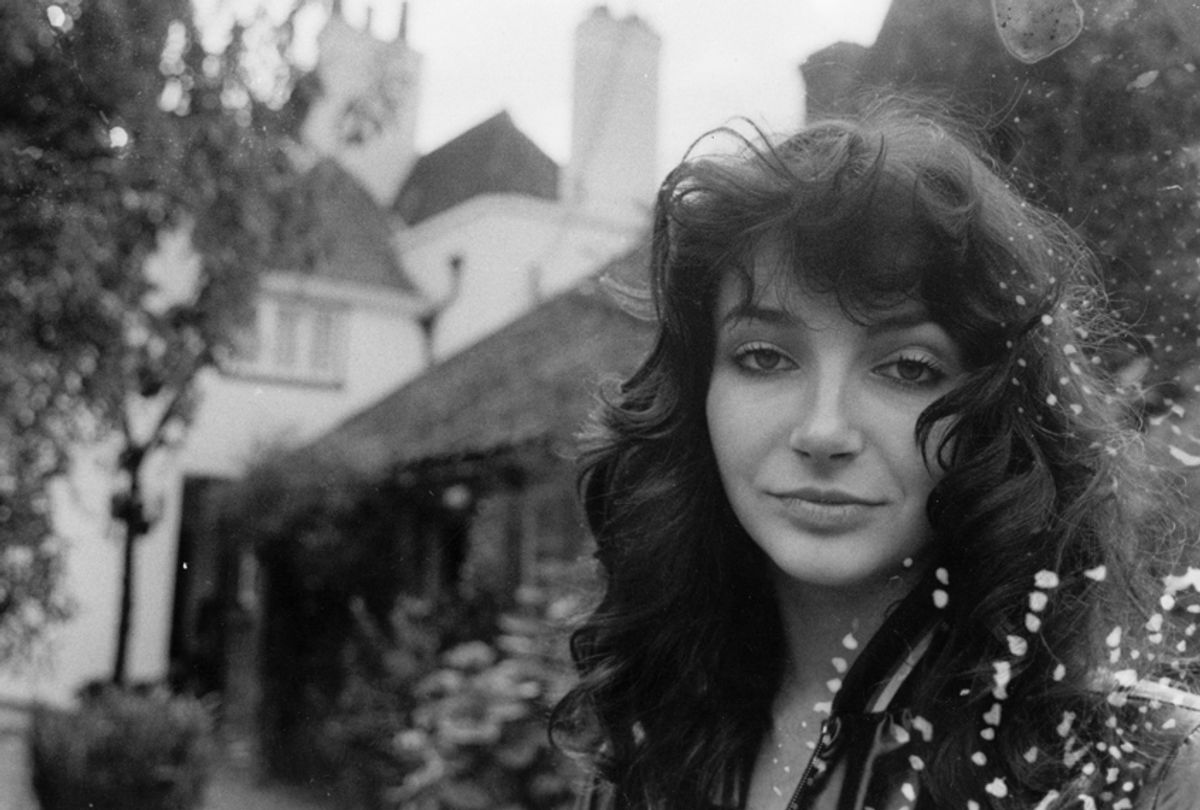 It's a vast understatement to say Kate Bush's 2014 concerts at the Hammersmith Apollo were a big deal. After all, the visually stunning, meticulously wrought 22-show run represented her first full-length concerts since 1979 and boasted a setlist covering both her pop high water mark (1985's "Hounds of Love") and more ambitious recent compositions (2005's "Aerial").

Naturally, Bush was "terrified" of returning to the stage, she told BBC 6 Music in 2016. "The idea of putting the show together was something that I found really interesting and really exciting . . . but to actually step into it was something that I had to really work hard on because I was terrified of doing live work as a performer again."

Fear isn't something usually associated with Bush, who celebrates her 60th birthday on July 30. In fact, fearlessness is a hallmark of her career, which kicked off in 1978 with a stunning debut single, "Wuthering Heights," featuring a daring, spunky protagonist based on the titular Emily Brontë novel — "I wrote the song from Cathy's standpoint," Bush once said. "Cathy wants to take Heathcliff's soul so that they can be together in the spiritual world" — the song glitters with spiraling piano pirouettes and Bush's antique-lace trills.

READ MORE: "It's a stoner record for non-stoners": Kim Gordon and Bill Nace break down Body/Head's "The Switch"

"Wuthering Heights" spent four weeks at No. 1 in the U.K. and made Bush a sensation. Her first two albums, 1978's "The Kick Inside" and "Lionheart," meld prog rock flourishes — intricate compositions, flashy orchestral flourishes and stormy electric guitars — with Victorian-era grandeur. The latter album's "Coffee Homeground" is quirky chamber-pop with Broadway bravado, while "Hammer Horror" is a marvel of extremes: Bush floats between fluttering vocals and fierce growls like a musical Jekyll and Hyde.

Thematically, those early records are ambitious and position Bush as a dazzling lyricist and literary enthusiast fond of striking imagery ("The candle burning over your shoulder is throwing shadows from your saxophone, a surly lady in tremor") and smart allusions. These albums also reflect supernatural poise as well as a crystal-clear artistic direction that she refined as her career progressed. Starting with 1980's "Never For Ever," which incorporated cutting-edge technology such as the Fairlight CMI, Bush took over production of her albums.

This gesture was powerful — it signaled Bush coming into her own as an artist, grasping the reins of her creative vision with a firm grip — and successful: Not only was "Never For Ever" her first U.K. No. 1 album, but she also became the first British female solo act to reach that peak. For Bush, having this freedom buoyed her muse, which led to 1982's "The Dreaming," the gothic cabaret-rock LP that ranks among her most intriguing work, thanks to its spiderweb-spinning vocal and musical acrobatics, although it wasn't as commercially successful as previous albums.

Still, Bush rebounded in a big way and entered her imperial phase with the luxurious "Hounds of Love." An '80s pop landmark with gauzy synthesizer drapes and soft-glow rhythms, it's a thematic gem. Specifically, the LP's second half comprises a seven-song suite called "The Ninth Wave" that's like a Grimms' fairy tale come to life — between "Waking the Witch" and its animated spoken dialogue with distressed music, the Irish-influenced "Jig of Life" and its Uilleann pipes and bouzouki.

Going by the strictest definition of the term, Bush is a one-hit wonder in the U.S.: Only the "Hounds of Love" single "Running Up That Hill (A Deal With God)," which peaked at No. 30 in 1985, graced the Top 40. (A year later, her collaboration with Peter Gabriel, "Don't Give Up," from his own smash album "So," also charted on the Hot 100.) However, the rise of alternative radio in the late '80s and early '90s boosted her American presence as she had four top 10 hits at the format, including the 1989 No. 1 "Love and Anger," which helped that year's "The Sensual World" ship gold.

Many fans ask why Bush isn't bigger in the U.S., simply because her albums deserve to be heard by a wider audience. However, her influence has permeated modern music for decades. In the '90s, Tori Amos was inundated with Bush comparisons; when Joanna Newsom and Amanda Palmer emerged in the '00s, they received the same treatment. These connections tended to be facile and based on surface musical attributes; however, Bush's career blueprint — encompassing the way she steered her own musical ship, for example, or the crisp, ornate details underscoring every song — has inspired countless other iconoclasts.

This fluidity came into focus thanks to the '00s indie scene, which spawned a surprising number of Bush covers, including the Futureheads' yelping take on "Hounds of Love," Ra Ra Riot's delicate "Suspended in Gaffa" and Wild Nothing's moody version of "Cloudbusting." Today, her spiritual descendants are even more popular; Florence and the Machine, Years & Years, and Christine and the Queens all bear Bush's imprint.

Speaking to The Fader in 2016 about developing her style, Bush said, "It's a bit like how you develop a certain style as a pianist: It's just something that gradually evolves. The more you work, the more a certain type of character evolves. It was very much a phase that went with when I was working in dance. I wonder if, as I was exploring a technique of dance, I was also sort of exploring a technique with my vocals as well."

The specter of movement informs every aspect of her music, especially the vocals — as heard on the loosey-goosey, elastic-like singing breakdown at the denouement of 1993's hit alternative single, "Rubberband Girl" or the enunciation driving the piercing rock gem "Heads We're Dancing." Even Bush's ballads don't sound lugubrious: Unfettered by sonic gravity or pop conventions, she exudes exquisite grace as she unburdens herself.

Listening back to Bush's catalog today, its slow-blossoming elegance stands out. Unlike many artists, she never felt drawn to drastic reinvention; each record builds on the one before it, adding new instruments and sound sources or unraveling experimental ideas as if she's picking at a sweater snag. Classical and theatrical, without being fussy or formal, Bush is a model of singular creative genius.

Appropriately, she commemorated her return to the stage with a 2016 live album, "Before The Dawn." But despite all the work that went into the visual aspect and presentation of these 2014 shows, Bush didn't release a DVD of the proceedings. Considering that the shows had a no-phone policy, this meant that only concert attendees glimpsed the full artistic presentation, making these shows feel like a vivid lucid dream.

“People are surprised that there’s no DVD of the show,” Bush told The Independent in 2016, “but I’d like to mention this live album that Elton John put out, '17-11-70,' which was something that I loved so much. To have an album where you could imagine what the show was, I found that incredibly exciting, and in a way, this live album is almost more representative of what it was like to be at the live show."

The idea that Bush paints her music and art using broad strokes embodies what makes her legacy so enduring. Her songs offer personal empowerment and are a salve for dark times, or provide a whimsical, escapist fantasy, but leave space for listeners to fill in their own details — and derive emotional solace.