They’re not telling the full story. 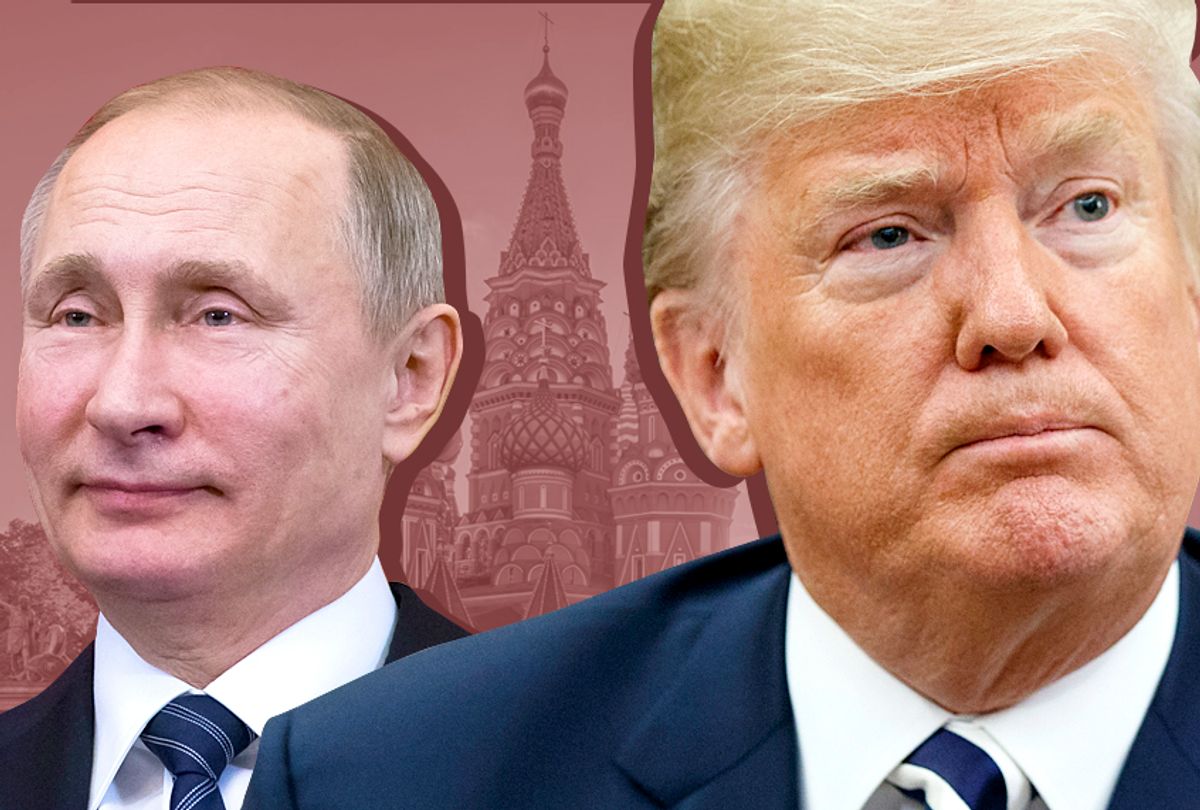 Following President Donald Trump’s disastrous bilateral meeting with Russian President Vladimir Putin in Helsinki, Finland, the president’s administration flacks and conservative media lackeys quickly scrambled to his defense, arguing that Trump has been “tough” in his “actions against Russia” and rattling off a series of actions he has taken since 2017 that supposedly support such a claim. The president himself and administration officials have also parroted the talking points in an attempt to dispel the idea that he is somehow in the pocket of the Russian government. But a closer look at the actions Trump shills have pointed to reveals a foreign policy that is more concerned with posturing for media than being “tough” in the face of Russian aggression.

On July 16, Trump met with Putin for a meeting behind closed doors in which no other American -- except an interpreter -- was present, and they emerged more than two hours later to give a wide-ranging press conference. When asked whether he holds the Russian government accountable for its multifaceted interference campaign during the 2016 elections, Trump repeatedly denied Russia’s involvement, saying, “I don’t see any reason why it would be” Russia. (The president would later claim to have gotten “would” and “wouldn’t” confused.)

To counter the deluge of negative press in the wake of the meeting, right-wing media and administration officials pointed to various foreign policy and military responses to Russian aggression that the United States and its allies have undertaken during Trump’s presidency to argue that the president’s “actions” actually “have been tough.” About a week after the bilateral meeting, Secretary of State Mike Pompeo echoed Trump’s conservative media defenders as he faced senators on the Senate Foreign Relations Committee, insisting Trump “has taken a truckload of punitive actions against Moscow” and that he has been “tough on Russia” as president. White House press secretary Sarah Huckabee Sanders repeated the meme, as did the president himself.

Trump’s defenders have pointed to sanctions against Russia that were imposed under Trump, the American strikes against the Russian-backed Syrian regime in 2017 and 2018, the March 28 expulsion of Russian diplomats and seizure of a Russian consulate, Trump’s demands for other countries to increase their NATO spending, the sale of lethal arms to Ukraine to fend off the Russian military and rebels in the eastern portions of the country, and the pressure Trump put on German Chancellor Angela Merkel over a proposed natural gas pipeline from Russia, among other specific actions. But Trump’s defenders are not telling the full story behind these actions.

In the aftermath of Trump’s meeting with Putin, a number of the president’s defenders touted sanctions that were imposed against Russia as evidence of Trump’s clear-eyed approach with regard to Russia. But, not only were the sanctions drawn up and passed by Congress while the Trump administration loudly opposed the move, the administration also dragged its feet in implementing them, missing a deadline to begin the implementation and only taking action after Congress demanded it do so. Moreover, Trump left United Nations Ambassador Nikki Haley out to dry by walking back, without explanation, an announcement she made regarding additional sanctions against Russia.

Additionally, one of the first official actions the Trump administration attempted was “to relax or remove punitive measures imposed by President Obama in retaliation for Russia’s intervention in Ukraine and meddling in the 2016 election.” The effort to remove sanctions that were already on the books appeared to continue into Trump’s presidency, as one of his top fundraisers and former deputy finance chairman for the Republican National Committee, Elliott Broidy, reportedly offered in 2017 to “help a Moscow-based lawyer get Russian companies removed from a U.S. sanctions list.”

Right-wing media have also cited U.S. airstrikes conducted against the Syrian regime as evidence that Trump has stood up to Russian aggression. But, in 2017, Trump “notified Russia in advance of” the strike, “giving time for both Russian and Syrian forces to avoid casualties in an attack,” and by the very next day, Syrian warplanes were using the airfield that was targeted. Additionally, in 2018, the strikes Trump authorized against the Syrian regime targeted chemical weapons infrastructure, “and not the bases where the Russians and Iranians are.”

Trump’s defenders have also pointed to an American counterattack on Russian mercenaries and Syrian military personnel in February, saying Trump “authorized” the attack. While the U.S. military did in fact fend offa Russian-backed attack after “repeatedly” warning about the “growing mass of troops,” the strike was an “act of self-defense.” Citing the incident as evidence that Trump is countering Russian interests in Syria does not address the larger picture that, under Trump, Russia has become even more entrenched, further solidifying its support for Syrian President Bashar al-Assad's regime, as Trump lacks a coherent overarching strategy for the war-torn country. Not to mention the fact that, in May 2017, Trump disclosed sensitive “code-word information” originating from Israeli intelligence services to the Russian foreign minister and Russian ambassador to the United States at the time.

Trump sycophants are additionally highlighting the March 26 expulsion of 60 Russian intelligence operatives who were in the United States under diplomatic cover and the closure of a Russian consulate as further proof of Trump’s tough stance on Russia. But the expulsion of diplomats is an expected reaction that “represent[s] more symbol than substance.” And Trump also berated administration officials for expelling too many Russian officials, as he was reportedly “furious that his administration was being portrayed in the media as taking by far the toughest stance on Russia” as compared to European allies, who joined the United States in the symbolic gesture.

Moreover, in a still-unexplained proposition in the early days of the Trump administration, officials looked at “handing back to Russia two diplomatic compounds, near New York City and on Maryland’s Eastern Shore, that its officials were ejected from in late December as punishment for Moscow’s interference in the 2016 presidential election.”

In what has emerged as a favorite talking point for Trump defenders in the wake of the meeting with Putin, conservative media are touting an arms deal with Ukraine. The deal, which the Obama administration had resisted, is meant to bolster Ukrainian defenses against the Russian military and pro-Russian Ukrainian rebels. Except Trump stooges in right-wing media fail to mention that the Ukrainian investigation into Trump’s former campaign manager’s shady business dealings in that country conspicuously stopped just “as the Trump administration was finalizing plans to sell the country sophisticated anti-tank missiles.” Not to mention the fact that, during the 2016 campaign, Trump made the laughable claim that the Russian military is “not going into Ukraine,” even though it effectively annexed the Crimean peninsula in 2014. According to Ukraine’s deputy foreign minister, Ukrainian officials were “tearing their hair and running around like crazies” when Trump was elected because of fears over what it would mean for the country.

Trump’s Fox News sycophants have also insisted that by “beating up the NATO allies” at the 2018 NATO summit, Trump succeeded in getting allies to “cough up more money” for the alliance when in fact Trump’s efforts had little to do with members’ increases in direct spending on their national military budgets. According to The New York Times, “each NATO member pledged in 2014,” after the Russian invasion of Ukraine, “to spend 2 percent of its gross domestic product on its own defense each year by 2024. … As a share of G.D.P., spending by European members and Canada began to rise before Mr. Trump took office.”

Conservative media have also pointed to Trump’s critical comments to Merkel at the 2018 NATO summit over the proposed Nord Stream 2 natural-gas pipeline that would run from Russia to Germany as confirmation that Trump is “tough” in dealing with Russia. But previous administrations and a bipartisan group of senators also opposed Nord Stream 2, and Trump himself toned down his criticism after meeting with Putin, conceding that the United States cannot block Germany’s domestic energy decisions. The German Marshall Fund’s Ulrich Speck said the president’s attacks against Merkel “looked as if Trump is looking for ammunition against Germany. If he would have been serious on pushing against Nord Stream, he would probably have brought this up much more forcefully with Putin.” Indeed, a “tough” U.S. policy toward Russia would avoid driving such a wedge between the United States and an ally that has disregarded domestic business concerns to wrangleEuropean Union member states, which had their own economic apprehensions, to join sanctions against Russia for its 2014 invasion of Ukraine.