Donald Trump may be the worst liar in political history: And it's getting worse

With Robert Mueller closing in and midterm elections looming, the president's falsehoods grow ever more blatant 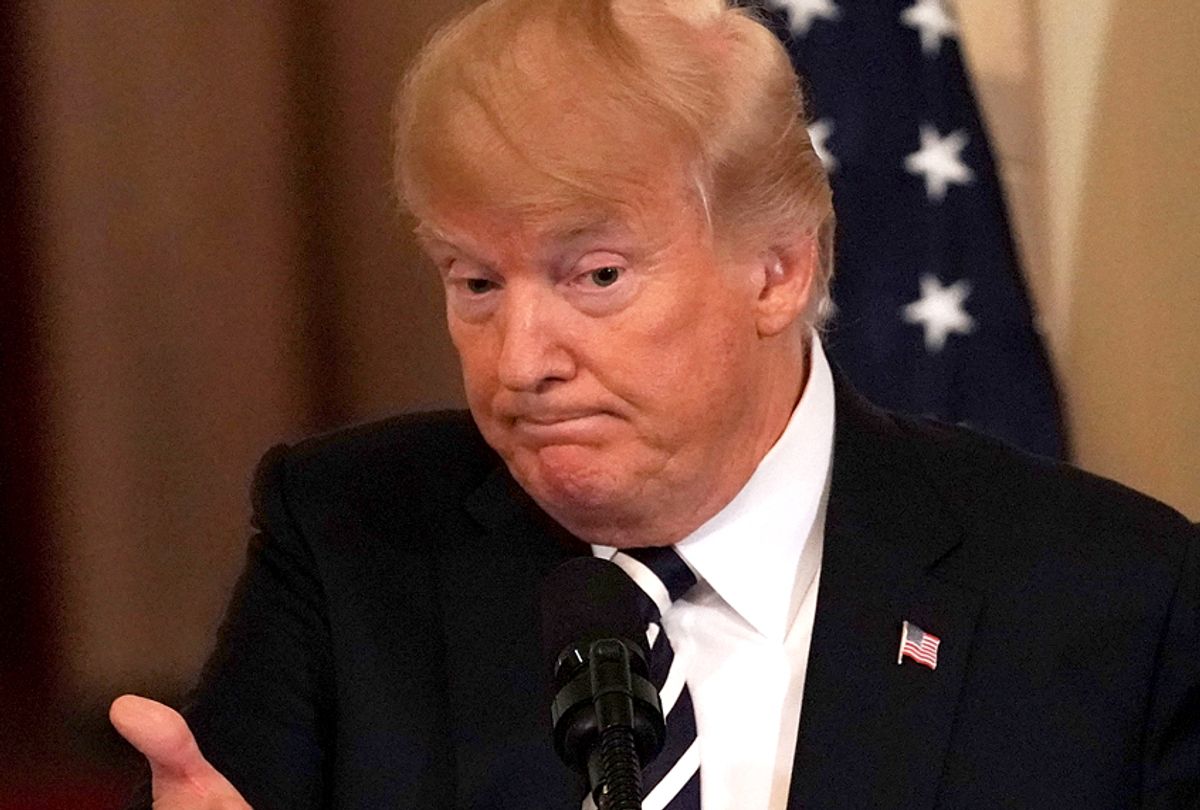 There are no penalties in politics for lying, which is why politicians since the dawn of civilization have succumbed to the temptation to routinely dupe the rubes into supporting them. Generally speaking, most of us have cynically accepted the role of spin and deception in public service, but it’s still infuriating to witness flagrant mendacity up close, especially when the lying is so easily debunked.

We don’t mind as much when the lies are clever and subtle, but our patience evaporates and our heads explode when lies are pumped into the bloodstream of the discourse despite the readily accessible existence of facts.

We’re not talking about statements like: “Trump Steaks are the world’s greatest steaks and I mean that in every sense of the word.” When he spoke those words, Trump was shilling for his crappy beef, desperately attempting to convince gullible consumers that it’s okay to buy meat at The Sharper Image (shocker -- they didn’t). That was how the pre-2011 Trump used behaved, fibbing about the quality of steaks sold in the mall next to personal massage units. We mostly laughed and pointed at the silliness of his clownish pitchman gibberish.

At some point as he turned to politics, however, Trump decided that a certain handful of demographic groups were ripe to be politically exploited and jumped in head-first, tossing aside facts and reality in order to pitch himself as a presidential contender -- truly the personification of awkwardly-placed slabs of Trump Steaks, in stores where no one buys steak.

Where Trump was borderline harmless with his marketing spin, he’s perhaps the worst liar in political history. “Worst” in a number of senses -- both in the sheer number of lies (thousands by the count of the “failing” New York Times) as well as the reality that his lies aren’t believable in any universe. It’s strange that a man known for his lying is so horrendously bad at doing it. Trump is the George Costanza of American presidents, minus George’s comedic charm, of course.

As Trump's presidency slowly collapses around him, as his campaign chairman sits in an Alexandria prison and his eldest son is this close to being indicted for acting as a co-conspirator in the Russia cyber-war against America -- and as his former lawyer and fixer, Michael Cohen, negotiates with prosecutors to expose a panoply of Trump’s crimes -- the lies are growing bigger and more numerous at a ludicrous pace. Amazingly, as the lies increase, each lie seems flimsier than the ones before. Unbeknownst to his loyalists, these latest and flimsiest lies are aimed directly at the continued exploitation of Trump’s key voter demographic.

Trump knows that his marks -- meaning his disciples -- won’t look up the facts. They’ll accept everything he says, mainly because they want to but also because they don’t know any better. A new CBS News poll shows that Trump voters trust Trump more than their own friends and family, by 91 percent to 63 percent. Again, Trump understands what his audience will swallow, and so far they’ve accepted everything he’s dished out. Why not keep going? With Robert Mueller and the midterms closing in, why not push the limits?

On Sunday, Trump tweeted out a lie so provably false it should have been insulting to his supporters, yet they appeared to accept every word.

Yeah, there is something wrong. None of that is true. Nothing even close to public-opinion polling existed during the Lincoln presidency. The Gallup organization wasn’t even founded until 70 years after Lincoln’s assassination, and the first presidential approval poll was conducted after World War II, during Harry Truman's administration. In terms of Lincoln, I’m not sure how Trump expected polling statistics to be gathered before the invention of the telephone, but he certainly expected that his fanboys wouldn’t bother to ask, chiefly because they: 1) don't care, and 2) don't know things. Meanwhile, George W. Bush, following 9/11, was pretty damn close to universal approval within his own party and among all voters.

Beyond Trump’s approval numbers among Republicans, Trump’s overall approval rating was the lowest of all presidents since 1945, at the end of each president’s first year in office. As much as Trump wants his people to think he’s the world’s greatest steak, he’s nothing more than barely edible mall meat.

Poll numbers are easier to comprehend than economic indicators, so Trump’s lies about the health of the economy are even more implausible. Trump’s pitch for his economic record depends on an assumption that very few rank-and-file Trump voters know what “GDP” stands for, much less how it’s measured. The other day, when second-quarter GDP growth was announced to be a not-awful-but-temporary 4.1 percent, Trump announced that this was the greatest economy in the history of all economies, not unlike what he said about his mall meat. He called it “an economic turnaround of HISTORIC proportions!”

He talks as if he inherited the catastrophic Great Recession from day one rather than the continued stability and improvement of the subsequent Obama years. As the saying goes, Trump was born on third base while insisting he hit a triple.

Again, it doesn’t require doctorate-level research skills to learn that his claims simply aren't true. Gross domestic product has been generally consistent since the passage of the 2009 American Recovery and Reinvestment Act. Unemployment numbers dropped from around 10 percent in October 2009 to 4.7 percent by Trump’s inaugural. The Dow climbed from around 7,600 in 2009 to 20,000 by the end of Obama’s second term. All of that occurred during what Trump called “American carnage” in his inaugural address. The trend continues today (thanks, Obama!) and yet Trump refers to a historic "economic turnaround." Turnaround from what? The same exact trend?

The lying apple doesn’t fall far from the lying tree: Donald Trump Jr., the president's eldest son, tweeted an even more ridiculous lie the other day.

Nope. It turns out there were 15 quarters (which is more than none, Donny) when Obama-era GDP growth exceeded 2 percent. Furthermore, the latest GDP numbers were merely the fifth-highest since 2009: there were four quarters during Obama’s presidency in which the quarter-to-quarter GDP grew at a rate higher than today’s numbers. CNBC’s John Harwood reported via Twitter:

To paraphrase writer and lawyer David Harada-Stone, ballyhooing Trump’s 4.1 percent this past quarter as being particularly special is like Trump giving himself a participation trophy. To repeat, the above-listed Obama era numbers were considered part of “American carnage,” yet Trump’s middling GDP numbers are defined as “historic.” Sure, if you’re a sucker they’re totally historic. I mean, Trump’s own Bureau of Economic Analysis has confirmed that the Obama “carnage” numbers were generally in line with what we see today. Womp womp.

These are all stats that are easy to find. But I can assure you that Trump supporters are the least likely to find them, which is one of the reasons why Trump and his goons lie with such breezy self-indulgence. There are thousands of similar examples in the Trump archive, and the MAGA hordes will continue to swallow them into the indefinite future.

Trump knows that his presidency is being propped up by the economy. Without it, he might have been impeached by his own party months ago. So, knowing the gullibility of his people, he’s making sure that at least 40 percent of American voters believe that he has worked an economic miracle in the wake of “American carnage.” He hasn't: He’s selling his people second-hand beef at the mall and assuring them it’s the greatest: “This I can tell you!” So far, he’s gotten lucky, but with his whimsical trade war of choice underway, Trump’s luck might run out soon. When it does, you can bet the lies will get even bigger and more obvious.

Former Maryland governor says our divisive president has toughened up the Democratic Party.