I don’t like Jewish-style brisket. I never have. It’s a hard admission to make! 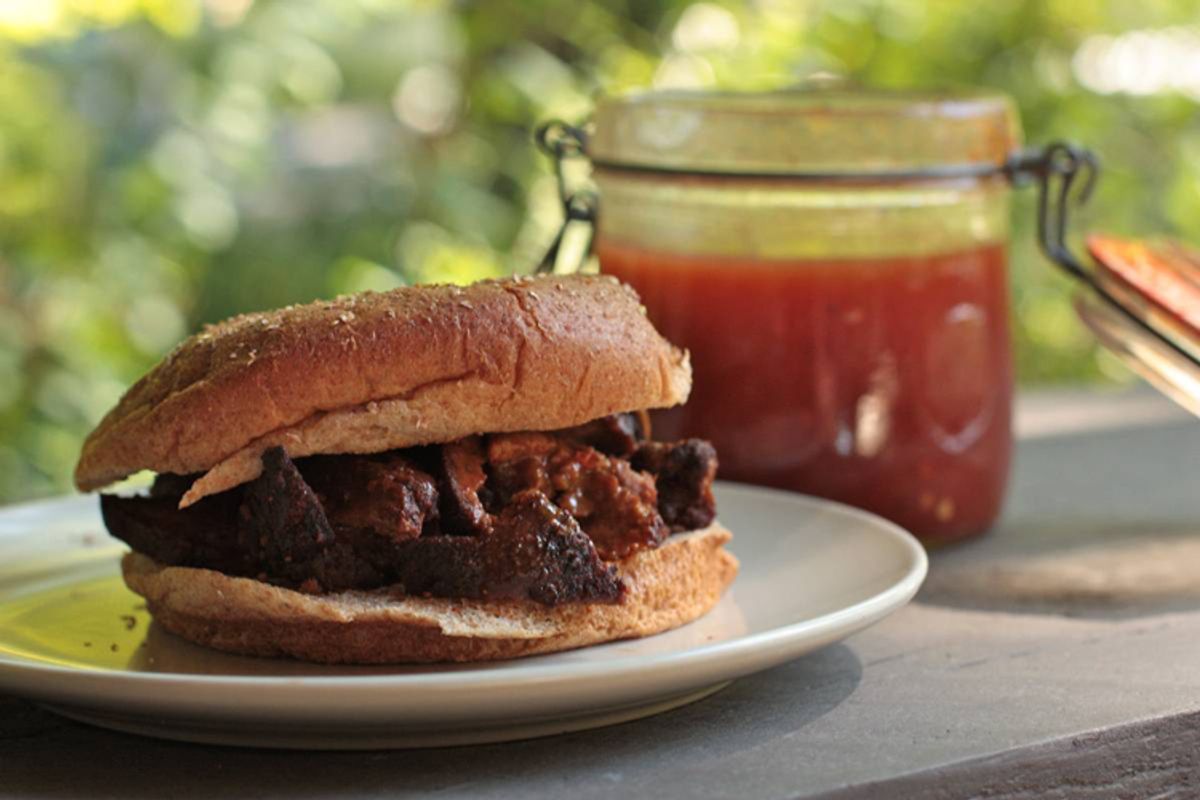 It was 7:30 on a Sunday morning, and I was just biding my time until the grocery store opened so I could buy a brisket. It’s not unusual for me to wake up thinking about dinner, but Jewish brisket is outside my normal rotation. Then again, that particular week had been anything but normal.

I had spent much of the previous week sitting by grandmother’s bed in hospice, recounting happy memories and craving all the foods I ate at her house — her salad, her fruit salad, cottage cheese, bitter coffee with flavored creamer. I got the call at 2 a.m. on Saturday night that she had passed away at 89, due to complications from Parkinson’s. Unsurprisingly, my sleep was sparse and patchy for the five and a half hours between getting the call and deciding to get up and get a brisket. It made sense, then, that I’d be looking for soothing, hearty comfort food, a meal I had at my grandparents’ house many times.

Except I don’t like Jewish-style brisket. I never have. It’s a hard admission to make! This dish is canon and beloved, in my family and beyond, and my quibbles are my own. I just find it too soft and sweet, the meat buried beneath steamed carrots and onions, with hits of ketchup and, if you’re feeling fancy, wine. I always want it to have the meaty intensity and caramelized fat of other brisket techniques. My grandmother’s brisket was a true midcentury special: rubbed with French onion soup mix, wrapped tightly in foil with slices of carrot, cooked at low heat until it was spoon-tender. One time she overcooked it, and the toothsome result finally resembled something I might enjoy.

She stopped cooking brisket — or really anything at all — years before her death. Her senior-living apartment was too small to entertain, and it just wasn’t the sort of thing she would cook for herself. As her health deteriorated, she became more reliant on soups and salads from the dining hall. In the Jewish retirement community, brisket was offered frequently, but I don’t remember her eating it. Maybe she wasn’t a fan either, after all. Maybe she had cooked it because it was simply what one did.

So when I woke up craving it, in addition to looking for comfort, I wanted to carry on the tradition. I was keenly aware of being the daughter of her daughter, and all the responsibility that might entail. I felt a certain urgency to make something that would channel all of her upbringing. I hoped I could make it taste better than I remembered. I knew I would need to use ketchup, but I also knew I should put a sear on the brisket first, and use more herbs and spices. I made it and it was perfect, the ideal of what I thought an Eastern European Jewish brisket should be—deep, rich, caramelized flavors cozied up with crisped fatty edges. It was still softer and sweeter than anything I want to eat regularly, but I felt overwhelmed by love while I was eating it.

I still didn’t like it. But I still loved it.

When you’re a food writer or a recipe developer, like I am, food becomes a sum of its parts: saltiness, acidity, sweetness, bitterness, tenderness. Is it crisp? Is it caramelized? We strive for balance and subtlety, contrasting textures and sometimes temperatures. We look for ways to make our food habits more ethical and sustainable. It’s a thoughtful and generally delicious way to eat; I’m not knocking it. But it doesn’t have a whole lot to do with the foods of my childhood — the starchy things that came together in a hurry, the vegetables cooked just a couple of minutes too long —  that are tied to my happy memories, the ones helped shape me into an adult who cares about food.

My childhood foods were pasta with margarine and parmesan from a can; Morningstar Farms breakfast sausage that bounced off my molars; Edy’s French Silk frozen yogurt, which was light as air and tasted like chocolate-flavored envelope glue in a really delicious way; my mom’s stir-fries; my dad’s endless variations of rice and beans from a stovetop pressure cooker. He made them after my sister and I became vegetarians. When we went out to eat, the fanciest, most divine meal I could imagine was Caesar salad, fettuccine alfredo, and chocolate mousse for dessert. Shrimp cocktail was another special occasion sort of treat, and Whippet cookies were a vacation staple, the chocolate shell cracked with a finger-flick to get to the marshmallow. Not much was gourmet or made from scratch, but these are the foods whose precise being I can recall in any given moment. They’re home base.

Everyone has their own versions of these foods, the things on the table while we formed our childhood memories, whether they’re bowls of frosted flakes or bowls of pho. Whatever critiques we might have about the flavor or texture, these foods overwhelm our senses with comfort and memories. A single bite can bring back the hopes we had, the jokes we told with friends, the happy holidays with family, and memories of times past that we ate them.

When I look at my childhood foods from a critical, technical perspective, the frozen yogurt is too sweet, the pasta is too mushy, the chicken stir-fries just a tad overcooked. There was a level of routine and restraint—one glug of canola, one clove garlic, pressed, chicken breast cut into bite-size pieces, cook until it’s white all the way through—that I don’t practice in my own cooking. My meals are largely driven by what produce looked good at the store, what restaurant dish I’m trying to re-create, or what new jar of pickled-something or chili product I’m using as many ways as I can. I’m an irredeemable tinkerer, endlessly working to achieve dishes that are both exciting and balanced. Constantly surrounded by food content, I’ve developed a madcap refusal to cook the same meal twice — except for when I fall back on the classics.

That's when I reach for the plain pasta, now maybe with olive oil instead of margarine, at least once a week. I love it even though I know that some lemon, a grind of pepper, and some capers — or any other of a million combinations of spices, to say nothing of a pile of roasted vegetables — would make it a lot better. It’s simple and affirming and is the first thing I learned to cook for myself. And when I want to remember my grandparents, and childhood afternoons sitting under the piano reading books, I’ll buy brisket, sear it, wrap it up tight with ketchup, herbs, carrots, onions, and handfuls of herbs, and then cook it until everything’s mush.