Known to be an avid viewer of "Fox & Friends," Trump often tweets messages that correspond to the show's segments 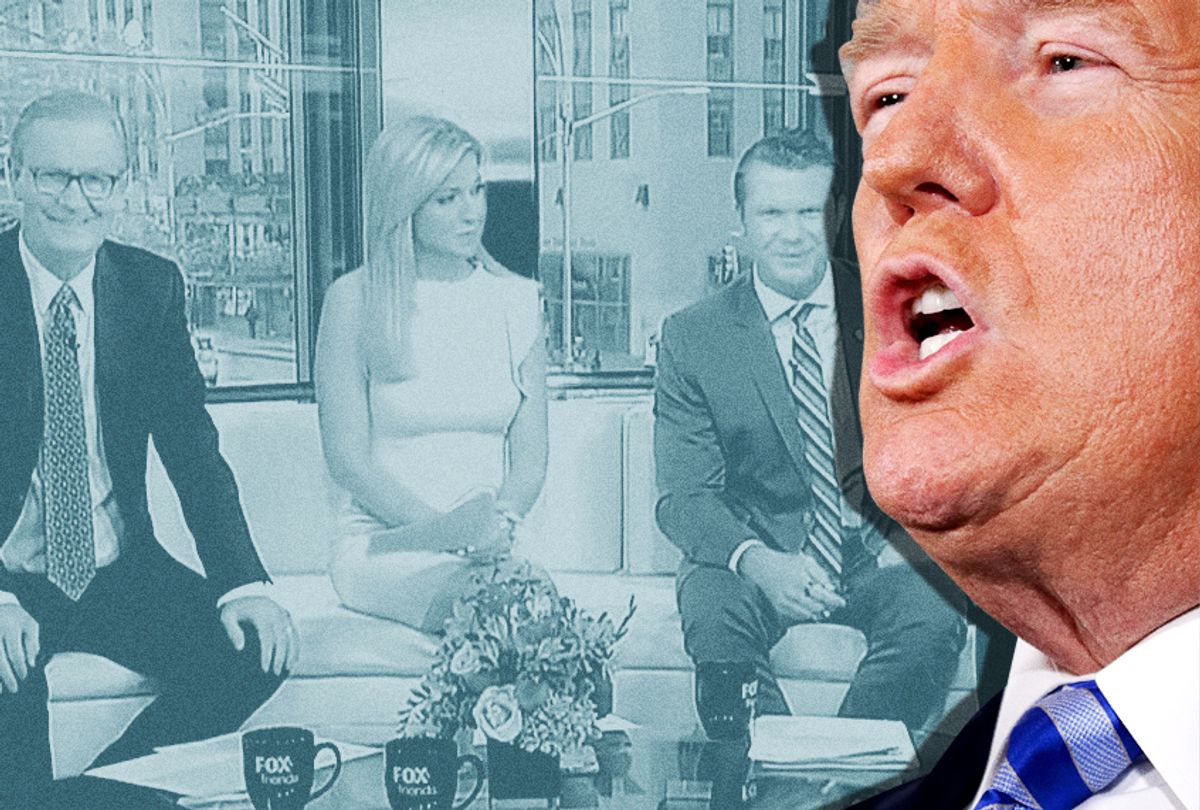 President Donald Trump has allegedly scheduled daily meetings with his advisers based on "whatever he saw on 'Fox & Friends'" in the morning.

A former White House official told Politico that the president has "lots of flexibility" to recalibrate his schedule to accommodate the topics that capture his attention — among them, what is discussed on his favorite morning show or whispered into his ear by trusted advisers like Fox News star Sean Hannity.

“He comes down for the day, and whatever he saw on 'Fox and Friends,' he schedules meetings based on that,” the former White House employee said to the outlet. “If it’s Iran, it’s ‘Get John Bolton down here!’ . . . If he’s seen something on TV or [was] talking to Hannity the night before, he’s got lots of flexibility to do whatever he wants to do.”

This new reporting from Politico was packed inside a larger profile of White House Chief of Staff John Kelly, who is now one year into his West Wing tenure.

Inside 1600 Pennsylvania Avenue, the arrival of White House communications chief Bill Shine has reportedly been viewed as a way to push Kelly out. "They've basically stopped telling Kelly when meetings are. People leave him off the calendar," an administration official told Vanity Fair. "When he finds out, he storms into the room and is like, 'What's going on?'"

Although he was originally seen as the individual who could act as a paternal figure to an executive branch seemingly at war with itself, according to Politico, Kelly has been largely unable to instill a stronger sense of order and structure inside the White House. The retired Marine general, who once referred to himself as the "adult in the room," has reportedly seen his role in the West Wing diminish as his alliance with the president has soured.

In fact, Kelly allegedly told at least one person close to him that "he may as well let the president do what he wants, even if it leads to impeachment – at least this chapter of American history would come to a close."

One White House aide told Politico that Kelly has "not been able to curb Trump's practice of adding and subtracting advisers to meetings throughout the day or of turning scheduled gatherings into freewheeling discussions of subjects that suit his interests — including those suggested to him by his coterie of outside advisers, including Fox News host Sean Hannity."

Trump is known to be a frequent viewer of "Fox & Friends," and he often tweets messages that correspond to the show's segments. The president once even praised the morning show for topping a list of the "most influential in media" – a title given to the show's co-hosts Steve Doocy, Brian Kilmeade and Ainsley Earhardt by Mediate, because they have captured the president's attention.

Last month, Trump even walked out of the White House for an impromptu interview on the show, during which time he offered chilling words of praise for North Korea's dictator, Kim Jong Un.

"I have a fantastic relationship now with North Korea. You know, there were missiles being thought about. People aren't thinking about it anymore," Trump said during his conversation with Doocy. "We get along very well. We had a good chemistry. I don't know if that’s supposed to be popular or politically correct to say, but we really did. We had good chemistry."

Recently, however, the co-hosts of "Fox & Friends" criticized Trump for cozying up to President Vladimir Putin of Russia during his joint press conference with his Russian counterpart in Helsinki, Finland, saying that the American president "fell short" of what was required of him.

The criticism followed Trump's assertion that he believed Putin's word over the findings of the U.S. intelligence community that Russians had interfered in the 2016 presidential election.