"Making It" and the bittersweet economics of crafting culture 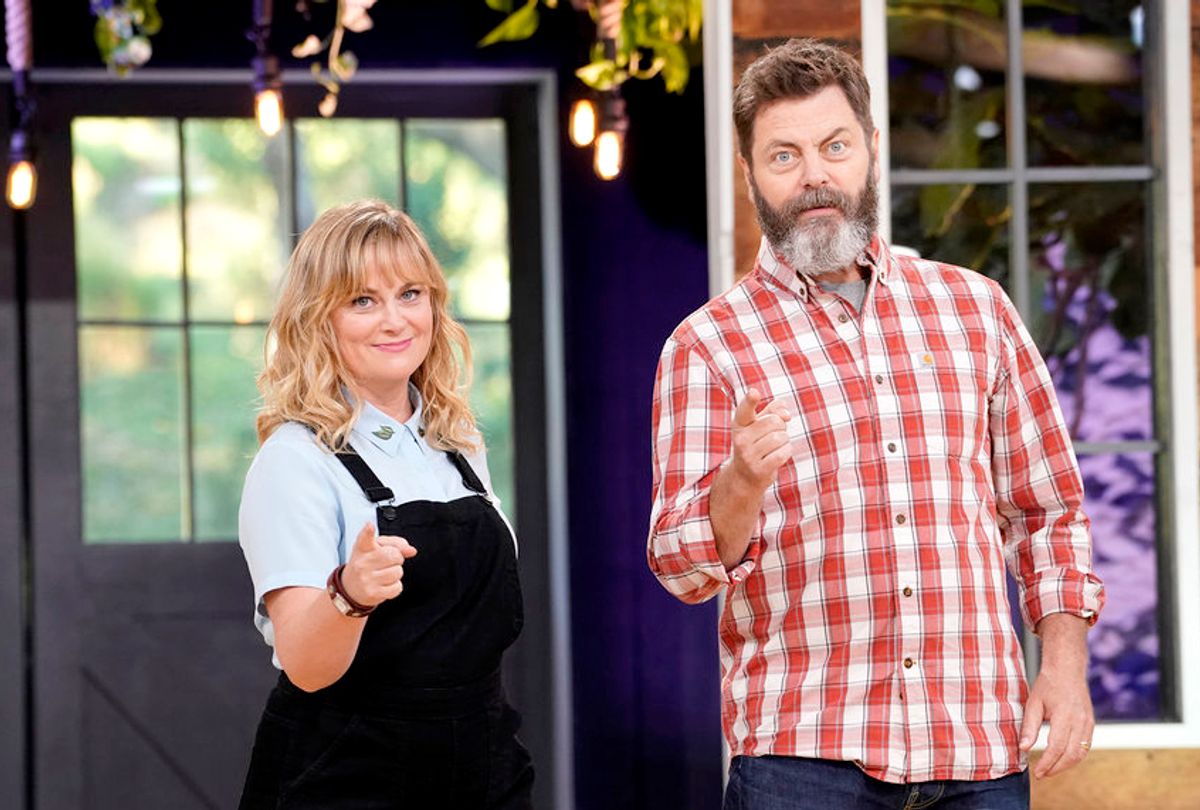 Amy Poehler and Nick Offerman in "Making It" (Paul Drinkwater/NBC)
--

Following many seasons of worshiping meaty dramas about anti-heroes and the darkness of the human soul, the emotional market value of feel good television has never been higher. That’s what it feels like anyway; inspirational uplift that is thoughtful, apolitical and impeccably executed is always in short supply, especially in the unscripted competition realm. And rarity creates a high appreciation.

Knowing this accentuates the joy of watching NBC’s “Making It," a six-episode crafting competition series debuting Tuesday at 10 p.m. People who follow the cadence of summertime programming may be tempted to dismiss a show like this as summertime filler, the kind of easy view that keeps the lights on in that dead zone between August and the kick off of the new fall television season.

While that may indeed be its function from an industry point of view, “Making It” also serves as a validation of American moxie and creativity as it is realized by humble, anonymous home crafters.

Devotees of “The Great British Bake Off” also will find the format familiar, with hosts Amy Poehler and Nick Offerman standing in for the Brit hit’s Mel Giedroyc and Sue Perkins, and hobbyists taking the place of home bakers.

Like Giedroyc and Perkins, Poehler and Offerman enjoy a friendship established in fiction (via “Parks and Recreation”) and whose chemistry ripples through every scene. In place of a tent is an open-air workshop in a vast green space.

And like the bakers in “The Great British Bake Off,” the crafters are polite competitors united in their love of creativity, in producing intricate handiwork and in delighting in the possibility of creating divinely-inspired works of heart out of such humble materials as felt and paper, washers and buttons and glue.

Each episode poses two project challenges, the first being a “Faster Craft” competition requiring contestants to come up with an original and imaginative work under a time crunch. The main event is the “Master Craft,” where competitors are provided with a classic craft inspiration that serves as a leaping off point. This is where an individual’s originality and ingenuity is truly put to the test, with each drawing upon their area of expertise to pull arresting works of art out of thin air.

Any tension in the air is the result of overly ambitious plans being thwarted by time constraints, and instead of frets over “soggy bottoms” and other baking related failures, sub in uncooperative wires and spilled blood. Each week’s winner gets a special patch. The ultimate victor scores the title of “Master Maker” and a $100,000 grand prize.

“Making It” is, itself, a craft of love from Poehler’s production company Paper Kite. Her good-natured touch and Offerman’s (with whom she shares an executive producer credit) permeate the production. They’re buds, with Offerman’s craftsman background balancing her gee-whiz appreciation but professed lack of skills.

Throw in an emphasis on cameradie as opposed to competitive snark, and this adaptation of the “Bake Off” format works beautifully — enough to be considered a better translation of “Bake Off” than previous Americanized versions.  The materials may be different, but the energy is nearly identical.

Crafting, and our love of handmade things, may not be a uniquely American trait. But it hooks into our internalized connection to homesteading and inventing. Part of the white picket fence version of the American dream includes a workshop to fix or augment items, to work on cars or restore furniture. (Offerman, the author of “Paddle Your Own Canoe,” is a talented woodworker who makes his own boats.)

Tea time and its baked accompaniments, on the other hand, is not part of the American identity. Netflix's "Nailed It" demonstrates our curious relationship with baking and culinary expertise in hilarious fashion. But the fact is, our relationship with food in the modern era has a stronger connection to automation and convenience than to artistry. If we don't have the money, we don't have the time or the burning desire to source great ingredients, to grind spice, chop produce and take more time to prepare food than we do to eat it.

Even the concept of making meals from scratch is so daunting that a mail-order industry has arisen in response to that anxiety. All of these developments are products of a gradually, steadily lengthening work day (and work week), and paychecks that have not kept up with inflation.

These facts, actually, add a bitter note to the sweetness of “Making It.”

In no way is this the show’s fault. Poehler, Offerman and the show’s judges, Etsy trend expert Dayna Isom Johnson and renowned Barneys New York Creative Ambassador Simon Doonan, display a reverence for the awe-inspiring creativity unfurling in their presences. No critique is unkind.

But while the competitor pool consists of people who come from a range of backgrounds, only a few of said backgrounds could accurately be referred to as humble.

Mind you, the fact that these crafters star on a major network series indicates a heightened interest and appreciation for self-developed skills. It’s wonderful that a felt artist like Billy Kheel and a paper artisan such as Jeffery Rudell are placed on equal footing with 60-year-old Jemma Olson, described as coming from “a generation of crafters that made things out of necessity as opposed to beauty.”

Olson is unique in that sense. The rest of the starting eight have educational backgrounds that include college and professional training or an entrepreneurial knack. Olson is competing against an interior designer, a man who has created designs for the likes of Tiffany & Co., a blogger and online influencer, and a woodworking craftsman who co-founded his own company, among others.

But out of all of the contestants featured in “Making It,” Olson most closely embodies the classic crafting spirit while unintentionally and covertly illustrating a sad fact about crafting in the modern era, which is that it’s largely a hobby enjoyed by people with time and disposable income. The well-off, in other words.

Crafting remains a relatively egalitarian enterprise, of course, but it’s also an increasingly expensive one. Into each generation is born a slew of stories about young people taking up granny’s handmade pursuits. Generation X returned to graceful living thanks to Martha Stewart’s emphasis on the thriftiness of gardening, cooking and second-hand shopping for “shabby chic” relics.

Millennials took up knitting and sewing, and that's delightful and heartening for Boomers who fret that the skills passed down to them may die out for lack of use. But most of this trend coverage overlooks the fact of how expensive these pursuits are, economically and time-wise.

These days, despite the rosy news surrounding the economy, the bottom 60 percent of income-earners are mostly getting by via a cycle of borrowing, according to an analysis by Reuters. People in that income bracket aren’t leveraging their credit card debt by buying skeins of yarn or sewing machines and fabric. They’re paying their rent and buying necessities.

Factor in stagnant wage growth, and you also have a populace where having more than one job is a necessity.

Etsy may provide a side gig for some people, but it’s only a steady paycheck for a lucky few, the likes of whom you may see on this show.

Crafting can still be an inexpensive pursuit that allows artists to create wondrous works out of found objects or treasures sourced at garage sales. But you have to have the time and energy to source those raw materials, two resources that also happen to be in short supply for the average working person.

Yet at the very least, Olson is there among the trained artists and designers, representing the common crafter who nurtures ambitions of materializing the creative visions spinning within their minds, if only they had more money or time. It is those people, and the many window shoppers eyeing handicrafts on Etsy and eBay, who may be energized by this gentle, positive and motivating show.

Above all “Making It” is a bright, busy and inspiring palate cleanser, and that's reward enough to anybody who just wants to melt into the couch after being battered by a tough day. But that $100,000 prize may go some way toward incentivizing a few latent crafters to dust off that old hobby and get back on the hand-crafting horse.

The “Parks and Recreation” star discusses the idea of a prophet for rural America.