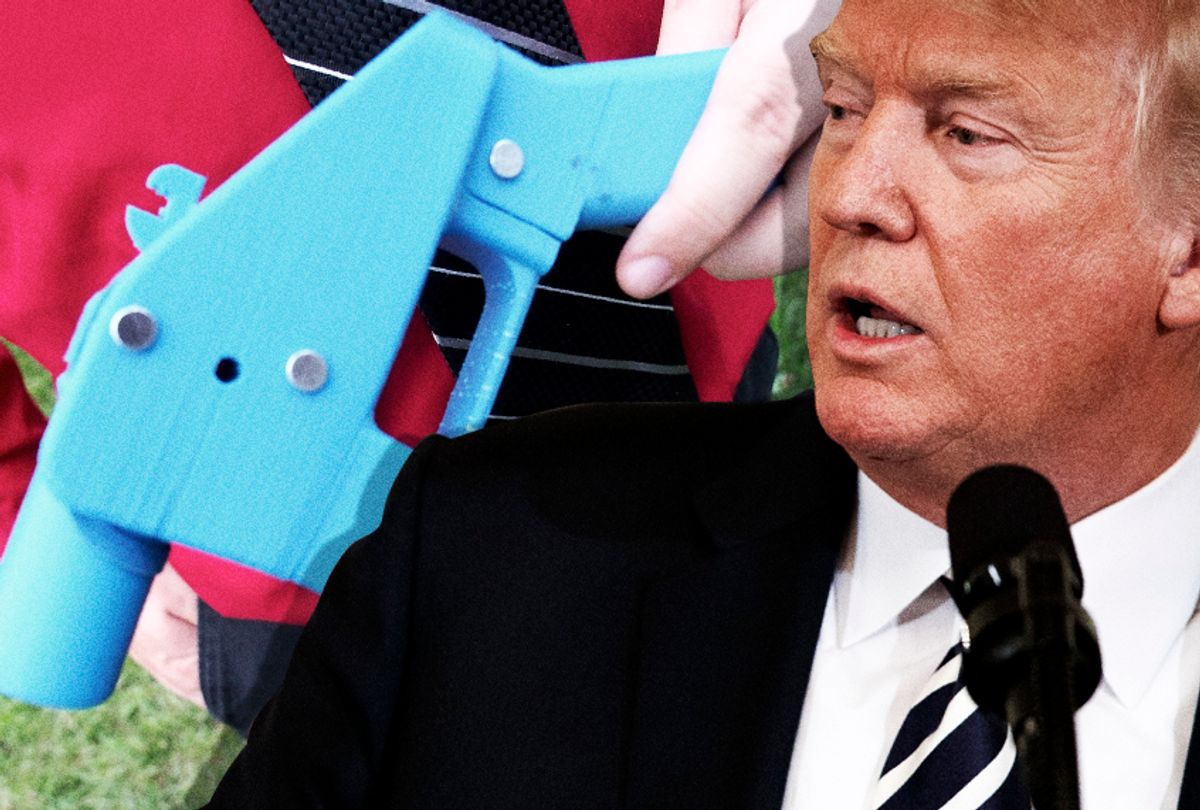 In a somewhat surprising move, President Donald Trump took to Twitter on Tuesday to deviate from the position of the National Rifle Association (NRA).

"I am looking into 3-D Plastic Guns being sold to the public," Trump announced in a Tweet on Tuesday. "Already spoke to NRA, doesn't seem to make much sense!"

Trump's tweet is particularly notable because the blueprints for these build-at-home "3-D Plastic Guns" may soon be sold to the public thanks to a recent Trump administration decision, a point raised by Senate Minority Leader Chuck Schumer in his own Tuesday morning tweet.

"Your administration approved this," Schumer tweeted. "What kind of incompetence and dangerous governing is this? And to check with the NRA? Holy moly."

“It just defies common sense. And yet this is what the Trump administration has done,” Bill Nelson said.

Earlier this year, Trump's Department of Justice decided to side with the gun manufacturer Defense Distributed in a yearslong battle over public access to such materials. As The New York Times reported earlier this month, the State Department under President Barack Obama viewed such printable weapons as a national security threat, but Attorney General Jeff Sessions dropped a federal suit against the gun manufacture this year:

The United States last month agreed to allow a Texas man to distribute online instruction manuals for a pistol that could be made by anyone with access to a 3-D printer.

The man, Cody Wilson, had sued the government in 2015 after the State Department forced him to take down the instructions because they violated export laws.

Mr. Wilson, who is well known in anarchist and gun-rights communities, complained that his right to free speech was being stifled and that he was sharing computer code, not actual guns. The case was settled on June 29, and Mr. Wilson gave The New York Times a copy of the agreement this week. The settlement states that 3-D printing tutorials are approved “for public release (i.e. unlimited distribution) in any form.” The government also agreed to pay nearly $40,000 of Mr. Wilson’s legal fees.

Lest there be any doubt that Trump knows his administration is directly responsible for these plastic guns becoming possible — or, at the very least, that he should know his administration bears that responsibility — there is the fact that attorneys general from 21 states as well as the District of Columbia filed a lawsuit against the Trump administration over this issue on Monday.

In a statement released at that time, Washington state's attorney general Bob Ferguson pointedly held the Trump administration accountable for its policies regarding the printable guns.

"I have a question for the Trump Administration: Why are you allowing dangerous criminals easy access to weapons? These downloadable guns are unregistered and very difficult to detect, even with metal detectors, and will be available to anyone regardless of age, mental health or criminal history. If the Trump Administration won't keep us safe, we will," Ferguson said in his statement.

One reason the Trump administration won't keep Americans safe was illustrated in the weeks following the devastating Valentine's Day school shooting in Parkland, Fla. On two separate occasions, the president made statements suggesting an open-mindedness toward gun control measures, only to walk that back after a few conveniently timed meetings with NRA officials.

First he took back a willingness to consider raising the minimum age to purchase guns after he had a meeting with members of the NRA on a Sunday, then days later he came out in favor of strengthening background checks and even seizing people's guns without due process, only to reverse that position during a Thursday night meeting with Vice President Mike Pence and NRA lobbyist Chris Cox. Cox later bragged about the effectiveness of that meeting on Twitter.

For their part, the NRA-ILA , the legislative arm of the NRA, is attacking Democrats for bringing attention to the issue.

“The Senate minority leader decided to fear-monger about homemade 3D-printed firearms following a Justice Department settlement that will permit firearm schematics to be more readily shared online,” a recent story on the NRA-ILA site read.