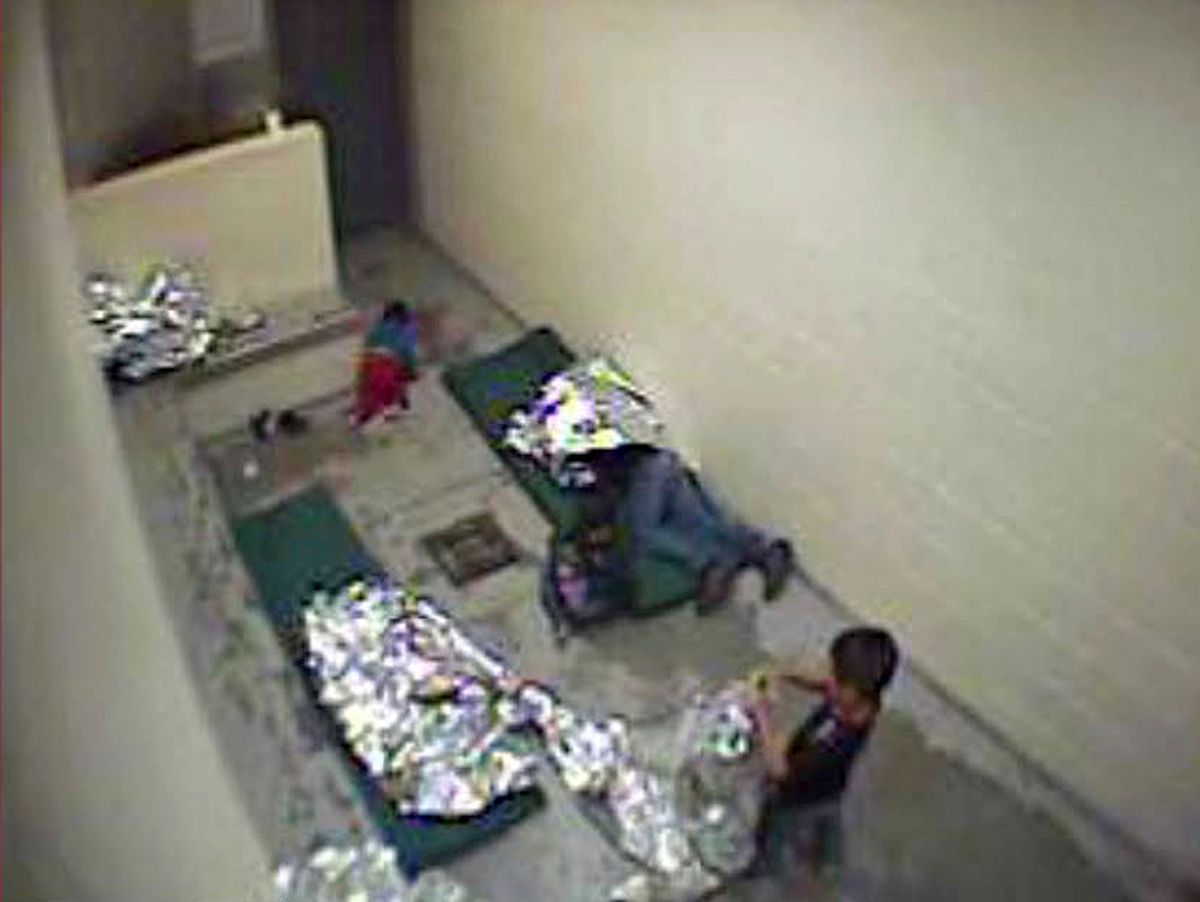 FILE- This September, 2015 file image made from U.S. Border Patrol surveillance video shows a child crawling on the concrete floor near the bathroom area of a holding cell, and a woman and children wrapped in Mylar sheets at a U.S. Customs and Border Protection station in Douglas, Ariz. A federal judge says the Border Patrol in Arizona violated court orders by failing to properly keep surveillance video pertaining to a lawsuit claiming the agency holds migrants in inhumane conditions. Judge David Bury partially granted a motion on Monday, March 13, to hold the Border Patrol's Tucson Sector in civil contempt over video files it was legally required to provide but which were irreparably damaged.(U.S. Border Patrol via AP, File) (AP)
--

Immigration has become the hot-button issue of the midterms, thanks to Trump’s rhetoric, his administration’s zero-tolerance policies and the horrifying optics and audio files of his baby jails.

A recent Gallup poll found that 22 percent of Americans consider immigration the “most important problem facing the country today” — the highest number since Gallup began asking this question 17 years ago. The last time immigration reached a level near this was in 2006 when it rose to 19% as the government under President George W. Bush was trying to pass a comprehensive immigration bill.

It’s noteworthy that 35% of Republicans see immigration as the country’s top problem compared to 18% of Democrats. For Democrats, the top issue was government, at 27%, according to the Gallup poll. Independent voters found immigration and government to be tied for the top issues at 17%. Perhaps even more striking about the poll findings is the fact that the Republican interest in immigration represents a 14% spike from a month ago.

So, the question becomes how will this shape the midterms? A recent Quinnipiac poll found that nearly 80% of Republicans approve of Trump’s job performance on immigration. Huh? But that takes into consideration his reversal on his zero-tolerance family-separation policy. It’s murky ground here nonetheless.

Perhaps what offers a shred of hope is the fact that some politicians on both sides of the aisle have begun rejecting the political donations from the political action committee of GEO Group, the country’s largest for-profit prison company.

Since January 2017, GEO Group, its employees and its PAC have spent more than $800,000 on political contributions. In May, the PAC donated just over $100,000 to federal candidates. But due to the company’s role in the holding of immigrants detained at the Southwest border, 10 Congressional members either rejected or refunded contributions in June. Due to the uncashed contributions, the PAC’s June spending total was a negative $3,000. Of the 10 Congressional members, eight were Democrats, according to the Center for Responsive Politics.

Sen. James Lankford (R-Okla.) was the only non-retiring Republican to return a contribution last month.

In April, the Boca Raton, Fla.-based company, which operates six prisons in Florida, donated $10,000 via two contributions to Gov. Rick Scott’s Rep. Senate campaign. But a month later, the PAC reported those checks as “void” and a spokesperson for Scott claimed to have never received the donations.

GEO Group has received $560 million in government contracts from Immigration and Customs Enforcement (ICE) since October 2016 to oversee several ICE detention centers. It gave $225,000 to a pro-Trump Super PAC during the 2016 election and another $250,000 for Trump’s inauguration.

GEO Group aggressively lobbies the government on behalf of immigration policies and spent $1.7 million in 2017 — the highest amount on record for a private prison contractor. Through June of this year, it has spent close to $600,000 on lobbying, according to the Center for Responsive Politics.