Cooking on an open fire is great, if you're doing it for the right reasons; one of the best reasons is lamb burger 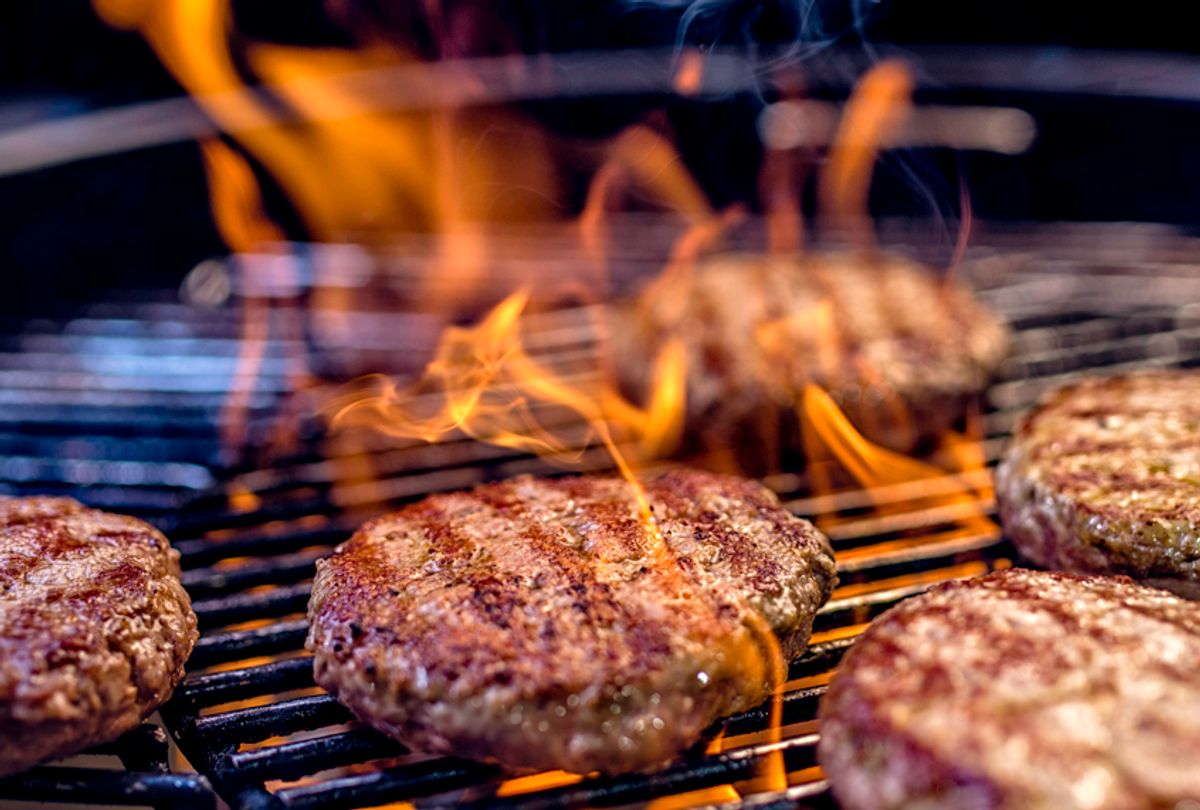 My family and I all stood around the campfire set off in a field at our country place as the night's chill pressed in. Off in the distance, we could see the lights of Stanstead, the nearest small town and above an amazing splash of stars. On the grill was the rabbit my father had, that morning, shot and killed. Every once in a while there would be a small flare up when a buckshot pellet released from the ever-shrinking creature fell into the fire. I remember my mother keeping up a running dialogue as she stood one minute warming her face as her backside froze then turning to warm her backside, so some of what she was saying was lost to the autumn chill. But the gist of it was: This is how you prove your manhood?

It was yet another irritant in my parent’s marriage that my mother, born in the East End of London, had weathered the full brunt of the Blitz. For her family it had been day-to-day struggle to survive. My father, on the other hand, rode out most of the war in the relatively safety of Orpington, Kent, only joining the R.A.F. after the show was all but over. Survival instincts bred in his mind were the kind that every adventuring boy dreams of.
READ MORE: The “Boys’ Night In” pork taco recipe
Naturally, in the war that is marriage, my mother brought up this disparity quite often, especially, when my father tried to teach his three daughters (who by all rights should have been boys) the bare minimum of wilderness survival. I think I was the only one who even half listened as he told us that, should we ever find ourselves lost in the woods, all we had to do was shake a porcupine out of a tree, club it on its head, roll it in mud, bury it in a pit full of hot embers, wait six hours, then peel off the baked mud which would pull with it not only the quills but all the skin, leaving one with a fine dinner.

So on the morning he went out to kill a rabbit it made perfect sense to me. Not to my mother, nor the rabbit I would imagine.

When my father deemed that the rabbit was done, we were handed a charred minuscule piece, which judging by the discrete spitting going on was more buckshot then actual meat, even so, we all pretended to be grateful to survive that night on the bounty of my father's efforts. Thank god for marshmallows, the bribe that got us to eat the poor rabbit in the first place.

Years later I would think of that night when I was beside yet another campfire, this time in Kenya, up near Lake Turkana. I was working on an ethnographic film about the Turkana Tribe. Most of the filming had been pretty benign as I, and the director/cameraman followed the nomadic tribe around which, to my disappointment, did not wander hither and yon on a whim, but rather followed strict routes. But this Nilotic tribe, apparently, had some media savvy. When a camel turned up lame, they wanted us to film how they would have killed it in the good old days before guns.

Sacrificing such a valuable animal was only done to ward off starvation during times of extreme drought and was treated with due reverence. One problem with this plan, the younger members of the tribe had long forgotten how to wield a spear with any of the strength and grace needed to dispatch the camel without causing any suffering. Most of the spears pinged off its flank. A few made contact but nothing close to a kill. The filming of this horror show was rendered unusable by the sound of me screaming. Finally, an elder could take it no longer and put the camel out of its misery with a bullet to the head.

The story doesn't end there, the kill may have been bad, but the camel did not die in vain. And, as special guests, we were presented with a rib, which our hosts told us, was the prime cut. That night with the entire tribe looking on, I roasted the rib. If a human can feel like a cartoon character, then Fred Flintstone had nothing on me, as I grappled with the three-foot rib to make sure the whole of it was evenly roasted, no small feat. Neither was my feigned delight when I sunk my teeth into the gamey, greasy flesh.

The tribe all nodded with approval. Now, should I find myself alone in the African bush, well, I can cook a camel. I will survive. After we had had our fill, we offered the rest to the tribe, and they tore into the meat with a little more gusto than I had. I don't know if they kept the rib for a bone broth. I hope so, for the visual alone.

Somewhat surprisingly, I love to cook meat on a wood fire. Every time I gather kindling and begin to build a pyramid that will ignite a fire that will eventually crackle down into a bed of glowing embers, I feel stirrings right down to my DNA. Here I am, I think, part of a legacy of the survival of the fittest.

Lamb burgers on a wood fire.

I like to ground my own meat using a combination of leg and shoulder. Or have your butcher create a grind for you.

Cut the meat into one-inch cubes. Freeze for about twenty minutes then working in small batches and employing short pulses grind the meat in a food processor. You don't want it turning to mush.

Working the meat lightly add salt, pepper, and some fresh rosemary. Not too much. Rosemary can make things taste bitter if there's too much.

Put in fridge let rest at least a couple of hours.

Build your fire. A big one so you have plenty of low coals.

When you make the patties, form it around a slice of any feta made with sheep's milk.

Get the grate hot and start to cook the burgers. You don't want them to be rare like a hamburger, but you don't want it a hockey puck either. The meat is done when there's a slight spring, a firmness to the touch.

You can top it with all sorts of things. Tzatziki, red onion, more feta, lettuce, tomato. Your choice really.