Pals again? Donald Trump says he got a "nice letter" from Kim Jong-un 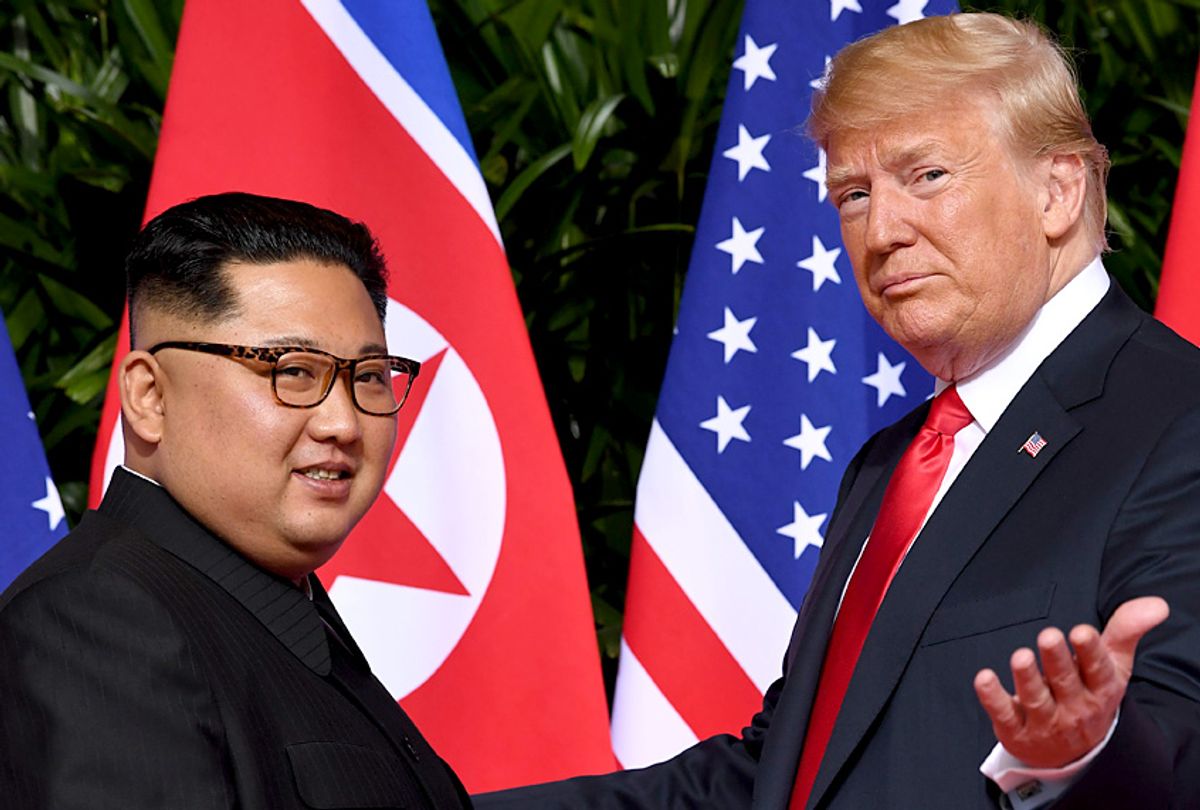 Despite what many viewed as his recent humiliation at the hands of the North Korean leader Kim Jong-un, President Donald Trump expressed happiness Thursday at receiving a "nice letter" from Kim.

"A letter to President Trump from Chairman Kim was received on August 1," Sanders told reporters, according to CNN. "The ongoing correspondence between the two leaders is aimed at following up on their meeting in Singapore and advancing the commitments made in the U.S.-DPRK joint statement."

Trump's had an immediate reason for expressing gratitude to Kim. On Wednesday, the North Korean government sent 55 cases to a U.S. military base in Hawaii that were believed to contain the remains of Americans captured or killed during the Korean War. Several thousand American troops -- and a much larger number of South Korean troops -- are still listed as missing in action from that conflict, which ended in 1955 (although no formal peace treaty was ever signed). Many of the missing soldiers are believed to be buried in mass graves, and may never be identified.

Kim's actions have been generally regarded as a positive first step toward addressing that ongoing conflict between the two nations. U.S. experts have confirmed that the remains delivered to Hawaii this week are most likely those of American troops from the Korean War era.

None of that addresses a bigger issue fueling tension between the two nations: North Korea's apparent ongoing efforts to develop nuclear missiles. Because Trump's Singapore summit meeting with Kim was a major public relations victory for North Korea, the president is now under significant pressure to deliver results in terms of moving North Korea toward the promised "denuclearization" of the Korean peninsula.

"There are pros and cons of a meeting and there are pros and cons of this meeting," Laura Rosenberger, who served as a foreign policy adviser to Hillary Clinton's 2016 campaign, told Salon in April. "The reason I make that distinction is that normally when you have a summit between two leaders, there are months of planning that go into that summit."

She added, "What Trump has done here is put that [meeting] at the front, without a clear sense of what the agenda is, having given up the leverage we would have by the fact of this meeting. That means the stakes here are extraordinarily high. The consequences of failure are quite significant, in the sense that ... once you have a meeting at the presidential level, you don't have much runway after that."

Rosenberger also pointed out that if North Korea failed to deliver on its promises regarding belligerent testing activity, President Trump could be backed into a corner where his pride might require military action against the burgeoning nuclear power.

Rosenberger said she could not imagine that Trump and Kim would "reach meaningful agreement on anything other than broad platitudes at the table," which seems to have been prophetic. After that, she said, "You need agreement on a process to work out these issues after the meeting. If that doesn't come about, given what we have already seen from this administration I think we risk falling off the cliff to a military option."

There are signs that U.S.-North Korea relations could still head in that direction. A report by the Washington Post earlier this week revealed that North Korea is constructing new missiles at a factory that produced the nation's first intercontinental ballistic missiles capable of reaching the United States. Before that, other evidence had emerged to suggest that North Korea was continuing its work on advanced weapons, including continuing to manufacture fissile material used to make nuclear weapons, despite Trump's declaration that the nation was "no longer a Nuclear Threat" after his summit with Kim in Singapore.

For the moment, the State Department continues to insist that North Korea is honoring its commitment.

"What we are going on is the commitment that Chairman Kim made to our president, and that is the commitment to denuclearize," State Department spokeswoman Heather Nauert told reporters earlier this week, according to CNBC. "That is something that we certainly anticipate that he will hold up his end of the bargain."