Like his buddy Donald Trump, Kobach realized he could strike gold in the grand con game of conservative politics 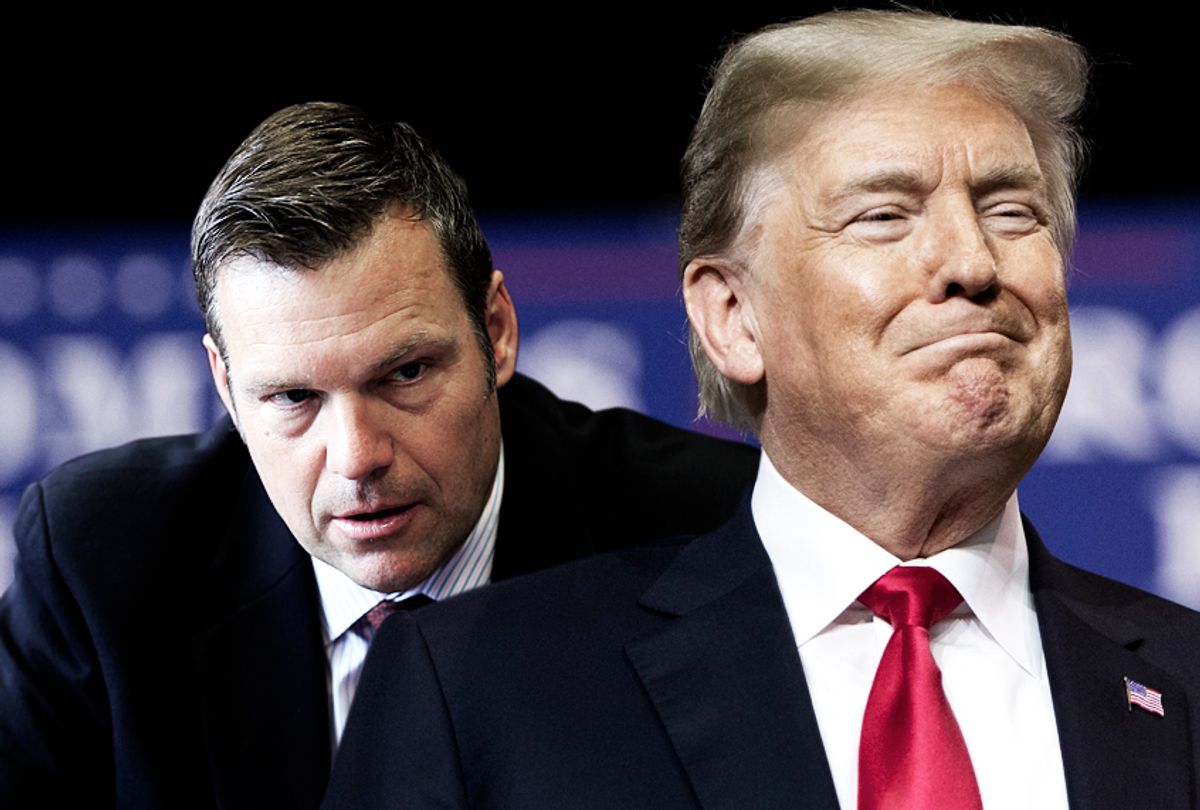 Kris Kobach, the former head of Donald Trump's swiftly discredited "voter fraud" commission, turns out to be not just a racist but a con man who exploits the bigotry of his fellow conservatives to line his own pockets with taxpayer money raided from small-town budgets. I know: Deeply shocking, right? At least that's the undeniable conclusion any good-faith reader reaches after finishing this exposé, a collaboration between journalists at ProPublica and the Kansas City Star, about Kobach's cross-country trail of grift.

Kobach's strategy was simple: Convince local governments in rural communities in states like Texas, Pennsylvania and Nebraska that the citizenry was under some kind of threat from undocumented Latino immigration. Help the town or city write ordinances designed to harass such people into leaving, and offer Kobach's well-compensated legal services to defend the ordinance against the inevitable ACLU lawsuit. Assure the municipality that a court victory would be swift and certain, and then rake in the legal fees while lawsuits and appeals drag on. Once the smoke has cleared, the town is usually out millions of dollars, the ordinance has been gutted by the court, and Kobach walks away with his bank account fatter than before.

The story is a fascinating one, but for longtime watchers of the American right, there's nothing surprising in any of this. For decades, con artistry has been woven into the fabric of conservatism. While racial minorities, LGBT people, women, urban dwellers, journalists and other assorted hate objects are the principal focus of right-wing rhetoric, the target of the right-wing con artist is generally his fellow travelers, true believers of the conservative movement.

This long tradition of conservative grift led directly to the election of Donald Trump, a man who seems constitutionally incapable of making an honest buck and has flagrantly used his presidency as an opportunity to redirect massive amounts of taxpayer dollars into his own coffers.

Historian Rick Perlstein laid out the history of this in a 2012 piece for The Baffler, in which he detailed how right-wing politics are often little more than a way to attract eyeballs and lower audience resistance, the better to sell conservatives all manner of snake oil. Right-wing sites like Newsmax, Townhall and Human Events push readers to sign up for email lists, and then they sell that subscriber information to sleazy third-party vendors who, correctly assuming that they have an especially gullible audience, inundate right-wing readers with ads trying to lure them into all sorts of dubious transactions. Financial scams, fraudulent supplements, fake "cures" for disease and useless or overpriced "survivalist" supplies are some of the most common cons being hawked through right-wing email lists.

To be clear, liberal political magazines also sell their subscriber lists to advertisers. But as Perlstein noted, they tend to sell those to charities trying to raise funds or to legitimate businesses, not the rip-off artists that populate the advertising revenue streams of the right.

For a time, Media Matters tried to track these schemes, detailing how pundits like Erick Erickson and Mike Huckabee, for instance, make a killing selling their subscriber lists to advertisers who offer such things as "President Ronald Reagan's Secret Victory Over Cancer." But ultimately, the work was overwhelming: Nearly every right-wing figurehead out there has just such a list and uses it that way. It would no doubt be easier to make the list of those who don't do that than to keep track of all the schemes the right-wing punditocracy has cooked up to fleece its audience.

Alex Jones of Infowars has gotten a well-deserved amount of heat for his relentless direct sales of useless supplements and other fraudulent products, but honestly, Jones is no different than more "mainstream" right-wing media figures in that respect. One main reason that media sector seems to do so well financially while the world of legitimate journalism struggles is that conservatives have no apparent reluctance to defraud their audiences.

A similar fleece-the-right mentality has helped fund the rise of fraudulent super PACs, including one run by Sarah Palin. Such groups raise money by promising to help elect Republicans to office but actually spend most of the money on "operating costs," which means more fundraising efforts and paying exorbitant salaries and consulting fees to the people who started the PAC.

Of course, there are also the televangelists. The entire Christian right continues to be full of sleazy ministers who feign piety to get the wallets open and the coffers filled. That con has become so blatant that a TV preacher like Jesse Duplantis can simply tell his followers that God told him he needs a $54 million private plane, with the full expectation they will buy it for him — as indeed they did even when God informed Duplantis he needed three more planes after that.

Again, to be clear, there are inefficient nonprofits, badly run PACs, shady advertisers and the like to be found on the left. But overall, the outright fraud and snake oil salesmanship is minuscule among liberal and progressive groups, as any journalist who has signed up for email lists from both sides of the aisle could tell you. In many cases, the bad actors on the left are individuals who take advantage of people who are trying to do real work. On the right, however the grift is deeply ingrained and systematic.

It's not clear why this sort of thing appears to be exponentially more common on the right. Perhaps the cynical, pseudo-Darwinian worldview of many 21st-century conservatives — the same worldview that sneeringly labels kindness as "virtue-signaling" and good manners as "political correctness" — makes it easy to justify making money through deceptive means. Maybe conservative audiences, awash for the last several decades in conspiracy theories and misinformation, are easier to defraud. One crucial aspect may be that conservatives are always eager to believe that they're not the ones getting screwed over, but the other guy is — that kind of unearned self-confidence makes for an easier mark.

Either way, the same forces that made it easy for Kris Kobach to scam one town after another also allowed Trump, an obvious grifter whose fake "university" was literally being sued for fraud during the 2016 presidential campaign, to get the majority of Republican votes. The man who rings alarm bells for so many seemed familiar to right-wing audiences, pretty much the same snake oil they'd been imbibing for decades. Trump wasn't even the only candidate in the GOP primary whose primary goal was making money. Ben Carson, who has made money shilling for fake cancer cures and has a history of involvement with a scam PAC, used the free advertising of his brief presidential campaign to create an email list of 700,000 names.

It may seem easy to dismiss the intra-right pickpocketing, especially if you don't find its victims especially sympathetic figures. But the distressing thing is that there's still a lot of damage to innocent people in the process. Trump's presidential run, which probably did start out as a way to burnish his brand and cheat some right-wingers out of money, landed him in the White House, where he's swiftly moving to dismantle democracy and line his pockets even faster. Kobach's town-by-town strategy helped stir up racism and hysteria about immigration, which no doubt helped contribute to the larger rise in white supremacist ideology and the election of Trump.

None of this means, necessarily, that the con men in question are faking their beliefs. Kobach and Trump's racism, it would seem, is sincerely held. Grant Young, the former mayor of a town targeted by Kobach, told ProPublica and the Kansas City Star he believes Kobach tells himself, "[M]aybe I can advance my political position, my political thinking and maybe make some money at the same time." With marks so willing, and so fueled by unswerving belief, it's easy for grifters to convince themselves they're in the right.

How the GOP turned into "Troll Nation"

Salon's Amanda Marcotte on the conservative movement's descent into free-floating bigotry and cruelty.