After I survived cancer, I celebrated with a birthday cake

I made this cake to celebrate my 34th birthday 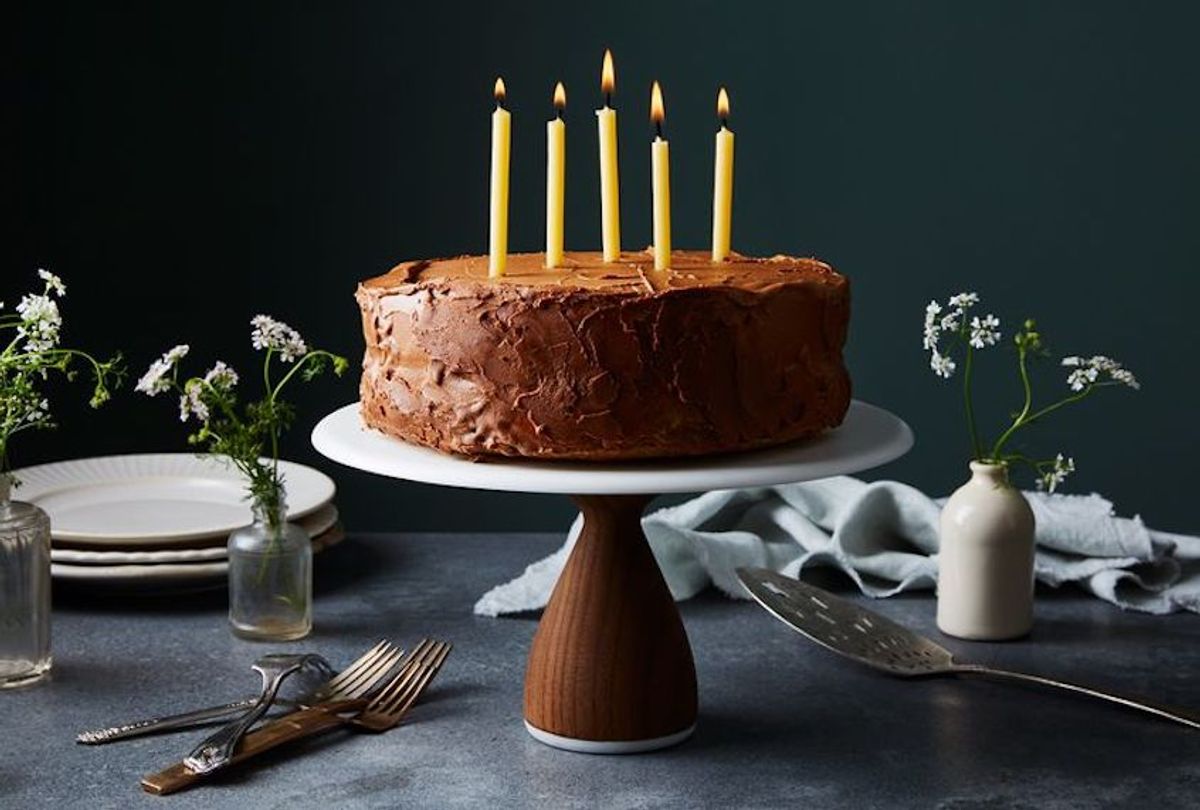 The birthdays in my house are three-day events. My two sons have birthdays one day apart, one of whom shares it with my husband, their father. (That’s right, three of the four birthdays in our house are back-to-back.) Every person has their own cake, the flavors catered to their preference. Around mid-September, I disappear into a cloud of flour for a few days.

Luckily, I think of baking cakes — especially ones meant to celebrate birthdays — as an honor. They inspire gathering together out of love to eat something made with love. They display the power of a person’s life through community and celebrate the precious gift of age.

I think about birthdays a lot now, but not just because of the cake. About a year ago, I was diagnosed with the most aggressive form of brain cancer — a glioblastoma multiforme — and was given a year to live. It was the biggest bully on the brain cancer block, the end of the line of the tumors that my consulting surgeon told me not to scroll to when looking at the ABTA website. There I was, diagnosed with the “impossible.”

My case has been very unusual from the start, like the fact that it was discovered just a few weeks before my 33rd birthday, about 30 years early according to the statistics. When the doctors first looked at the MRI that showed the tangerine-sized intruder, based on where it had grown, they were surprised I could walk — let alone cook, drive, or write my third cookbook, all of which I had done during its growth—and feared that I would lose any variety of motor skills after its removal. I never did, thankfully, and went home straight from the ICU after just an overnight stay in the hospital.

Of course, I cried at first. A lot. I spent a few days in bed writing goodbye letters, feeling guilty when I heard my boys’ footsteps outside my door, aching to be with them as they grew and expecting I wouldn’t. The younger of my sons wouldn’t remember me if I died when they warned I might, and the older was constantly bargaining for wishes in unexpected places with an unspoken power. He would blow apart every dandelion he found, whisper to himself before breaking a wishbone. He didn’t have to tell me what he wished for.

The foods I chose to cook for myself were entirely different than those in my regular rotation. A month after my diagnosis, I decided to opt for a new, anti-inflammatory way of eating that cut out great sources of comfort (and years of my work), like chocolate, gluten, and sugar. I had been examining every possible lifestyle choice for opportunities to live more gently, to give my body all the strength it could possibly wield behind the tools my doctors were giving me. It felt like a starting point to figure out how to fight my cancer.

In addition to changing my diet, I decided to engage the “emergency plan” that my agent and I had discussed, and handed off the finishing touches of my third book — my dream project, one I had traveled to Spain and left my younger son as a baby to write — to a ghost writer, to a stranger. It’s a decision I still wrestle with today, despite knowing that it was one of the ways I was able to create space in my life for healing. It comes out in September and I look forward to seeing it, as hopefully you will. It’s the last memento of what now feels like a former life.

I was thrown into an aggressive treatment plan of radiation and chemotherapy soon after, but never found the symptoms the doctors cautioned me about. I was lucky enough to feel well—so much better than before my surgery, in fact — and my steady activity of cooking and writing helped me to recognize myself in this new brain. I honestly didn’t feel like I was dying until I looked at the faces of my friends, and they cried as I smiled and hugged them hello. I would think, “I’m a baker; I give cookies to people to make them happy.” Having friends cry at you is the inverse of whatever one would call that "baker’s instinct." It hollowed out a part of me that I had to fill with hope I had constructed for myself, since none of my doctors were able to lend me any at the time.

Just two days after finding the tumor, I started a CaringBridge blog to disperse my news to far-flung family and friends. Also, so I didn’t have to spend my energy and time retelling the worst parts of my days when I wanted instead to be reading books to my kids. As I wrote, I imagined pulling the posts together for a book that I would leave my boys, a place to leave my voice for them in case I wasn’t around. Some people thought that writing a memoir was defeatist or pessimistic — it wasn’t for me. It was being a mom, planning for the worst and being realistic about what my circumstances were and hoping that my plans would be sufficient to care for my boys as they grew. It was creating beauty and love through words. It made me immortal in a way — here, for the first time, was a place untouchable by cancer, one that echoed the kind of empowerment I was finding in the kitchen. The comforts of cooking were so similar to writing: Stringing together a sentence, a paragraph, a great story, was like the layering of ingredients, both creations within my control when so little was.

I also baked as a form of meditation, like the yoga I found myself in three times a week. I’m an instinctual baker, recognizing the feel of a batter or the crumble of a dough, which is helpful because I had to befriend an entirely new pantry of ingredients that defied my classic culinary training. I went to work on developing a cake recipe that I hoped to use for my next birthday, as if I could create hope with my hands. Baking is proof that the combination of disparate things, when working together in the right amounts, make something altogether new. I have come to think of the concept of health in regard to lifestyle somewhat the same way.

I liked the idea of fighting cancer through baking, of feeling like a warrior wrapped in my dad’s old apron. They are so diametrically opposed: Cancer is enigmatic, unpredictable, and evokes fear with the mention of its name. It’s isolation and death.

But baking is love. Done well, baking is effort and care that manifests into the creation of edible beauty. It’s community and the celebration of life. Pairing the two feels like a quintessential battle between good versus evil, but one that ends in crumbs rather than surgery.

Baking a birthday cake for myself was incredibly empowering. It held the possibility of celebrating another year, one I wasn’t supposed to have. It held honesty for what I’d been through, lacking chocolate, but an acceptance for what is, through the consolation of carob. It held my creativity and resilience, making a thing that resembles cakes I’d eaten my whole life from ingredients I had only just met. The elements surrounding the cake, however, were the ones that felt most powerful: my family and the life I live with them every day I am able. I’m humbled by the very idea of making this cake again.

Today, I live with clean scans in the time frame I was told would be my end. I made this cake to celebrate my 34th birthday. In this uncharted territory beyond statistics, the shape of my new, healthy life emerges, and I cook and bake to celebrate all of it. I’ve returned to my food blog after about eight years of its dormancy. I once used that space years ago to find my voice as a cook and writer, and return to it now for the same reasons, my inspiration reborn through new ingredients and challenges. It’s where I celebrate the foods I eat rather than apologize for what they replace, which had been my deepest fear as a food writer facing the handicap of a restricted diet. Writing there helps me feel less like a musician with hearing loss, and more like one who is just finding a new way to play her favorite songs.

Baking and dancing around in the kitchen last year, as it turned out, gave me more than recipes — it gave me life. My doctors speak in years now rather than months. On my last birthday, my youngest son sat in my lap to help with my candles and my oldest over my shoulder, all of us perched in front of a cake I made with love for myself, full of hope and gratitude. Our wishes were the same, as we watched the tendrils of smoke twist from the charred wick, granted in that very moment and all the ones since.

For the cake
Room temperature butter or vegetable shortening, for greasing pans