How we talk about Iran matters — and not just Trump's "BE CAUTIOUS!" tweets

There's an undeniable and horrifying human cost to military conflicts, as seen in Yemen and Syria 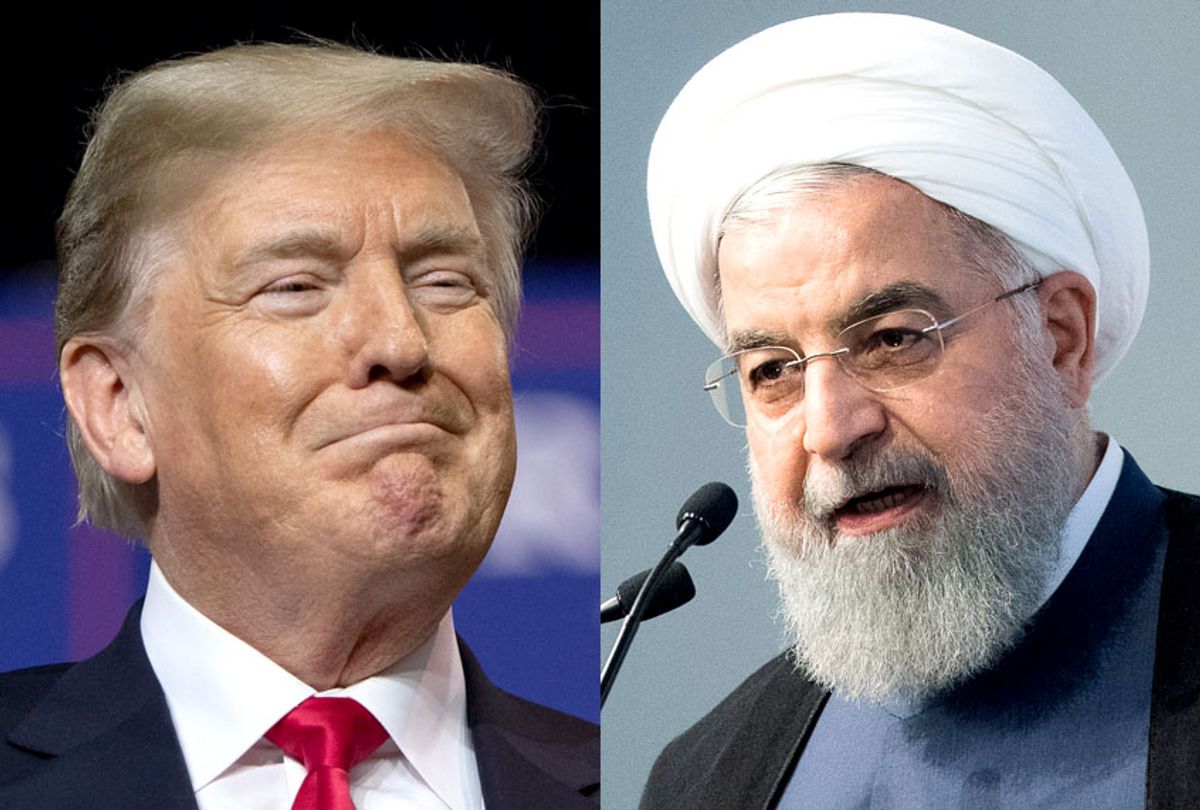 We should be used to this by now. Wake up, check the news, notice that President Trump has insulted yet another sovereign nation, and then wait for the news media to have a field day with it. But recent events have surpassed all expectations of a leader who regularly tweets threats at foreign leaders in all caps, when Trump took to Twitter to threaten President Hassan Rouhani of Iran:

To Iranian President Rouhani: NEVER, EVER THREATEN THE UNITED STATES AGAIN OR YOU WILL SUFFER CONSEQUENCES THE LIKES OF WHICH FEW THROUGHOUT HISTORY HAVE EVER SUFFERED BEFORE. WE ARE NO LONGER A COUNTRY THAT WILL STAND FOR YOUR DEMENTED WORDS OF VIOLENCE & DEATH. BE CAUTIOUS!

There is something deeply ironic and more than a little disturbing in Trump’s final warning to “Be cautious!” given the fact that being cautious is simply not something he ever does.

But there’s more to it — we have to take note of the way that Trump rhetoric itself becomes the story rather than the actual actions of his administration. All signs suggest that his administration is poised to increase conflict and confrontation with Iran and possibly work to topple the government. As Roxane Farmanfarmaian, who directs the University of Cambridge – Al Jazeera Center for Studies media project, writes, “Trump's new flock of advisers are long-term anti-Iran hawks, and his regional allies Saudi Arabia and Israel have themselves intensified threats to destabilise Iran from within, so as to hasten regime change.”

Farmanfarmaian outlines why a full-blown war with Iran is unlikely: Trump’s weak ties to Europe, his strong ties to Russia (who does not want war to its south) and Trump’s dependence on Russia in Syria. But as she explains, Trump’s aggressive stance on Iran is cause for real concern, most especially because “the region's razor-edge politics are as mercurial as Trump's own.”

One of the reasons why the region is so mercurial, argues journalist and author Vijay Prashad, is the high concentration of military weapons. As he puts it in a recent column on the astonishing increase in weapons sales under the Trump administration, “Half of all arms sales are to the Middle East. It is well-worth considering that the arms sales, rather than fundamentalism, fuel the conflicts in the Middle East.”

While the Unites States has curtailed its sale of weapons to Iran, having been their top provider from 1950-1970, it does provide weapons to Iran’s adversaries, especially Saudi Arabia, which is the largest purchaser of U.S. weapons. In May 2017, Trump posed for a photo op during his visit to Saudi Arabia holding a glowing orb. He would leave the Kingdom having put in place arms sales deals worth $110 billion. More recently, in March the U.S. government approved a $1 billion arms deal with Saudi Arabia.

As Prashad notes, there is a direct human cost to these deals, one which is increasingly affecting civilian populations. He focuses on the war in Yemen where Saudi Arabia and the United Arab Emirates have created what the UN calls the world’s “worst humanitarian crisis.” Prashad notes that 75 percent of the country’s population — around 22 million people — are in terrible straits, with hunger and disease rampant. Half of the population — over 11 million — are children. A child dies in Yemen every 10 minutes.

That fact simply doesn’t seem to make its way into the top news stories or topics of debate in the U.S. press. While the news media covers the latest Trump bluster or idiotic tweet, they miss the fact that under his administration civilian deaths in the Middle East have skyrocketed.

In The Washington Post, Margaret Sullivan reports that 2017 was the deadliest year yet for civilian casualties in Iraq and Syria — a 200 percent increase over the previous year that doesn’t even take into account countries like Afghanistan and Yemen.

One reason for the rise in civilian deaths is the increase in the use of drone airstrikes, a topic taken up by Isobel Yeung in a recent Vice on HBO special entitled “After the Fall.” Yeung shows that, despite the fact that the United States continues to claim that its airstrikes in Raqqa, Syria were a success, the reality on the ground is far different.

Her report begins by following a man entering homes to look for mines because the city is 80 percent uninhabitable. What’s astonishing is that he is not part of an NGO or state-run operation; he is just an average citizen attempting to help make it possible for families to return to their homes.

She follows mothers looking for lost sons, documents unidentified bodies uncovered in mass graves and speaks with families dealing with destroyed homes. One of her interviewees is adamant that those who dropped the bombs on her city must repair the damage. “We want those who destroyed our homes to rebuild them,” the mother says. Yet there is no sign whatsoever of any U.S.-backed aid coming her way.

But one of the most telling moments is a clip of Thomas Veale, Public Affairs Director for Operation Inherent Resolve, explaining that it will never be possible to account for the total number of Syrian civilian deaths due to the U.S. airstrikes. “No one will ever know” how many civilians died in the bombings, he states.

While there are vast differences between the conflicts in Yemen and Syria, there is a through line to these stories — the arms race, the emphasis on dehumanizing drone strikes, the rising toll on civilian life and a western public largely unaware of or unconcerned by those deaths. There is nothing inherently new to a story about war profiteering and indifference to its human cost, but the magnitude of both the profit and the loss has, indeed, changed.

This brings us back to Iran, who announced plans for a military exercise in the Persian Gulf close to the Strait of Hormuz earlier this week. That announcement led to further speculation about a military conflict with the United States.

If there was a military conflict between the United States and Iran, we can be certain of two things: It will involve airstrikes and substantial civilian deaths. Yet most mainstream news media coverage, especially on cable news, of Trump on Iran has avoided dealing with the potential risks of a military conflict.

In one especially tone-deaf segment, Fareed Zakaria hosted a panel for GPS on CNN where he interviewed CIA officer Reuel Marc Gerecht and Iran expert Trita Parsi on whether the Trump administration's Iran policies should effect regime change.

As political comedian and activist Lee Camp noted in a tweet after the panel aired, “CNN just hosted a panel on whether the US should topple Iran & what regime should replace it. Every segment like this presupposes it’s ok & right for the US to destroy other countries & millions of lives at our whim.”

This is troubling not only because of the hubris of American Exceptionalism; it demonstrates a complete failure to recognize that we operate in a world with consequences, human ones, to armchair conversations about the pros and cons of destabilizing a regime.

Zakaria and his fellow panelists may be able to ignore the human side to this debate, but not so with other potential viewers. Zakaria, like so many others in the pundit class, forgets that his show can be seen anywhere and his audience is far wider than those counted by Nielsen. We also know that ISIS has learned how to weaponize these exact types of clips, inserting them in their own media in order to underscore the fact that the West has no respect for those who practice Islam.

As a case in point, Yeung interviews two detained ISIS members, half of the cell known as “The Beatles,” imprisoned in Northern Syria. Unsurprisingly they suggest that ISIS is not given a fair shake by the Western media but the really revealing moment takes place when Yueng asks them if the images of the U.S. airstrikes on Raqqa helped recruit for ISIS. They both immediately nod their heads. Of course, they claim, those images of bombs dropping, buildings decimated, and families shattered helped their cause. How could they not?

Imagine what panels like Zakaria’s might do for their cause. This is not to say that fear of ISIS should lead us to self-censor and control our conversations. It is to remind our politicians and pundits that their words resonate in a larger context. It often seems that commentators like Zakaria forget that debates about what the United States should or shouldn’t do in a nation can be watched by the very same people living in those countries.

So it isn’t just Trump’s all caps tweets that create the dangerous rhetoric we need to watch as things escalate with Iran. We should also be wary of cold, calculating discussions about overthrowing sovereign regimes. Even more importantly, we should be cautious of how this sort of rhetoric often serves as a cover for (or even a distraction from) aggressive military actions and their devastating consequences.