CBS' Kelly Kahl affirmed the network's commitment to an "inclusive, and safe workplace" at a TCA press tour event 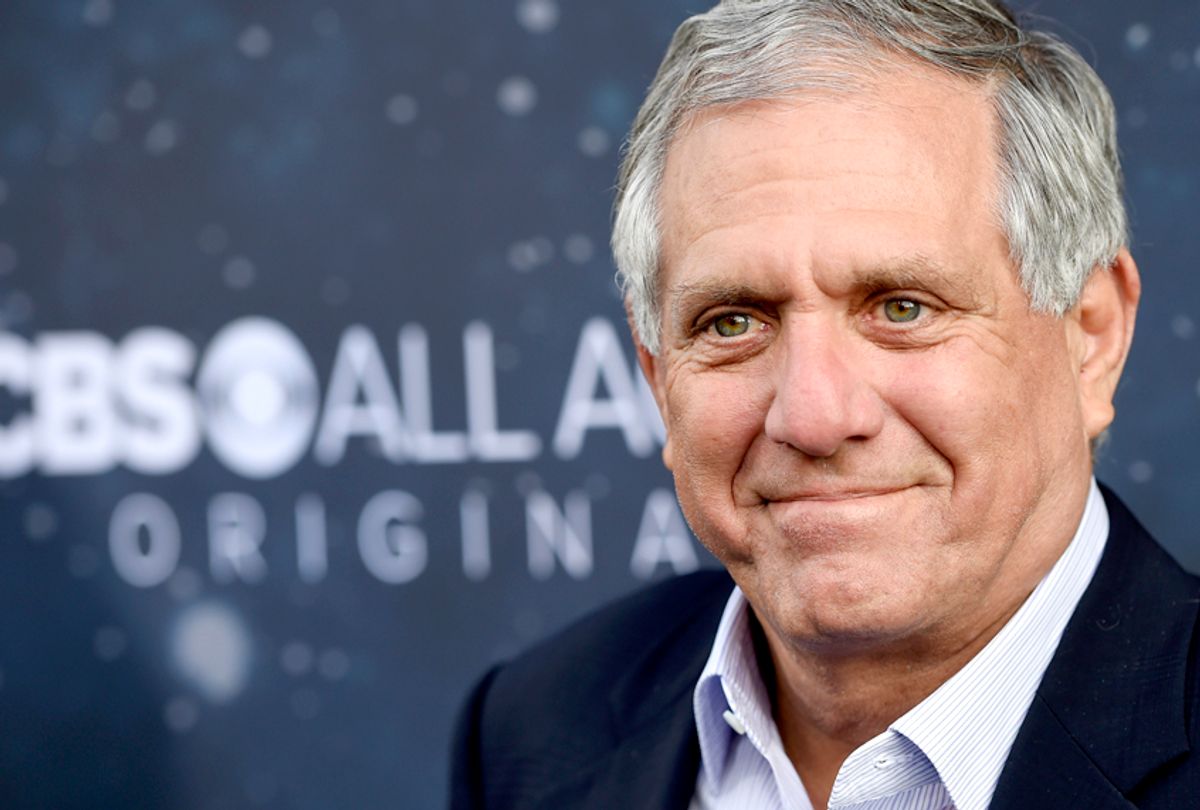 On Sunday morning CBS's president of entertainment Kelly Kahl stood before journalists in a chilly ballroom inside the Beverly Hilton, located within the heart of Beverly Hills. The entertainment industry likes to sell this zip code as a place where the sun always shines and everything glitters. That’s how the weather is portrayed, anyway.

The human drama onstage is very different situation. Entire films and TV series are predicated upon the tendency of influential people using power and wealth to camouflage wrongdoing.  Such was the case on this day, with this event.

Inside the hotel Kahl told reporters, “I’ve had many female colleagues come to me this week who have been saddened by what they’ve read about our company. They said it does not represent their experience at CBS.”

Outside was parked a digital billboard truck hired by the feminist advocacy group UltraViolet urging CBS to fire its president and CEO Les Moonves. It read, “We believe the women sexually assaulted and harassed by Les Moonves. Why doesn’t CBS? FIRE MOONVES NOW.”

CBS has a longstanding reputation of being the top network on television, and until recently, Moonves’ reputation as programmer was seen as “sterling,” to use a term employed by media analyst Brian Stelter.

Ronan Farrow’s extensively reported July 27 article in the New Yorker changed that. In his story, six women — the most famous being actress lleana Douglas — went on the record to describe being forcibly touched or kissed during business meetings with Moonves that took place between the 1980s and the late 2000s.

Yet for a variety of reasons, CBS is home to a culture that prides itself in being a place where employees stay for a very long time. When Kahl told reporters that Moonves is a mentor who put him in the job he has now, he’s referring to a 28-year relationship that began when Kahl served as Moonves’ research intern at Lorimar Television.

Even so, not all of CBS’ employees are as demonstrably in Moonves’ corner.

Stephen Colbert, host of “The Late Show,” stated on his July 30 program, “Everyone believes in accountability until it's their guy. And make no mistake, Les Moonves is my guy. . .But accountability is meaningless unless it's for everybody, whether it's the leader of a network or the leader of the free world.”

While producer Chuck Lorre declined to comment specifically on the Moonves allegations, during his appearance at TCA the maker of “Mom” and “The Big Bang Theory” observed, “I do think it’s important to have a safe work environment… Why would anyone want to go to work in an environment that’s not nurturing?"

“You certainly can’t do comedy if you’re frightened,” he added. “You certainly can’t do good work if the environment doesn’t support you and look after your best interests, and I think that should go without saying. I can’t believe we can actually have that conversation. That should just go without saying. That’s just common courtesy and decency to take care of each other.”

Meredith Vieira, who appeared at TCA in support of PBS’ “The Great American Read,” said she hadn’t read the New Yorker Piece. But she went on to say, “People know my story from CBS, my time at ‘60 Minutes.’ I think there was sexism for sure. I never was harassed per se."

“But I think it was difficult during the time when I was there, particularly at that show, to navigate your way as a woman who wasn’t following the party line,” she observed. “But I personally never experienced anything bordering on harassment anywhere that I’ve been. Maybe they’re scared of me. I don’t know.”

Even “Murphy Brown” creator Diane English told reporters covering the revival’s TCA panel, “We support the investigation fully. None of us have had any negative experience in that regard at CBS, and I go back to the Bill Paley days…so I have never experienced any kind of sexual misconduct personally or misogyny, and as far as I know, no one on my crew has.”

English added that she and he writers developed a "Murphy Brown" episode about the #MeToo Movement "many months ago, and that will be our fourth episode."

In addition to telling reporters that CBS is “committed to a collaborative, inclusive, and safe workplace,” Kahl said, ”We’re not saying we’re perfect. No large company is. And there’s always room for improvement, but a lot of us have been here a long time precisely because CBS Entertainment is such a fulfilling place to work.”

With his boss in the midst of an investigation, Kahl’s ability to elaborate on the matter or provide additional insight beyond the confines of advice from CBS’ public relations staff or legal counsel is understandably limited. In fact, for more than a week the journalists assembled in Los Angeles to cover the event wondered whether CBS would show at all, let alone host an executive session.

ABC and NBC are also hosting TCA days devoted to showcasing their new programs, but as of Sunday evening neither network’s top executives have planned to appear for press conferences. ABC is still dealing with the fallout created by its “Roseanne” controversy, while NBC had its own #MeToo scandal in the form of Matt Lauer. But even as the situation surrounding CBS’ top executive takes on new dimensions, Kahl stated that he wanted to face journalists.

“There are literally thousands of talented producers, writers, actors, and crews, not to mention all the people at CBS who have been preparing for months to launch the fall season,” he said. “They’ve worked incredibly hard, and we think they deserve our best efforts to share all the new shows with all of you.”

Kahl also stated the obvious, which is that the past week at CBS was tough. That’s putting it mildly.

On Wednesday CBS's Board announced it had hired a pair of law firms, Covington & Burling and Debevoise & Plimpton, to investigate the allegations concerning Moonves. Then on Sunday a CBS spokesperson also told Buzzfeed that "60 Minutes" Executive Producer Jeff Fager, also accused of inappropriate behavior in Farrow’s article, would not be at work on Monday, as an investigation into alleged inappropriate behavior continues.

“Having heard the investigation will be wrapping up soon, Jeff has decided to stay on vacation," a CBS spokesperson told reporter Talal Ansari. Despite all this, when asked whether CBS needed to undergo change so that employees could feel safe, Kahl answered, “I believe we take workplace safety very seriously. If you look up and down the halls at CBS, you will find a very safe environment."

"Any time any allegation comes up on any of our shows, it’s investigated immediately,” he said.  “There’s no wiggle room there. Any complaint, we have a procedure we follow. It goes to HR and sometimes to outside counsel, if necessary. So while maybe we are not perfect, we take everything seriously. At CBS or any other place, any other workplace, on the set or in the halls, everybody deserves a safe workplace.”

Two nagging issues stand out in these statements, and they can be said of any company with a large number of employees and a multi-layered corporate structure.

The first is what seems to be an acknowledgement that the same organization can be seen by some people as a supportive, nurturing place to work, and by others as an abusive, unsafe and misogynistic environment whose managers know they’ll be protected by people at the highest levels, and who take advantage of that knowledge to visit all manner of indignities upon their subordinates.

The second, which is by no means unique to CBS, is an inability to face the fact that within many corporations, human resources departments are seen, at best, as completely ineffectual or a department whose purpose is to prevent a company from being sued as opposed to a means of protecting its employees.

At their worst, a company’s H.R. department can be seen as a tool to root out people who might be seen as troublesome or disloyal, a surefire path to termination. This was alleged to be the experience by some employees who reported “NCIS: New Orleans” showrunner Brad Kern to CBS’s H.R. department twice in one year with allegations of sexual misconduct and abuse, only to have those investigations absolve Kern of wrongdoing. This allowed him to return to work and, according to sources quoted in the original Variety report, fire a nursing mother who was the subject of one of those reports.

Over at NBC, an investigation absolved managers and H.R. representatives of wrongdoing in handling the sexual assault and misconduct cases against Matt Lauer, terminated from the company in November 2017.  “Current and former members of NBC News and ‘Today’ Show leadership, as well as News HR, stated that they had never received a complaint about inappropriate workplace behavior by Lauer, and we did not find any contrary evidence,” according to an internal report made public in May.” But in an internal memo to employees cited in Variety, News Chairman Andrew Lack observed that while he remains proud of the work his organization has done,

...stepping back from the investigation – that history also includes a time when people were not comfortable coming forward to voice complaints about repugnant behavior. That is not acceptable. We cannot change the past. What we can do is learn from it, and try to make it right. We have already begun to turn the page to establish a safer and more respectful environment. That requires strong, specific steps in a sustained manner to transform the culture.

In answering journalists’ questions Kahl continued to put his faith in CBS human resources department. He stated that if a concern were brought to him, “I would try to make them comfortable to speak with HR and hope that HR would address their concerns, which I’m confident they would.” Previous cases indicate that his confidence may be misplaced.

But perhaps one of the reasons for the disconnect is the fact that Kahl and other Moonves loyalists may not be able to fathom that within a system that has promoted them and elevated their careers, something might be broken. Even English seems able to conceive this is possible. “I don’t think there’s a woman out here, you know, who hasn’t had some experience with misogyny or misconduct,” she said about her show’s planned #MeToo episode. “It’s a powerful movement.” Whether that power shifts the culture at CBS remains to be proven.

Why Katie Couric is rethinking the past

The TV journalist is starting a conversation about gender inequality in the workplace.