Child separation crisis background: Who caused the misery south of the border?

An in-depth look at what happened in Guatemala, where a trail of bodies has led back to the U.S. 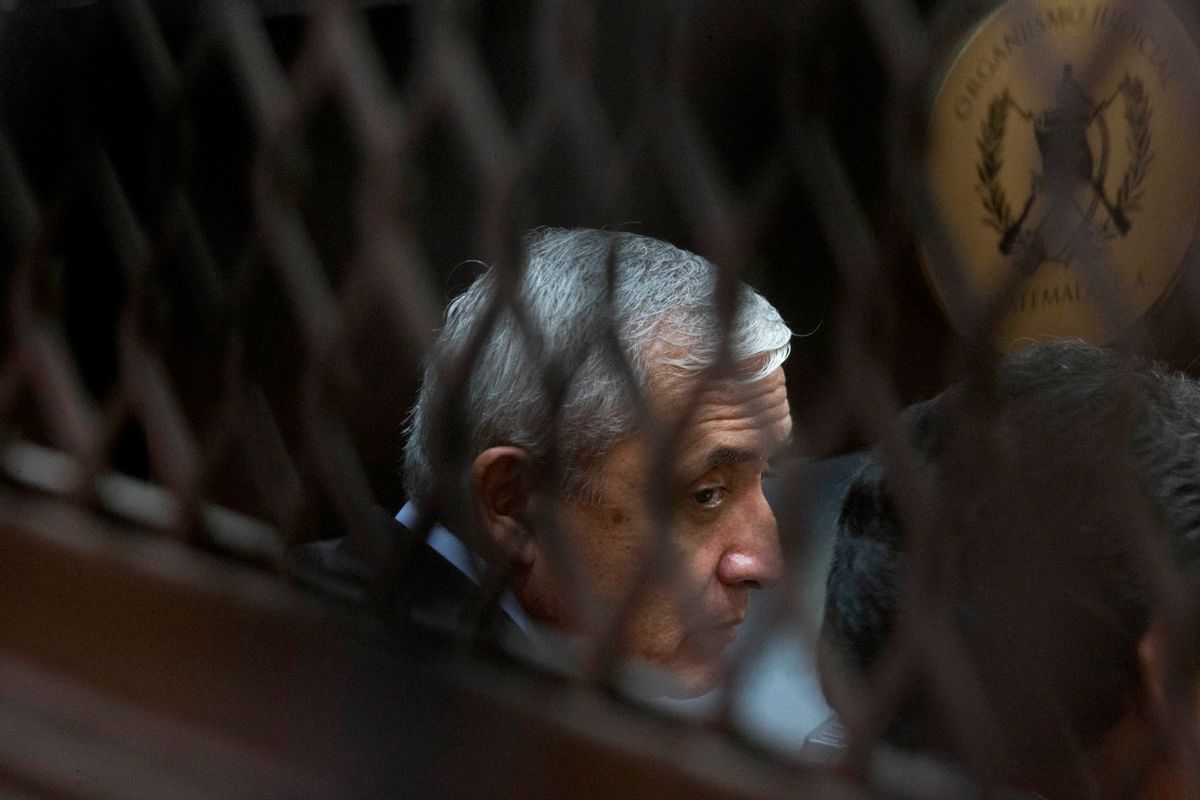 FILE - In this Sept. 8, 2015 file photo, Guatemala's former President Otto Perez Molina, photographed through a window, sits in court for a third hearing on corruption allegations that led him to resign, in Guatemala City. (AP Photo/Esteban Felix, File))
--

In our interconnected world, nothing happens in a vacuum — certainly not in the backyard of the United States. So while the eyes of the world are on the Trump administration’s inhumane policies regarding migrants and their children, it is worth taking a step back to figure out why so many people from Central American countries are risking their lives to seek refuge and a better future in the US.

As he made clear from the moment he announced his run for the presidency, Donald Trump would have Americans believe that these migrants are a bunch of criminals and only a wall would keep them out. That played so well with GOP primary voters afraid of “the other” that it helped earn Trump the Republican nomination and eventually swept him into office. The president said as much this week in a speech to a business group.

“Remember I made that speech and I was badly criticized?” Trump said. “‘Oh it’s so terrible, what he said.’ Turned out I was 100 percent right. That’s why I got elected.”

To the president and many Americans, “securing the border” against migrants is a national security issue and helps keep drugs out. That is why it is particularly ironic that other US actions in the name of national security destabilized much of Central America and also helped fuel the drug trade.

For decades, the United States has helped train and prop up brutal right-wing dictators in the region that are friendly to US interests, which in many cases means the interest of US businesses — all at the expense of local democracy. The means for achieving that have been both covert and overt.

And the effects are still being felt today, which is why thousands of people are making that treacherous track to escape from the “bad hombres” that the US helped create.

To gain a better understanding of the big picture, take a look at this WhoWhatWhy article, originally published October 2015, that takes an in-depth look at what happened in Guatemala, where a trail of bodies has led back to the US.

A friend of mine told me the following curious story. In the early 1990s, while taking a course at Harvard’s John F. Kennedy School of Government, he sat next to an ordinary-looking older man, a soft-spoken, pudgy fellow, who said he was from Guatemala. After a few weeks into the term, he came to class one day and found the man sitting alone, far from the other students, who seemed to be avoiding him.

Another student explained to my friend who the man was: Hector Gramajo, a former Guatemalan general and defense minister who was there on a Mason fellowship, studying for a degree in public administration. While he was Army Vice-Chief of Staff and Director of the Army General Staff, the Guatemalan army massacred more than 75,000 Mayans in what a United Nations Truth Commission later (1999) called genocide.

On graduation day, while in his academic gown, Gramajo was handed court papers informing him that he was being sued in the US by eight Guatemalans who together with family members had been abused by soldiers under his command. Later, the lawsuit was joined by one from Sister Dianna Ortiz, an American nun, who had been raped and tortured by Gramajo’s men.

He didn’t contest the lawsuit; he just ignored it, and left the US for Guatemala to run for — what else! — the presidency. Before he left, however, he gave a public lecture at Harvard and, blessed by that august institution, and with his prestigious degree in hand, went to his other alma mater, the School of the Americas (SOA), which some refer to as the “School of Assassins,” at Ft. Benning, where he gave the commencement address. (More on this “educational” organization below.)

In 1995, a federal judge in Boston awarded $47.5 million to the plaintiffs. Gramajo never paid. He was back in Guatemala, where, in 2004, in a fitting twist of fate, he was killed by a swarm of Africanized bees.

Joy erupted in the streets of Guatemala in early September, after months of demonstrations had forced the congress to strip presidential immunity from President Otto Perez Molina, who then resigned and was subsequently jailed on corruption charges.

The fraud, conspiracy, and bribery charges against Molina, 64, a former army general and intelligence chief, are dubbed “La Linea,” or “The Line,” because a network, or long line of government officials is involved. The case concerns bribes paid by businesses to customs officers and government officials in order to evade import duties. Molina is alleged to have profited handsomely, but he denies the charges. His former vice president, Roxanna Baldetti, was jailed on August 21st on similar charges.

The corruption charges were the result of an investigation conducted by the United Nations International Commission against Impunity in Guatemala (CICIG) in collaboration with the Guatemalan Justice Department.

The huge street demonstrations in Guatemala City and around the country, fueled by indignation at long-standing systemic corruption, put enormous pressure on the judiciary to finally arrest Molina. His September 3rd arrest brought optimism to a country sorely in need of some good news.

But then, three days later, a television comedian (shades of US election theatrics), Jimmy Morales — backed by military officers implicated in torture, assassinations, and massacres — won the first round of the presidential elections, despite widespread remonstrations to postpone an election considered rigged by corrupt oligarchs and drug lords.

The US mainstream media has reported the basics of these events. But, as usual, what they haven’t done is report on the deeper back story to all this, and how the US government is involved in nefarious ways that stretch back many years.

For example, the fact that Molina was trained at the SOA at Ft. Benning, GA, in torturous interrogation techniques, and is implicated in many killings, is never mentioned in the The New York Times story of his resignation, nor in any subsequent story, as of the date of this publication.

For a long time, the United States government has been deeply involved in the support and training of death squads, and corrupt military officers, not only in Guatemala, but throughout Latin America.

Corruption is child’s play compared with the massacres, acts of torture, assassinations, and disappearances that were carried out across Latin America by personnel trained and supported by the US. Carolyn Forche, an American poet and activist, got a rare, intimate glimpse of the kind of monster who was involved in these acts when, in 1978, she had dinner at the home of an unnamed Salvadoran colonel. This event inspired a prose poem — "The Colonel" — that you can listen to here. Below is an excerpt from it. It is not for the squeamish:

Broken bottles were embedded in the walls around the house to scoop the kneecaps from a man’s legs or cut his hands to lace. . . We had dinner, rack of lamb, good wine. . . I was asked how I enjoyed the country. . . There was some talk of how difficult it had become to govern. The parrot said hello on the terrace. The colonel told it to shut up, and pushed himself from the table. My friend said to me with his eyes: say nothing. The colonel returned with a sack used to bring groceries home. He spilled many human ears on the table. They were like dried peach halves. There is no other way to say this. He took one of them in his hands, shook it in our faces, dropped it into a water glass. It came alive there. I am tired of fooling around he said. As for the rights of anyone, tell your people they can go fuck themselves. He swept the ears to the floor with his arm and held the last of his wine in the air. Something for your poetry, no? he said. Some of the ears on the floor caught this scrap of his voice. Some of the ears on the floor were pressed to the ground. May 1978

Expertise in torture and murder

As for Molina — like the Salvadoran death squad leader of the period of Forche’s poem, Roberto D’Aubuisson, who ordered the assassination of Archbishop Oscar Romero, the defender of the poor — he, too, was trained by the US at the SOA.

This is where for more than half a century the US has trained Latin American and Caribbean military in the most efficient techniques for torturing and killing their own people. Trained by the US, these soldiers have returned to their countries where they have tortured and killed peasants, students, priests, nuns, opposition leaders, et al. by the thousands. Far too many Americans are blissfully unaware of what is done in their name. (In 2001, it was euphemistically renamed the Western Hemisphere Institute for Security Cooperation [WHINSEC] — pure Orwell.)

For years, Roy Bourgeois, a former US naval officer and Maryknoll priest, has led an effort to inform the American people of what is occurring at the SOA, and to have the US government shut it down.

At the website he founded, one can find extensive documentation on the people who have graduated from this “Institute” for lower learning, and on their murderous histories. In Guatemala alone, conservative estimates put the number at well above 200,000 killed. This is not simply Guatemalan history, but the secret history of the United States.

Despite its notorious and well-documented history, here is how the New York Times described the SOA on April 1, 1985:

“Col. Michael J. Sierra, the commandant of the school, said that later this year courses in medicine, engineering, psychological operations and maintenance would be offered for the first time as the curriculum goes beyond standard military operations.

“‘We have been been teaching military science,’ Colonel Sierra said. ‘Now we’ll start teaching courses that can contribute to national development. . . .’

“In many Latin American nations, military officers have been far more involved in political and economic development than have soldiers in the United States. . . .

Build ties between the United States and Latin America? They certainly have achieved that.

Molina is implicated in many massacres and murders while he was an army general and chief of military intelligence — and on the CIA payroll. One of his many victims was Efrain Bamaca Velasquez, known as “Everado,” who fought against the US-backed government that massacred hundreds of thousands of Guatemalans. Captured in 1992, he was tortured for years, then killed under Molina’s auspices. His wife, the Harvard-trained American Lawyer and activist Jennifer Harbury, has done much to publicize his case.

Other victims tied to Molina are Judge Edgar Ramiro Elias Ogaldez, and Bishop Juan Gerardi. See Francisco Goldman’s intriguing story on the Gerardi assassination. He reports that once the death squads and military killers were exposed by the UN for genocide and widespread assassinations, they mutated into the criminal mafia and drug cartels. In 2007 he published his authoritative book — "The Art of Political Murder" — on the Gerardi case.

Molina is currently being charged with corruption, not murder — at least not yet. As with the recent corruption charges, Molina denies all.