4 signs of a blue wave from Election Day: Republicans should be running scared

Red flags for the GOP: Republicans did not do very well during Tuesday's primaries 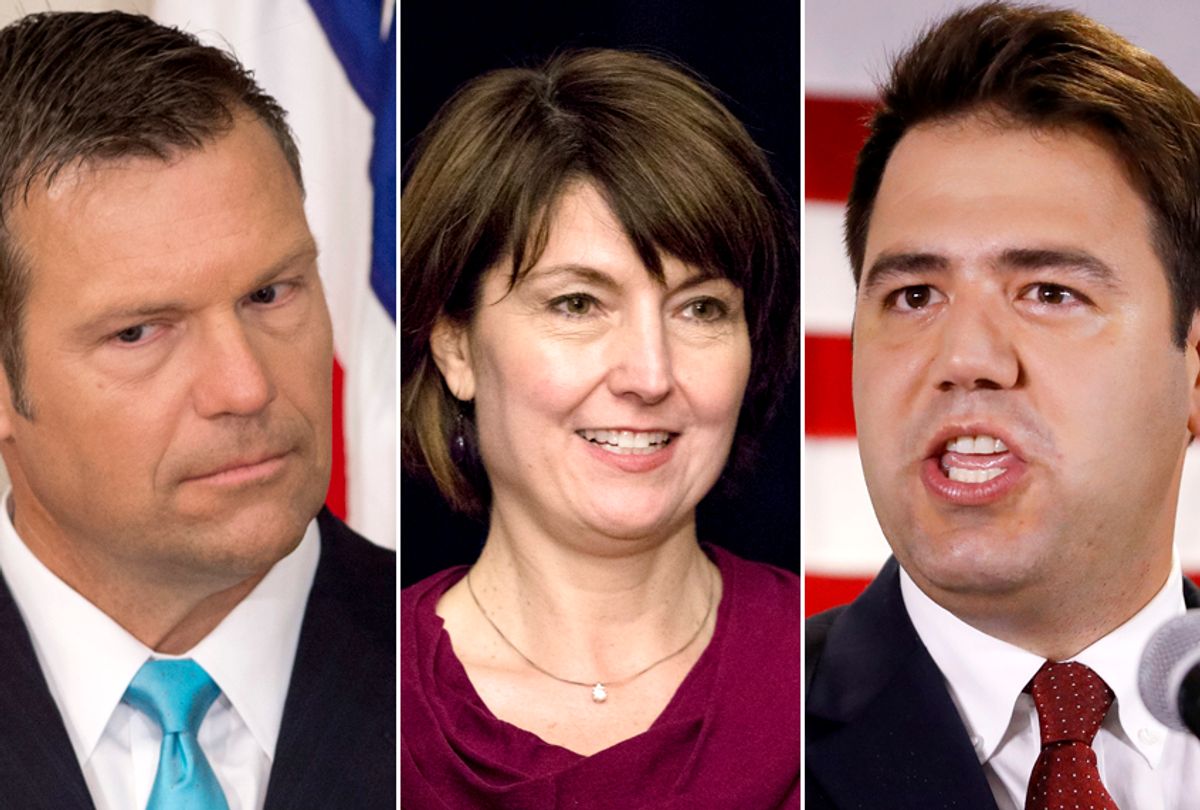 Still too close to call: Special election in Ohio's 12th district held by Republicans for 35 years

There has been a running theme since Trump took office: Democrats either win in areas of the country where they would traditionally have been expected to lose (see Doug Jones besting Roy Moore in the Alabama special election for the Senate, or Conor Lamb beating Rick Saccone in Pennsylvania's 18th congressional district) or, at the very least, coming close to doing so (see Jon Ossoff coming within less than 10,000 votes of beating Karen Handel in Georgia's 6th congressional district).

In Ohio's 12th congressional district, the Democratic nominee was Franklin County Recorder Danny O'Connor, who ran against a veteran Republican politician, State Senator Troy Balderson. Balderson has been endorsed by both Trump and his longtime Republican nemesis, Ohio Gov. John Kasich (for whom this district is his old political stomping ground); O'Connor, like Lamb before him in Pennsylvania, is running as a moderate, according to The Washington Post. Currently, Balderson has a slight lead over O'Connor, although not enough of one to make it safe to call the district for him. O'Connor has indicated his campaign will fight for a recount.

Yet it doesn't really matter. The 12th district is traditionally a solidly Republican area, one that a Democrat hasn't won in nearly forty years, one that the GOP should be able to count on as being firmly in their pocket. Hence this observation from the Post: "Democrats are prepared to announce victory either way. If they win a district this Republican, they’re looking at a landslide in November. If O’Connor comes close, Democrats will quickly remind us that five dozen seats are less Republican than the Ohio 12th."

Both candidates will face off again this November.

Kansas Secretary of State Kris Kobach has a unique relationship with Trump: He used to be the vice-chair of the president's commission on election integrity (which has been disbanded), is the source of many of Trump's discredited claims about voter fraud and has been repeatedly humiliated for claiming that voter fraud is a major problem when in fact it is not (the goal of the spurious voter fraud claims is to intimidate and otherwise suppress votes that might otherwise go to Democratic candidates). Yet despite the fact that Kobach has caused Trump nothing but public embarrassment, the president ignored the Republican Governors Association and endorsed Kobach in Kansas' GOP gubernatorial primary over his chief rival, incumbent Gov. Jeff Colyer.

Just to be clear: The RGA didn't ask Trump to endorse Colyer, but merely to stay out of the race. Had he done so, he wouldn't have put himself in the position in which he currently finds himself, with his ostensibly anti-establishment champion basically tied with an incumbent from his own party while a major part of the state (the highly populated Johnson County) has yet to have its voted counted. Now Trump is facing a lose-lose prospect: If Colyer bests Kobach, it will demonstrate that he is weaker among Republican base voters than he might otherwise like to believe; if Kobach bests Colyer, the Democrats will suddenly have a chance to reclaim the governorship in a state that would otherwise be considered safe for the GOP.

The 5th congressional district in Washington hasn't had a Democratic representative in more than 20 years. Its incumbent, Rep. Cathy McMorris Rodgers has been in office since 2005. Yet in the Tuesday primary — in Washington candidates from all parties run in a single primary, with the top two vote-getters competing against each other in the general election — Rodgers has a lead of just over 500 votes over the runner-up, Democratic candidate Lisa Brown, according to the Spokesman-Review. As with the race in Ohio's 12th district, the main takeaway here is that Republican candidates who might otherwise be able to take their victories for granted are struggling in the Trump era. This was reflected in how Brown spoke to her cheering crowd on election night, according to the Review:

Buoyed by the down-ticket performance of other Democrats, a beaming Brown took the stage before a crowd of 150-plus Democratic supporters at the Carpenters Hall in Spokane’s Logan neighborhood.

"What this vote means to me is that the incumbent has had her time," Brown told cheering supporters. "And after 14 years, that time is up."

Bob McCulloch, the seven-term prosecuting attorney for St. Louis County in Missouri, suffered a landslide defeat at the hands of Ferguson councilman Wesley Bell. McCulloch came under severe scrutiny for his handling of the Michael Brown shooting in 2014.

Meanwhile, a state referendum saw a blow for anti-union movements as a right-to-work law passed by the Republican-controlled state legislature was overturned by voters, according to CNN. The right-to-work laws would have made it illegal to require employees to join a union or pay fees to unions negotiating on their behalf, moves that have the effect of weakening labor unions where they are enacted.

Not all of the news was positive for Progressives

After Alexandria Ocasio-Cortez pulled off an upset victory over Rep. Joseph Crowley in New York's 14th congressional district, many members of the Bernie Sanders wing of the Democratic Party — that is, the wing which openly identifies as Democratic-Socialist — began talking about how this foreshadowed a lurch to the left. Tuesday's primaries, however, did not bear out that assertion.

The two main candidates who cast themselves as successors to Sanders and Ocasio-Cortez, gubernatorial candidate Abdul El-Sayed in Michigan and congressional candidate Cori Bush in Missouri, both suffered major defeats. El-Sayed lost to former Democratic state legislative leader Gretchen Whitmer, despite having both Sanders and Ocasio-Cortez campaign on his behalf. Similarly Bush lost to incumbent Rep. William Lacy Clay, despite receiving support from Ocasio-Cortez.

"Alexandria Ocasio-Cortez’s victory did not suddenly mean that every left-wing Democratic insurgent was going to win from here on out. Her victory was more exception than rule," Kyle Kondik, managing editor of Sabato’s Crystal Ball, told Salon by email. "Overall, Tuesday night’s results were suggestive of a pro-Democratic environment."