Beyond Lebron James and Don Lemon: What James Baldwin can teach us about Donald Trump's racism

Trump's racism is toxic but his base doesn't mind, because the GOP is America's largest white identity organization 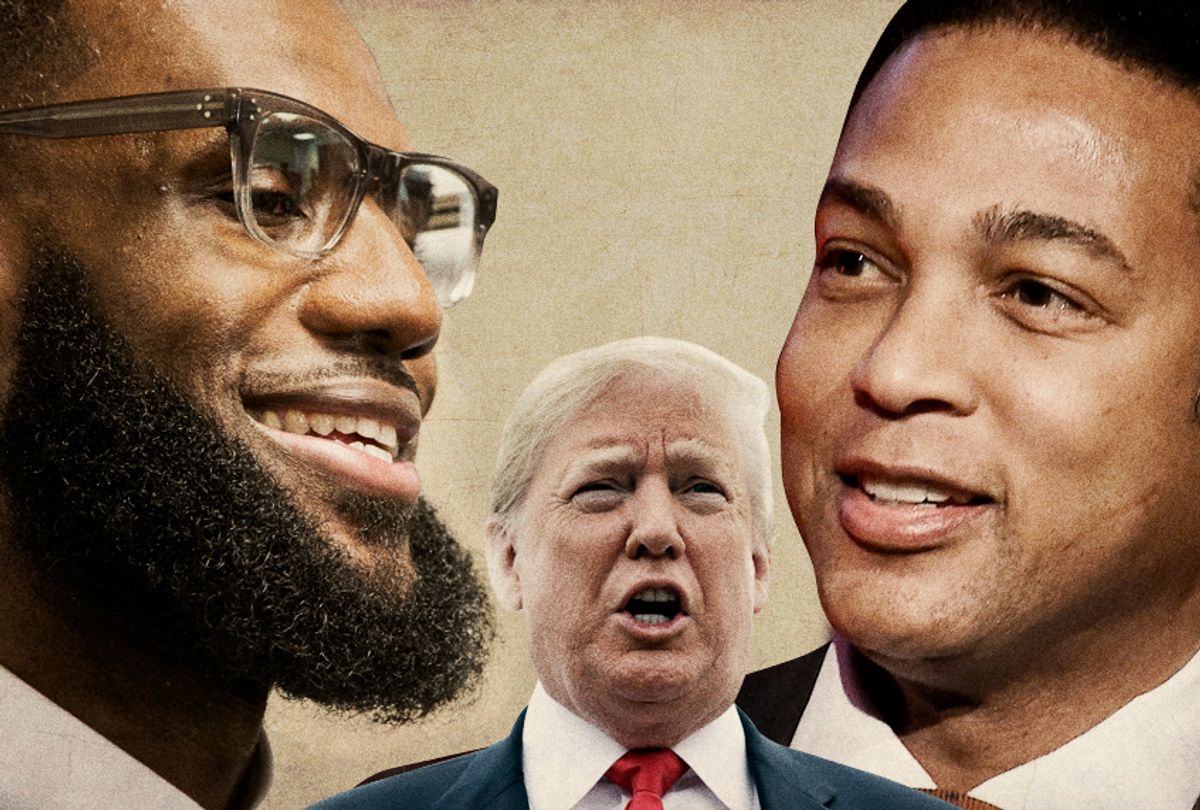 As black conservatives their primary purpose is to serve as professional "best black friends" for white racists. This is very lucrative work. Being a black conservative is a right-wing American version of the soft bigotry of low expectations.

With Donald Trump they are very busy in their role as human deflector shields: Trump claims to be "the least racist person" but also believes that neo Nazis and white supremacists can be "very fine people," puts nonwhite immigrants — including babies — in concentration camps, and with other Republicans is doing everything possible to take away voting and other civil rights from black and brown Americans. Quite logically, white supremacists such as Ku Klux Klan leader David Duke claim Donald Trump as a hero.

But woe be unto those black people who do not bow before Donald Trump in deference and obedience. For Trump, black people who are deemed to be "uppity" and "disrespectful" are "low I.Q." "sons of bitches" who are traitors that should be exiled from America perhaps back to "shithole" countries in Africa. And Trump possesses special rage towards black women who dare to defy him such as Representative Maxine Waters and sports journalist Jemele Hill.

Racism and sexism are intoxicants for Donald Trump; he cannot resist them. For example, Michael Harriot, who is a contributing writer at The Root, recently conducted an analysis of Trump's tweets which showed that 93.4 percent of his comments on Twitter about African-Americans are negative.

CNN commentator Don Lemon and NBA superstar athlete, businessman and philanthropist Lebron James are but the most recent targets of Trump's racism. In a public temper tantrum, last Friday, Donald Trump, the president of the United States, took to Twitter and said that:

"Lebron James was just interviewed by the dumbest man on television, Don Lemon. He made Lebron look smart, which isn't easy to do. I like Mike!"

Trump's behavior is disgusting on a number of levels.

Such behavior is beneath the Office of the President of the United States. The president should not use his or her uniquely powerful bully pulpit to attack private citizens. Donald Trump has repeatedly shown through his actions, words, and policies that he is a white supremacist and a racial authoritarian. His attacks on Lebron James and Don Lemon are but another data point which proves that fact.

There is also something very pathetic and funny about Donald Trump's attack on Lebron James and Don Lemon. Both men possess more intelligence, character, integrity, dignity, grace, and humanity than Donald Trump. Lebron James just spent millions of dollars to open a school whose goal is to serve at risk children in his hometown of Akron, Ohio.  Don Lemon supports various charities as well.

Lebron James is also a devoted father and husband.

Donald Trump possesses none of these character traits. He may have lots of money but possesses little if any grace, dignity, intelligence, or strength of character.  In Trump's racism and bigotry towards Lebron James and Don Lemon (and other black people he has disparaged) there is an element of envy and jealousy. This is a very important part of racism, one that is often overlooked.

It is perfectly timed that last week was James Baldwin's birthday and his words are so fitting for how they describe the insecurity, and yes jealousy, that afflicts Donald Trump and so many of his white racially resentful, if not outright, racist supporters.

In the "Fire Next Time", Baldwin observed:

The white man’s unadmitted—and apparently, to him, unspeakable—private fears and longings are projected onto the Negro. The only way he can be released from the Negro’s tyrannical power over him is to consent, in effect, to become black himself, to become part of that suffering and dancing country that he now watches wistfully from the heights of his lonely power.

These fears and longings also drive Donald Trump's deep insecurities and his fixation on Barack Obama, the latter being a man whose shadow of excellence and achievement Trump will never be able to escape or equal. This obsession is further revealed by Donald Trump's behavior on Twitter, where he has made at least three times as many comments about Barack Obama than his own family.

Donald Trump should be condemned for his most recent public racist fit.  But disgust and indignation at Trump's racism does nothing to neuter the political effectiveness of anti-black racism as a political strategy in America.

New research also reveals that white racism as manifest by hostility to the "Black Lives Matter" human rights movement motivated (what would become) Obama to Trump voters in the 2016 election.

Because white racists and others who are hostile to non-whites have found their natural home in today's Republican Party, Trump's racism does not hurt him politically among his base and others inclined to support him.

The Republican Party is America's largest white identity organization. The Democratic Party is a multiracial coalition. And for those few Republicans and other conservatives who do not possess racial hostility towards non-whites, Trump's racism and bigotry are not disqualifying factors in their support for him.

During the early months and first year of Trump's presidency there were pundits and other observers who were waiting to see if he would pivot away from the politics of racism and hatred and try to govern "from the center" and "for all Americans". It is now obvious that no such move will take place. Racism and white supremacy are an integral part of Donald Trump and the Republican Party's brand name. As such, those noxious and dangerous values will not be abandoned. If anything Donald Trump and the Republican Party will double and triple down on them.

Some five decades before America's first "White President" Donald Trump stole the White House from Hillary Clinton and the American people, James Baldwin offered another incisive and genius observation about the enduring problem of white on black and brown racism in America. In a 1969 New York Times editorial he explained:

They have been white, if I may so put it, too long; they have been married to the lie of white supremacy too long; the effect on their personalities, their lives, their grasp of reality, has been as devastating as the lava which so memorably immobilized the citizens of Pompeii. They are unable to conceive that their version of reality, which they want me to accept, is an insult to my history and a parody of theirs. . . . [I]f they think that things are more important than people . . . [l]et them be destroyed by their things.

If one is still seeking an answer for why Donald Trump holds such appeal for and power over his public all they need to do is read the above passage. Trumpism is pathological racism that has infected a man, his supporters, and many tens of millions of other Americans. You cannot cure a sick person or a sick people who do not want to get well.

In "Whose Streets?" documentary, watch Ferguson activists become the torchbearers of a new resistance