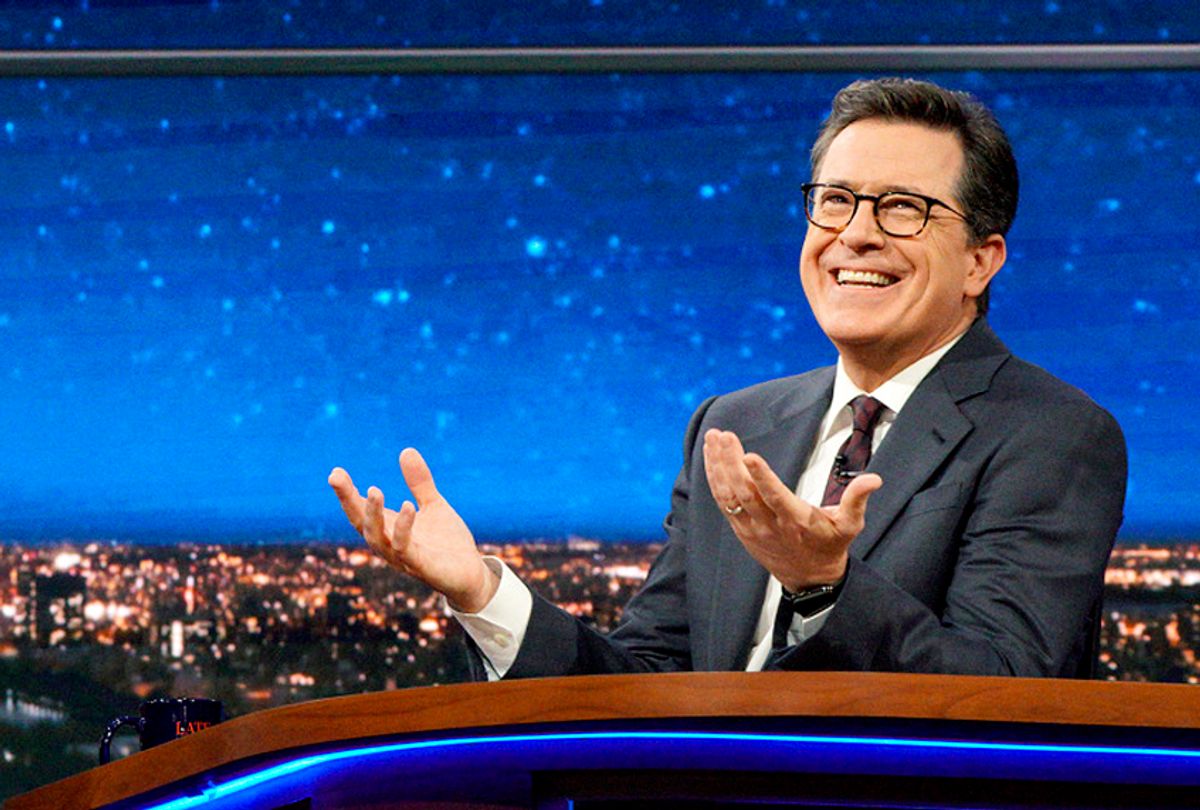 "Hello, citizens of Earth," Colbert began. "And if this is a rerun from two years from now, hello, to all our fighting boys in the Asteroid Belt. Go give the Astro-Kaiser hell! Because tonight there’s big news about Spaceeeee Forceeeee!"

"Longtime viewers of the Trump administration will remember that Space Force is the president’s boldest idea that he got from a Buzz Lightyear Happy Meal toy," he continued.

Colbert then played a clip from March where the president first spoke about the need to develop a war-ready space army, to match the Air Force and other military branches. "We'll call it the Space Force, think of that!" Trump said.

"Yes, think of that," Colbert replied. "But not too hard, because it's stupid. We already have NASA. We don't need Space Force. Please wait until NASA finds life before you try to kill it."

The late-night host didn't just make fun of Trump, but also Pence, who advocated for Space Force in a recent speech to the Defense Department.

"Today Space Force got a boost from Mike Pence," Colbert joked. "No surprise, Pence is a huge fan of space — it is the farthest you can get from being alone with a human woman." It was a quip about reports that said Pence won't dine alone with women, who aren't his wife.

Explaining the mission of Space Force, Pence said: "President Trump proclaimed that the United States stands, in his words, 'at the birth of a new millenium — ready to unlock the mysteries of space.'"

"What a stirring call to something we're already doing," Colbert said. "Yeah, since the 1960s. In fact, Pence's speech reminds me of JFK's immortal words." Airing voice-editing footage of former President John F. Kennedy, but in line with his famous cadence, he said: "We choose to go to the moon in this decade and do the other things, not because they are easy, but to distract from Robert Mueller, witch hunt!"

Returning to Pence's speech, he spoke of the need to create this Space Force. "This report calls for the creation of an elite group of joint war fighters, specializing in the domain of space, who will form the backbone of the nation's newest army service, Space Operations Force."

Colbert wasn't having it. "No, no, no, it's called Space Force! Not Space Operations Force," he said. "If you name a thing that dumb, you have to stick with it."

But the late-night host didn't spend the whole monologue mocking it. To help Space Force get off the ground, Colbert and "The Late Show" developed some possible logos for the "elite group of joint war fighters."

Providing three options, one insignia read: "Mars has cleaner water than Flint"; another said "In space no one can hear you collude"; and finally, "One small step for man. Really small hands for a man."

Is fascism having a resurgence?

A lesson on fascism, taught by Donald Trump.