The idea for the sixth branch of the armed forces, a "Space Force," came to Trump in an incoherent rant 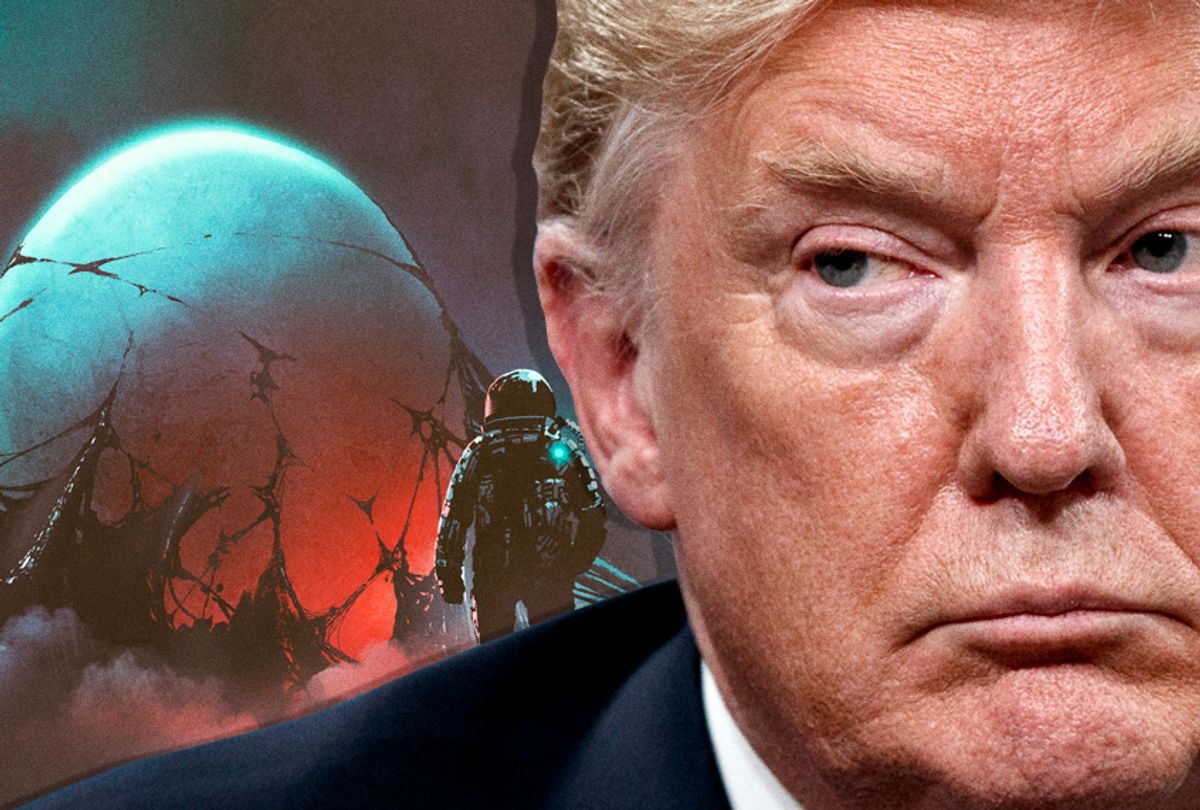 Just a few months ago, President Trump's casual references to creating a "Space Force" were, like covfefe, the wall, or many of his immediately-forgotten policy goals,  widely perceived as absurd. Yet it turns out he was serious — at least, about Space Force: President Donald Trump reiterated his plan to create a "space force" in an official announcement on Monday, when he publicly ordered the Department of Defense and Pentagon to “immediately begin the process necessary to establish a Space Force as a sixth branch of the armed forces.”

The remarks came at a meeting with the National Space Council, and signing of Space Policy Directive-3, which gives the U.S. power to manage space traffic and control the effects of debris in space. Space was on Trump's brain.

“We got it,” Dunford replied.

“Let’s go get it, General,” Trump replied. “But that’s the importance that we give it.  We’re going to have the Space Force.”

The Air Force was the last “new branch of the armed forces” to be created—and that was in 1947 after World War II, when Congress passed the National Security Act of 1947. Prior to becoming an official branch, it was known as the United States Army Air Forces.

“Does that verbal order translate into something more concrete?” Todd Harrison, director of the Aerospace Security Project and director of Defense Budget Analysis at the Center for Strategic and International Studies, said via The New York Times. “The most he can really ask them to do is start planning for it.”

Indeed, the execution details are unclear, but as Commander-in-Chief of the armed forces, Trump’s demand will likely be taken seriously. It is also likely to cause conflict within armed forces branches. High-ranking officials have reportedly been unsupportive of the possibility of the idea previously, citing that it would cause more separation in the Air Force.

In 2017, Defense Secretary Jim Mattis wrote in a letter to Rep. Michael Turner, R-Ohio, that he did not support the idea of a separate space branch.

"At a time when we are trying to integrate the department's joint warfighting functions, I do not wish to add a separate service that would likely present a narrower and even parochial approach to space operations," Mattis wrote. He added it would be "premature to add additional organizational and administrative tail to the department at a time I am trying to reduce overhead.”

Air Force Secretary Heather Wilson also told reporters when asked about the idea that she resisted it in 2017.

“The Pentagon is complicated enough,” Wilson told said. “We’re trying to simplify. So to make it more complex would add more boxes to the (organizational) chart and cost more money. And if I had more money, I would put it into lethality, not bureaucracy.”

Democratic Sen. Bill Nelson of Florida  tweeted his opposition to Monday’s announcement, echoing previous remarks that it would be a bad idea, and added that generals have opposed the idea when speaking with him, too.

“Now is NOT the time to rip the Air Force apart,” he tweeted. “Too many important missions at stake."

Trump’s directive today is not entirely a surprise. Two weeks ago, Politico reported that the Pentagon called on CNA Corp. to conduct a study to begin the proposal process for Congress on how the military could best support a space force. The study is expected to be complete by August 1, which will reportedly include language recommendations for legislation.

Yet most disconcerting, perhaps, is the incoherent way in which the idea of creating a new branch of the military came to the President.

"I said, 'maybe we need a new force, we'll call it the Space Force,' and I was not really serious. Then I said, 'what a great idea,' maybe we'll have to do that," he said in March.