In the "SpongeBob Squarepants" hell of Bikini Bottom, Squidward embodies our emotional and economic angst 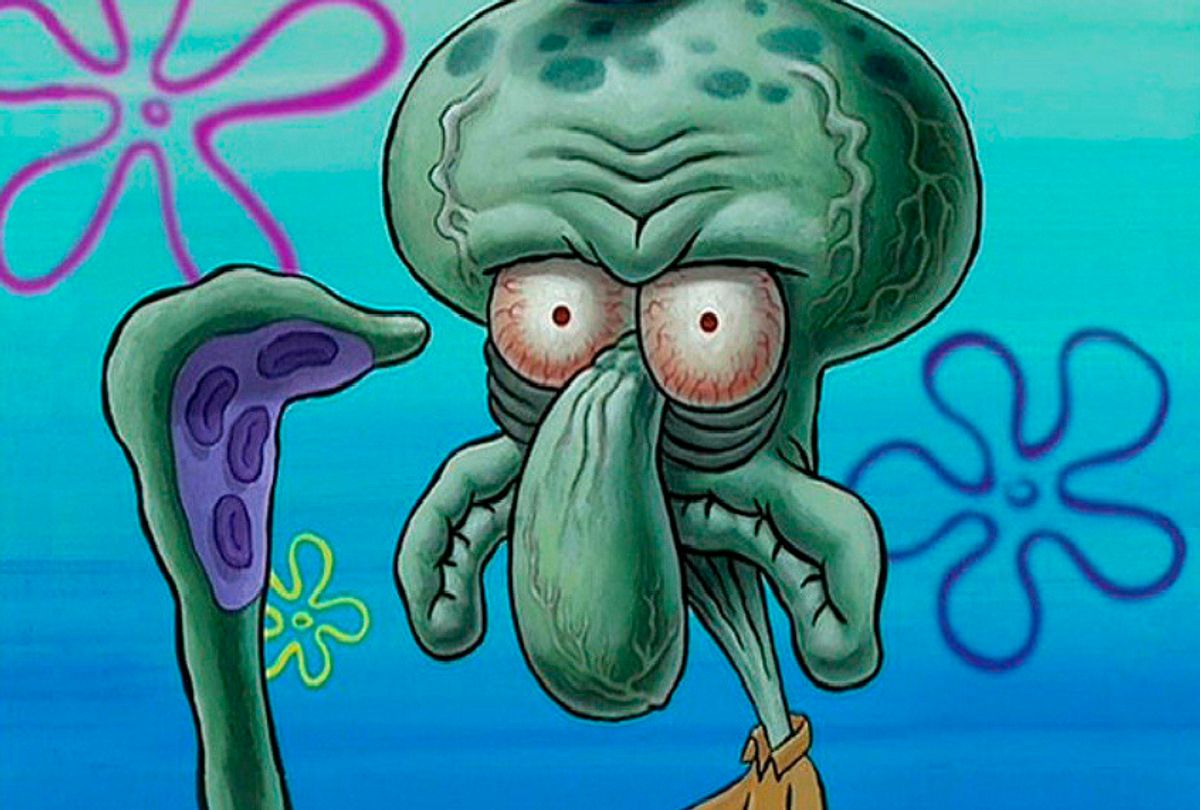 It's a shame that the "SpongeBob Squarepants Musical" is closing in September. While there is talk of a tour, it was nice being able to say that a property like SpongeBob Squarepants could make it on Broadway. There is a silliness to the juxtaposition, between the breezy yet subtly subversive tone of the TV show and the self-important bombast of the New York stage. As a fan of the series, I wasn't disappointed; qualitatively it was roughly on par with the first movie and better than the series' occasionally middling recent fare, though nowhere near the lofty heights of all-time great episodes like "Band Geeks" and "Chocolate with Nuts."

The musical's closing has also, as it happens, provided me with the occasion to discuss a silly subject I've long wanted to write about — namely, my unwavering conviction that one of the show's characters, Squidward Tentacles, epitomizes  the economically rooted malaise that in many ways defines the millennial generation.

"The media narrative on millennials is well known, accurate or not. Fear, frustration, confusion, helplessness, anger and depression are all assigned to them. So far, this is Squidward to a tee," Bumpass told Salon in an email.

"At least he’s not living in his parent’s basement, so in that [way] he is not millennial. But otherwise, he does indeed assume poster child status for this generation," he added.

If you're not familiar with the premise of the show, it's important to understand on "SpongeBob," plot is secondary. Like the Disney and Warner Brothers shorts of old, virtually all of the humor and the entertainment value comes from the characters, their quirks and how they react to stressful situations. There is the obnoxiously eager eponymous star, a square yellow sponge named SpongeBob Squarepants (voiced by Tom Kenny), whose relentless optimism is arguably out of whack with the banality of his service job and childish hobbies; his best friend, the dim-witted starfish Patrick Star (voiced by Bill Fagerbakke); a Texan squirrel scientist and adventurer named Sandy Cheeks (voiced by Carolyn Lawrence); Mr. Krabs (voiced by Clancy Brown), a greedy crab and owner of the local fast food restaurant the Krusty Krab, where SpongeBob is employed; Pearl, Krabs' cetacean daughter; Plankton, the series's unicellular evil genius antagonist (voiced by Mr. Lawrence); and an assortment of other colorful types.

And smack dab in the middle of that is Squidward Tentacles, who wallows in a state of existential despair that can be strangely intense for a kids' show. Squidward is a green octopus who is financially exploited by the miserly Mr. Krabs and wracked with feelings of failure (in "One Krabs Trash" he goes to the literal grave of his hopes and dreams). His work and personal routines genuinely bore his mind and stifle his soul, forcing him to constantly suppress feelings of inadequacy and hopelessness as his various lofty ambitions become increasingly unattainable. Even worse, he knows that he is economically powerless, from unsuccessfully trying to unionize in "Squid on Strike" and discovering that he has no talents to get any other kind of work in "Can You Spare A Dime?" to being ridiculed as a quintessential bad employee in "Krusty Krab Training Video."

"[Squidward], like many millennials, finds himself toiling away at a job with no upside, save a meager ability to pay the bills," said Bumpass. "Some say they are victims of poor parenting, a childhood of being told they are 'special,' can have anything they want and get awards for finishing last. A sense of entitlement ensues, much like Squidward’s constantly crushed hopes and dreams. He thinks highly of himself regardless of the realities shouting him down every day. We know nothing of his upbringing, so the causes are hidden for him."

Given his perspective, one can't blame him for viewing SpongeBob as an enabler and useful idiot for the Gogol-esque hell of Bikini Bottom existence. Every day salt is rubbed in his psychic wounds by SpongeBob's chipper attitude, just as periodically his self-loathing is reinforced by the taunts of a high school bully (an octopus named Squilliam Fancyson voiced by Dee Bradley Baker, at his best in "Squilliam Returns") who is far more successful than him, although Squidward is — improbably so, of course — a homeowner. ("He can’t be a millennial because he has a house. Millennials don’t have houses." Luke Brookshier, one of the show's writers, told Salon, a point also made by Bumpass). Can you blame Squidward for being a curmudgeon, for marinating in his own cynical ennui?

Squidward is, in short, the type of personality that one regularly sees among the generation that came of age during the bad economy of the 2000s: Viewed as entitled when really he just inherited a bad hand (or tentacle), miserable because life is passing him by, prone to bouts of laziness (fueled by despair) and full of nerdy dreams and pretensions. These facts are most eloquently expressed in these standout lyrics by his character in a song from the show performed by the Broadway Squidward, Gavin Lee:

"A recent article by a millennial describes them as Pragmatic Idealists, meaning 'Believe in your dreams and the only thing that stands between dream and reality is your own hands to make it happen,'" Bumpass told me. "Squidward is pragmatic enough to endure a mind numbing job so he can afford canned bread and cable, so he can watch House Fancy. However, his dreams consume his days, at least when he is not bored out of his mind or chased out of his mind by SpongeBob."

Bumpass says that at Comic Cons, fans tell him that the characters they identify with on the show change as they get older.

"[W]hen these people were young, they identified with SpongeBob. The innocence, childlike nature, the loving of all things silly and fun were their lives," he said. "Then, as they approached adulthood and witnessed what life really is like, they gravitated to the Squidward mode, angst depression, etc. My heart goes out to all young people learning the ways of the world. The good news is this whole big can of sea urchins is doable after all. Effort, perseverance, and courage are required. And It doesn’t hurt to have some canned bread to munch on while you’re waiting."

Certainly the identifiability of all the major SpongeBob characters is part of what makes them so popular online. Memes involving SpongeBob characters may rival those with minions or "The Office" characters in terms of sheer ubiquity, and as I spent an afternoon perusing them with my friend and dank meme connoisseur Nate, I saw that a lot of the funniest ones focus on either Squidward or Squidward-ian themes involving the general hopelessness of trying to live in a society: Funny faces of SpongeBob, Patrick and Squidward representing what it's like going to college; Squidward being surrounded by versions of SpongeBob as a metaphor for being in a group chat when you're trying to sleep; or, of course, Squidward saying "Please come again. When I'm not working." to a customer as a way of clearly displaying his hatred for his job.

"All the fans we meet identify with a specific character for their own reason, whether it’s Sandy, Squidward, Pearl, etc," Doug Lawrence, the story editor and voice of Plankton, told Salon by email. When I asked if he personally identified with Squidward, he became sardonic. "I hope we’re not like Squidward, but we probably are."

Writer Kaz Prapuolenis made a similar point, telling Salon that "I think these characters are here to identify with or not identify with depending how you’ve felt in the past, present, future."

At least one other member of the SpongeBob creative staff admitted that he feels like Squidward, even though he disagreed with the demographic-specific reading of the character's angst.

"I know I do, and I’m not a millennial," said Vincent Waller, a co-executive producer on the show. When asked how he saw Squidward in himself, he quipped, "I didn’t feel like Squidward until people gave me three giant portraits of myself that are hanging in my house."

Waller is correct about Squidward's plight not only applying to millennials. I'd argue that Squidward's themes are universal in their resonance — Generation X was also snarked at for its "cynical ennui" and no doubt future generations who have it worse than their parents will receive similar treatment — but so many millennials share his circumstances that he brings those conditions front and center. Does that make Squidward our culture's great uniter? Perhaps he has merely exposed SpongeBob's enthusiasm for his own economic oppression as making him into a tool of the establishment order?

Or maybe he is just a silly cartoon character for a children's show and I'm reading into it. After all, Marc Ceccerrelli, another co-executive producer of the show, said that his main similarity with Squidward is that "I tried to play the clarinet and never learned, so I identify on that level."

For his part, Bumpass' own identification with his character has been a journey as well.

"I used to say Squidward was my alter ego. As time goes on, the alter fades farther away," he said. "We are both sarcastic, although I try to use that super power for comedy. He screams a lot. I use that as therapy. I have saved a ton on psychiatrist fees. All in all, to quote Star Trek, he is my first, best destiny."

Check out the trending news stories of the day