When white nationalism goes mainstream: After Charlottesville, are right-wing groups on the rise?

As white nationalists rally in D.C. this weekend, one year after Charlottesville, it feels uncomfortably familiar 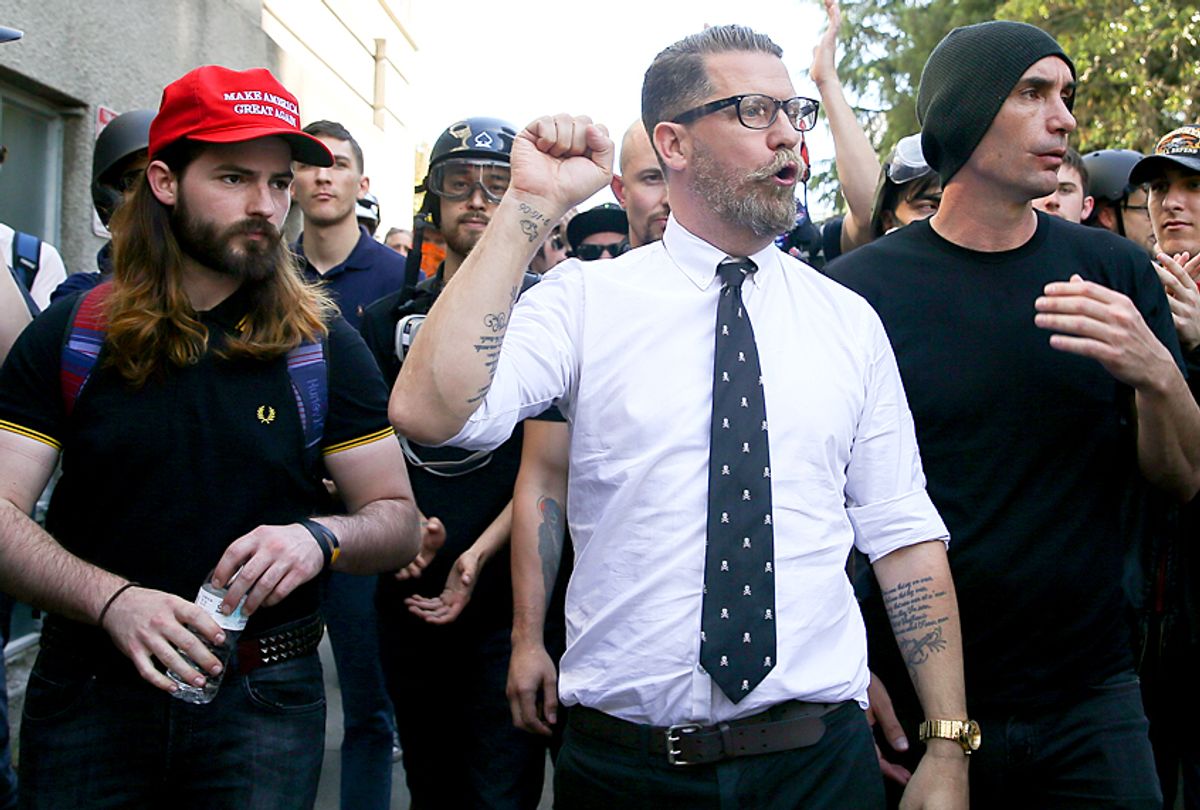 It’s worth remembering that a year ago, it was actually shocking to witness a brazen display of white supremacy in the streets of Charlottesville, Virginia. Hundreds of mostly white men with torches marching in the night and chanting “Jews will not replace us.” Even more heinous was the open assault on people of color, and the white supremacist who plowed his car into a crowd of peaceful protesters, killing Heather Heyer.

A year later, the events in Charlottesville seem less shocking and more like the inevitable, unavoidable effects of white nationalism’s ascendance via the embrace of a president and a major political party. If the torches in Charlottesville illuminated anything beyond their owners' contempt, it was that white supremacy was no longer on the fringes; it had gone mainstream in the form of white nationalism.

To Jewish Americans, all of this feels uncomfortably familiar. The violent ideology of white nationalism, of which antisemitism is an inseparable component, is part of both our modern-day experience and our historical memory.  And one year after Charlottesville, we are speaking up yet again because of what we are witnessing under the Trump administration: the hateful philosophy of the Charlottesville protestors translated into government policy with the goal of targeting other vulnerable groups.

Take the Trump administration’s policy toward immigrants. In recent months, we have seen cruel deportations of parents who’ve been in the country for decades, the separation of thousands of children from their parents at points of entry, and reports about new efforts to roll back the citizenship of naturalized Americans. The impact of these policies is not to clearly reduce crime or to improve public safety (as the Trump administration would have us believe), but to undermine America’s flourishing diversity. This is what white supremacy looks like when implemented through policy and enforced by government agencies.

Or look at the administration’s posture towards Muslims. The President’s implementation of the Muslim ban, his statement that “Islam hates us,” his fearmongering about foreign terrorism while homegrown, white nationalist domestic terrorism goes unacknowledged (and its study underfunded), are all taken from the playbook of white supremacy.

Trump’s embrace of white nationalism is also reflected in the company he keeps. His administration is, and always has been, staffed with unrepentant white nationalists, not only with the prominence of figures like Jeff Sessions, Stephen Miller, Sebastian Gorka and Steve Bannon, but throughout government, like former National Security Council staffer Michael Anton and Thayer Verschoor, a staffer at the Department of Veterans Affairs with a history of anti-Muslim extremism.

Nearly every action or statement this president puts forward, from his attacks on black sports icons to his administration’s attempts to roll back voting rights, are intended to further advance the dominance of a white, Christian politics and culture in American society while subjugating all other groups.

The decision by white supremacists to regroup a year later at the White House isn’t just revealing of how these extremists see its current occupant as a fellow traveler. It’s a sign of their desire to further normalize their beliefs and bring them even deeper into the political fold. It’s a celebration that people who share much of their worldview are in power. Through his radical agenda, through his destructive and violent rhetoric, Trump is fulfilling the vision of white nationalism and championing their worldview of bigotry and hatred. It’s no coincidence that a record number of white nationalists are openly running for public office in 2018 (and one such candidate may speak at the rally in D.C.).

When these right-wing groups rally in D.C. this weekend, we can expect to see a round of denials and denouncements from the White House and from Republicans. But the sympathies and worldview of this administration and its political party are clear, and we know that the white supremacists themselves will see these denouncements as the winks they are, while policies that further their desires continue unabated.

Although the Trump administration has not singled out Jews as a target of its agenda, antisemitism is undoubtedly a central tenet of white nationalism. White nationalists view Jews as the "puppet-masters" pulling the strings behind efforts to create a more diverse and equitable society and push back against white supremacy. Eric Ward, civil rights strategist and executive director of Western States Center, explains that these extremists view Jews as the “arch-nemesis of the White race, whose machinations have prevented the natural and inevitable imposition of white supremacy.” Anti-semitism is so core to their ideology that the organizers of the rally in D.C. are discussing ways they can “normalize” it, to make it less overt and more appealing to a wider audience.

A year after Charlottesville, it’s on all people of conscience to better know what we’re up against, to better understand what underlies and animates the bigotry of white nationalists and recognize how pervasive their ideas have become. The good news is it’s not too late to act: we have an opportunity to defeat white nationalism and its elected enablers at the polls this fall.

Only by better understanding this threat can we overcome it, and we can if we get to work now.

Stosh Cotler is the CEO of Bend the Arc: Jewish Action