In love? Then it's time for a road trip in the Roman countryside

When you are hungry and in love, there’s no better place to explore together than the hills beyond Rome 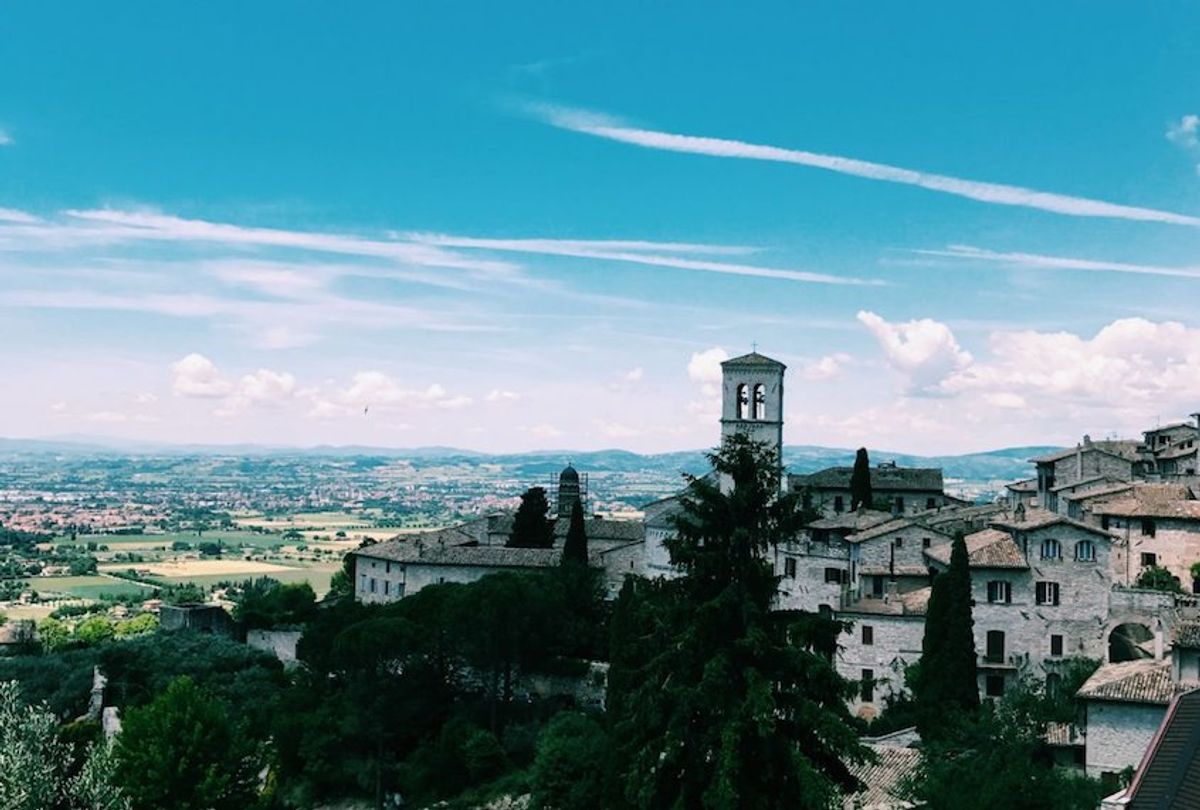 UMBRIA, Italy - “Let’s just get married.” I’m not sure which one of us said it. My boyfriend, Sean, and I sat outside Casale Satriano, the four hundred-year-old farmhouse where we had been staying. A quintessentially Umbrian view stretched in front of us: olive groves, grape vines, and pastel farmhouses as far as we could see. On our second bottle of Montefalco Rosso from the adjacent winery, a tart, fruity blend of sangiovese, merlot, and native sagrantino grapes, we were wine drunk and happy. We had been driving around Italy for nine days, and had semi-seriously proposed to each other as many times. 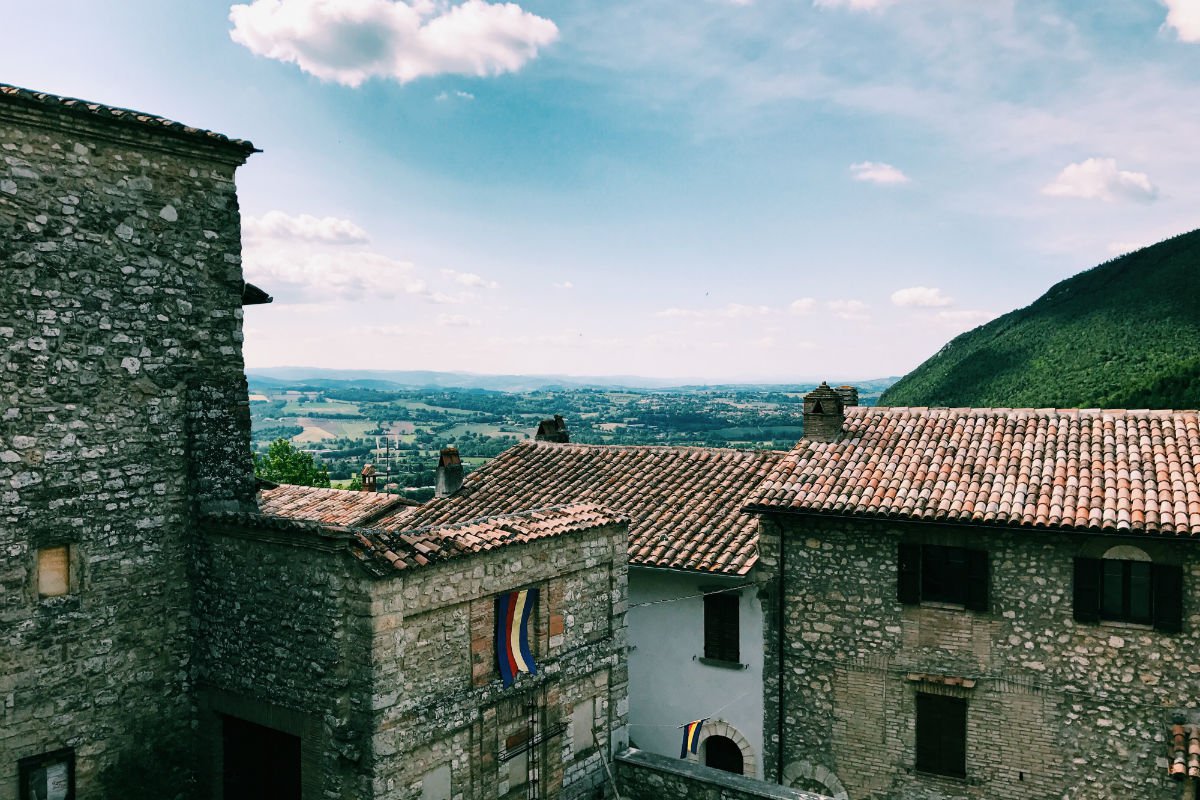 Our road trip started in Rome, with a post-red-eye espresso on the terrace at Hotel San Anselmo. It was Sean’s first time in Italy, his first time sitting in a jasmine-lined courtyard eating coronetti, a crispy breakfast pastry in the shape of a little horn. San Anselmo sits on a small, sloping piazza on the residential Aventine Hill, where we could see the neighborhood’s ubiquitous peach-hued houses from our bedroom window. “What’s next?” Sean asked. I grabbed his hand and took him on the scenic route, past Circo Massimo, around the Palatine Hill, through the ghetto’s little side streets, to Antico Forno Roscioli. We ate our pizza, served al taglio with crust as flavorful as sourdough, along the counter lined with locals on their lunch breaks. Tired and full, we took our espresso outside Sant’Eustachio Il Caffè.

Back at San Anselmo, he and I broke all of my jetlag prevention rules — a long nap, followed by cocktails at the hotel bar — and walked through Giardino degli Aranci, where orange trees grow along manicured paths and couples sit on the ledge overlooking Rome. “Should we stay a while?” Tempting, but we had a reservation to get to at Flavio de la Velavevodetto, where chef Flavio di Maio serves some of Rome’s best carbonara — balanced and not too rich — and cacio e pepe, exactly as silky and peppery as it should be. 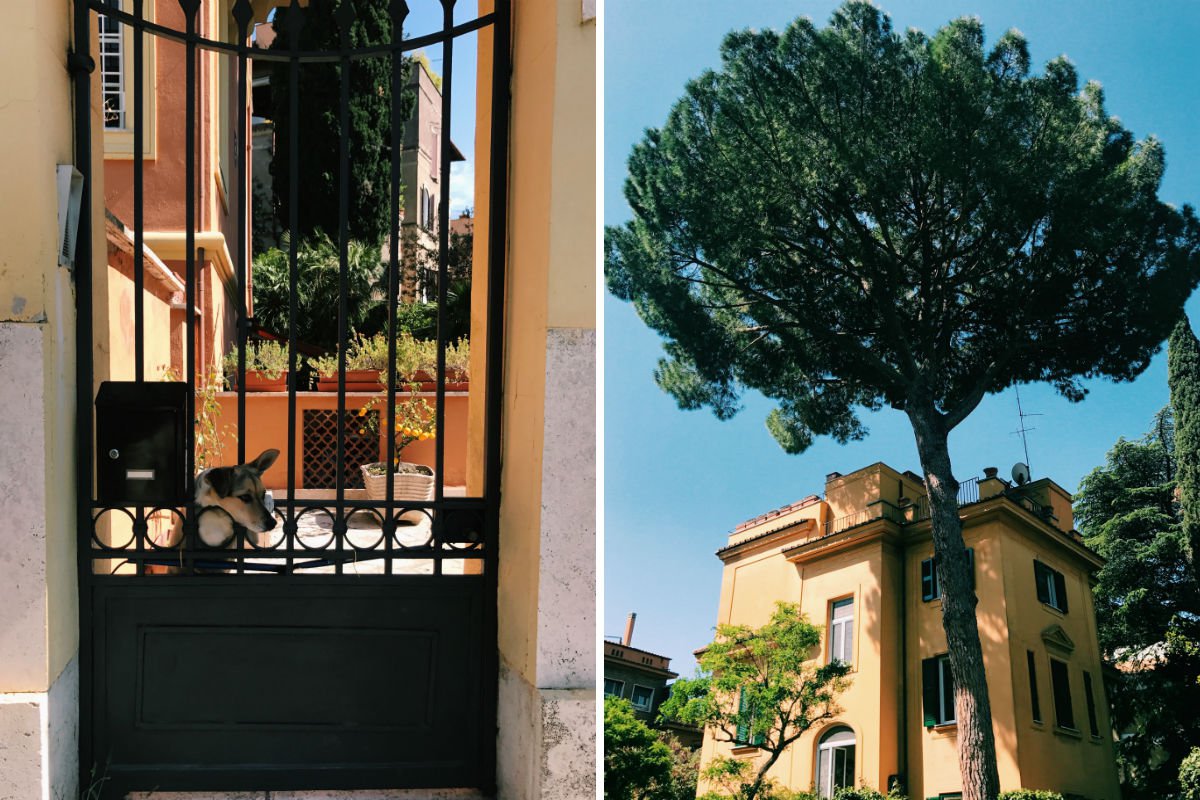 Both photos taken in Aventino, Rome. Photos by Tess Falotico.[/caption]

“Are you hungry?” Always. After a mid-morning tour of the Colosseum, we stood outside Forno Campo de Fiori and shared focaccia stuffed with prosciutto and mozzarella di bufala and pizza bianca with zucchini blossoms, mozzarella, and anchovies. We walked through Piazza Navona with hazelnut gelato from Giolitti, one of the few shops remaining that refuses to rely on artificial flavors and colors. Sean was patient while I scoped out vintage pieces at Lesley; I gamely led him to the toursity Trevi Fountain and Spanish Steps.

We walked across the Tiber River and down through Trastevere, where we put our name in for a table at La Tavernaccia and drank Peronis at the cafe across the street. “Let’s just get married.” But first, pasta. Fresh egg spaghetti alla gricia, to be specific. It was flawlessly executed, the pasta tender, the guanciale crisped and savory. 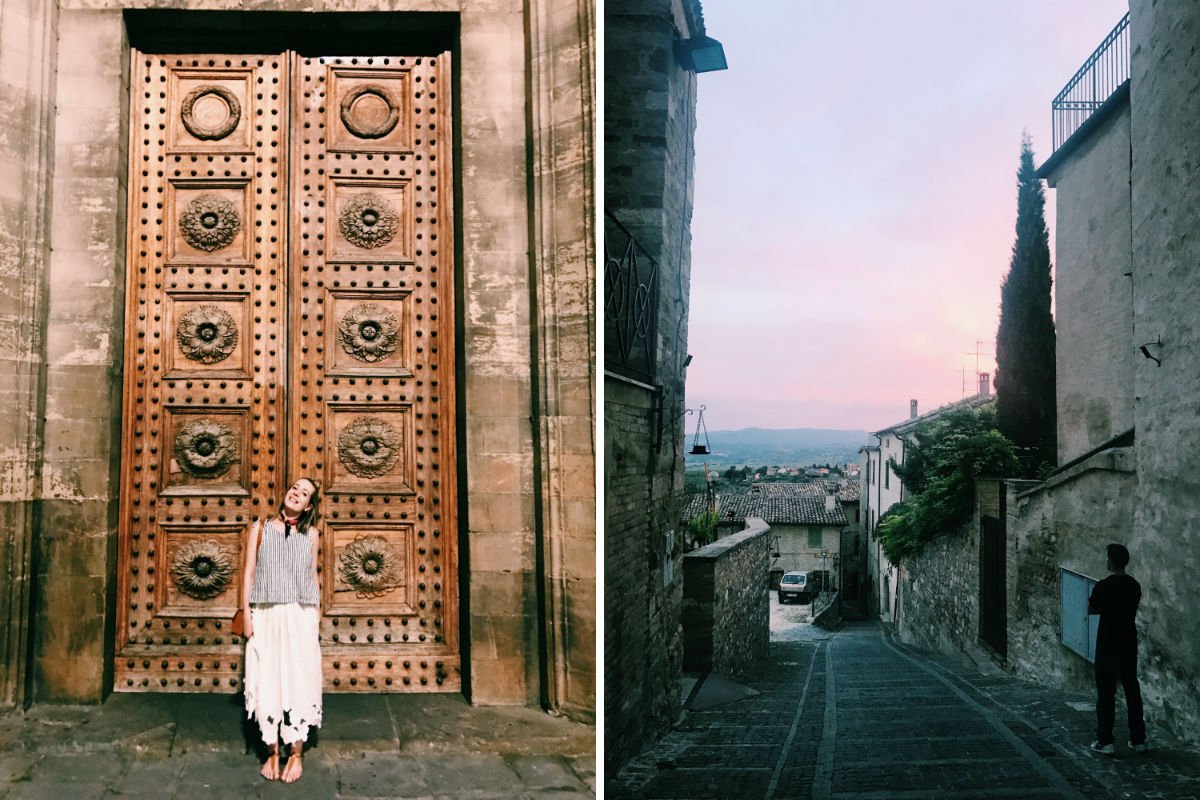 Tess in Florence (left). A sunset shot of the streets of Montefalco. Photos by Tess Falotico.[/caption]

“Is there anything else on the radio besides American pop?” Driving through Umbria, we passed mile after mile of olive groves and farm land, dotted with medieval fortresses-turned-villages. The landlocked region is known as the “green heart of Italy,” producing grains like lentils and farro, sheep’s milk cheeses, and cured meats, to name just a few agricultural highlights. It’s also a wine destination, with many producers using natural grapes and methods. In spite of all that, Umbria is still often referred to as a “well-kept culinary secret,” and has a lower price tag and fewer tourists than neighboring Tuscany.

We were ultimately headed to Montefalco, but we set the GPS for Portaria, a thirteenth-century hill town along the way. There, the forty-year-old restaurant Sorelle Pesciaioli serves pizza sotto lu focu, flat breads baked over a wood fire, sliced open while they’re still hot, and stuffed with cheese and cured meats.

When we finally arrived at Cantina Antonelli in Montefalco, resident oenologist Massimiliano Caburazzi was hosting a tasting, but he paused long enough to pour us each a glass of sagrantino, a grape native to the region that yields intensely tannic and aromatic reds. We sipped our wine on the terrace, Umbria stretched before us, the cantina’s sweet resident dog curled at our feet. Massimiliano handed us a key and, per his instructions, we drove down a gravel hill with olive trees and bougainvillea on either side toward Casale Satriano, the faded-peach farmhouse we’d be calling home for a few nights.

Later, we parked just outside Montefalco’s walled village and trekked up cobblestone hills into the town’s main piazza. I booked us a table a few weeks ahead of time at Locanda del Teatro, an upscale celebration of everything Umbria has to offer: buffalo mozzarella, lettuces from the garden, fresh pasta with tender fava beans and aged pecorino, bottles from the area’s natural-leaning winemakers.

“Huh,” Sean said from behind his phone. “Florence is only a couple hours from here.” We had originally ruled Florence out, thinking the additional city would ruin the slow pace of our road trip. But now that we were this close, how could we not? Our farmhouse would be waiting for us when we returned; we booked an Airbnb in Florence for the following night. 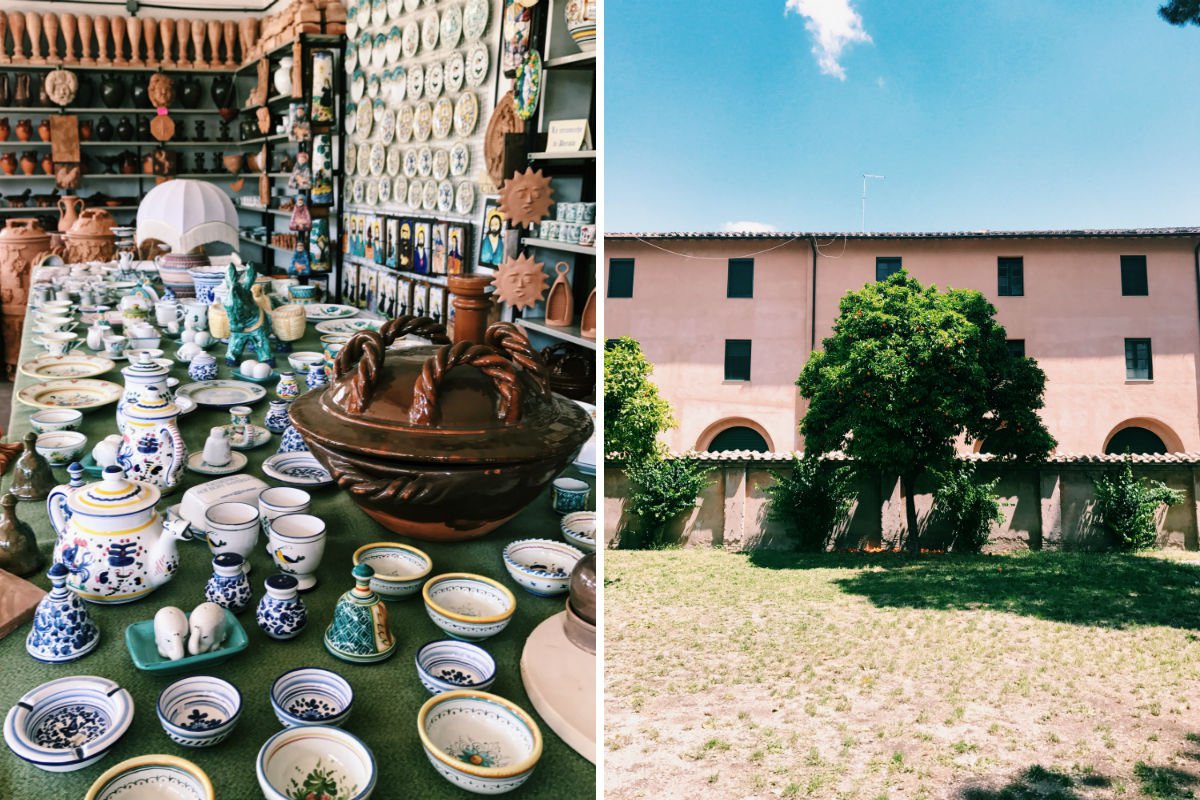 “Never underestimate the coffee at Italian rest stops,” I reminded Sean. We set out for Florence and, by midday, had checked into our apartment in up-and-coming San Frediano. With only 24 hours in Tuscany, I was determined to eat some truffles. Procacci serves them in every form: folded into butter and spread onto sandwiches, for example, or infused in honey and drizzled over cheese. I took Sean on an amateur Renaissance tour — Cattedrale di Santa Maria del Fiore, the Uffizzi, and, my personal favorite, Santa Maria Novella (both spectacular church and the staggering perfume shop by the same name).

For dinner, we stumbled upon Volpi e l’Uva, a jewel box of a wine bar. The move there is to ask the staff which Tuscan wines they’re excited about, and then pair them with cut-to-order salumi. We did exactly that, then ate gelato from Passera on a bench in a small, quiet piazza. Sean grabbed my hand, and we took one random turn after another. We pulled ourselves up onto the edge of a concrete fountain and watched people linger over late, al fresco dinners. I don’t know how long we wandered around, drunk on wine and our own ill-advised spontaneity. “Let’s just get married.” But we were leaving Florence in ten hours, so we went to bed instead. 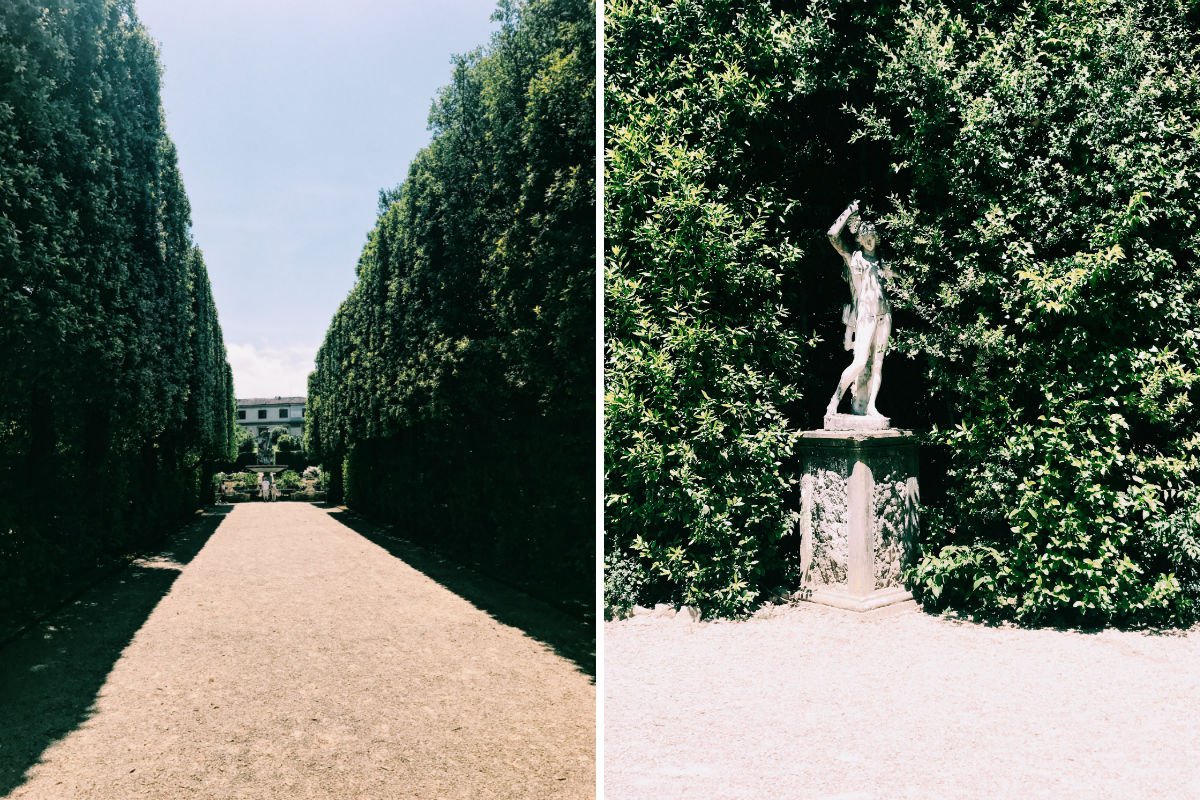 Our Tuscan interlude behind us, we stopped for lunch in Assisi en route to Montefalco. The birthplace of St. Francis, Assisi is as touristy as Umbria gets, its main draw being the massive basilica in his name. Good restaurants (that is, restaurants that don’t have English menus) are few and far between, but we went straight to my parents’ preferred place, Da Cecco (Piazza S. Pietro, 8), for nutty, local farro pasta with mushrooms.

On the road back to Montefalco, I spotted signs for the town of Deruta , which is home to hundreds of traditional ceramics workshops, many of which are lined up right along the highway. “Take this exit!” Sean obliged. Given that I’m constantly trying to achieve an “old Italian lady” aesthetic, I had some shopping to do.

Late that night, we sat at a table outside L’Alchimista in Montefalco. Locals drank their favorite wines over empty plates while their kids ran around the piazza. Sean and I tucked into melt-in-your-mouth lamb ribs and ordered just one more glass of sagrantino, which was practically made to stand up to the rich, red meat. 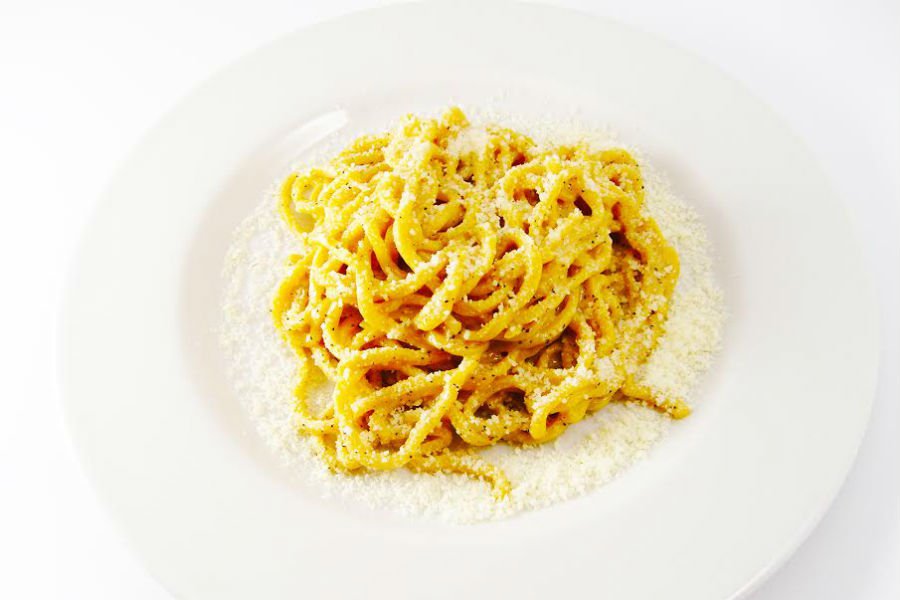 “You’re rolling your pasta dough too thin,” Sean told me. We bickered shamelessly in front of Wendy Auselbrook, who teaches visitors the basics of Umbrian home cooking out of Antonelli’s “cucina in cantina,” a commercial-grade kitchen and charming farmhouse on the Montefalco property. Wendy and Teresa, a highly skilled, local home cook-turned-instructor, taught us to bake pillowy focaccia, roll fresh pasta, and roast chicken like the Umbrians do. We pureed herbs and zucchini from the garden into a fresh, green sauce for our pasta, and used the property’s own sagrantino to make fennel-scented, red wine biscuits. At the end of our lesson, Wendy set a long, farmhouse-style table. She paired each of our homemade courses with an Antonelli wine, starting with the mineral grechetto and ending with the passito, a dessert wine made with sagrantino, to tone down the sweetness in our panna cotta.

A tour of the winery and one very long nap later, Sean and I drove into town to pick up some prosciutto, local pecorino, and ripe figs. Along with a few bottles of Montefalco Rosso and the focaccia we had made together, we set up a picnic outside our little farmhouse. Maybe it was the breeze, which smelled like bougainvillea, or the fact that we were the only two people for as far as we can see. Maybe it was the wine. “Let’s just get married.” Maybe next time. 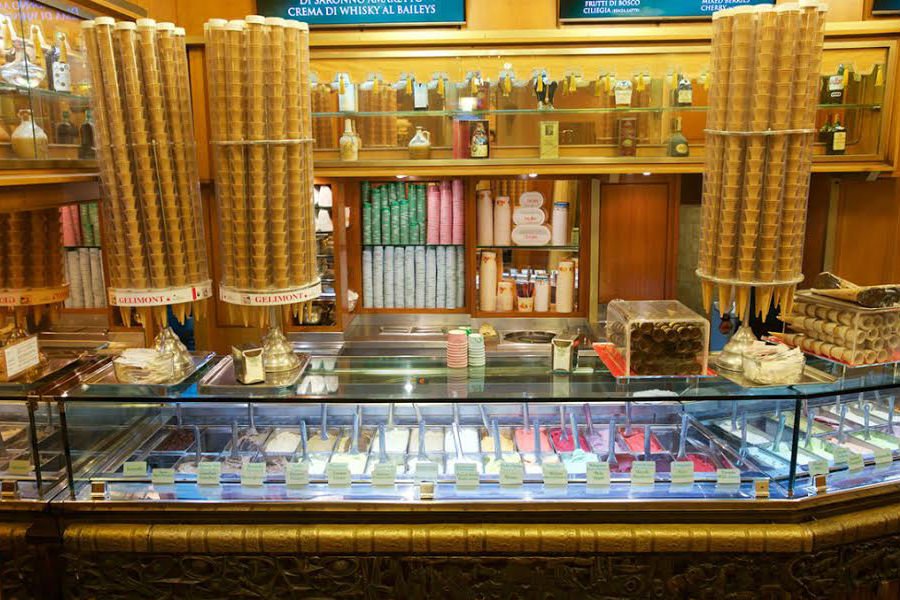 Keep hitting the road
The Best Road Trips in the United States
Hit the Road: 11 Itineraries for the Ride of Your Life
Forget Bucket Lists. This Is How to Have an Epic Road Trip