Where there’s smoke, there’s a liar

Trump weighs in on the California fires . . . and gets everything wrong 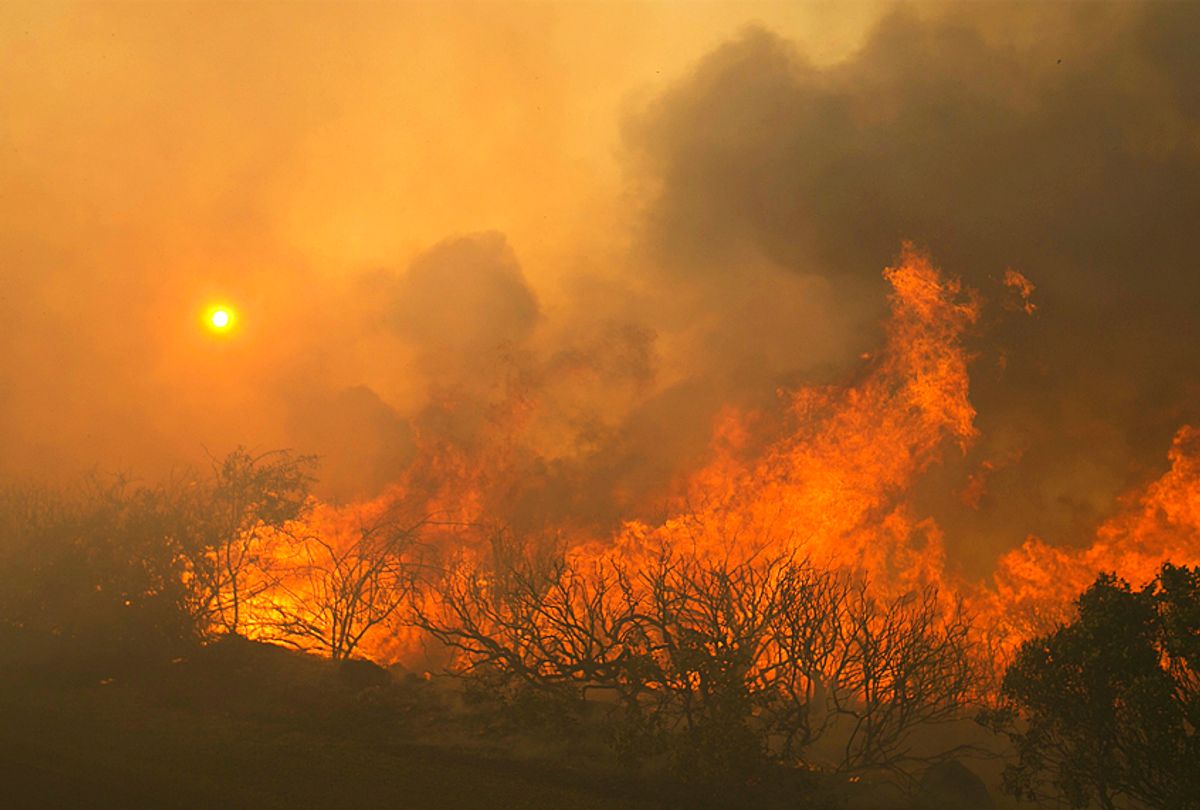 Even hundreds of miles from the multiple wildfires in Northern California, smoke from the fires turns the sky gray. These wildfires are huge and dangerous, as well as sneaky and hard to put down.

Apparently, the scientific and emotional reality from that danger doesn’t really reach Washington — or Washington in exile at the Trump resort in Bedminster, N.J.

Trump decided to wade into the forest firestorms, which are bringing up anew conversations about the effects of climate change, by tweeting earlier this week.

“California wildfires are being magnified & made so much worse by the bad environmental laws which aren’t allowing massive amounts of readily available water to be properly utilized,” Trump tweeted Sunday. “It is being diverted into the Pacific Ocean. Must also tree clear to stop fire from spreading!”

But this tweet, as usual, has a couple of reality problems.

This is a tweet worth examining. There are no “lies” in it, just policy misunderstandings. Simply put, to me, any president, Trump included, should be able to describe accurately what problem his administration is trying to solve. So, inaccurate linkages of wildfires to water management or hiding a business-leaning set of deregulation moves behind causing wildfires is plain lazy. He is not doing his homework. Or he is turning a disaster that is burning homes into a partisan political statement on a totally unrelated water management issue.

For openers, available water does not seem to be the problem in these wildfires. There are nearby lakes and reservoirs, and the prime tools for fighting these fires include creating fire breaks and dropping chemical retardants; water suppression generally plays less of a dousing role.

Secondly, the reference to bad environmental rules probably is about the long-term debate between big farms, which want free irrigation waters, and environmentalists, who want to maintain natural wetlands as water moves downstream.

And then Trump also throws in forest clearing, as if that is related to the cause of the fires. Indeed, his administration is moving to allow commercial logging of healthy green pine trees for the first time in decades in the Los Padres National Forest north of Los Angeles, a tactic the U.S. Forest Service says will reduce fire risk, according to The Los Angeles Times.

The tweet never mentions climate change, because Trump views it variously as a “hoax” manufactured by the Chinese or bad policy because it unduly punishes U.S. investment and business growth. It is not about adding jobs. Nor does it reflect any empathy for those who have lost their homes.

Scientists — people Trump apparently disdains — say that the earth is warming, which in turn is drying areas like California; that weather patterns are becoming more extreme with too much rain and flooding, or there is too much heat, leading to drought. Overall, California is facing dry forests and conditions in which wildfires can take hold quickly. Gov. Jerry Brown has said this dryness is the new norm.

The L.A. Times noted that the brunt of Trump’s tweet attempts to tie the fires ravaging Northern California to complaints by members of the state’s Republican congressional delegation about environmental protections that have reduced water deliveries to San Joaquin Valley agriculture. But Scott McClean, deputy chief of the state Department of Forest and Fire Protection, says, “We’re having no problems as far as access to water supply. The problem is changing climate leading to more severe and destructive fires.”

Meanwhile, the White House is seeking to reopen some of the most sensitive and sought-after public lands in the state not just for timber production, but also for potential solar, wind, broadband infrastructure, mining, off-road vehicle and grazing uses. Environmental groups have long argued that the logging industry has used fire as an excuse to plunder forests, cutting big trees and leaving behind only small, unmarketable timber.

The timber industry, however, says that in order to remove flammable deadwood and stop the spread of insects to still-healthy trees, it needs greater access to more valuable live trees.

So far this year, an estimated 4,800 fires have burned about 550,000 acres, destroying more than 1,000 homes and killing eight people including four firefighters, authorities say.

Since the early 1990s, when people started moving in greater numbers to forested areas, the Forest Service has been under pressure from the environmental movement and the timber industry to come up with a strategy acceptable to both. Timber harvesting in Southern California has been largely restricted to post-fire thinning and salvage logging operations in and around alpine communities such as Idyllwild in the San Jacinto Mountains and Lake Arrowhead and Big Bear Lake in the San Bernardino Mountains. Most of the marketable wood generated by those efforts was cut and sold as firewood.

L.A. Times columnist Michael Hiltzik said Trump “deserves some sort of award for most glaring misstatements about (climate change and water policy) in the smallest number of words.” Hiltzik adding that “It’s proper to note that the environmental policies being promoted by the Trump White House will make climate change worse, further endangering forest areas.

Trump “has no idea what’s causing the wildfires this season, no conception of how to fight them and no plan in place to alter the trend of more fires or more severity. Doing so means devoting attention to a complex problem that involves science, nature and government action. That can’t be accomplished via a Sunday night tweet.”