Is the Army turning into Animal House?

Recruits who are fat, stupid and have criminal records is no way to run the military 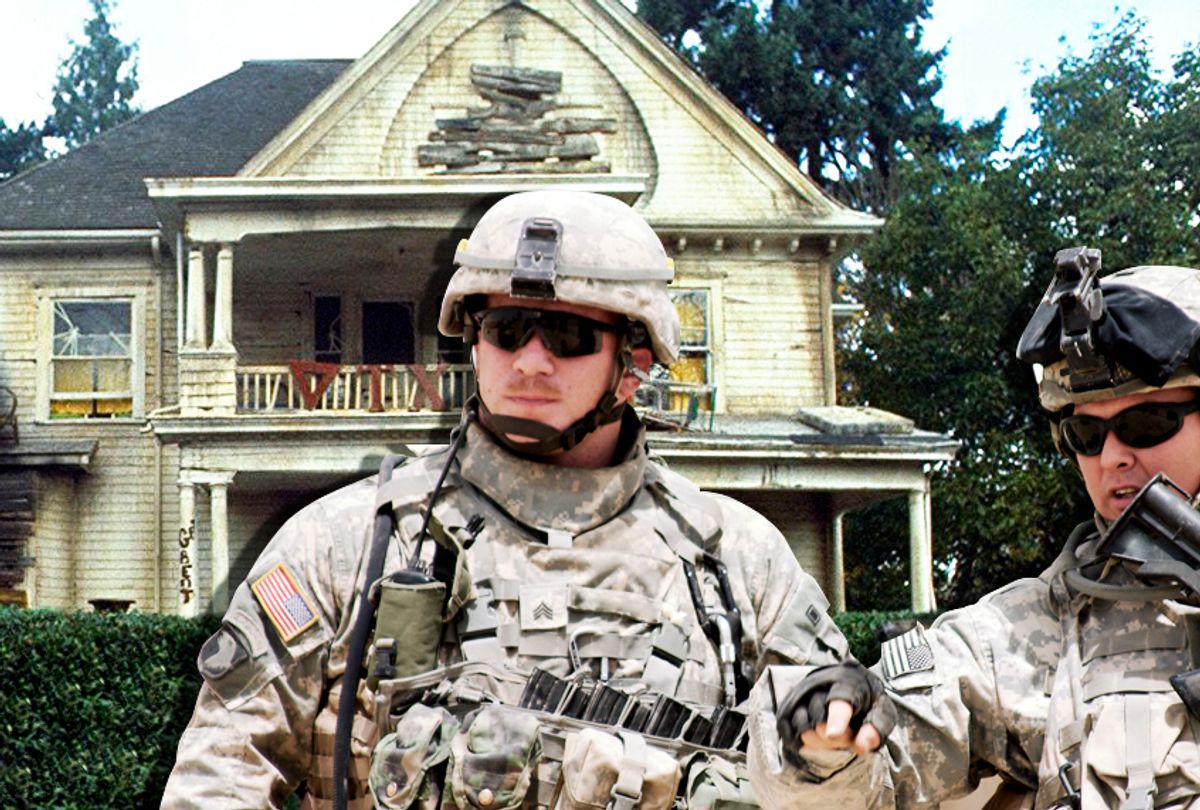 Former Secretary of Defense Robert McNamara’s name will live in infamy for many reasons, not the least of which was his admission late in life that he knew the war in Vietnam couldn’t be won even while he sent thousands of American troops to their needless deaths and ordered the bombing of North Vietnam. In an interview with the Washington Post when his memoir was published in 1995, McNamara admitted that “as far back as December of '65 I said to the president, I think we have only a 1-in-3 chance to win militarily, at best 1-in-2.' He said: Are you saying the war can't be won militarily?' I said yes."

He went on to explain away his craven admission of his role in the deaths of more than 58,000 young American men and women and uncounted millions of Vietnamese by citing a lame version of the so-called domino theory. “If we lose South Vietnam, it can lead to a catastrophic war. World War III,” McNamara explained. “America was going to lose, but at the same time, America could not be allowed to lose.”

It’s been seventeen years since we invaded Afghanistan and started the war we’re still fighting there, and fifteen years since we invaded Iraq and sent that country into the miasma of violence and death by combat we are responsible for today. McNamara’s excuses for his role in this country’s last military misadventure ring as hollow today as they did some 20 years ago, and so do the pathetic bleatings emanating from the corridors of power in Washington D.C. justifying our endless wars in Iraq and Afghanistan.

Even with the draft, McNamara couldn’t find enough qualified recruits for the meatgrinder of Vietnam, so he began a policy called “Project 100,000” that reduced the physical, mental, and moral requirements for military service. The program was a disaster. Between 1966 and 1971, about 350,000 draftees were overweight, physically impaired, mentally deficient, or had criminal records.

“Fat, drunk and stupid is no way to go through life, son,” said the president of Faber College to one of the pledges from Animal House as he reviewed the fraternity’s failing grades. They aren’t slapping a dumbass name like Project 100,000 on the Pentagon’s recruiting policies today, but here we go again.

According to a February 2018 Politico story, “The Army anticipates problems meeting its 2018 goal to enlist 80,000 qualified volunteers, even with increased bonuses and incentives. Nearly three-quarters of Americans age 17 to 24 are ineligible for the military due to obesity, other health problems, criminal backgrounds or lack of education, according to government data.”

The commanding general of the Army’s Recruiting Command told the Army Times in 2015 that “The obesity issue is the most troubling because the trend is going in the wrong direction. We think by 2020 it could be as high as 50 percent, which means only two in 10 would qualify to join the Army.”

So what is the Pentagon going to do? They’re going to reduce recruiting standards and throw money at the problem. “The Army is offering $40,000 enlistment bonuses and paid $424 million in enlistment bonuses last year. The Army is also trying to meet its goal by granting ‘moral waivers’ for criminal offenses from drug convictions to arson,” according to the Army Times.

The Army is authorized to enlist up to four percent of its recruits from the “Category IV” standard. These are recruits who score between the 10th and 31stt percentile on the pre-enlistment aptitude test. According to the Army Times, Category IV soldiers are less likely to complete their term of enlistment and are harder to train “due to cognitive skills and illiteracy.” They are also more expensive to train and “significantly more likely to subsequently be screened at ASAP [Army Substance Abuse Program], test positive for an illicit substance, or separate from the Army for misconduct behavior.”

Fat, drunk and stupid is not a joke.

“A 2005 Rand study reported that a Category IIIA tank gunner (scoring in the 50th to 64th percentile on the aptitude test) had a 34 percent greater chance of hitting the target than a Category IV tank gunner,” according to the Army Times.

I had some hands-on experience with Project 100,000 recruits in 1967, not long after McNamara instituted the policy. While a cadet at West Point, I was assigned during summer training as Executive Officer of an Armored Advanced Individual Training company at Fort Knox, Kentucky. The company was comprised of about 100 recruits brought in under Project 100,000 and 25 guys from New York’s Rainbow Division, stockbrokers and other privileged New Yorkers who joined the National Guard to dodge the draft. It was an incongruous mix, to say the least: Animal House meets Wall Street on a tank firing range.

Most of the Project 100,000 guys were from the hills of Kentucky, West Virginia and Tennessee and the inner cities of Nashville, Memphis, Pittsburgh and Cincinnati. Under McNamara’s policy, prisoners serving less than two years in jail on misdemeanor and non-violent felony charges were given the choice of serving out their time, or joining up. About half of my company’s trainees were right out of jail.

We had to spend several extra days on the tank firing range to qualify our quota of trainees on shooting the main gun on the M-48 battle tank and the .50 caliber turret-mounted machine gun. I remember watching with great trepidation 105 millimeter tank rounds and .50 caliber tracer rounds flew wildly downrange, some of them even hitting the target. I was afraid someone was going to get killed out there.

The other big test the trainees had to pass was driving the tanks. For the test, we were sent out on a 20 mile road march in our 25 tanks, switching drivers every five miles. A major followed alongside the company in a jeep, grading the exercise. I’ll never forget the first mile of the test. I was in the cupola of the second tank wearing a tanker’s helmet, communicating with the other tanks on the radio as we headed across a broad, dusty field. The plan was to turn left at the far end of the field on a road we would follow for the rest of the road march.

I swiveled the cupola to the rear as we approached the road to check on the tanks in line behind us. When I swiveled back to the front, the tank in front of me had disappeared. I mean, it was gone. I ordered the rest of the tanks to stop, and told my driver to pull up to the road. The driver ahead of us had missed the road and drove the lead tank straight down into a deep gully.

I ordered the tank-puller forward, and we hooked up its crane and extracted the missing tank and proceeded with the road march. To my great surprise, the major gave us a passing grade.

I was beginning to think the entire company would make it to graduation when pay day arrived. My job was to pay the company in cash, and then “counsel” each of them, which consisted largely of making sure they were writing home to their families and that they didn’t have any complaints of discrimination or the like.

The trainees had by now been in the Army for a little over three months, and a couple of them told me during counseling that they had received letters that they had “a little problem back home.” Their girlfriends were pregnant. I fixed them up with emergency leave over a long weekend and issued them travel vouchers for the Greyhound bus so they could go home and take care of things.

I had about ten guys left to counsel when yet another soldier came in and said he had a problem back home. I began filling out his leave form and telling him where he could catch the Greyhound bus when he said, “but sir, but you don’t understand.” I looked up from my paperwork and told him he wasn’t the only guy in the company who had gotten his girlfriend pregnant and there was nothing to worry about. All he had to do was go home and make his arrangements and come back by Sunday night and everything would be fine.

I swallowed hard and looked across the desk at him. He was just another guy in the company: fresh-faced, barely started shaving, nervously twisting the cuff of his fatigue jacket between his fingers. He was correct that I didn’t understand, but there I was. He was my responsibility. I had to do something for him, and for the Army.

I told him to wait in the orderly room and finished counseling the rest of the company. Then I figured out how to do the paperwork and issued him a compassionate discharge and a travel voucher and sent him on his way.

Vietnam was biggest disaster in this country’s history right up until we invaded Afghanistan and Iraq, and Project 100,000 would have amounted to a footnote to another one of our miserable national mistakes. But there are costs to our misbegotten misadventures. Real lives of real people are affected by policies that seem like a good idea at the time. No amount of bonus money or standard-lowering can account for the damage ill-conceived ideas can wreak.

We are all human, and because of that inescapable fact, people get wounded in more ways than you can imagine. And in the Army, some of them die.