Omarosa and the forgotten Martha Mitchell: Unlikely heroes who brought down a president?

Omarosa's nowhere near as sincere as Martha Mitchell, the boozy Southern belle who destroyed the Nixon White House 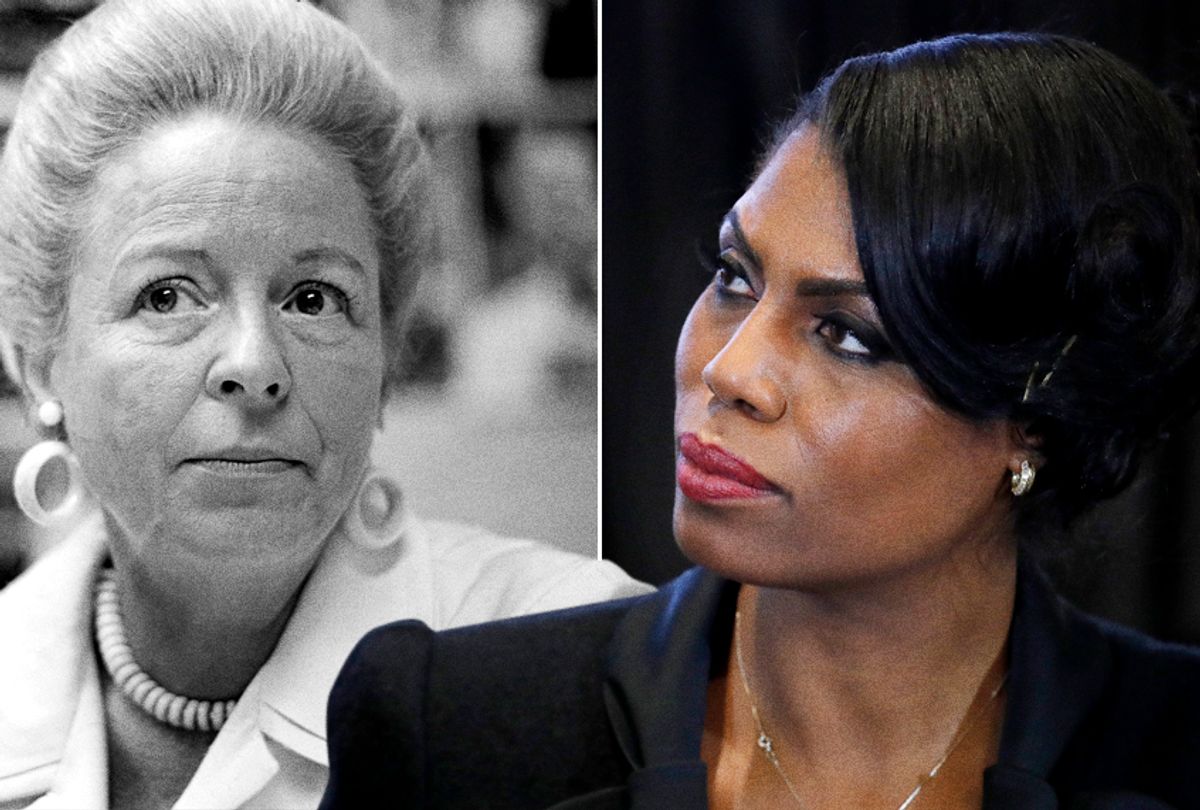 I doubt there was even one Vegas oddsmaker who would have taken the bet that Omarosa Manigault Newman wouldn't write a book about the Trump campaign and administration the minute she left the White House. It's what they all do. In the old days, folks generally waited until the president was out of office, but George Stephanopoulos broke that norm when he wrote his memoir shortly after leaving the Clinton White House and shared a lot of information that embarrassed his former boss.

The most famous reality-show villain on television, known only by her first name -- like Cher or Madonna -- Omarosa almost certainly took the job with the Trump campaign in the first place because it would afford her this opportunity to turn the screws on her show-business mentor, Donald Trump. That's how reality shows work. It was scripted in the stars.

Omarosa's new book may be mostly fiction, but like any good reality-show narrative, it must contain some elements of truth in order to be believable. The tapes she is releasing in carefully managed episodic fashion on her publicity tour back up at least some of the claims in her book, and she is clearly scaring the hell out of everyone in the White House. If she's been secretly taping conversations since she joined the team, there is no telling what she has.

As I watched Omarosa on the various news programs and talk shows this week, I was reminded of another famous gadfly who made the White House very nervous in similar circumstances. Back in the early 1970s, a garrulous Southern belle who was married to one of the most powerful men in Washington used to have a drink or two and then call up reporters to share information she'd overheard eavesdropping on her husband's meetings. I'm speaking of Martha Mitchell, the wife of John Mitchell, who was attorney general in the first Nixon administration and ran the Committee to Re-elect the President, also known as CREEP.

Martha Mitchell too was something of a TV star and household name, known for speaking her mind and causing no end of heartburn for the Nixon administration, largely because they didn't know what she knew and who she was going to tell it to. As it happened, she knew a lot because her husband was a corrupt schemer who was in charge of any number of nefarious doings in his capacity as Nixon's campaign chairman.

As the Watergate scandal unfolded, Martha Mitchell was considered a ticking time bomb, and Nixon's supporters went to great lengths to portray her as a lunatic who was not to be believed. At one point a bodyguard physically restrained her from speaking to UPI reporter Helen Thomas by yanking the phone out of the wall. Later, on her husband's supposed orders, Mitchell was held down, tranquilized and kept under lock and key for several days. This was all known in real time as the story was unfolding but was largely relegated to the "women's pages" and treated as a sideshow.

What made me think of Martha in light of Omarosa's publicity tour wasn't that they are personally similar or that Omarosa is being treated anywhere near as horrifically. Omarosa is a savvy celebrity, playing by the same rules as Donald Trump. She is his creature, after all. Mitchell was a far more sincere kind of troublemaker. But aside from the spectacle of a woman in the president's orbit running around making charges of criminality and corruption, there are a couple of things more substantially comparable between the two.

One of the charges Omarosa has made in her book and TV appearances indicates that the Trump operation has something very specific in common with the Nixon re-election campaign that was run by Martha Mitchell's husband: hush money.

We already knew that Trump was in the habit of paying people to be quiet by using nondisclosure agreements. After all, that's what all the hubbub regarding adult film actress Stormy Daniels and his (alleged) former mistress Karen McDougal is about. But according to Omarosa, the Trump White House is using the same tactic through the president's re-election campaign, in a fashion that sounds strikingly similar to the famous CREEP "slush fund" of campaign donations that John Mitchell used to fund dirty tricks and pay various henchmen to keep quiet. Omarosa provided NBC News with a copy of the nondisclosure agreement Team Trump wanted her to sign in return for her silence and $15,000 a month.

According to The Washington Post, this is not an unusual arrangement in the Trump White House, which has seen an unprecedented amount of turnover. The Post reports that the White House Counsel Don McGahn also drafted a short nondisclosure agreement for all staffers that is almost assuredly unenforceable but that the president has insisted on anyway. This practice may be legal, depending on where the money comes from and how it's accounted for. But as with so much else in TrumpWorld, it has "cover-up" written all over it. Hush money usually does.

Martha Mitchell also said over and over from the beginning that Richard Nixon had ordered the cover-up of the Watergate burglary. This was the big issue of the entire scandal, prompting the famous question, "What did the president know and when did he know it?" Once everyone heard the Oval Office tapes, it became clear that despite all the mocking and disrespect, Martha had been right all along.

On Tuesday, Omarosa said something else that echoed Mitchell's insistent charges from all those years ago. She told Katy Tur of MSNBC that she had spoken to Special Counsel Robert Mueller's team and told him that Trump knew about the Clinton campaign's emails before they were released by WikiLeaks. Who knows? Maybe she's got the tapes to prove it.

Richard Nixon himself told David Frost in their famous series of interviews, "If it hadn't been for Martha there'd have been no Watergate. The point of the matter is that if John had been watchin' that store, Watergate would never have happened." If that's so, here's to Martha Mitchell, unsung hero of that scandal. And if reality show villain Omarosa can prove that Donald Trump knew about the Russian hacking operation in advance, then whatever her motives are, she'll be a hero too.