Newly obtained documents provide details on troubling incidents, including children having sex in a TV room. 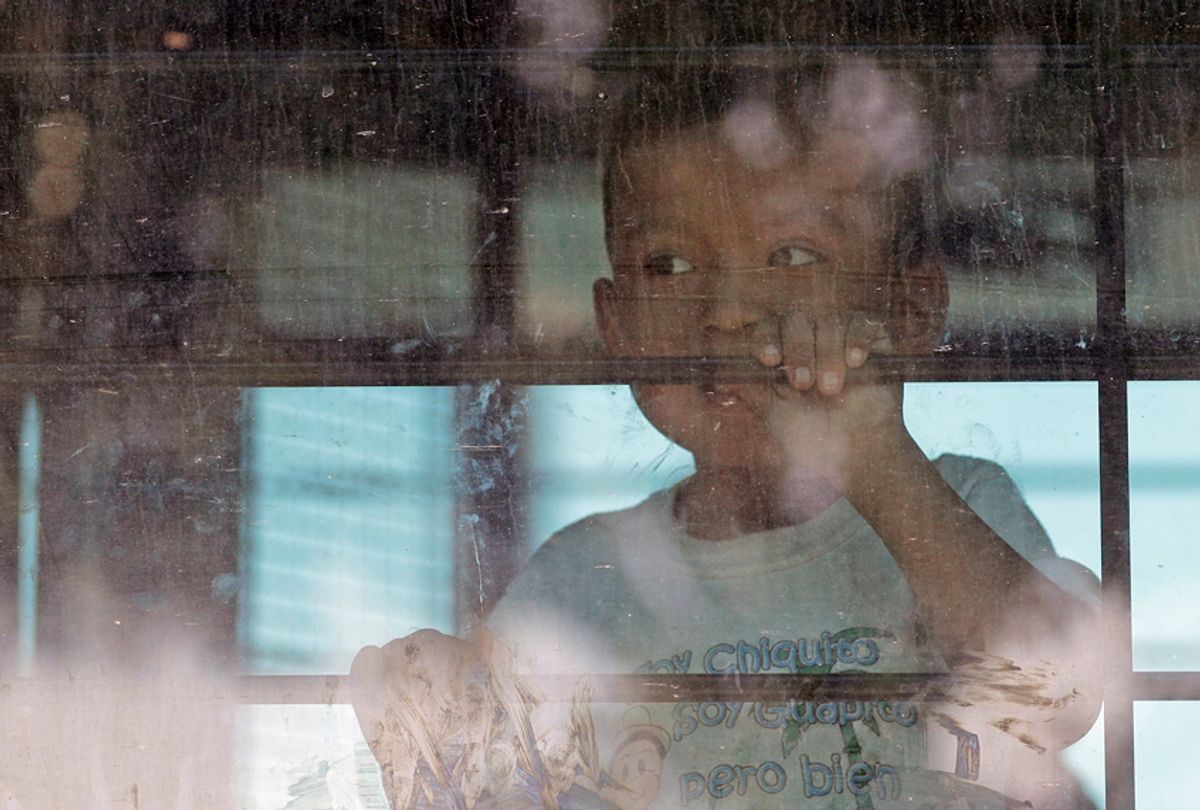 Soon after Christmas 2015, three boys were left unattended in the TV room of a Des Plaines shelter that houses immigrant children and is operated by Heartland Human Care Services.

The third boy in the room, the youngest, had been playing video games. He then walked to the door to act as a lookout, according to documents based on video of the incident.

The Department of Children and Family Services, the state agency charged with licensing the facilities and investigating allegations of child abuse and neglect, cited Heartland for not providing appropriate supervision — a failing that has been repeated multiple times during the past 3-½ years, ProPublica Illinois reporting has found.

Among other incidents, an employee at a Heartland shelter in Chicago was investigated for an alleged sexual relationship with a teenager. And at least 10 children have run away while in Heartland’s care in recent years, including one who was supposed to be individually monitored by a staff member.

Records also show that on more than one occasion, not enough staff was on duty to meet the needs of children or employees didn’t have plans to properly monitor them. One supervisor told an investigator the environment at one shelter had become “lax,” while another employee acknowledged staff there had grown “too comfortable.”

Three employees were disciplined in the case of the boys who engaged in oral sex at the Des Plaines shelter, known as Casa Guadalupe. The boys were tested for sexually transmitted diseases and one was transferred to another shelter. The oldest boy was 15 and one of the other two was 11, with a history of trauma and abuse, but it is unclear which boy he was. Records did not include the age of the third boy.

Heartland Human Care Services — the division of Heartland Alliance that cares for about 3,000 detained children a year — has largely operated under the radar. Even those living next door to Heartland shelters are often unaware who the children are.

But Heartland, a 130-year-old nonprofit human rights organization and Illinois’ largest caretaker of immigrant minors detained after crossing into the United States, has faced increased scrutiny in recent weeks after it began housing children who were forcibly separated from their parents under the Trump administration’s zero tolerance crackdown.

Since fiscal year 2015, Heartland has received more federal money than all but three organizations that contract with the federal government to house immigrant children detained by the government. The shelters are overseen by the U.S. Health and Human Services department’s Office of Refugee Resettlement.

Heartland officials have said ORR officials provide regular oversight, from conducting weekly meetings with staff to visiting the shelters on a routine basis. ORR has not responded to a ProPublica Illinois public records request.

The newly obtained documents shed more light on some of the trouble inside the Heartland shelters in recent years. They also mirror the findings of a separate ProPublica investigation last week that revealed hundreds of allegations of sexual offenses, fights and missing children at the more than 100 shelters for immigrant children across the country.

Heartland officials declined to address specific incidents, saying doing so would compromise the privacy of children. They said the incidents “represent highly rare occasions” and that while employees are well-trained and dedicated, they “are human beings taking care of human beings.” They said they take “swift and appropriate action” and report all incidents to state and federal authorities.

“If the goal is to call into question the quality of care that we are providing by releasing sensitive information about minor children without context, and using that as if it defines our work, then that’s a shame,” Heartland said in a statement to ProPublica Illinois. “During the five-year time period you reviewed, we cared for more than 15,000 children.”

Heartland opened its first shelter for unaccompanied minors more than 20 years ago, and now runs nine shelters in and around Chicago, housing up to 500 children at a time. Five sites operate in Chicago, including a converted nursing home in Bronzeville that can shelter up to 250 children. Heartland also houses children in suburban Des Plaines in four cottages called Casa Guadalupe on the campus of Maryville Academy, a nonprofit Catholic child welfare agency.

Some of the most concerning recent allegations, detailed in news reports and a pending lawsuit, involve Casa Guadalupe. Heartland announced this week that the organization concluded its own investigation into allegations of abuse and neglect made by several children housed there in recent months, including that an employee injected a child with a sedative. It said it found no evidence to support the claims. DCFS and federal authorities continue to investigate.

Current and former employees say problems exist. A current worker at Casa Guadalupe told ProPublica Illinois this week that children are neglected because of insufficient staffing. The worker, who asked not to be identified for fear of retaliation, said two employees are sometimes expected to supervise as many as 32 children at a time — in addition to performing other duties such as laundry, or preparing and serving meals.

“If I have to do things that are not in my job description, then those children are going to be left alone sometimes,” the worker said in an interview. “If you don’t have enough staff to take care of the kids, that’s negligence.”

A lack of supervision has resulted in accidents, and some of the youngest children at the shelters — those under the age of 5 — have gone days days without bathing, the employee said.

A federal lawsuit filed last month against Heartland alleges the agency was negligent in caring for an 11-year-old boy from Guatemala who fell into a metal bed frame and required three staples in his head.

Heartland has said it found no evidence of negligence.

Organization officials said they employ about 500 staff members across the nine shelters and in recent years have hired additional staff to meet new federal guidelines.

“We have high standards for staff members who are providing shelter and care for the children. If we find that our policies, practices and/or standards of care are not being followed, we take immediate action,” Heartland said in a statement.

Heartland has faced questions of inadequate supervision in the past, too, according to the newly obtained documents.

At Heartland’s largest shelter, in Bronzeville, a 27-year-old female employee had an alleged “inappropriate relationship” in 2015 with a 17-year-old boy from El Salvador, according to DCFS and Chicago police reports. The boy was housed at the shelter for about two months and, as he was preparing to leave to live with an aunt in Texas, staff noticed that he had “marks/bruises” on his neck, records show. A police report describes the mark as a hickey.

Workers at the facility, called the International Children’s Crisis Center, found letters with his belongings that detailed a sexual relationship between the staff member and the teen and included the employee’s phone number. One letter said the two had “made love,” according to a police report. The letters included the drawing of hearts over the ‘I’s, according to a disciplinary report.

Although the worker initially admitted to the relationship, DCFS reports say, she denied it after being fired and hiring a lawyer. According to DCFS records, the employee denied writing the letters, though they were in the same handwriting she used on company forms. She also denied staying in the boy’s room for an extended period of time, though video shows her entering his room and staying for about 45 minutes.

The teen also denied there was a relationship, according to DCFS. But according to a police report, the teen told an investigator they had kissed.

Heartland declined to answer questions about the incident.

Heartland said it is “incredibly rare” for children to run away, and that no children they cared for who had been separated from their parents ran away this spring and summer.

Two girls at the Bronzeville facility ran away while on a field trip to the Museum of Science and Industry in March 2016. One had been assigned a staff member to individually watch her after being put on a “safety plan” just a few weeks earlier because she had been cutting herself.

Yet there were only two staff members on the museum trip, one of whom was the driver, to supervise 10 girls. It was spring break and the museum was crowded. When staff became distracted by an admissions ticket issue, one girl turned to another, said, “Take care of yourself,” and sprinted off, according to DCFS interviews.

The second girl ran after her but was quickly located.

Seven Heartland employees searched in and around the museum for the first girl, including at local businesses and train stations, and distributed pictures of her, though it’s unclear if she was found. When asked the cases of runaways and if they were ever found, Heartland declined comment.

After the incident, Heartland instituted new field trip policies for the Bronzeville facility that required staff members to be assigned to watch specific children, a security worker to attend and the children to be counted every 15 minutes.

Seven children have run away since December 2014 from one of the Heartland shelters in Rogers Park, DCFS and police records show. It’s unclear how many were found, but police reports show that in two separate incidents, boys were located and arrested in the suburbs. One of the boys was turned over to immigration authorities. The second boy was jailed in Kane County.

Among the cases, a 16-year-old boy jumped a fence in April 2017 while children were playing soccer in the small backyard of the brick house, which is surrounded by a fence and netting.

Video shows the boy darted for the fence after one of the other children had a “crisis” at the start of recreation time, according to records. The child who took off had also tried to run away from Casa Guadalupe a few weeks earlier.

Heartland wrote up four employees for “lack of monitoring” and not following procedures.

DCFS noted that while there were enough employees to handle the number of children, they did not have a plan before taking the children outside. They had also failed to assign each employee a specific number of children to monitor while outside, despite Heartland’s policy to do so. These steps, DCFS concluded, could have prevented the boy from running away.

At Heartland’s Englewood shelter, a nondescript home on the city’s South Side, a 2015 DCFS inspection report cited an “incident” from the previous July that prompted the installation of safer doors. More detailed state records could not be immediately obtained, and there are no police records from that incident.

But a former employee at that shelter gave an account of what happened.

“A 4-year-old girl walked out the front door and wandered around the neighborhood calling for her mother,” the former employee said. “A neighbor saw her and walked her back to the shelter.”

Do you have a tip about something we should be investigating? Do you have documents or other materials that we should see? We want to hear from you — and you can contact us safely, securely and anonymously if you prefer.